Snap Poll: Is a Soccer Scandal More Scandalous If It Involves Putin?

We asked scholars about the FIFA indictments, how Europe is managing its migration crisis, and if it's time to give up on Greece.

Despite the ongoing war against the Islamic State, the civil wars raging in Yemen and Syria, and continuing negotiations on a nuclear deal with Iran, international news has been dominated by other issues, like the politics of soccer, migration, trade, and monetary policy. The latest Snap Poll of international relations (IR) scholars, conducted by the Teaching, Research, and International Policy (TRIP) project at the College of William & Mary, in collaboration with Foreign Policy, asked IR scholars what they think about these wide-ranging international issues in the news. This poll is the sixth in the series and includes responses from 655 of all 4,904 IR scholars at colleges and universities throughout the United States. (Read the complete TRIP Snap Poll results here.)

The politics of soccer scandals

Despite the ongoing war against the Islamic State, the civil wars raging in Yemen and Syria, and continuing negotiations on a nuclear deal with Iran, international news has been dominated by other issues, like the politics of soccer, migration, trade, and monetary policy. The latest Snap Poll of international relations (IR) scholars, conducted by the Teaching, Research, and International Policy (TRIP) project at the College of William & Mary, in collaboration with Foreign Policy, asked IR scholars what they think about these wide-ranging international issues in the news. This poll is the sixth in the series and includes responses from 655 of all 4,904 IR scholars at colleges and universities throughout the United States. (Read the complete TRIP Snap Poll results here.)

The politics of soccer scandals

Crisis rocked soccer’s international governing body in recent weeks with the United States filing charges of fraud, bribery, and money laundering against FIFA officials. Recriminations followed the indictments, including charges from Russian President Vladimir Putin that the United States was playing politics with soccer. The Russian leader accused the United States of interfering, saying that: “This is yet another blatant attempt [by the United States] to extend its jurisdiction to other states.”

It’s a good thing Putin doesn’t speak for IR scholars. Snap poll respondents overwhelmingly supported the indictments by the U.S. Justice Department. But how we framed the question mattered.

The other two variations on the question elicited smaller and very similar changes in the responses. One group of respondents was primed for the question with the information that Putin had criticized U.S. action. Among these IR scholars, 30 percent still supported and 49 percent strongly supported the indictments. In the final group, respondents were reminded that, on the day before the indictments, U.S. Senators John McCain (R) and Robert Menendez (D) had criticized FIFA’s plan to hold the 2018 World Cup in Russia because of that country’s continued involvement in Ukraine. Like the news of Putin’s reproach, information about the senators’ statement did little to sway respondents. IR scholars backed the indictments only slightly less stalwartly: 36 percent supported U.S. actions, while another 47 percent strongly supported them. 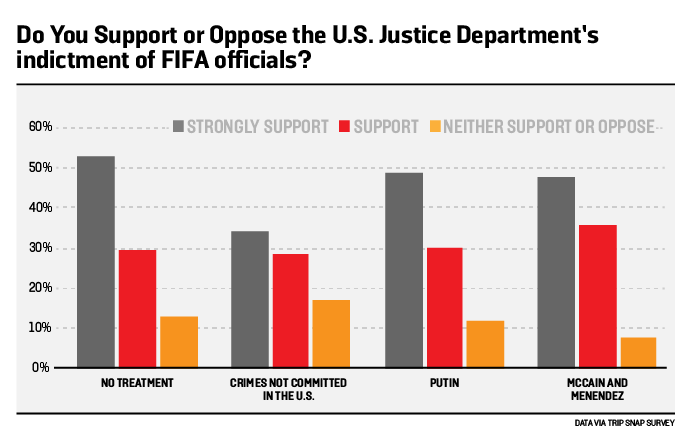 In yet another layer of the conversation on the FIFA scandal, there’s now a question among many analysts and Western politicians about whether or not the next host countries of the World Cup — Russia and Qatar — still deserve the honor. Many who raise this question worry that Russia and Qatar — countries with poor human rights records and reportedly less-than-exceptional bids — may have been shown favor by corrupt former FIFA leaders. Those who felt that the FIFA indictments were politically motivated, like Putin and former FIFA President Sepp Blatter, have suggested that the World Cup venue questions instead are a way to punish the selected hosts. 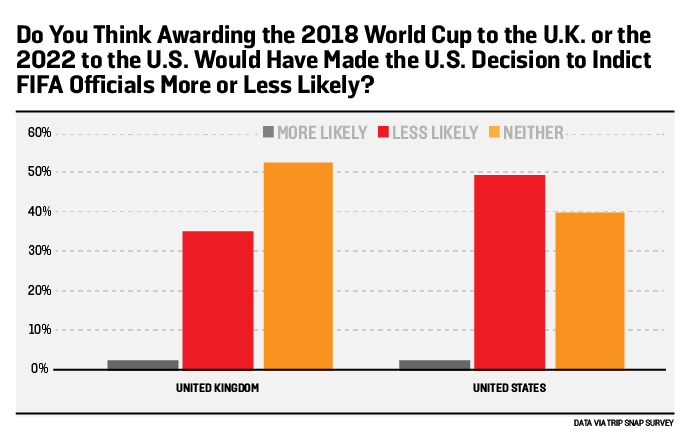 Without naming a specific alternative World Cup host, we asked the other half of our sample about how Russia or Qatar winning their bids for the World Cup affected the U.S. decision to indict. A majority of scholars reported that there was no connection between the two. Still, more than a third of respondents in both cases believe that awarding the World Cup to Russia and/or Qatar made the U.S. decision to indict soccer officials at least somewhat more likely. 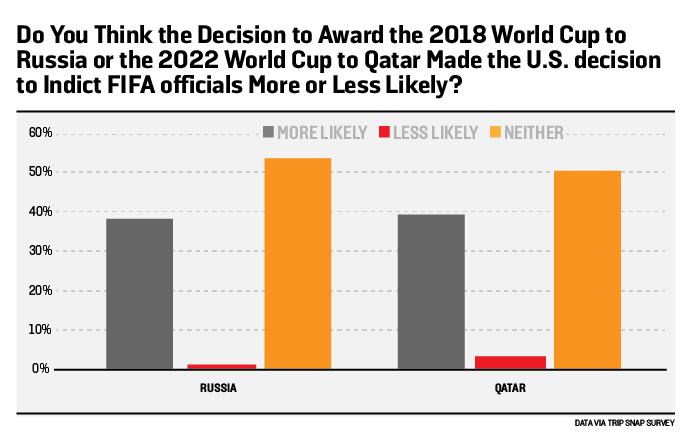 Will Europe sink or swim on migration?

The recent surge in migrants desperate to reach European shores has produced a rising death toll, and many hundreds of migrants adrift at sea seeking refuge, and political disagreement about how best to respond to the growing crisis. The United Nations High Commission on Refugees estimates that, by late April, more than 3,000 migrants had died in 2015 or were then missing at sea. Earlier this month, we saw a new surge in refugees attempting the dangerous crossing of the Mediterranean to Europe.

The increased flow of refugees and other migrants fleeing war and poverty in Africa and the Middle East follows a European economic crisis characterized by high levels of unemployment, suspicion of foreign workers, and decreased funding for sea patrols and rescues. In October 2014 Joyce Anelay of the British Foreign Office voiced an opinion shared by many Europeans, when she wrote, “We do not support planned search-and-rescue operations in the Mediterranean.” They are “an unintended ‘pull factor,’ encouraging more migrants to attempt the dangerous sea crossing and thereby leading to more tragic and unnecessary deaths.”

Most IR scholars disagree. Well over half of the faculty surveyed said that conducting search-and-rescue operations for migrants traveling in international waters had no effect on future migration flows. Still, nearly 30 percent agree with the British Foreign Office and many others in Europe that patrols encourage more migrants to try to gain access to Europe. 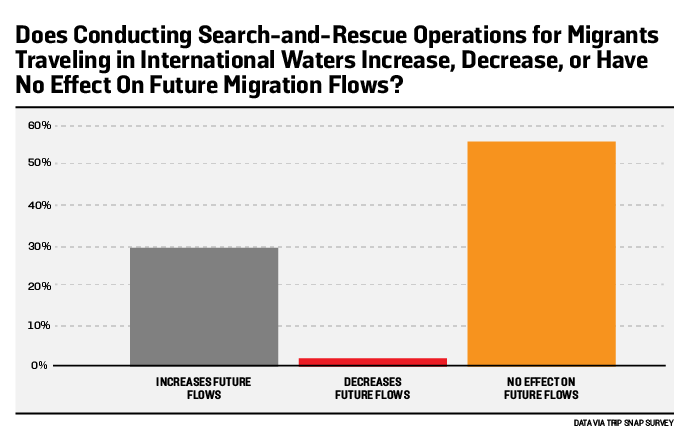 The IR experts also caution European powers about the consequences of continued disagreement over migration: 58 percent of respondents said that political disagreement among EU states over migration policy will hurt the credibility of the Common Foreign and Security Policy.

Giving up on Greece?

In the wake of its second missed payment to the IMF, Greece may be inching closer to an ignominious withdrawal from the eurozone. With a large payment due at the end of this month, many people are growing increasingly skeptical about Greece’s prospects. In a Bloomberg poll conducted in mid-April, 52 percent of respondents said Athens would leave the euro, compared with 31 percent in mid-January.

IR scholars have also grown more pessimistic over time. In our March 2015 snap poll, 76 percent said that Greece would still be using the euro this time next year. By late May, in the current poll, that number had slipped to 64 percent. The experts definitely don’t think an exit is a good thing for Greece: only 28 percent believe that Greece would be better off if it stopped using the euro as its currency.

Some IR scholars clearly are more optimistic than others about Greece’s prospects. Students of international political economy have become less optimistic over time. Sixty-five percent believe that Greece still will be using the euro in a year, but this number is down from 77 percent in March.

Those scholars who teach and conduct research on Western Europe and Russia were among the most positive in March, with 90 and 84 percent, respectively, predicting that Greece would still be using the euro a year later. Now, they are some of the most skeptical with only 63 percent of those studying Western Europe and 57 percent who study the Former Soviet Union believing Greece will stay on the euro.

This surprisingly fast change of heart by the IR scholars who study Europe joins a number of other unexpected findings in our most recent snap poll: IR scholars don’t share the belief that rescuing migrants at sea will embolden other refugees to make the journey. And, though they support the FIFA indictments, IR experts worry that the United States may be playing politics with soccer.

Daniel Maliniak is a Ph.D. candidate in political science at the University of California, San Diego.

Susan Peterson is the Wendy and Emery Reves professor of government and international relations and the chair of the Department of Government at the College of William & Mary.

Ryan Powers is an assistant professor of international affairs in the School of Public and International Affairs at the University of Georgia. Twitter: @rmpowers

Women Are the Key to Israel’s Government

Women Are the Key to Israel’s Government