Five years into Syria's civil war, the number of refugees has surpassed 4 million.

Five years into Syria’s bloody civil war, the total number of refugees fleeing the country has set a grim new record, surpassing 4 million for the first time since the conflict began.

And as Europe groans about its growing migration numbers, Turkey and Lebanon are the countries really bearing the brunt of the crisis, according to a new report from the U.N.’s refugee agency, with each housing well over a million refugees from Syria alone. Jordan, according to the data, houses 629,000 more, seriously straining the country’s budget and threatening the stability of its government.

The contrast with the refugee crisis in Europe, which is receiving enormous amounts of public attention, is very striking. In the last six months, Greece, for example, received 68,000 migrants on its shores — many of whom are Syrian — as the country surpassed Italy for the title of Europe’s No. 1 recipient of refugees. But Turkey, already the world’s largest refugee holder, now harbors 45 percent of all Syrian refugees left in the region, with 1.8 million seeking shelter inside its increasingly crowded borders. 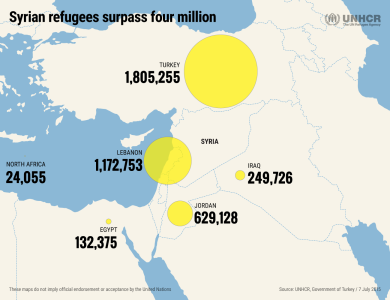 A quarter of the four million refugees fleeing Syria left the country in the last ten months alone, but the report says funding for the crisis continues to fall short.  As of late June, the agency was working with only 24 percent of the estimated $5.5 billion it will need for humanitarian and development aid this year.

“This is the biggest refugee population from a single conflict in a generation,” said U.N. High Commissioner for Refugees António Guterres. “It is a population that deserves the support of the world but is instead living in dire conditions and sinking deeper into abject poverty.”

In Lebanon, 55 percent of the country’s nearly 1.2 million refugees live in sub-standard shelters, and in Jordan, 86 percent are living below the poverty line on less than $3.20 a day.

As desperation has increased, so too have the practices of child labor and child marriage. The length of the conflict has all but destroyed any hopes of going home, where an additional 7.6 million are displaced within Syria’s borders. But without adequate shelter, food, or financial opportunities, many Syrians see their squalid conditions in crowded Middle Eastern camps as reason to make secondary movements to North Africa or Europe.

Many of those traveling to Europe are doing so by making a dangerous, and often perilous, voyage by sea. More than 1,300 drowned on the maritime journey to Europe in April alone, and many of those who reached Europe’s shores proved not to be men looking for work but unaccompanied children seeking asylum.

And there are no signs the flood of refugees will abate anytime soon.

The U.N. suspects more than 250,000 will flee the country by the end of the year, as Syrians become the largest refugee population from a single crisis in the last 25 years.