Don't listen to the inevitable naysayers right now — there's a decade of juicy "leaks" about Iranian malfeasance to come.

I woke up at 3:30 a.m. here in California. I should have gone back to sleep, but I couldn’t help myself. I peeked at my phone, and there it was: the full text of the Joint Comprehensive Plan of Action, the nuclear deal between Iran and the six world powers known variously as the P5+1 or the E3/EU+3.

Admittedly, it was the version released by the Russian Ministry of Foreign Affairs, which was badly formatted. Bleary eyed and coffee deprived — I didn’t want to wake the kids — I read through the whole damn thing. And I liked what I found.

It was really boring, but in a good way. The deal — can we call it the “Vienna Plan,” please? — looks pretty much like the framework deal that was reached in Lausanne in April. I went through the documents, including the White House fact sheet, as well as my own notes from conversations with administration officials. It would seem that the agreement is as good or better in all important respects than what officials described in the spring.

The reduction in centrifuges remains substantial — the limits are the same as those reported when the framework was announced. Moreover, little worries I had, like whether Iran would agree to remove piping and other infrastructure along with the centrifuges themselves, were resolved favorably.

The Vienna Plan also provides a path to resolve the outstanding issues with the International Atomic Energy Agency regarding Iran’s past covert nuclear weapons program (known delicately as “possible military dimensions”) and provides a public description of something U.S. officials had only described in private — a R&D schedule that limits Iran’s development of new centrifuges over the next eight to 10 years.

And, if like me you think “breakout,” or the time it would take to turn nuclear material into one bomb, is a dumb measure, the agreement also has lots of provisions to deal with “sneak-out,” or an attempt to get a bomb covertly. These provisions include granting inspectors access to military sites and monitoring of centrifuge workshops and uranium mines. But this shouldn’t be a surprise: It was in the bag in Lausanne.

It is worth looking at this chart issued by the Supreme Leader’s office showing all his “red lines” in the talks. It turns out the Iranians gave in on several of them and found rather creative solutions to a few others. You can make your own list, but I think they compromised on (1, 3, 5, 7, 8, and 9): 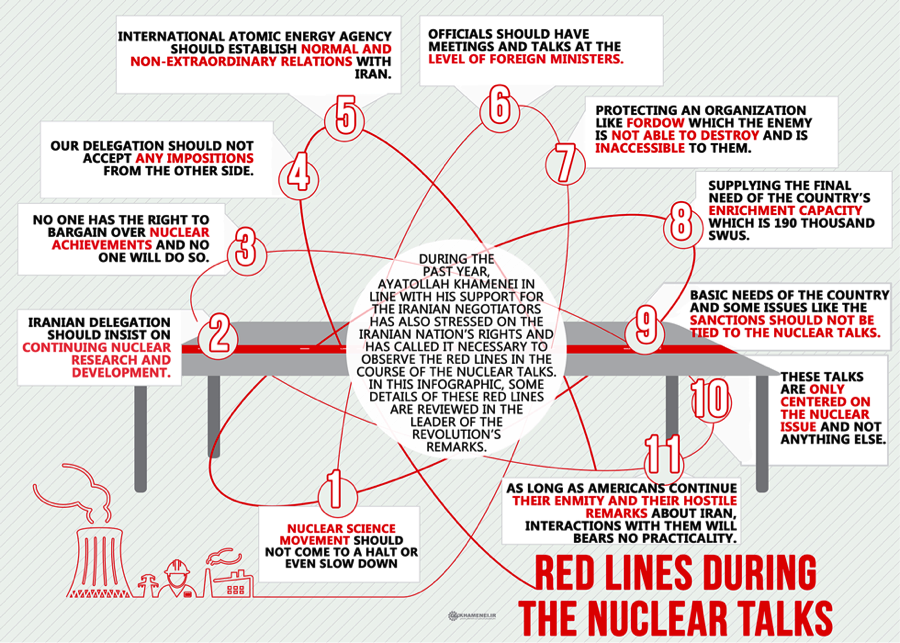 What had to be resolved in Vienna was the tricky issue of sanctions. It was always clear that there would have to be an implementation period so that Iran could say sanctions came off “immediately” while the United States could claim the opposite.

One story said the administration was going to back off what looked like a hard cap on how much enriched uranium Iran could have at any one time. I called it the Great LEU Panic of June 2015. Sure enough, Iran is limited to “300 kg of up to 3.67% enriched UF6 (or the equivalent in different chemical forms).” The rest of Iran’s stockpile must be sold or diluted. I told you so.

The real issues in Vienna were how to re-impose sanctions if the deal collapsed, as well whether to lift the United Nations’ arms embargo and the sanctions on Iran’s missile programs.

The mechanism to re-impose sanctions — called “snapback” by people who don’t wear baseball caps — is pretty clever. Any of the parties can raise an issue within a Joint Commission created to administer the agreement. If the party is unsatisfied, it then can notify the U.N. Security Council. The Security Council has 30 days to act — and if it does nothing, the sanctions are automatically re-imposed. That gives the United States and other parties the ability to blow up the deal and return to sanctions regime with no chance for Russia or China to veto.

The arms embargo and missile sanctions were trickier. The Iranians argued that those were only imposed as punishment for nuclear activities — and that they should come off as part of any deal. It’s a fair point, but rather too lawyerly for the situation. Iran’s missile program was part of the possible military dimensions to its nuclear program. And Iran is also engaged in several proxy wars in Middle East at the moment. One of the main reasons for being concerned about Iran’s past nuclear weapons work is how aggressive a nuclear-armed Iran might become. It should have been obvious to anyone in Tehran that the United States wasn’t going to agree to a flood of new arms and missile technologies.

The compromise, again, was obvious. U.N. sanctions will come off over time — reportedly five years in the case of the arms embargo and eight years in terms of the missile program — but national and other international restrictions stay. President Barack Obama will not waive U.S. sanctions for missile proliferation, terrorism, and human rights. Moreover, Iran remains outside the Missile Technology Control Regime, the cartel of suppliers that controls missile technologies. As a practical matter, Iran’s missile suppliers are still limited to North Korea — something already prohibited by sanctions — and entities already sanctions-busting.

That said, it probably makes sense to think about a follow-on agreement limiting Iran’s development of ballistic and cruise missiles as well as how to deal with a deteriorating regional security situation that has many U.S. allies understandably nervous. If Obama ignores these concerns, he will be handing his opponents back at home an issue that they will only too happily use to club him over the head.

Remember how House Republicans have repeatedly voted to repeal, defund, or deform the Affordable Care Act? Fought all the way to the Supreme Court, twice? The fight over the Iran deal is going to make the Obamacare battles look like two preppies slap-fighting over a cucumber sandwich.

Congress now has 60 days to review the deal and pass a resolution of disapproval that would remove the president’s authority to waive sanctions on Iran. Obama has said he will veto such a measure, if his opponents can find the votes, which will give Congress another, shorter period to attempt to override the veto.

Even if the deal survives the congressional review period, you can expect a lot of leaks.

Much of the arguments in Washington to date have focused on making the process look disorganized or chaotic. At one point, Sanger moaned on Twitter that Mozart wrote Symphony No. 36 in less time than diplomats have been in Vienna for the last round of talks. Fellow nuke wonk Alicia Dressman noted, more than a little sarcastically, that she was going to miss his “poignant observations quarantined from relevance.”

Good news, Alicia! He’s not going away. The leaks are going to shift to how Iran is doing this or that. You kids may not remember this, but more than 20 years ago the Clinton administration — yes, Hillary’s husband was president back then — struck a similar deal with North Korea to freeze its plutonium production infrastructure. Immediately the leaks began: North Korea is cheating! (North Korea probably was cheating, by the way, but just not in the ways alleged by opponents. That’s another problem with the Beltway noise-machine.)

The low point was when satellite images showed a large, underground facility under construction near a place called Kumchang-ri. Someone at the Defense Intelligence Agency decided it was a covert underground nuclear reactor — based mostly on the military unit responsible for digging. No one else thought it was a reactor because, well, it was just a hole in the ground. Not surprisingly, this got leaked to the New York Times, which ran the headline: “North Korea Site an A-Bomb Plant, U.S. Agencies Say.” (Guess who the author was?)

Never mind that it wasn’t true. One agency, singular, said that; the others were unconvinced. But when something is on page A1 of the New York Times, it becomes true. The United States negotiated access to the site, which turned out to be empty. The site was “unsuitable” for a nuclear reactor and “not well designed” for a reprocessing facility. It was kind of a mini-Iraq, but where we had the good sense not to invade.

I’ve told this story over at 38North, but the point is that the Clinton administration realized too late that they needed to reinforce the 1994 Agreed Framework with other deals, starting with North Korea’s ballistic missile program. It makes sense to start thinking now about regional security issues, including Iran’s missile program, once this deal comes under monthly attack.

It is possible that the Iranians will cheat. It is also possible that they will insist on tendentious readings of certain provisions. And, although I hate to break it to you, we might not be perfect ourselves. One of my favorite passages in the agreement is an oblique acknowledgement by the Iranians that there is no telling what sort of stunt Sen. Tom Cotton and his friends might pull. (Paragraph 26. Check it out.) Even two committed parties may find that they disagree about how to implement an agreement. That’s normal.

But there will also be a cottage industry in Washington, D.C., for the next decade dedicated to manufacturing one crisis after another to try to derail this agreement. We’ve already seen a series of press conferences by the National Council for Resistance in Iran, a.k.a. the MEK, making one allegation or another. I had to debunk one about a secret centrifuge plant that NCRI claimed was churning out LEU from the basement of the site printing national ID cards.

A colleague recently emailed me one of the regular announcements for an NCRI press conference with just the phrase, “Like clockwork.” I agreed, noting you could set your watch by these press conferences.

“I tried to do that,” she said, “but it just kept telling me that it’s time for regime change.”

What’s going to be needed to deal with this is a sense of calm, a sense of perspective, and a sense of humor. There are going to be lots of people who get red in the face, point out all the terrible things the Iranian government does, and generally make accusations quicker than they can be debunked or resolved through negotiations. It will be important to step back every now again, breathe deeply, look at how things have turned out in North Korea and Iraq and remember: This is a pretty damned good deal.