The Hipsters of Havana

With their tattoos, skateboards, and tech degrees, the country's millennials are untethered from the communist ideals of the past and ready to meet the world. 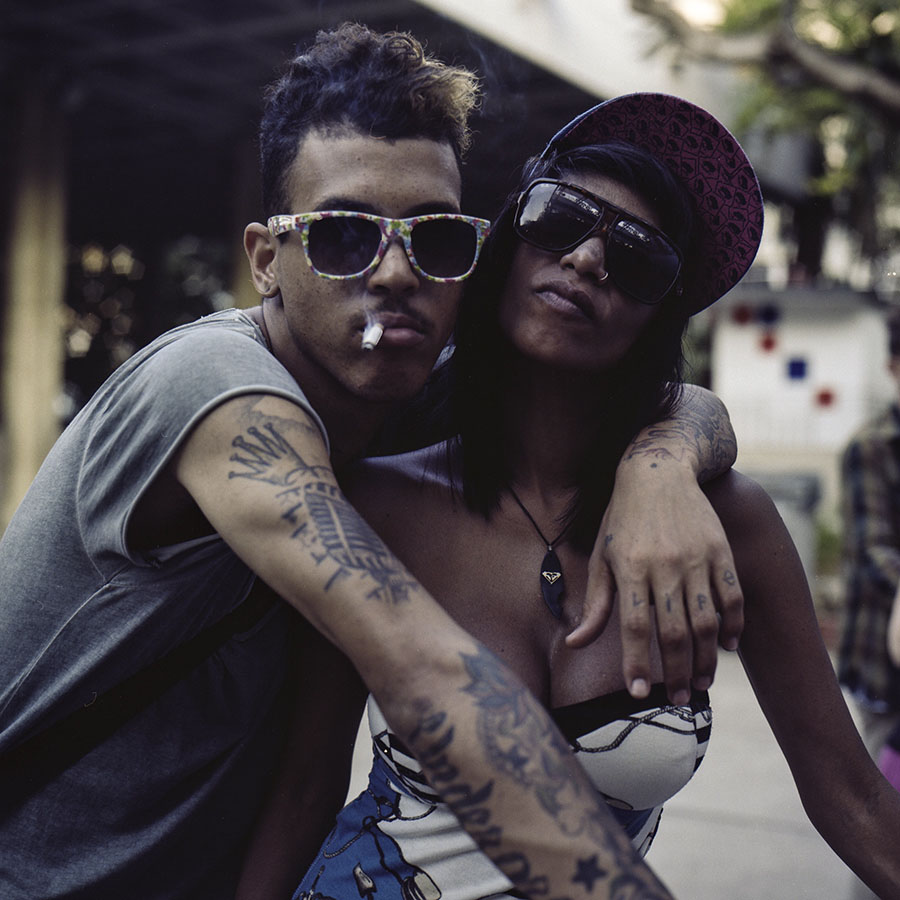 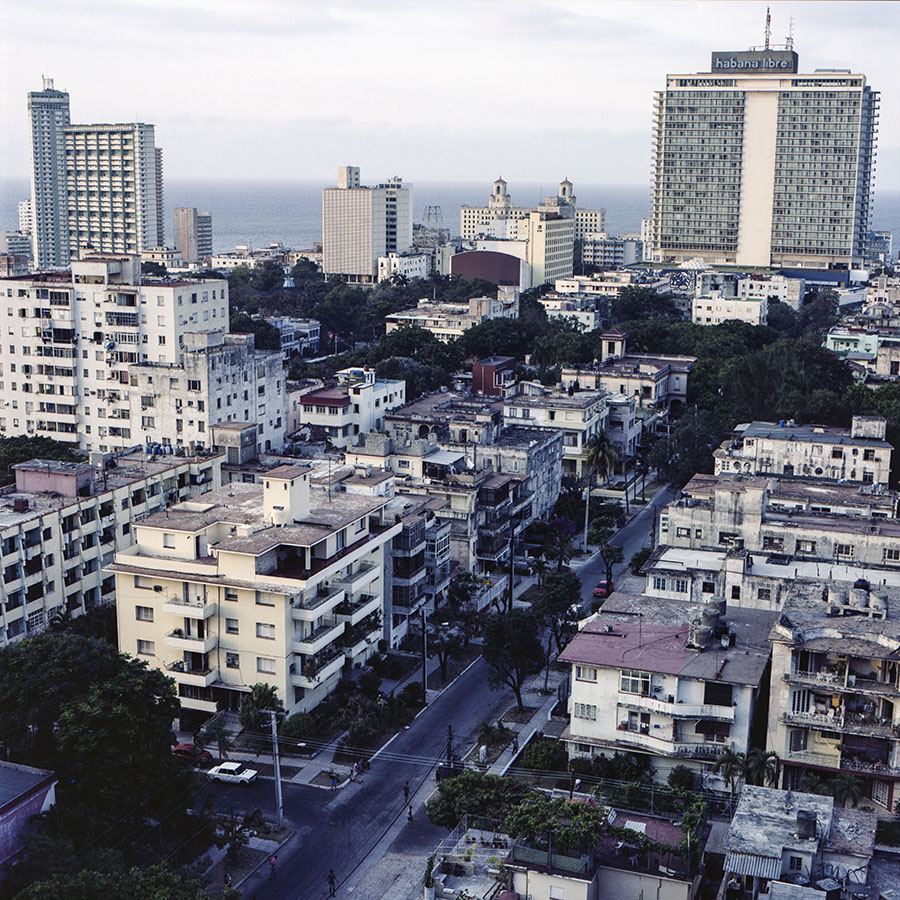 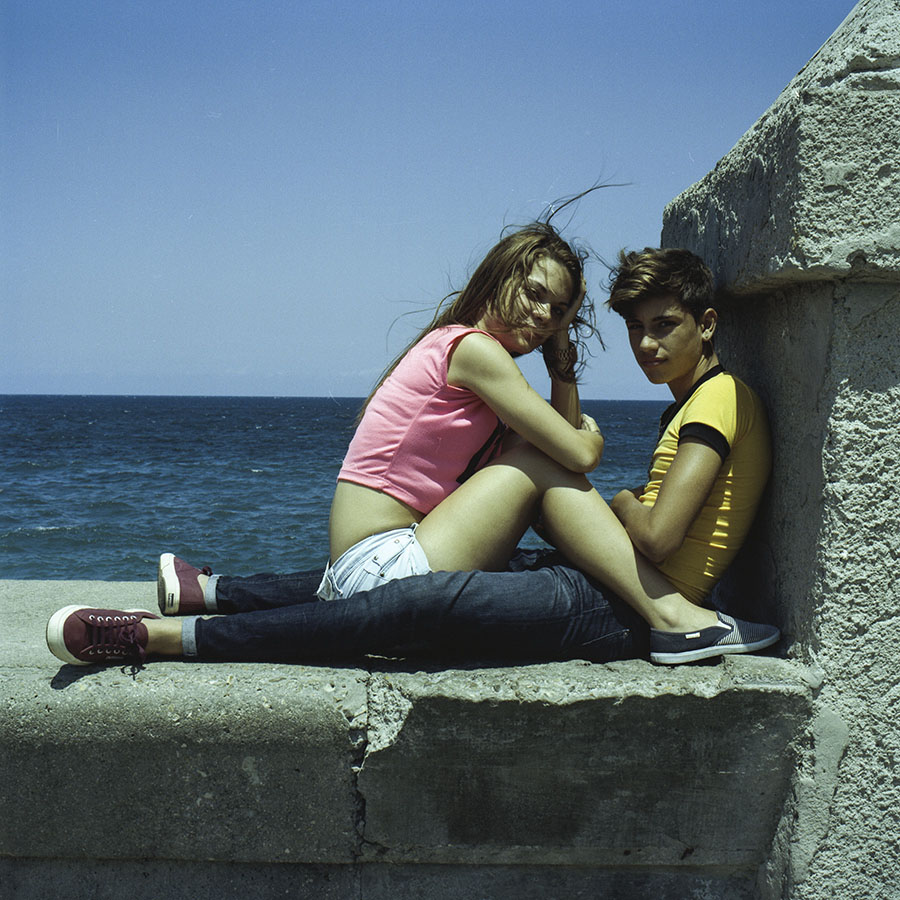 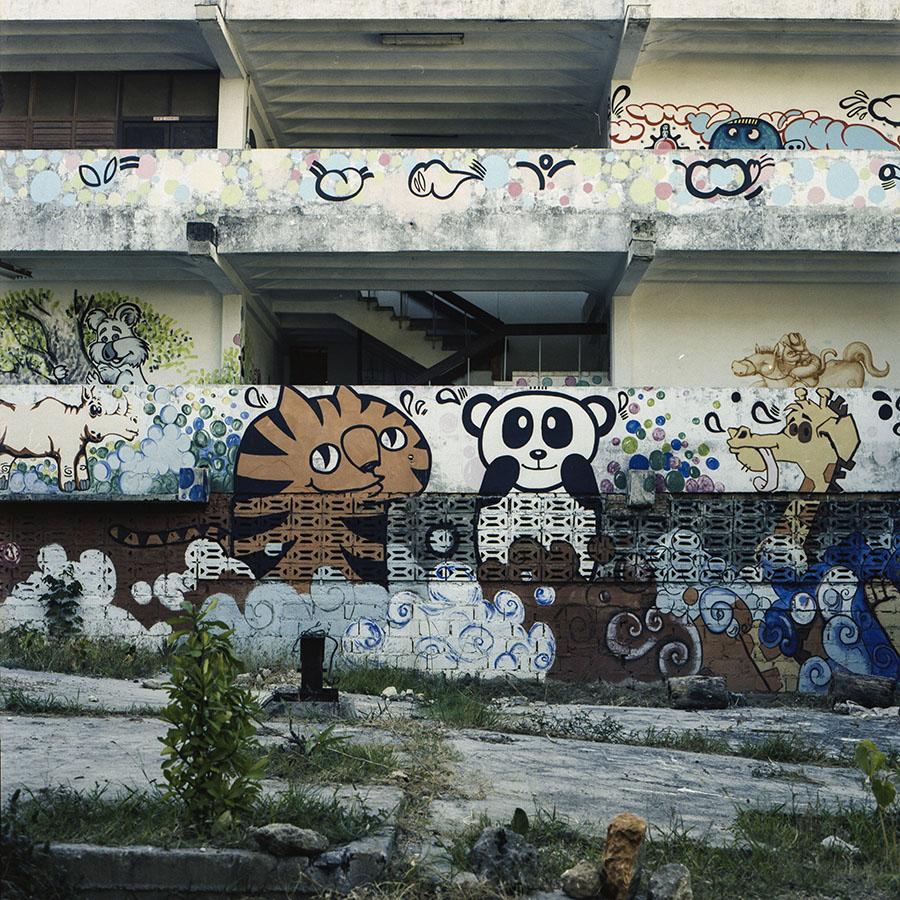 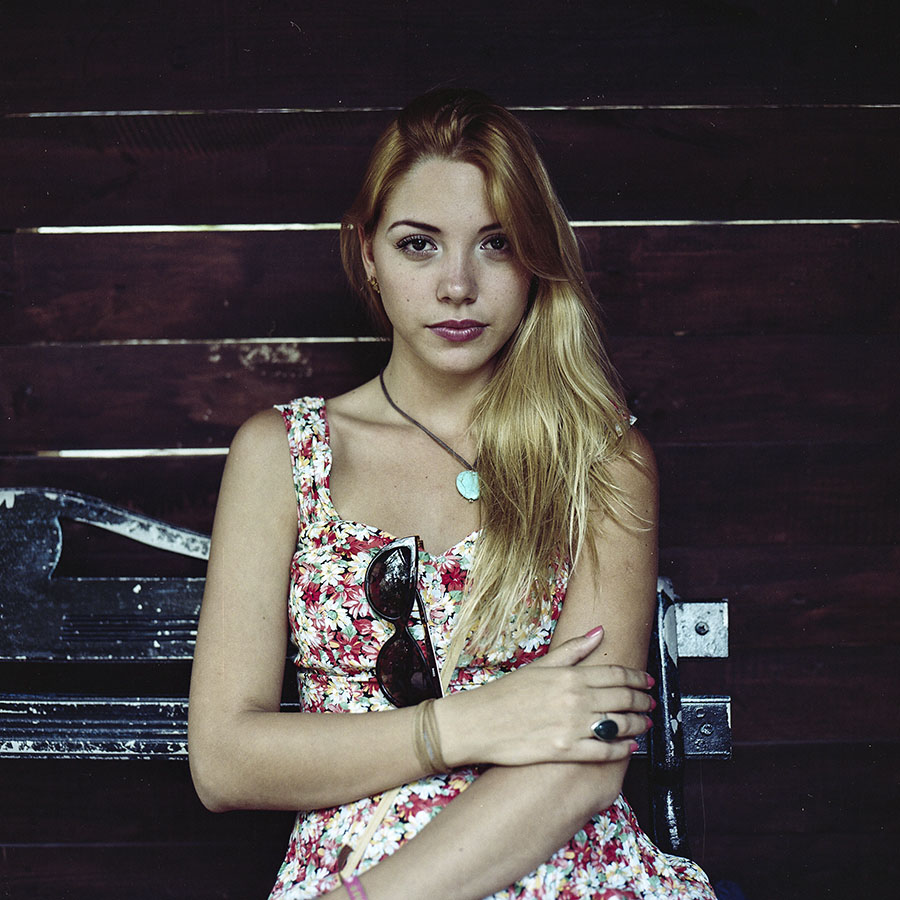 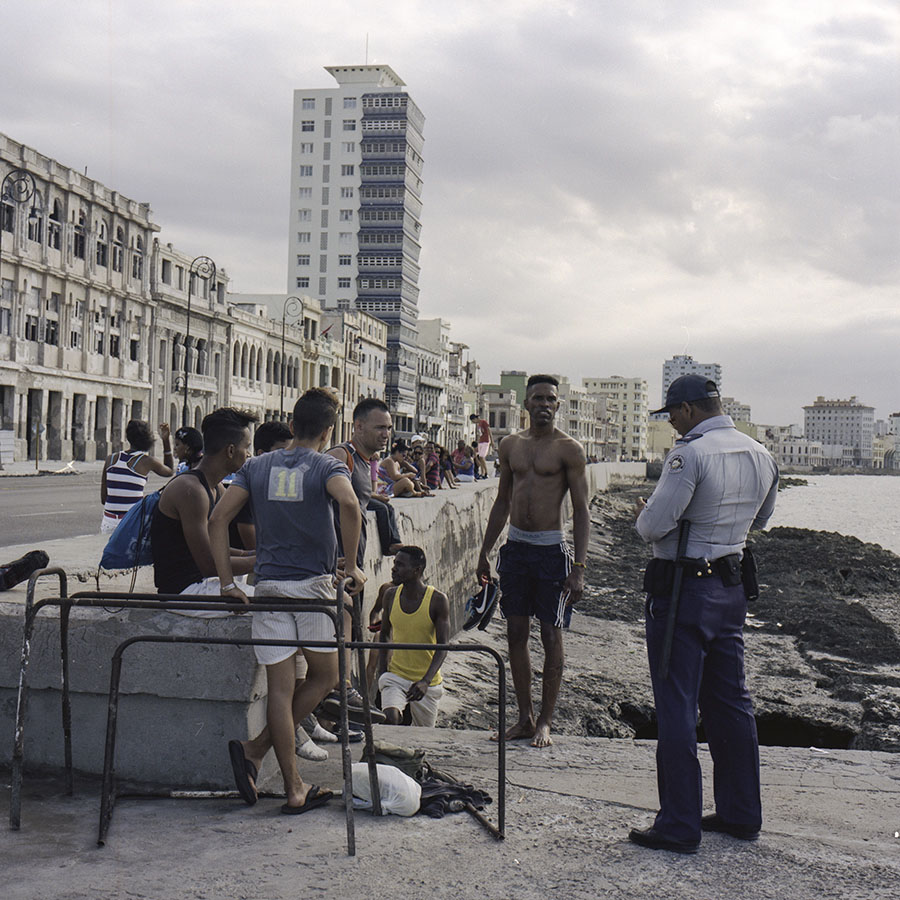 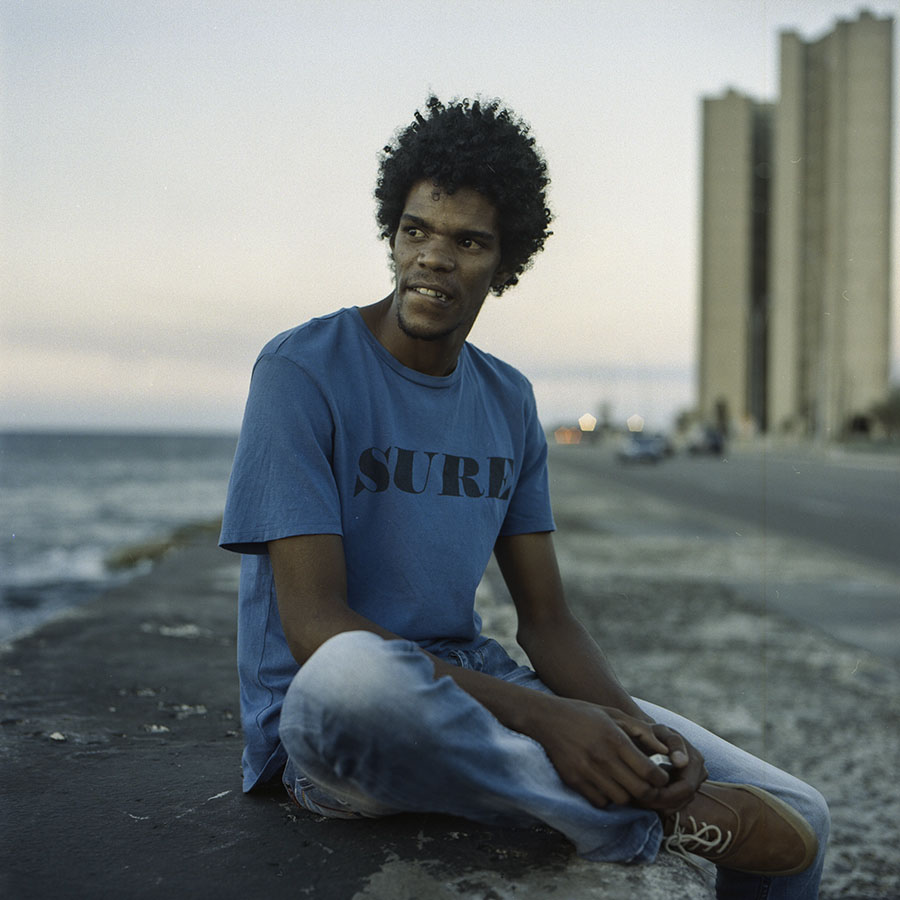 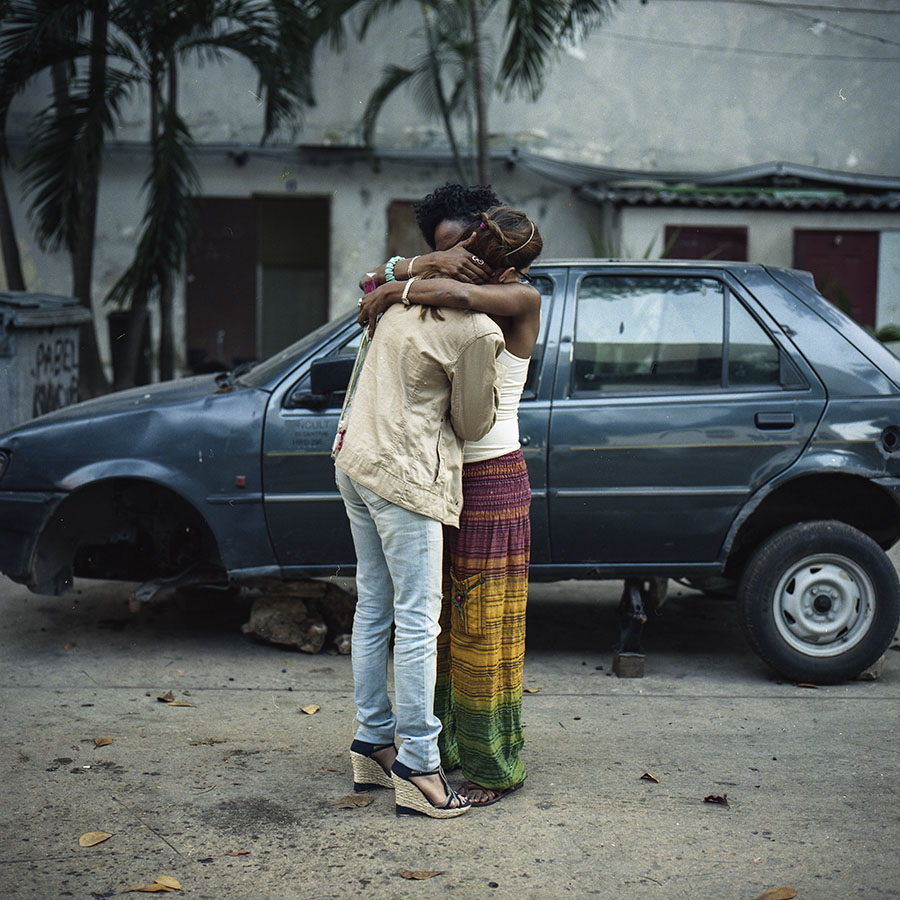 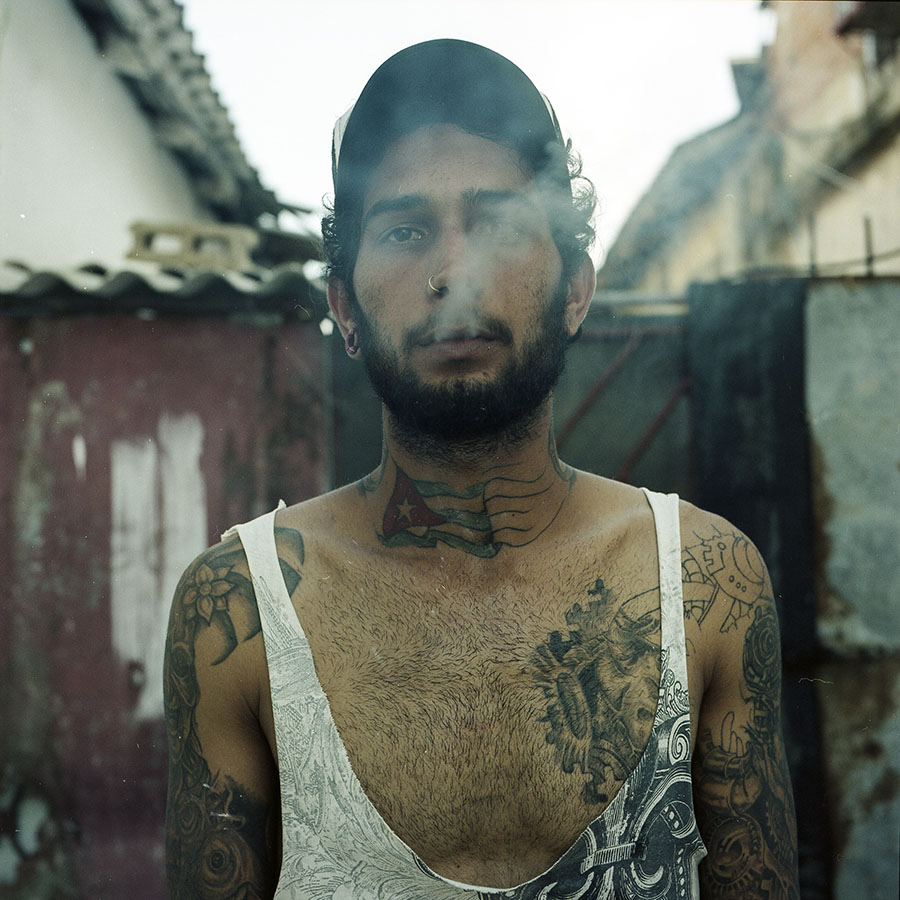 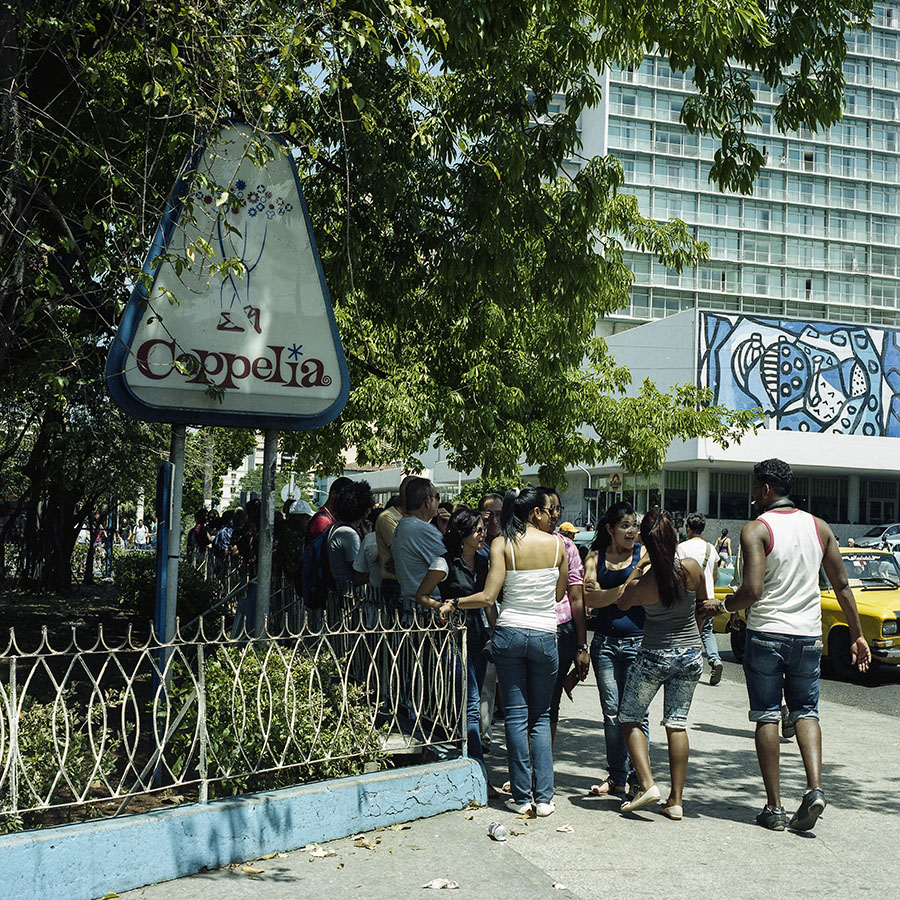 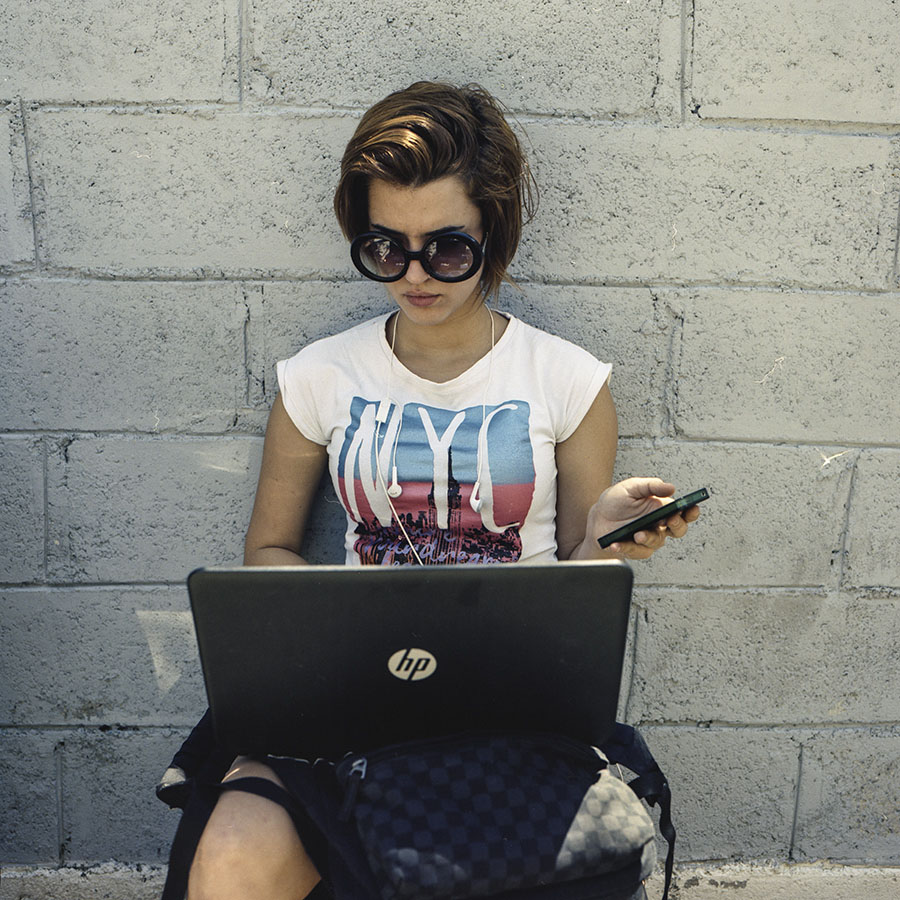 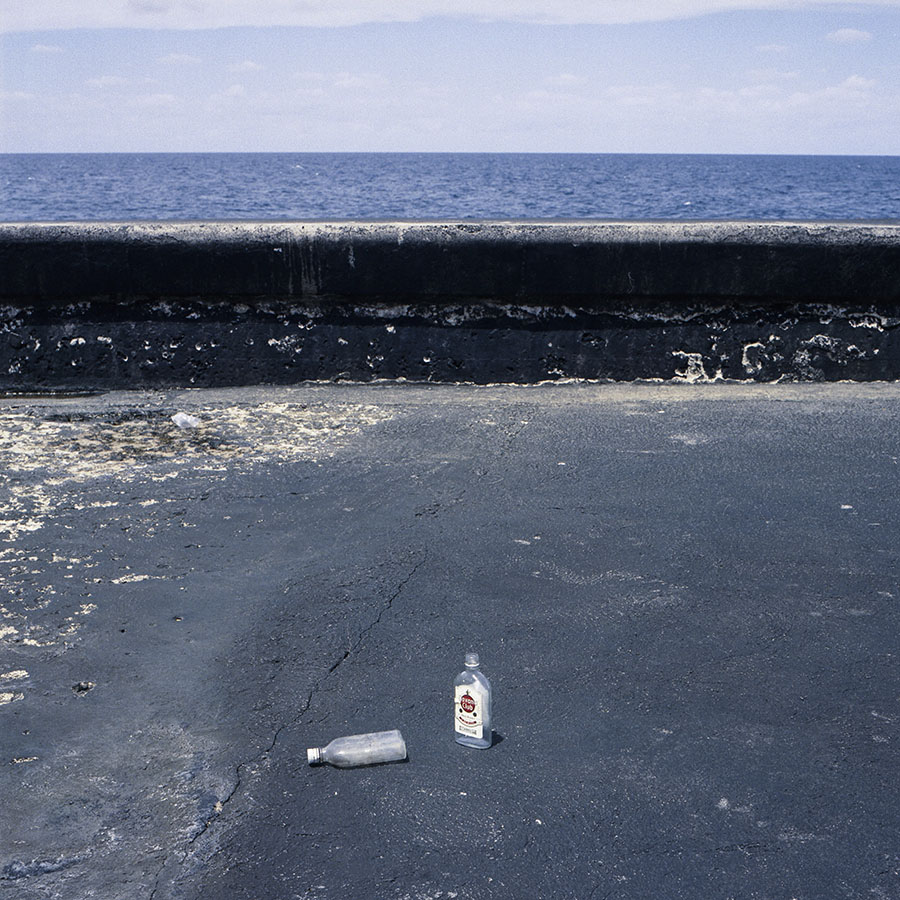 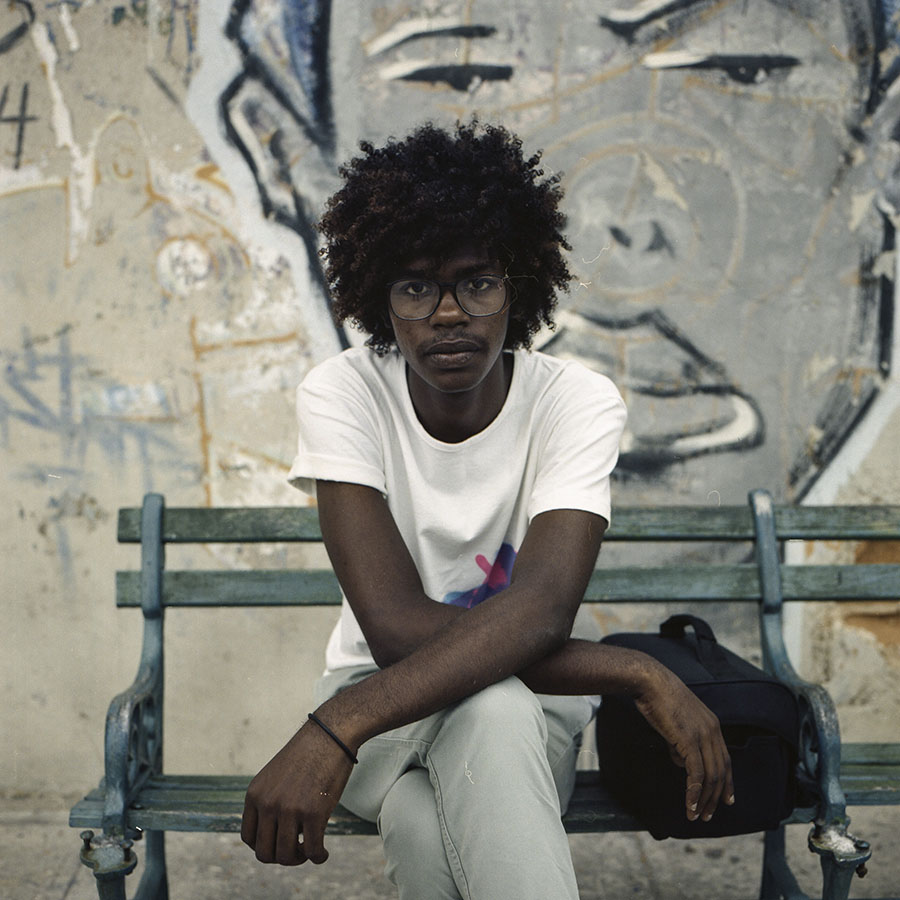 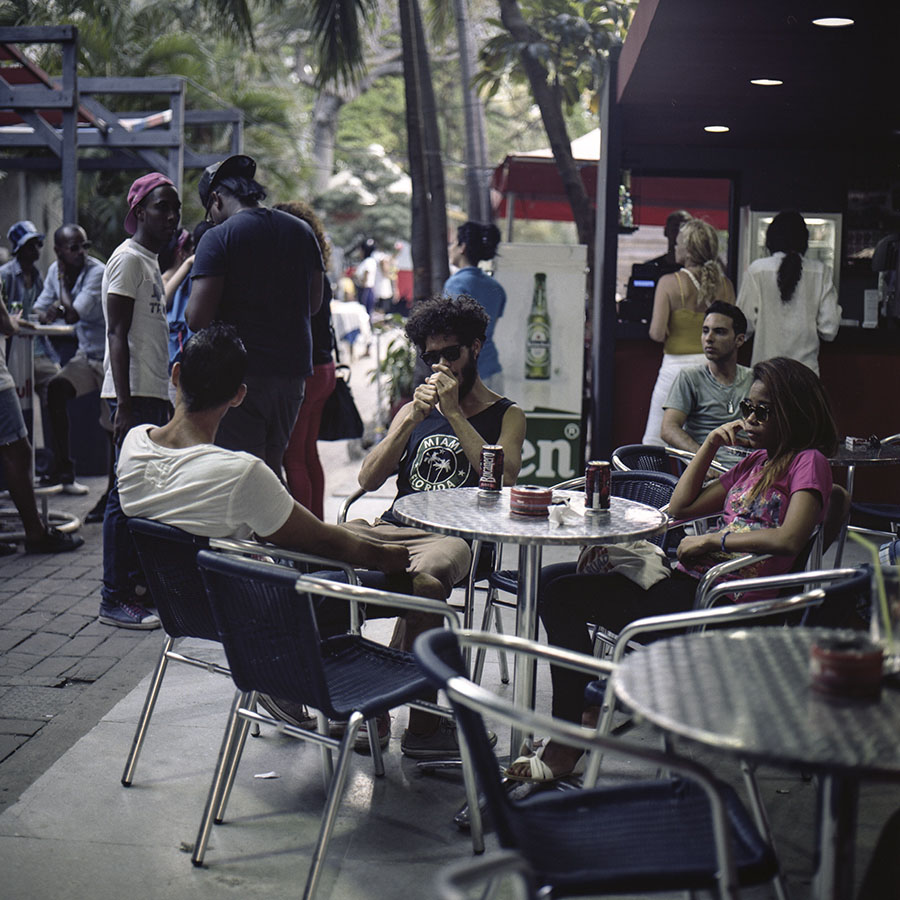 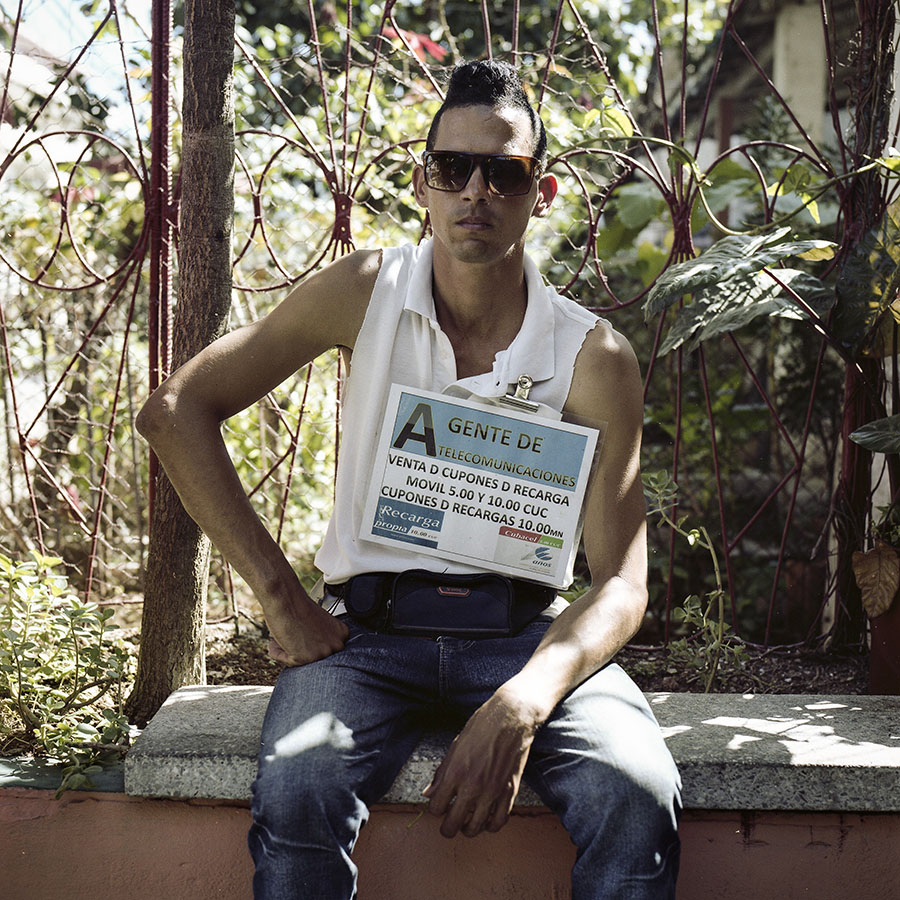 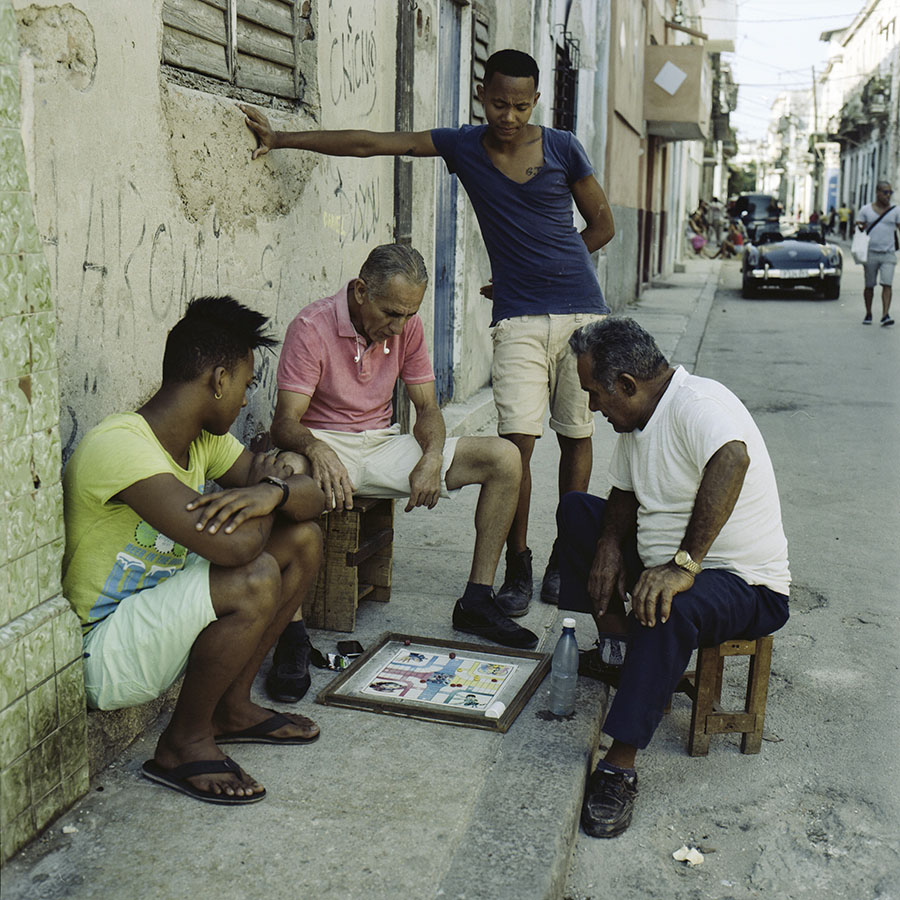 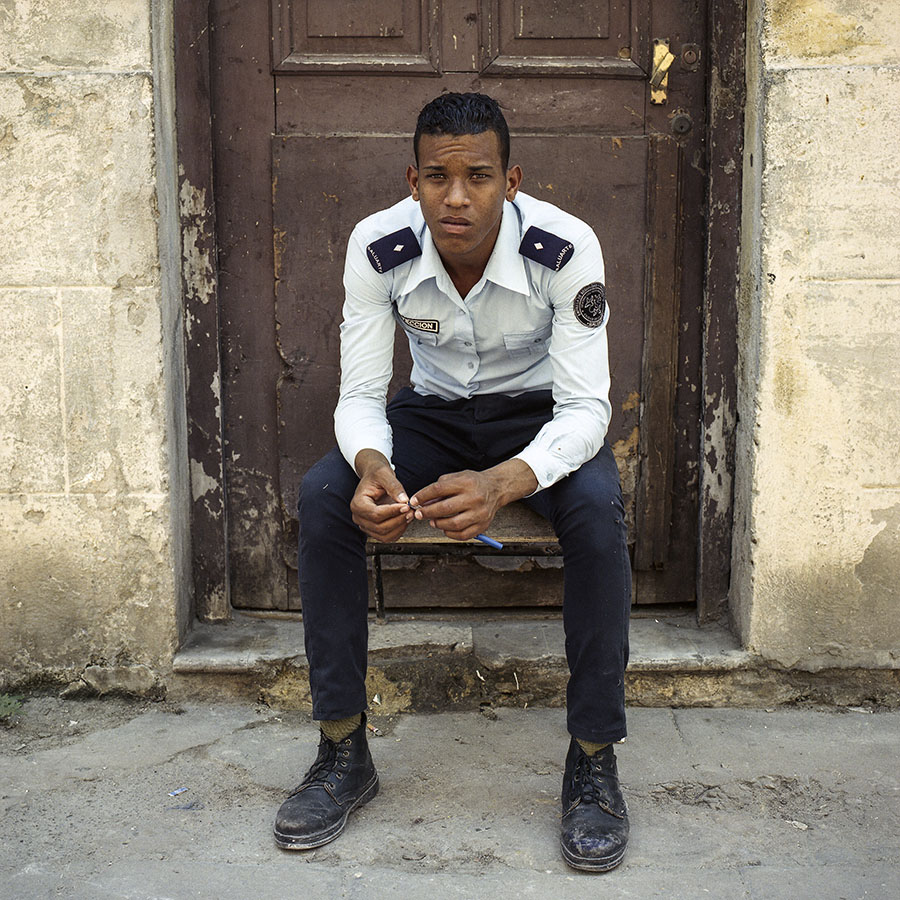 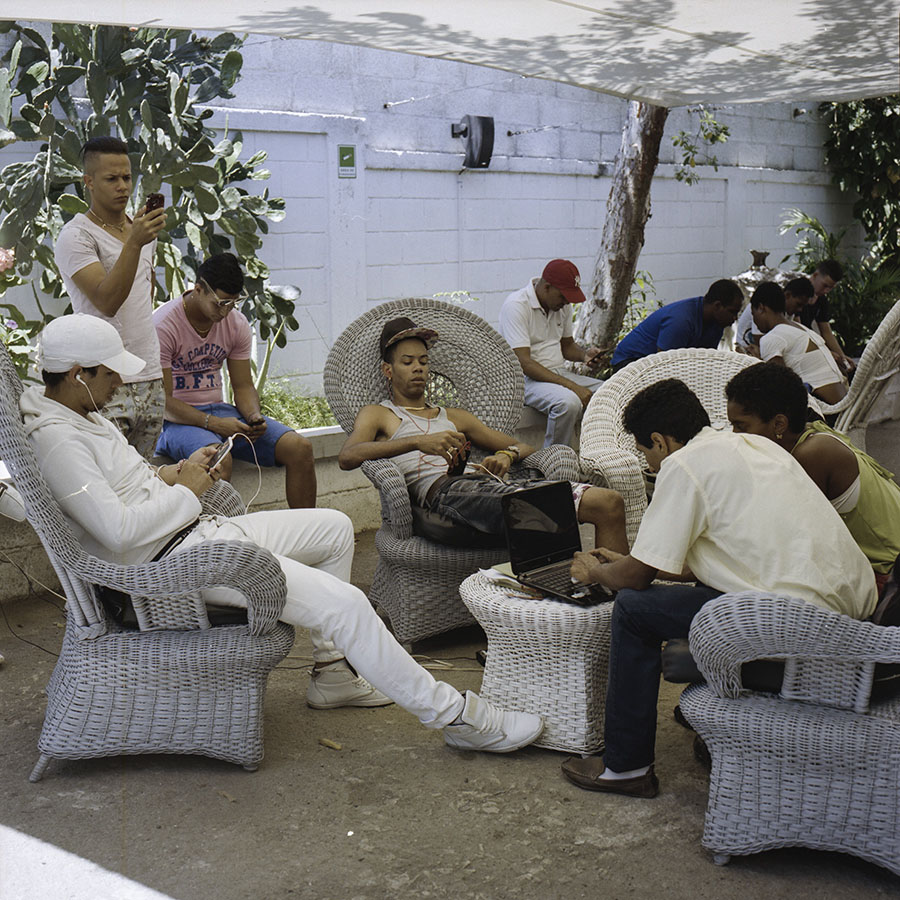 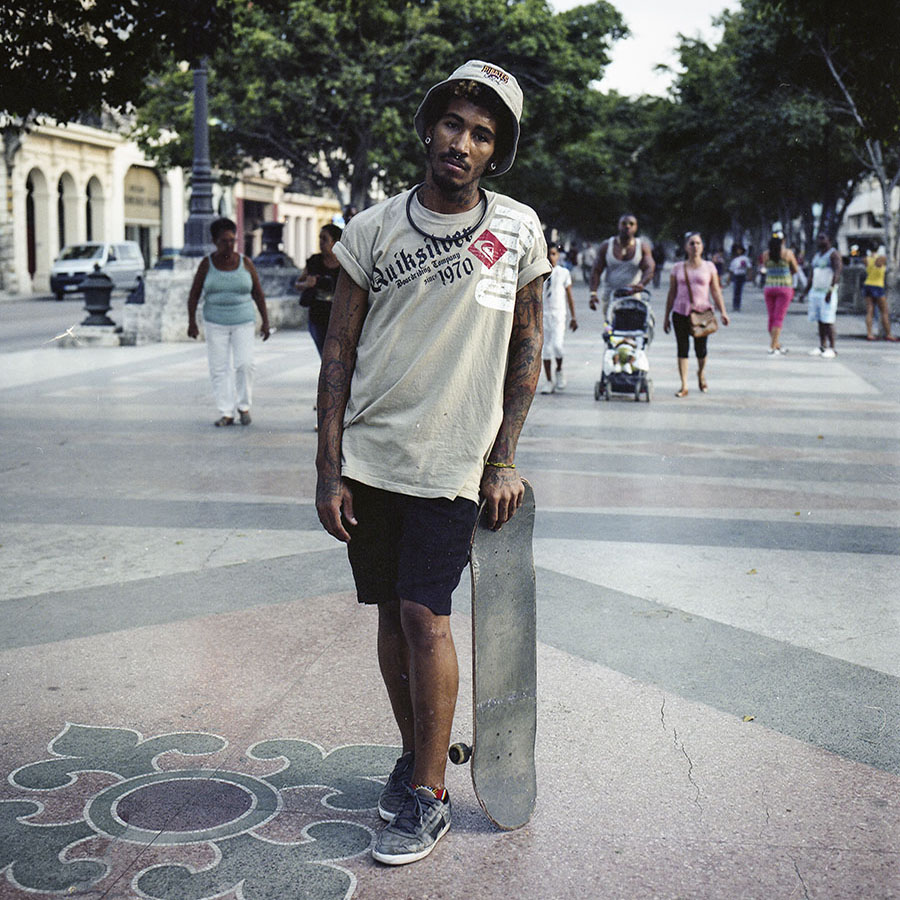 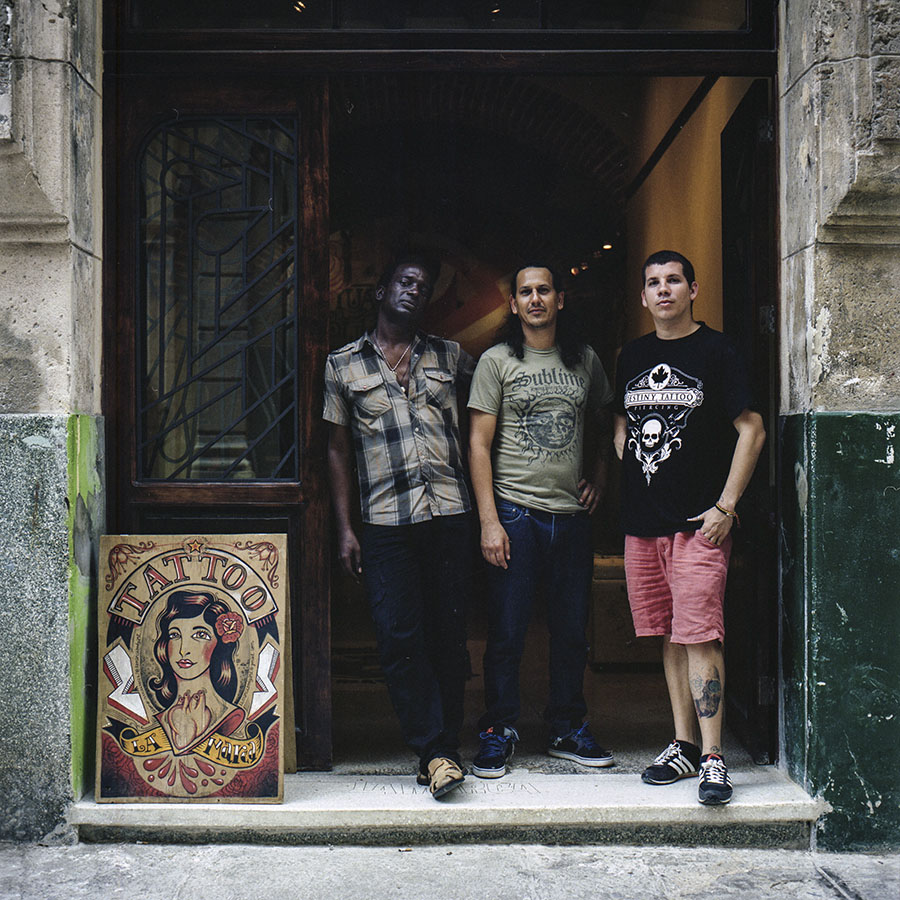 Alhen Mayfren and Belkys Mata pose for a picture at Pabellón Cuba. She is an accountant from Venezuela and came to Cuba on vacation for a couple of weeks. Mayfren is dancer and actor, and he is currently preparing a street show in Old Havana for the "Habana Vieja: Ciudad en Movimiento" festival.

A view of downtown Vedado district from the roof of the Prince building. In the background is the Hotel Habana Libre, the former Hilton Hotel before the Cuban revolution.

A teenaged couple at the Malecón, an esplanade that runs for a five-mile stretch along the coast of Havana. A popular spot, this balcony to the sea offers relief from the noisy city.

Concrete Soviet-style building in Alamar, a Havana suburb, that was converted into the Centro de Arte de Alamar, Habana del Este. Alamar, developed in the 1970s with the help of the former Soviet Union, is one of the biggest housing projects in Cuba and is now in decay. Alamar is also seen by many as the birthplace of Cuban hip hop.

Twenty-two-year-old Shellys Mayara is a second-year student at the ISA (Instituto Superior de Arte), but she also works as an actress and model. "I am lucky to be very busy working as an actress, makeup artist, and model." She says she’s going to take part in a U.S.-Mexican horror movie, soon to be filmed at the border.

A group of kids has come to the Malecón after an afternoon of street soccer. Hot, they abandoned their game to jump into the cool water, when a guard came to fine them. For years, it has been forbidden to swim in the Malecón. The authorities do not permit it because of the water pollution and the risks of swimming near the reefs and rocks.

Harlyn Ramos, 26, is a jazz, fusion, and Cuban music percussionist. A native of Havana, he grew up in the neighborhood of La Ceiba. Now, he lives in St. Petersburg, Russia, with his wife but is back in Cuba to see his family. He carries his iPhone in his pocket, a luxury few of his Cuban friends can afford.

Damarys Benavides consoles her friend, Claudia, who is having problems with her boyfriend, at the entrance of Pabellón Cuba, one of the most important spots in the youth culture scene; it is the only place where there are free concerts every day, and youngsters go to drink coffee, sodas, beers, and rum.

Cristobal, 22, is graduate of fine arts and is now working as a tattoo artist in Pinar del Río. Though the practice is still largely illegal, making it difficult to import the necessary equipment (needles, sterilizers, and ink), the fondness for tattoos is growing. Recent reforms have not formally legalized the activity, although the first official tattoo studio recently opened and is attached to an urban art gallery in Havana.

Kids line up at the legendary ice-cream parlor, Coppelia, known as the “ice-cream cathedral.” A project of the communist government, it was built in 1966 in the city center of Havana. Its advent was marked by whimsy and splendor, offering 26 flavors of ice cream. Today, due to a shortage of products, Coppelia only serves one flavor a day, but still thousands of people come every day, waiting upwards of two hours in line. A scoop of ice cream costs 2 Cuban pesos (8 cents USD).

Monica Moltó, a telecommunications student in Havana, at a cafe trying to connect to the Internet.

Empty rum bottles. Traces of last night at the Malecón in the morning. This is a popular place that in the afternoon, evening, and night is filled with couples and groups of friends having fun. There are all sorts of stories, always accompanied by rum, beer, and cigarettes.

Ernesto Mesa, 21, a visual artist from Guanabacoa, is part of a skater groupfrom Paseo Prado. He no longer owns his own skateboard, but he keeps going out every day with his gang. A self-taught, aspiring artist, Mesa would love to pursue an art history degree. Though both his parents have jobs, they don’t have the money to spend on tuition. “I love doing stencils,” he says, “but I cannot afford the sprays.” A fan of American music, his hairstyle is a tribute to Jimi Hendrix.

Young people enjoy beers at Pabellón Cuba. The price of a beer in a Havana bar ranges from $1 to $2.50. Pabellón Cuba is an important place in Cuba’s youth culture scene. In the afternoon and into early evening, there is a small bar that serves coffee and drinks, and bands play music.

William Montano is a new cuentapropista (an entrepreneur), selling telephone cards in Vedado. The 27-year-old used to be a fisherman, but now he works full time with his new business. He still fishes on Sundays at the Malecón. In addition to the money he makes with phones, he sells his weekly catch -- 4 to 6 pounds of fish.

A common scene in Cuba: men playing Parcheesi on a street in downtown Havana. Domino and Parcheesi have been the most popular games in the neighborhoods of Havana. The youth of today are exchanging those habits for video games and mobiles.

Javier Marine, 20, is one of three guards who watch over the new headquarters of the French Lyceum school in central Havana, inaugurated last month by the president of France, François Hollande. “Thank God I have not had problems, because Cubans are not problematic at all,” Marine says referring to the relative lack of violence in Cuba. He hopes to someday study computer science.

The first free Wi-Fi Internet in Cuba, at the Kcho art studio in El Romerillo. Dozens of young people came with their computers and phones to connect, but the network was saturated with users, and no one was able to connect.

Fabian Lopez is the 18-year-old leader of the skater group from Paseo Prado. He studied English and makes his living mostly as a tattoo artist. “Havana is very good for skating,” he says. But the police often get in the way. “I have about 50 pending fines of 100 Cuban pesos ($4) each, but I do not have the money.... They all are fines for skating under the law of social indiscipline.” He acknowledges that the skill level is not as high here in Cuba as it is elsewhere in the global skating community. But, he says, “I do not say that because I dislike my country, in fact, I have this island on my arm,” he says, holding up his arm to reveal it. “It was my first tattoo.”

David Perez Laza, 40, Leo Canosa, 40, and Mauro Coca, 23, are tattoo artists at La Marca, which opened in January 2015. This business was not possible a short time ago.

Monica Moltó sits on a small boat-shaped brick bench, the work of artist Alexis Leyva Machado, known as Kcho. The people scattered around her are busy with their laptops, tablets, and computers. She is one of the dozens of young people patiently trying to connect to the first free Wi-Fi Internet in Cuba at the Kcho art studio in El Romerillo.

Moltó, 18, is a telecommunications student in Havana.

“In college, we fix payphones and old machines,” Moltó says as she holds an iPhone in one hand and checks her laptop with the other. Sporting a tight printed T-shirt and big retro sunglasses, Moltó wears her dyed hair short and has a small piercing in her nose. Referring to school, she says that much of the work they do “is all very theoretical, because we have very few computers and almost no Internet.”

After a half hour, Moltó gives up on trying to load her Facebook page, though the rest of the young faces around her still appear engrossed in their browser screens waiting to connect. They, like Moltó, are part of Cuba’s millennial generation, a group of young people who no longer identify with their country’s revolutionary ideology. They are not as vested in politics nor are they interested in working for the state for a monthly wage of roughly $15 to $20.

Moltó was 11 years old when Fidel Castro resigned power, and she does not remember his now notoriously long speeches, in which he railed against the United States and harangued the Cuban people listening with his ideas about socialism. Neither does she remember Cuba’s links to the USSR, the hard Período Especial, and when the famous Coppelia ice-cream shop had more than one flavor per day. The Cuban revolution is something that she studied in school and is little more than that to her now -- something that happened long ago. It is not a part of her.

Nowadays, however, in her Cuba -- despite most of the population still working for the state -- the biggest part of the people’s salary is the black market, especially in the cities. The system doesn’t work anymore. There is a funny sentence that many people like to repeat: “The state pretends to pay us, and we pretend to work.”

She is part of a growing and ambitious creative collective -- young musicians, designers, dancers, actors, and artists -- who lack material wealth but are now seeking their place in the alternative (private) scene outside the official proceedings.

Cuban millenials have a more Western mentality; they want stuff, they want to look good, to have fun, and to be able to have the freedom to pursue grander ambitions -- financial and otherwise.

Edu Bayer is a freelance photographer based in New York.