The Islamic State’s Destruction of Palmyra’s Ancient Temple, in Photos

Photos were released Tuesday of the Islamic State's alleged destruction of ancient sites in Palmyra.

Two days after Syrian government officials reported that the Islamic State destroyed Baalshamin Temple, a historic structure dating back to the first century in the city of Palmyra, the militant group controlling large stretches of Iraq and Syria released disturbingly vivid photos of the ancient site’s apparent destruction.

The photos, made available through the SITE Intelligence Group, which tracks terrorist activity, were published on Twitter Tuesday. The photos show Islamic State fighters placing explosive barrels in and around the temple, then document the blast itself and the mounds of large gray stones remaining after the explosion.

According to CNN, Maamoun Abdulkarim, Syria’s director-general of antiquities and museums, said Sunday that the temple is the first structure of its kind to be completely destroyed since the Islamic State took control of Palmyra and neighboring Tadmur in May. The city has already paid a heavy human cost: Just last week, Khalid al-Asaad, the 83-year-old director of antiquities in Palmyra who committed his life to the preservation of the city’s ancient ruins, was beheaded in public and hung from a Roman column in Palmyra.

The United Nations’ cultural organization, UNESCO, called the nearly 2,000-year-old temple’s destruction “a war crime.” Palmyra’s Greco-Roman structures are classified as a UNESCO World Heritage Site, and the ancient temple’s towering columns and ornate archways were considered some of the most important and well-maintained from the ancient world.

Despite reports from local leaders that the explosions occurred on Sunday, the U.K.-based Syrian Observatory for Human Rights claims their sources reported the demolition took place a month ago.

The blast, whether it took place on Sunday or last month, marks an acceleration in the group’s determination to demolish cultural landmarks preserved by antiquity experts for thousands of years. Previous footage released by the group has documented fighters destroying artifacts in a museum in the Iraqi city of Mosul and blowing up 3,000-year-old archaeological sites in the ancient Assyrian city of Nimrud. 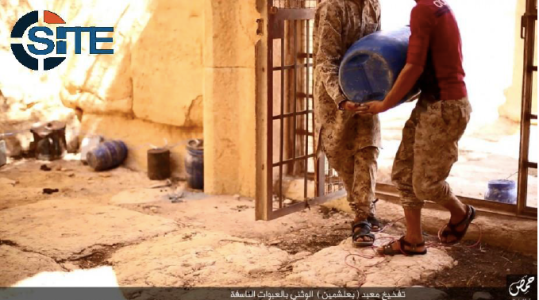 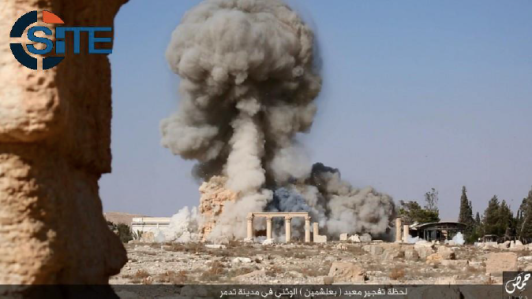 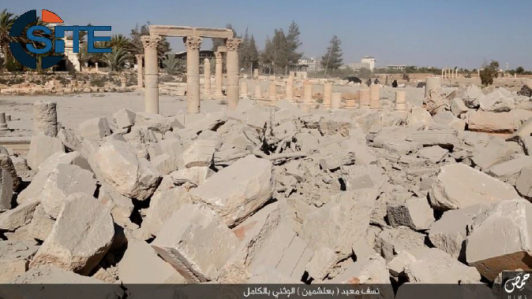