"This Rare, White Bear May Be the Key to Saving a Canadian Rainforest" by Alex Shoumatoff, Smithsonian 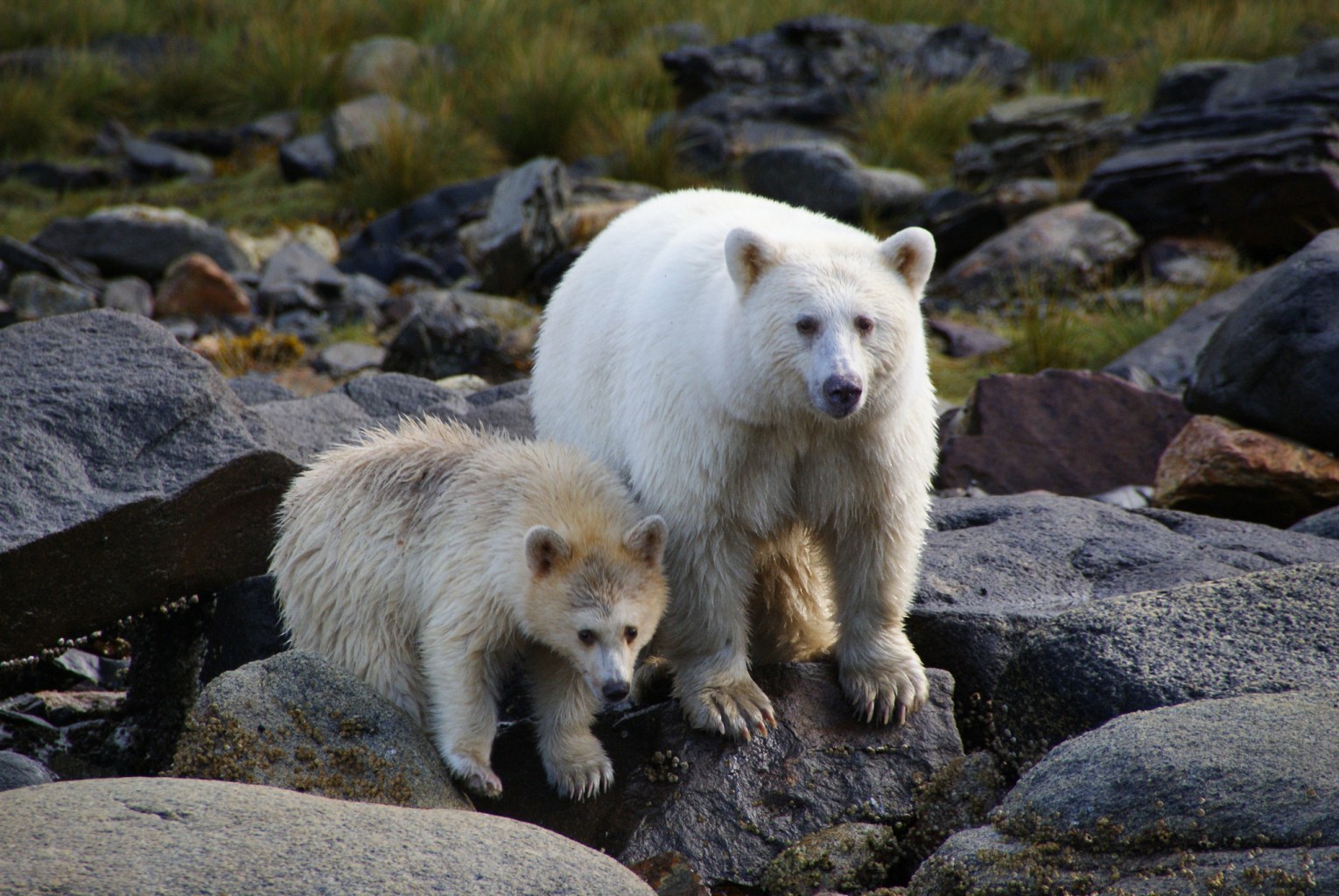 “This Rare, White Bear May Be the Key to Saving a Canadian Rainforest” by Alex Shoumatoff, Smithsonian

“Very quietly we paddle to shore in a raft from the research vessel, which has stopped at the mouth of a small river cascading into the Pacific, one of more than a hundred salmon-bearing rivers in the 1,500-square-mile territory of the Kitasoo/Xai’xais people. We’re halfway up the coast of British Columbia, in the heart of the Great Bear Rainforest, in one of the largest unspoiled temperate rainforests on earth. We climb out and sit on boulders in the intertidal zone, in front of a meadow. Behind it is primeval forest, a solid wall of trees — western red cedar, Sitka spruce, alder, hemlock, Douglas fir.

A crow let out two clarion caws as we came in, and now every animal within earshot knows of our arrival. The humans are back. Four of us have mounted serious lenses on tripods, and we are all waiting motionlessly, respectfully. Big gobs of meringuelike foam drift down the final run of the river into the seething surf. ‘Organic matter,’ whispers our guide, Philip Charles, a 26-year-old Brit who has a bachelor’s degree in animal conservation science and has been made an honorary Kita­soo for all the work he has done to help these First Nations people reassert sovereignty over their homeland, and to get ecotourism going.” 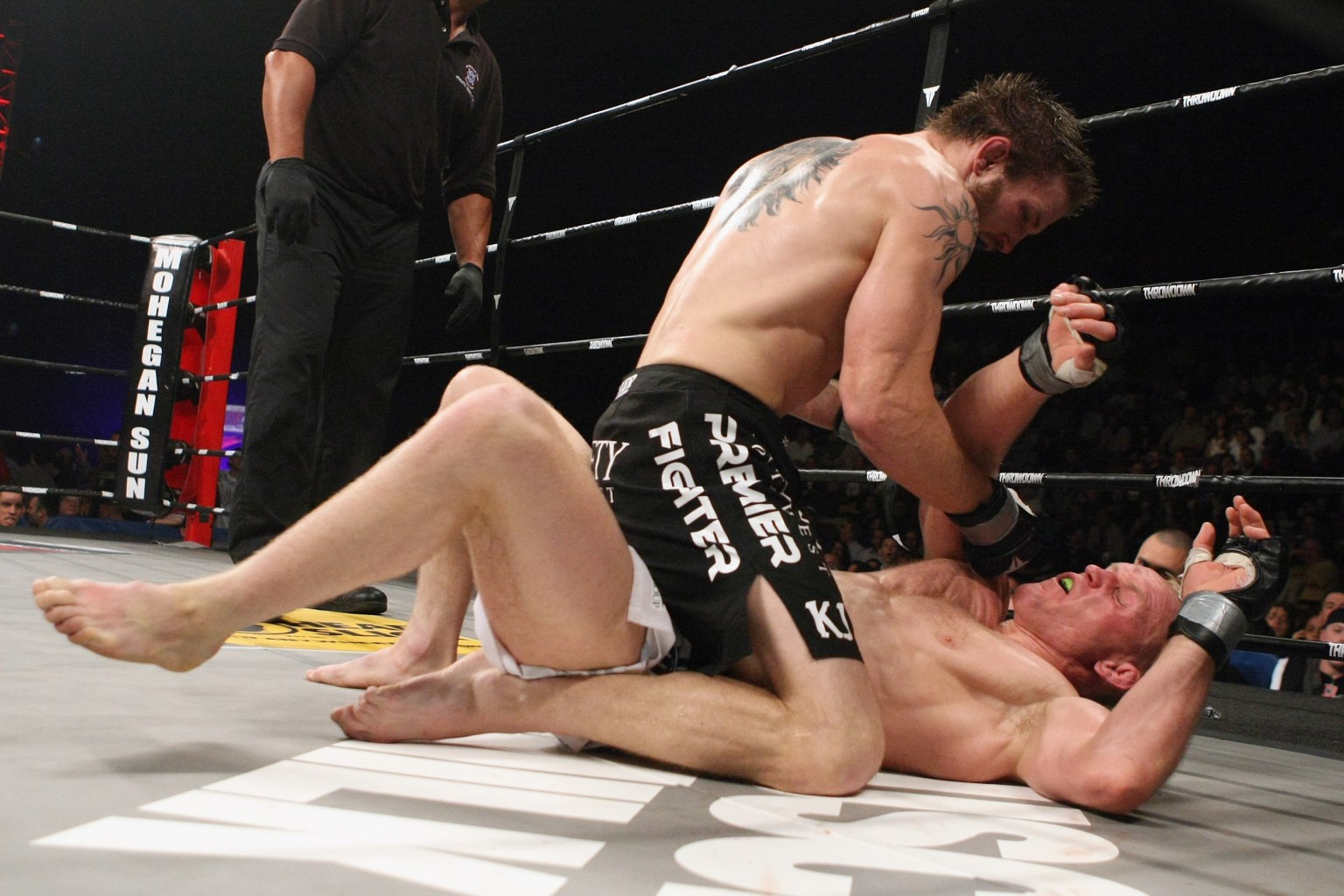 “One Hundred Years of Arm Bars” by David Samuels, Grantland

A family epic spanning the Gracie Jiu-Jitsu dynasty’s generations of combat and betrayal, from the Amazon to Hollywood to the UFC.

“Many years later, as he stood amid a haze of dry ice in a half-full arena in Portland, Oregon, Roger Gracie imagined the afternoon on the Amazon River when his grandfather Carlos Gracie was introduced to Mitsuyo Maeda, a Japanese judo master who would instruct Carlos and his brothers in the art of throwing a man to the ground, then using leverage to render him helpless and senseless. Roger had heard the story dozens, if not hundreds, of times, told over and over by members of his formidable bloodline: In that encounter, which took place shortly before World War I in the Brazilian rubber boomtown of Belém, the most powerful and influential fighting style in the world was born.

Gracie jiu-jitsu, as their version of Maeda’s teachings came to be known, was at once so technically precise and capable of such rapid evolution that it gave rise to the greatest family dynasty in the history of the martial arts. In the century that followed, three generations of Gracies took on champions of the arts of karate, boxing, kickboxing, Greco-Roman wrestling, and other styles of hand-to-hand combat on the biggest stages they could find, and they consistently emerged victorious. In 1993, Rórion Gracie founded the Ultimate Fighting Championship as a way to spread Gracie jiu-jitsu to North America, inspiring the rise of mixed martial arts.” 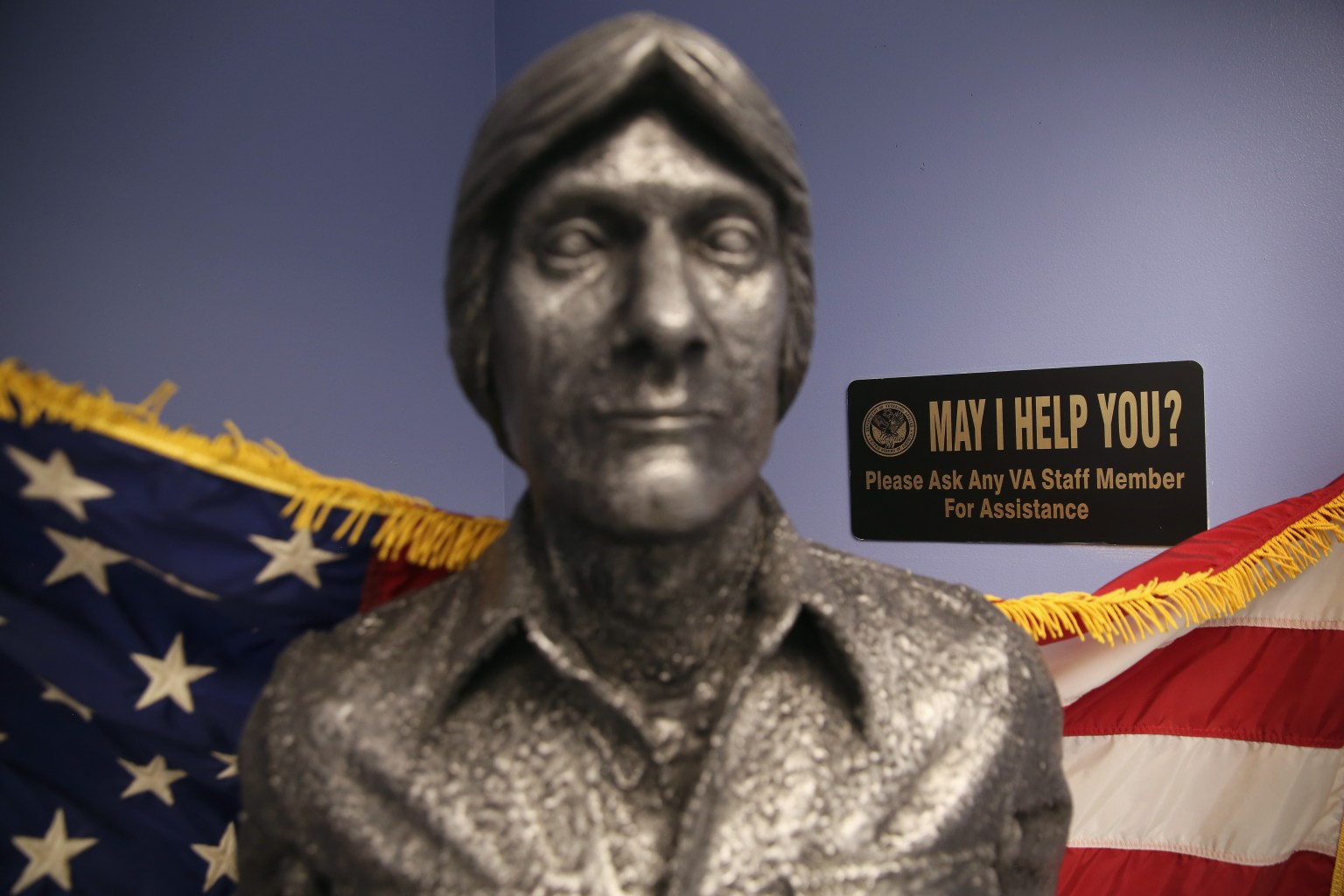 “Daniel Wolfe Is Killing Himself Live on Facebook” by Zach Baron, GQ

The search for an Iraq veteran on the brink of suicide.

“It’s late afternoon, MAY 5, 2014, and Daniel Wolfe walks up a shady street through bright sunshine, the heat still rising as the light falls. There’s hardly anyone around to see him, but still he’s a sight: a big lumbering shadow, six feet four, two forty, with a bad knee and a black backpack, a tall broad man among the low quiet houses. He’s wearing plaid shorts, black-and-green tennis shoes, a dark-color shirt. His backpack contains most of what he’s got left. Discharge papers. Records from V.A. hospitals in two states. Old warrants for his arrest. He’s got a V.A.-issued pamphlet on ‘Pain and Pain Management’ and an appointment card for ‘Mandatory Suicide Prevention Education,’ dated three months ago. He’s got a bottle of Jack Daniel’s, a cell phone, and a box cutter.” 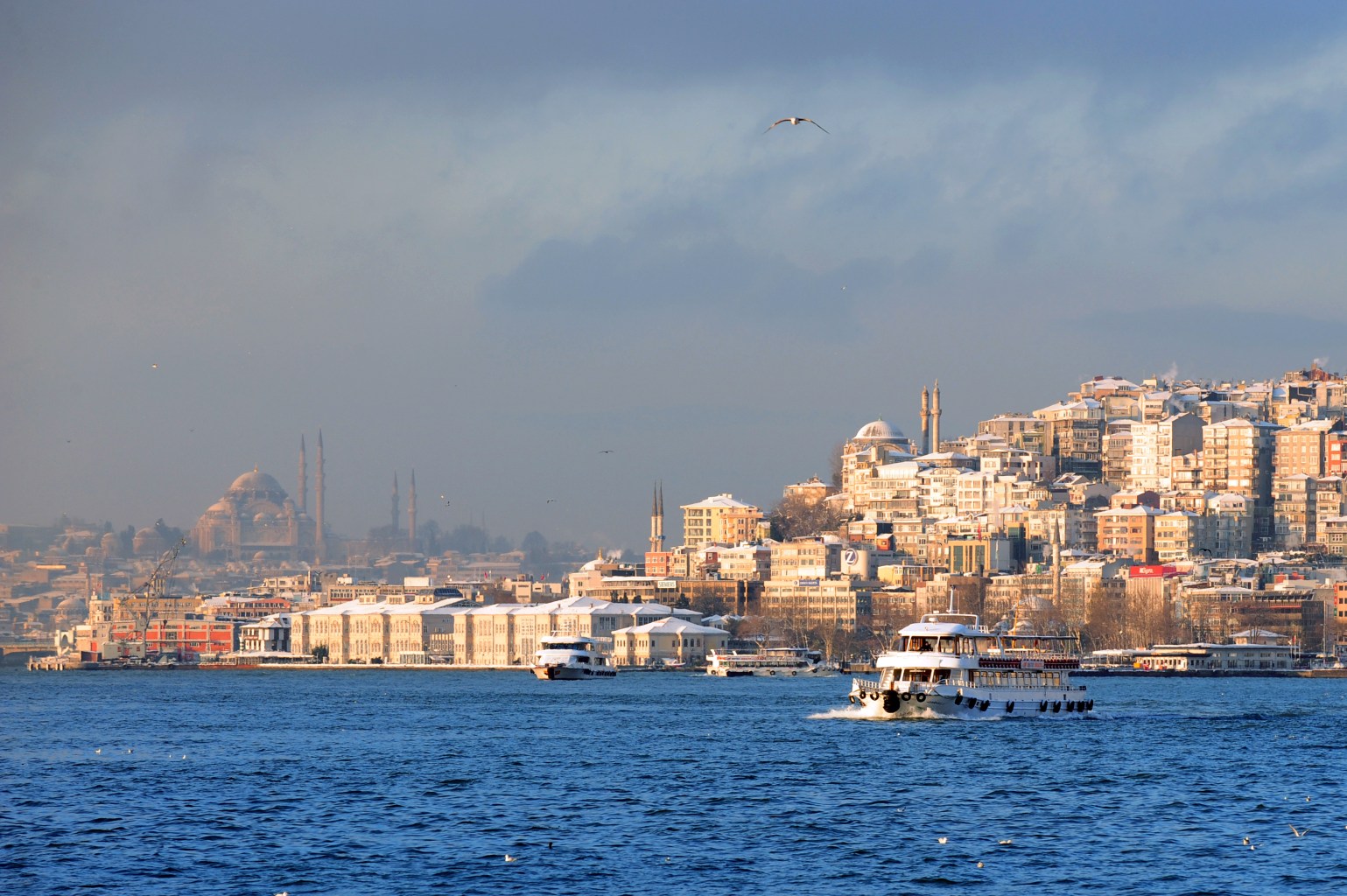 “The Big Dig” by Elif Batuman, the New Yorker

Istanbul’s city planners have a problem: too much history.

“When it came to choosing the exact location of the first tunnel spanning the Bosporus — the narrow strait that divides the European and Asian sides of Istanbul and links the Black Sea with the Sea of Marmara — one of the principal considerations was how to avoid encountering any archeological marvels. The tunnel was for a new high-speed train called Marmaray (a combination of ‘Marmara’ and ray, the Turkish word for ‘rail’), connecting to Istanbul’s metro system. Of particular concern was the placement of the main station on the European shore, on the site of ancient Byzantium and Constantinople: everything within the ancient city walls has been designated both by UNESCO and by the Turkish government as a historical site, and all digging must be supervised by the Istanbul Archaeological Museum. The location that was eventually chosen, in the working-class district of Yenikapı, had conveniently spent much of antiquity underwater. In Byzantine times, it was a harbor.

‘What’s going to turn up in a harbor?’ one official explained, when I asked about the decision. ‘Seabed and sand fill. Architectural structures aren’t going to turn up.'”

An FP investigation shows that Imaad Zuberi, who has bundled hundreds of thousands of dollars for leading Democrats, failed to disclose the extent of his ties to a foreign government.

“The photographs, posted to social media sites like Facebook and Google Plus, are his calling card. Bumping fists with President Barack Obama in front of a Christmas tree at a White House reception. Sharing a belly laugh with Vice President Joe Biden at a formal luncheon. Flanked by Republican foreign-policy hawks Sen. John McCain and Rep. Ed Royce in a Capitol Hill office. Cheek to cheek with Democratic presidential candidate Hillary Clinton.

Imaad Zuberi, age 45, is a private equity fund manager, venture capitalist, and an elite political fundraiser. He was among the top tier of bundlers for Obama’s 2012 reelection campaign, meaning he delivered $500,000 or more in contributions. He’s already among Clinton’s ‘Hillblazers,’ bundling $100,000 for her presidential campaign in its first months.”