Europe’s Migrant Crisis By the Numbers

These four charts show the scale of the continent's humanitarian situation.

In April, a 66-foot boat carrying some 850 migrants across the Mediterranean Sea to Italy capsized, killing almost all those on board. The tragedy catapulted migration issues to the forefront of Brussels’s political agenda, as ministers grappled with how to deal with Europe’s influx of asylum-seekers and migrants without documentation.

The crisis, of course, had been simmering long before April. According to the Geneva-based International Organization for Migration (IOM), some 3,200 people died trying to cross the Mediterranean in 2014. (The number was nearly 2,000 for just the first half of 2015.) And globally, the number of people displaced by conflict, persecution, or human rights violations topped 59.5 million at the end of 2014, according to a report by the Office of the U.N. High Commissioner for Refugees—numbers not seen in decades.

The European Union’s proximity to protracted conflicts in the Middle East and Africa, as well as economically depressed areas in Eastern Europe, has made member countries—particularly Germany, Hungary, France, Italy, and Sweden—top destinations for asylum-seekers. In the first four months of 2015, EU member states received 242,075 first-time asylum applications, an 80 percent increase from the same period in 2014. (First-time applications, represented throughout the graphs to the right, offer the best trend measure, due to the high likelihood of repeat claims within a year or even a month.) Hungary, which people typically reach by way of Turkey or the Balkan states, saw the largest increase in applications, with nearly 13 times as many. And given the well-publicized dangers of traversing the Mediterranean, the EU shouldn’t be surprised that this land route is growing congested: In the first six months of 2015, IOM data showed 61,000 asylum-seekers and undocumented migrants there, already surpassing tallies for the whole of 2014.

No one can deny that migration is a full-blown regional crisis. The question now is whether the EU has the collective will and resources to solve it.

Who goes where?
Citizens from Syria and Kosovo comprised nearly 40 percent of asylum applicants during the first four months of 2015; Syrian claims were up 80 percent from the same period last year, whereas those from Kosovo exploded, seeing a 17-fold jump. 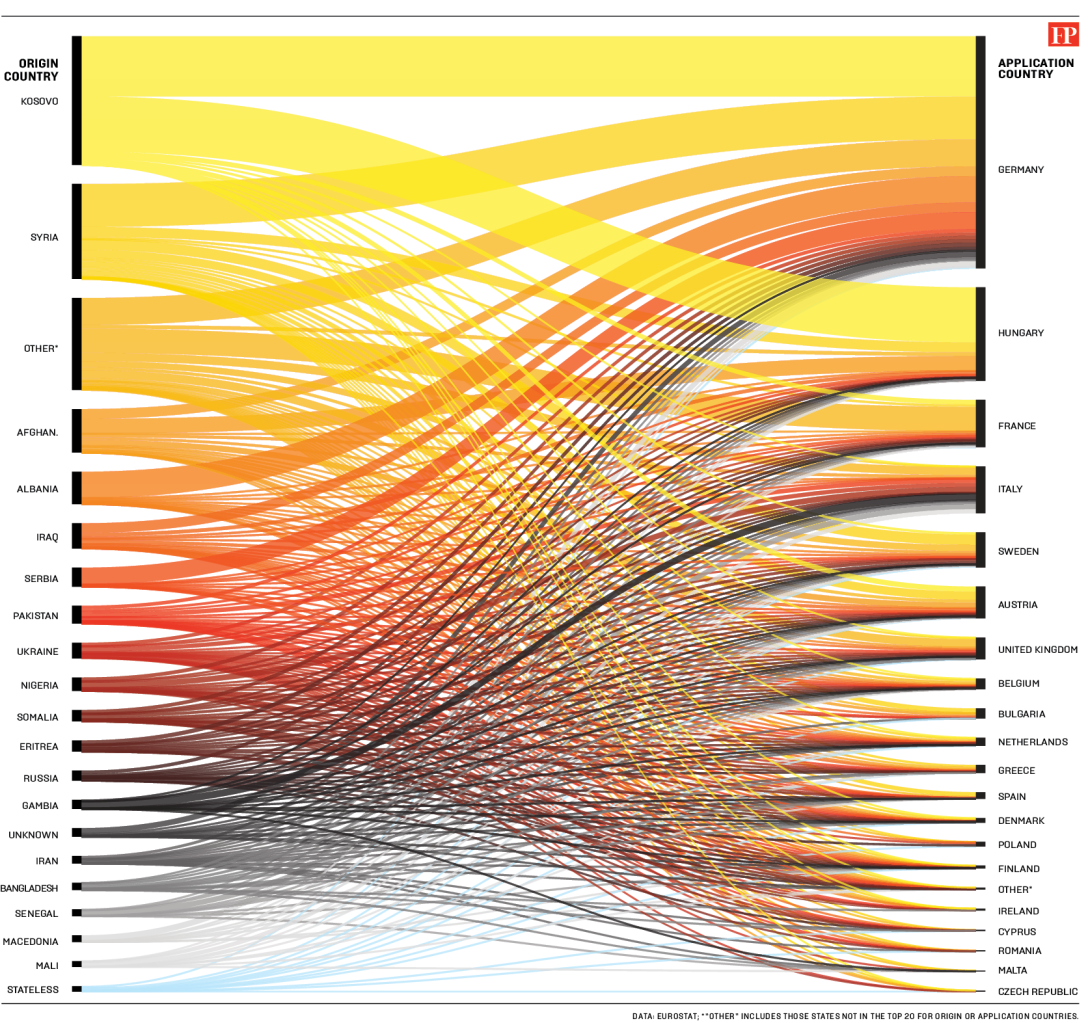 What are their favored destinations?
Germany received 40 percent of asylum applications during the first third of 2015, while Hungary, France, Italy, and Sweden combined received another 39 percent. 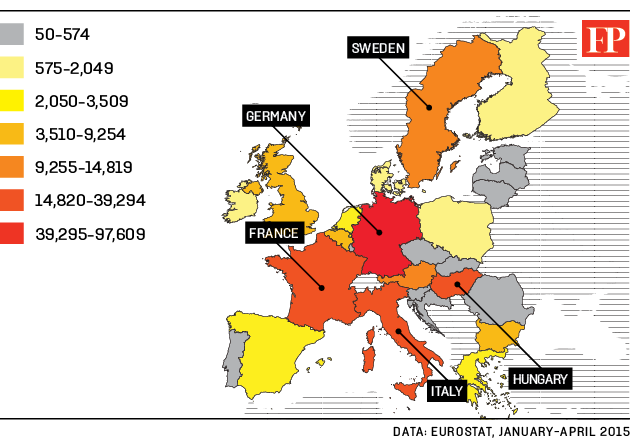 Who are they?
The vast majority of asylum applicants are men ages 18 to 34, but the proportion of minors grew significantly during 2014. Those with unknown age or gender (only 0.1 percent of applicants) are not shown.

How do they get there?
In 2014, nearly 78 percent of detections of asylum-seekers and undocumented migrants occurred at sea—the most common being Syrians attempting to traverse the eastern and central Mediterranean (two of the most congested border crossings). Eritreans were one of the most frequently found populations along the central Mediterranean, while Afghans, Somalis, and Iraqis contributed to heavy volume along the eastern Mediterranean. And in late 2014, a spike occurred along the route through the Western Balkans, the third-most-popular land or sea route. 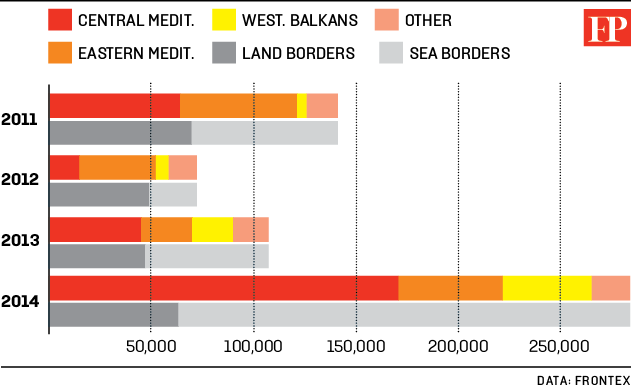 Photoillustration by FP/Getty Images. A version of this article originally appeared in the September/October issue of FP under the title “Across Borders.”