Russian Troops Are in Syria, and We Have the Selfies to Prove It

Standing against the backdrop of Istanbul’s iconic Bosphorus bridge, a young man in combat fatigues poses for a photo holding up a colorful sign that says “I love you” in Russian. He’s not a tourist, though. The man’s name is Maxim Mazhnikov; he’s a member of Russia’s 810th marine brigade; and he posted the photo to social media to document his journey to war-torn Syria.

What Mazhnikov will do when gets there remains a bit of a mystery, but he is one of many Russian troops from the same unit that have been tracked via social media as they make their way towards Syria. According to a report by Russian investigative journalist Ruslan Leviev, growing numbers of Russian troops over the last two months have been sent to a Russian naval maintenance facility in Tartus, in western Syria. The apparent Russian military buildup there is sending alarm bells ringing in Washington, where the Obama administration worries that Moscow may be stepping up its efforts to help Syrian strongman Bashar al-Assad hold on to power.

Leviev’s research, which relies on posts by troops on Russia’s two biggest social networking sites, notes a shift in the types of troops being sent to Syria, from draftees to experienced career soldiers. Many of the posts have already been taken down, but Leviev managed to track down several troops from Russia’s 810th marine brigade and monitor their movement to Syria through the photos and status updates they posted online.

This photo, taken from VKontakte, Russia’s version of Facebook, shows Mazhnikov, a career soldier, crossing the Bosphorus bridge in Istanbul en route to Tartus and was posted on March 29, 2015. (Click to enlarge.) 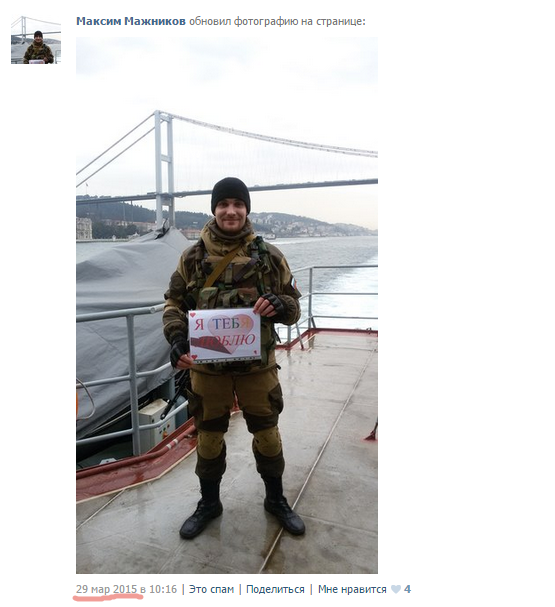 Photos taken from Mazhnikov’s profile on Odnoklassniki, another popular Russian networking site, show him in Syria at the Russian naval facility. The following photos were posted on Aug. 22, 2015. 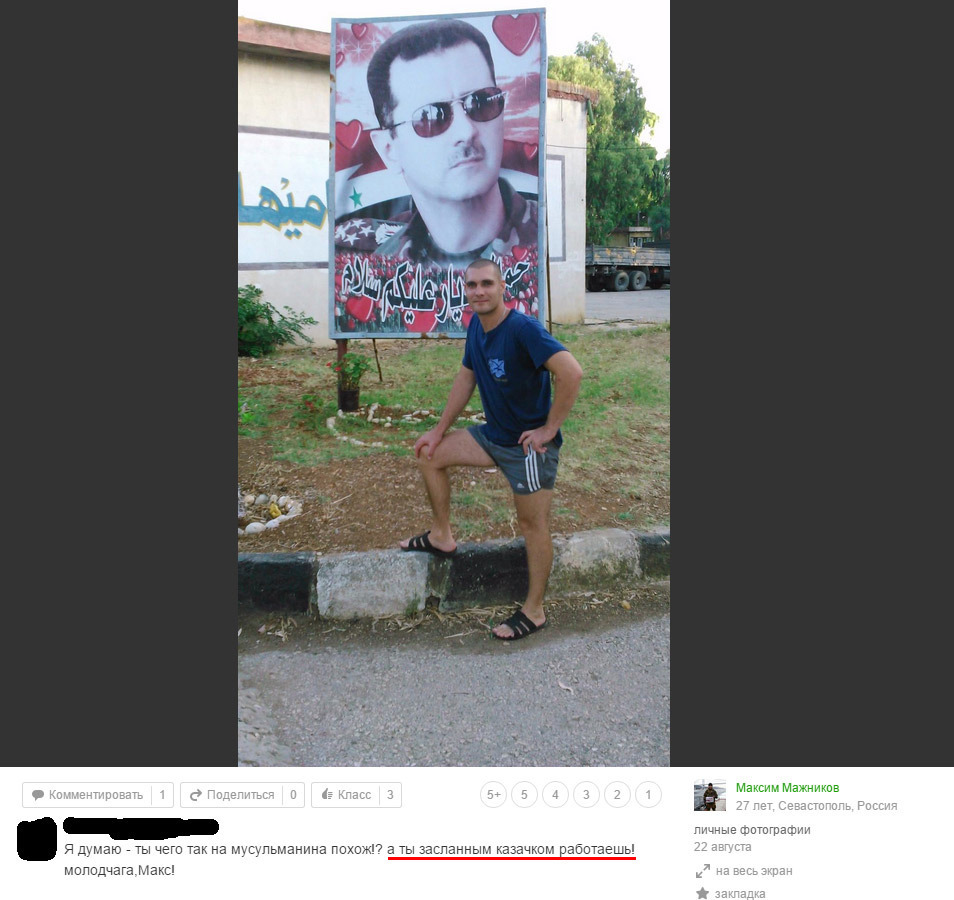 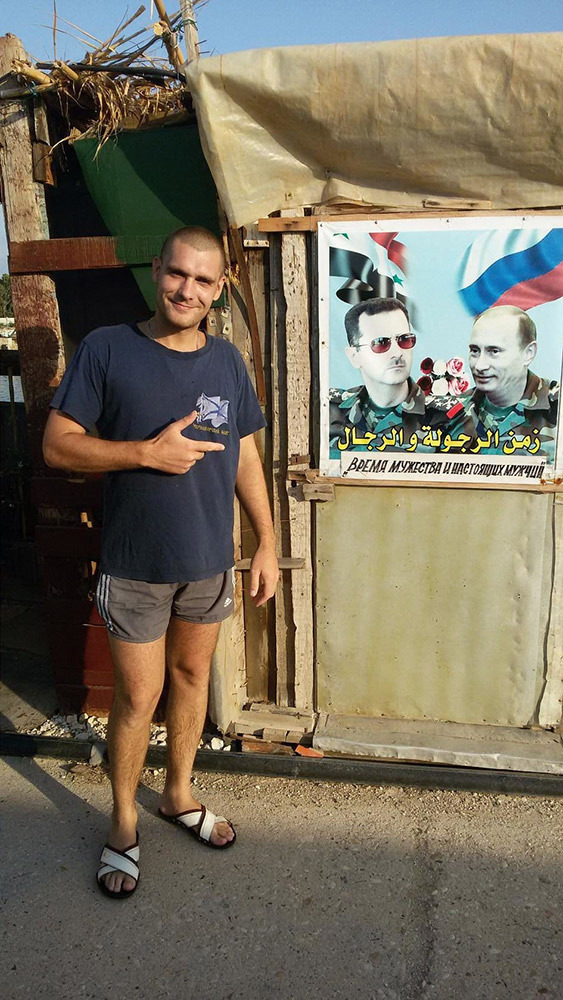 Leviev also found Anatoly Golota, another member of the 810th brigade on VKontakte, whose status says: “Off to Syria”. 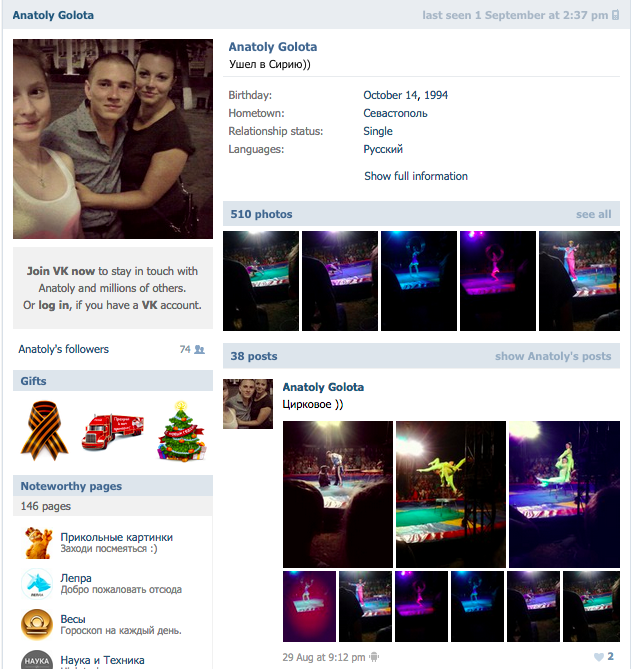 Videos uploaded to the Internet in recent weeks have also sparked concerns that Russian forces are engaged in actual combat inside Syria. On Aug. 24, the Oryx blog, which monitors military developments in the Middle East and North Africa, pointed to combat footage filmed and posted by the media wing of Syria’s National Defence Forces that showed a Russian-made BTR-82A armored vehicle near Latakia, in western Syria, with a color scheme used by Russian military units and not previously exported to Syria. As the armored vehicle is shooting in the video, orders can be heard in what appears to be Russian, raising speculation that troops sent by Moscow are taking part in fighting on the ground. Beyond the footage, however, there is little proof that Russian forces are engaged in Syria beyond their maintenance and advisory roles.

“The participation of [the] Russian fleet, special operation forces, or aviation [forces] are all possible, but in very limited scale,” Nikolay Kozhanov, a fellow at the London-based Chatham House and a nonresident scholar at the Carnegie Moscow Center, told Foreign Policy. “Putin will not send the army.”

Still, the influx of Russian troops, even if confined to Tartus, is indicative of the changing battlefield dynamics in Syria.

Since the war in Syria began, the Kremlin has been a key backer of the Assad regime, supporting Damascus economically, diplomatically, and militarily. Moscow was instrumental in helping to negotiate the deal in 2013 under which Assad gave up its chemical weapons in exchange for the United States rescinding plans to bomb his regime in response to the gassing of his own people. The Kremlin has been supplying weapons to the Syrian government throughout the ongoing war, and Russia has also played a role in training the Syrian military, with the Associated Press reporting in 2012 that Russia’s former Defense Minister Anatoly Serdyukov admitted to the country having “military and technical advisers” in Syria. Moreover, in October 2014, Syrian opposition fighters overran a joint Syrian-Russian listening center that was believed to be used for espionage operations.

According to Anna Borshchevskaya, a fellow at the Washington Institute and an expert on Russian foreign policy in the Middle East, Moscow is using the fight against the Islamic State to try to persuade the West to allow Assad to remain in power, something that Washington and its Gulf allies have said is a precondition for any successful peace talks. Should Assad abruptly fall, the Islamic State would likely benefit the most and could control even more territory in Syria.

“This is central to Putin’s proposal on how to fight ISIS,” Borshchevskaya told FP.

Moscow put forward a peace plan for Syria that envisions enlisting the Assad regime and Iran in the anti-Islamic State coalition, but rounds of negotiations with Washington and Riyadh have brought no visible results.

Amid the uncertainty of the Syrian government’s longevity in the country, signs are pointing toward an even greater Russian presence in Syria — and the influx of more experienced troops, like those from the 810th brigade, to Tartus could be part of that shift.

U.S. Secretary of State John Kerry expressed concern in a phone call to his Russian counterpart Sergei Lavrov over the weekend, saying that if the reports of a Russian military buildup were true, it could dramatically escalate the conflict. Kerry’s phone call came on the heels of a Sept. 4 New York Times report that Russia had sent a military advance team to Syria, as well as prefabricated housing units to an airfield near Latakia, where Russian humanitarian aid and military hardware have been unloaded.

Lavrov told Kerry it was premature to talk about Russia’s participation in military operations in Syria, a Russian Foreign Ministry spokeswoman told RIA Novosti on Monday. Still, Lavrov confirmed Moscow’s military commitment to the Assad regime, saying Russia “has never concealed that it delivers military equipment to official Syrian authorities with the aim of combating terrorism.”