A North Carolina lawmaker posts a photo accusing Obama of being Muslim, showing tin-hat theories about the president have yet to die.

Seven years after Republican presidential candidate Sen. John McCain of Arizona was forced to push back against the notion that President Barack Obama is Muslim or an Arab, tin-hat theories among the right have yet to die.

North Carolina state representative Michael Speciale, whose district includes the town of New Bern on the Carolina coast, posted a photo on Sept. 5 on Facebook that refers to the president as an “Islamic son of a bitch.” The photo shows Obama with Israeli Prime Minister Benjamin Netanyahu. As of Monday afternoon, it was still public, but we posted a screenshot of it below. 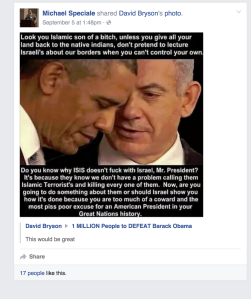 Speciale didn’t post the photo himself; he shared it from a page called “1 Million People to Defeat Barack Obama,” which is liked by a little over 172,000 people, where it was posted by a user named David Bryson. Speciale did not immediately respond to emailed inquiries from Foreign Policy.