It also shows just how screwed America’s Syria policy is.

Over the past year, evidence has steadily emerged of a growing Russian military presence in Syria. As Bashar al-Assad’s armies have failed him in the field, he has increasingly relied on outside help. Initially, that help came from Hezbollah and Iran, but now it appears to be Moscow’s turn. And Washington may finally be waking up to what looks like a substantial Russian intervention in Syria.

New satellite images, obtained by Foreign Policy, of construction at an air base near Latakia leave little doubt that U.S. policy toward ending the conflict in Syria, such as it is, is now in total disarray. As they say, seeing is believing.

Admittedly, there has long been a Russian military presence in Syria. When opposition forces overran a Syrian listening post in October last year, the images revealed that it was staffed by the Russian military. More recently, analysts have noted pictures and videos that seem to confirm the presence of Russian combat forces fighting in Syria. Russian military vehicles have been sighted, while Russian soldiers have posted images and comments on Russian social media sites like VKontakte and the California-based LiveJournal, detailing their service in the war-torn country. (Some of the best open-source analysis has been on Bellingcat’s website.)

It is very strange world we live in, one marked both by the “little green men” of Russia’s “hybrid” warfare who Moscow can disavow and by data ubiquity that allows analysts to mock those disavowals.

Still, there has always been a question about how extensive Russia’s support for the Syrian regime has been the past four years. Are those even Russians inside the Moscow-supplied combat vehicles? Open-source analysts have been quite enterprising in suggesting the answer is yes, hearing snippets of Russian in between bursts from the vehicle’s gun. But the Russians claim any Slavic accents are merely those of a very small number of trainers or advisors. Nothing to see here; please move along.

That is now very hard to believe. On Sept. 4, the New York Times published an article suggesting that Russia had shipped prefabricated housing and a transportable air traffic control station to an airfield near Latakia. It was a great scoop, but I was pretty baffled that the New York Times didn’t bother to purchase a satellite image of the facility. Had they done so, they would have realized that they buried the lede.

Drag the slider back and forth to compare a Google Earth image of the air base near Latakia with a recent satellite image of the same air base. 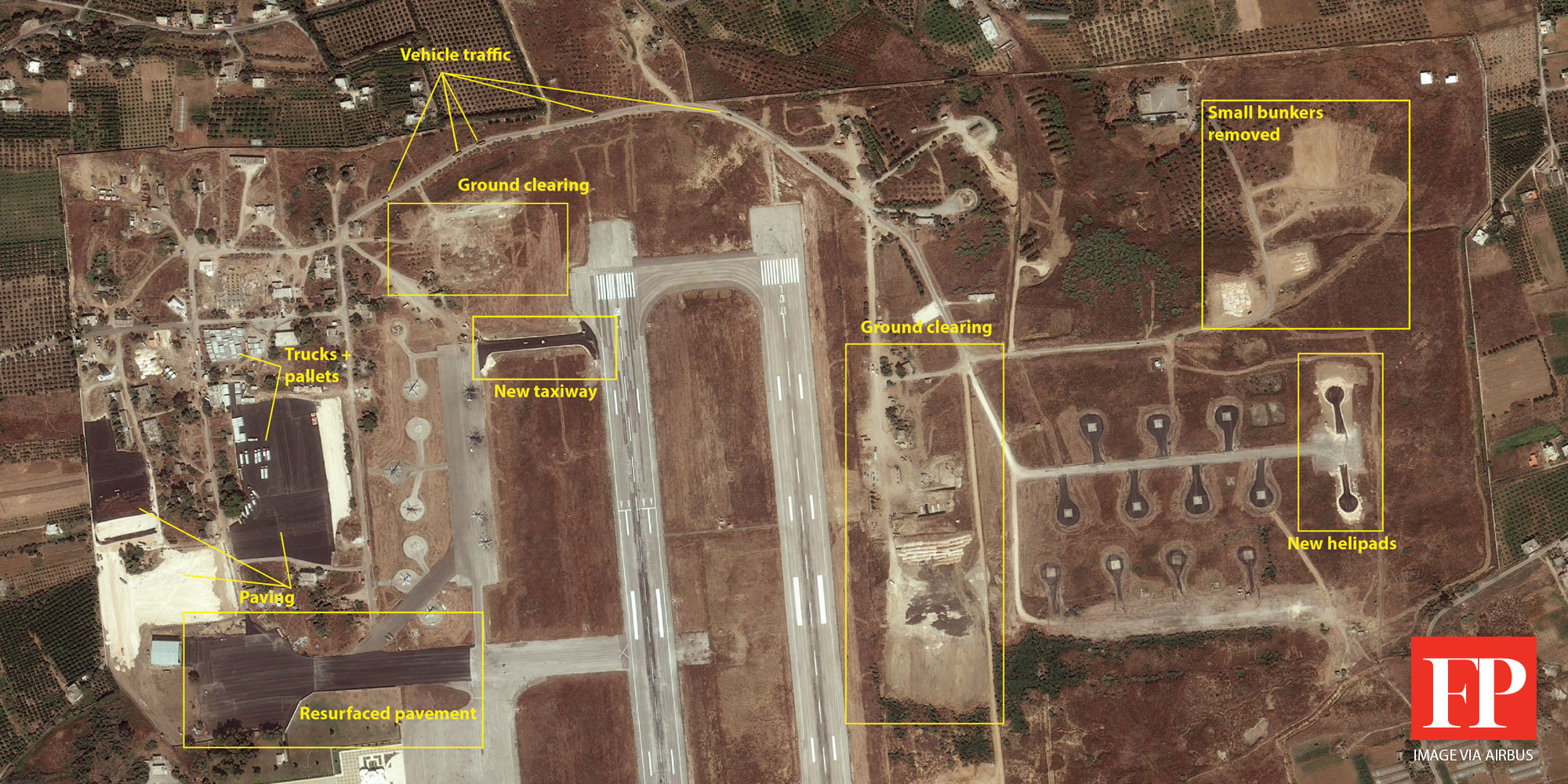 Above, a recent satellite image from the same air base. (Click to enlarge)

The satellite image shows far more than prefabricated housing and an air traffic control station. It shows extensive construction of what appears to be a military canton at Bassel al-Assad International Airport (named for Bashar’s elder brother, who died in a car accident in 1994). This canton appears designed to support Russian combat air operations from the base and may serve as a logistical hub for Russian combat forces.

In recent days, using aircraft tracking sites, a number of analysts have begun to document the near-daily arrival of Russian transport planes to the base. The Russians are also sending ships to Syria, though the ships often declare for a nearby non-Syrian port, like Port Said in Egypt, and then take a wrong turn at Albuquerque, so to speak.

The White House, according to Bloomberg’s Josh Rogin, scheduled a National Security Council meeting last week to discuss the construction. What is at stake is how to deal with a situation in which Vladimir Putin is going all-in on behalf of the Assad government while our policy is in tatters.

Rogin reports that U.S. officials believe Russia will base combat aircraft at the site. That is easy to confirm from the satellite image. In recent weeks, construction crews have completed a taxiway that connects the runway to the construction area. That means aircraft shelters for Russian aircraft.

The scale of the construction goes even further. A large area of ground has been cleared in many different parts of the air base. There are pallets and crates everywhere. Trucks are visible driving into the site. (We’ve annotated the image, but I highly recommend following @finriswolf on Twitter.) The image drives home the implication of all those flights and shipments heading to Syria: Russia is substantially expanding its involvement.

There is now little hope of establishing a no-fly zone over Syria, unless Washington wants to be in the business of shooting down Russian aircraft. From a broader perspective, U.S. efforts to arm the opposition to Assad mean fighting a proxy war with Moscow, either by trying to down the Russian planes or helping Syrian opposition forces kill Russian combat troops on the ground. That seems a much tougher task than fighting a proxy war with Iran and Hezbollah.

But beyond this narrow question of whether the United States wants to directly support combat operations against Russian forces in Syria, Moscow’s apparent commitment to Damascus raises fundamental questions about what U.S. strategy, if any, can succeed. I have long been opposed to collaborating with Assad. I don’t believe that he is committed to fighting the Islamic State; he only seems interested in attacking those opposition forces that threaten him directly. (In fact, by writing off parts of Syria to the Islamic State, he creates a second front for his opponents.) Nor do I believe he will ever command enough support to reestablish government control in Syria. If there is any hope of uniting Syrians, Assad must leave.

What Russia has done, however, is make it clear that it will not let Assad fall. He can’t win, but Russia won’t let him lose. That dooms Syria to what looks like endless war, as Assad fights to the last man. There are those who see Syria as a quagmire for Putin, a kind of matched pair to our own folly in Iraq; just as Washington collectively saw Afghanistan as payback for Vietnam. I am not so sanguine.

While Charlie Wilson’s war helped popularize the idea of bleeding Moscow, I don’t think that can be the basis of U.S. policy either. The moral cost is far too high. Aylan Kurdi, the 3-year-old boy whose corpse washed up on a Turkish beach, was fleeing Syria’s civil war, as are hundreds of thousands of the refugees now in Europe. More than half of Syria’s 17 million people have been displaced. Bleeding Moscow means bleeding these people. It may sound strategic in a Pentagon war room, but not when children’s bodies wash up on shore.

Columns are supposed to have a simple solution. An op-ed should have five paragraphs wrapped up in a neat little bow that explains how to fix the problem outlined in the first paragraph. One of my favorite professors (and FP colleague), Kori Schake, used to liken it to the answer in a beauty pageant. She was right, but for the life of me I can’t come up with one. It seems that, sometimes, the world’s pain can’t be solved in a few hundred words of sage advice.

So this column does not have a neat and tidy ending. And that is because I am not sure that it is now possible to save Syria. There is no path to resurrect a state that is failing, not so long as Putin has decided to do whatever it takes to preserve Assad’s awful regime and condemn Syria to endless conflict. We can, of course, make it difficult for Russia to resupply its forces in Syria. Already, some NATO allies, like Bulgaria and Turkey, have denied Russian aircraft over-flight rights. Iraq, too, appears to have turned back at least one aircraft.

And there is surely more we can do to shelter the millions of refugees now fleeing the conflict. Having helped create this mess with the invasion of Iraq and subsequent failure to stop the bloodshed in Syria, the United States and its European allies have an obligation to assist these people. This is especially true of those countries that were the loudest supporters of the invasion of Iraq. Coalition of the Still Willing, right? That includes you, Hungary.

But these measures won’t replace Bashar al-Assad with a figure who could rally moderate Syrians to restore a stable government, let alone stop the bloodshed. At best, they are only an expression of empathy and contrition. Putin has to be convinced to tell Assad it is time to go. Until then, and as long as Moscow is flooding Syria with military assistance, the country’s misery will continue.

The two U.S. allies have agreed to a marginal increase to help backfill the U.S. withdrawal.

Tinder and the Russian Intelligence Services: It’s a Match!