They don't differ materially from American views of the continent.

China’s ambitions in Africa are well-documented. Its annual trade with the resource-rich continent recently surpassed $200 billion, and Chinese agencies and firms have invested heavily in building badly needed roads, railways, and public buildings. Meanwhile, more than 1 million Chinese have reportedly left home to seek their fortunes in African nations.

Those ties may be drawing China and Africa closer, but that doesn’t mean everyday Chinese understand the continent terribly well. For example: “Why does South Africa have so many white people?” is the leading autocompleted result for queries about that country posed to Baidu, China’s largest search engine. Baidu’s autocomplete feature works similar to Google’s: When someone begins typing into the search box, an algorithm displays a list of suggested ways to finish the query, in part by combing the engine’s archives for previously popular searches. Those automatic suggestions often have the added benefit of sifting through layers of online discourse to uncover the profound and (often amusingly) mundane questions that often lead people to search for answers.

Below, Foreign Policy plots and translates the most common Chinese-language Baidu query associated with each African country onto the map below: 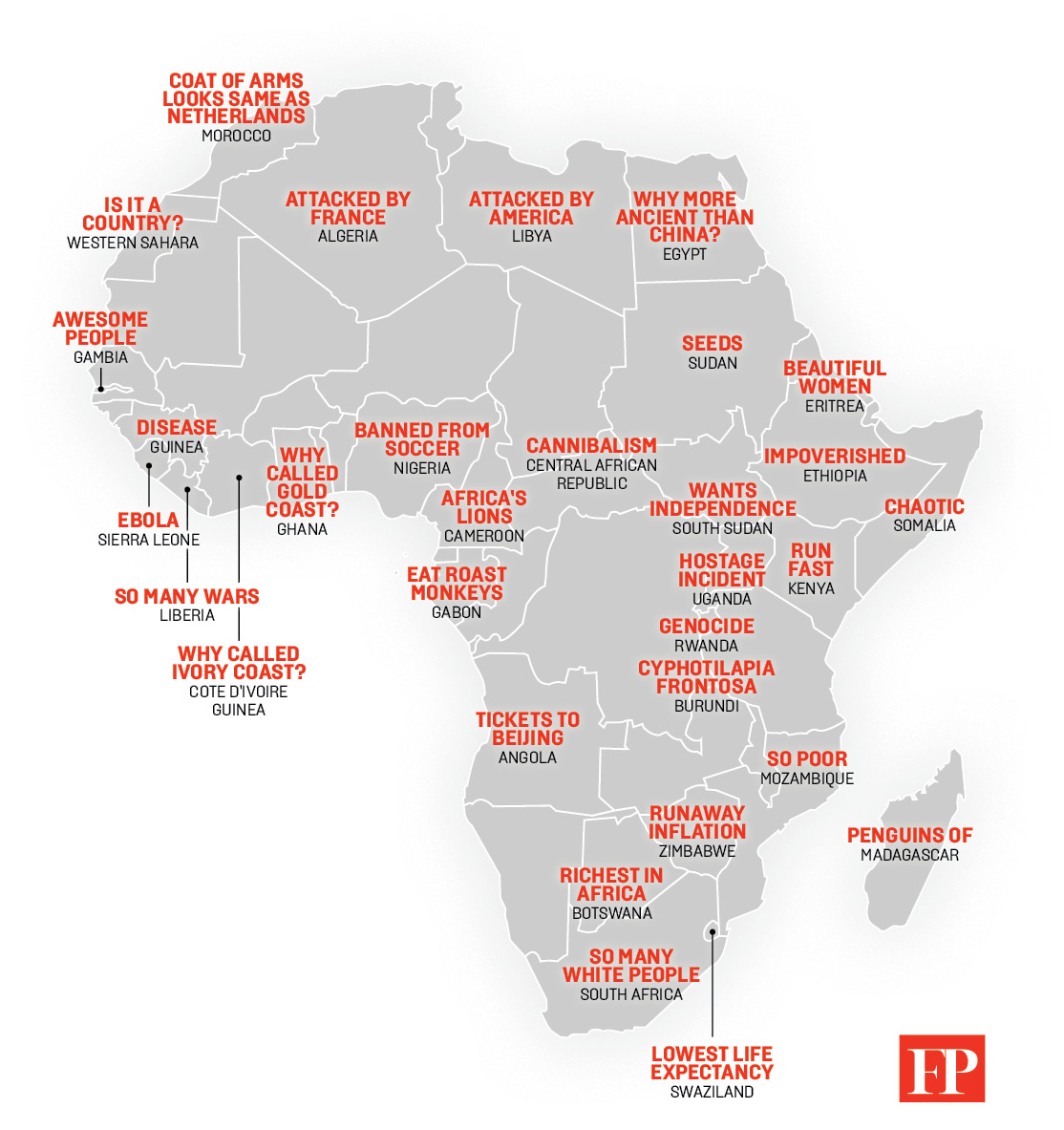 The leading queries for many African countries indicate that Chinese web users’ feelings about the continent mirror those of Westerners — they often associate it with violence, poverty, disease, and exotic dining habits. This is evident in country-by-country results but also is clear in searches about Africa as a whole: 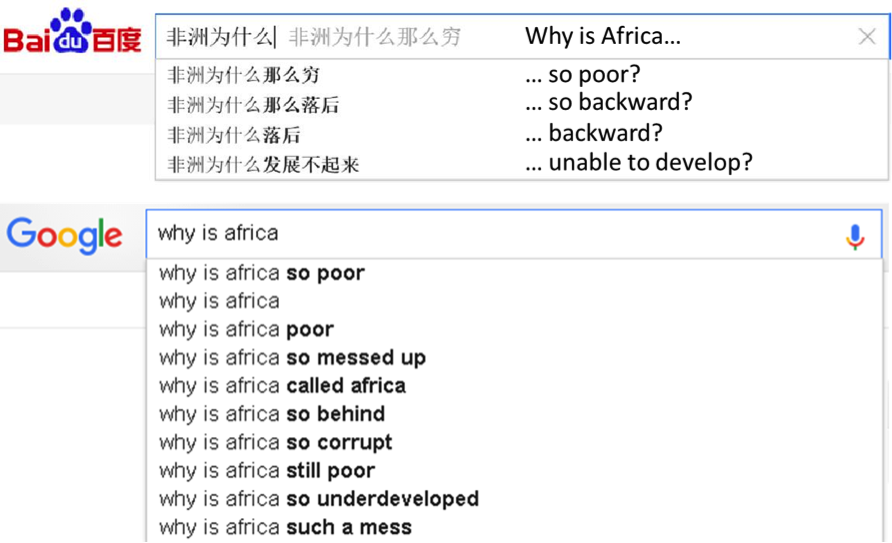 Certain results are uniquely Chinese. Baidu’s top suggestion for Egypt asks why that country is more ancient than China, indicating that the pride with which Chinese people compare their civilization’s long history to that of Europe, and especially to that of the United States, wilts somewhat in the shadow of the pyramids at Giza.

Issues handed down by Africa’s complicated history top the results for other countries as well. Netizens ask how Cote d’Ivoire and Ghana came to be known as Ivory Coast and Gold Coast, respectively. Queries about Algeria and Libya being attacked by French and U.S. forces hint at Western interventions old and new. And then there is the legacy of imperialism, apartheid, and reconciliation that accounts for the prevalence of Caucasians in Africa’s “rainbow nation.”

Perhaps the most puzzling result from either method simply asks why Gambians are so “nb” — an abbreviation of niubi, a Chinese slang term that loosely translates as a sarcastic spin on “awesome” (but which, in fact, means something far more vulgar). This search leads to multiple bulletin boards bearing a list of purported threats by the tiny West African nation to variously invade and occupy the Soviet Union, North America, and most of Europe, as well as help Taiwan complete its reconquista of the Chinese mainland. FP was unable to verify these claims independently, though in fairness they don’t sound out of place given past proclamations by the country’s colorful leader.

Searches about violence sometimes take on a Chinese twist with the word luan — usually translated as “chaos,” a freighted word often used to connote political and social instability. References to luan crop up in results for South Africa, but are most common in those of Somalia. Netizens also ask why what the Economist called “the world’s most utterly failed state,” Somalia, has no government, why it hates America, and why it has pirates.

On a lighter note, searches about soccer are common. The “African Lions” that top Cameroon’s suggested searches refers to that country’s national football team. Baidu also notes that Nigeria’s team is called the “Eagles,” though that search is dwarfed by multiple queries about that country’s brief ban from international competition last year. Recent headlines also inspired a leading result for the Central African Republic, where sectarian strife led to acts of cannibalism.

The methodology involved typing the question prompt “Why is [country X]…,” though limited results for some countries led in a few cases to FP’s casting a wider net by simply typing the country’s name to see what connections Baidu would autocomplete. This approach yields the out-of-left-field results for Madagascar, Burundi (a species of fish native to a local lake), and Sudan (the seeds of a local variety of sorghum), among a handful of others. This more open-ended method succeeded in generating the results for every country, although the map above does not plot countries that only yielded results common to many nations, including references to tourism, travel expenses, business visas, and the cost of freight. Searches to populate this map were conducted from a computer in Shanghai between Aug. 14 and Aug. 17, and results tend to change over time, so readers may not be able to replicate them precisely.

Image: Warner Brown and Ed Johnson for Foreign Policy. Do not reproduce without permission.

What Can Insurance Tell Us About the Capitol Mob?