How Does Pyongyang Prepare for a Rocket Launch?

An inside look at the outside of North Korea's best-known missile launch site.

Speculation is mounting over whether North Korea will conduct another long-range rocket launch by Oct. 10, the 70th anniversary of the founding of the ruling Korean Workers Party. In late September, Pyongyang forcefully asserted its right to “peaceful space exploration,” and stated that the world “will clearly see a series of satellites …. soaring into the sky.” And in early October, North Korea’s ambassador to the United Kingdom, Hyon Hak Bong, told the British think-tank Chatham House that “we will go ahead” with a launch (though he didn’t elaborate about the details).

Such a launch could contribute to North Korea’s development of an intercontinental ballistic missile (ICBM) — a missile that could carry a weapon from North Korea’s nuclear stockpile, and that might be able to strike the United States. It would also violate United Nations sanctions.

If North Korea were to launch a rocket in October, it would likely do so from the Sohae Satellite Launching Station (pictured above), located in the country’s remote northwest, near the Chinese border. This installation is North Korea’s only modern space launch facility, and the site of its two 2012 launches: Their April 2012 launch failed, but the December launch that same year appeared to have been the first and only successful effort by Pyongyang to place a satellite in orbit.

38 North, a website that publishes analysis by experts who have experience working in North Korea or with North Koreans, began observing Sohae through commercial satellite photography prior to the April 2012 launch. The photos below show a gradual but extensive modernization of Sohae, from August 2013 to late September 2015, highlighting Pyongyang’s determination to pursue a space launch program with bigger and better rockets — and to lay “a firm foundation for dynamically pushing ahead with the nation’s development of space science,” according to the director of the National Aerospace Development Administration, a North Korean astronomical organization.

They also help determine whether North Korea is planning a space launch around the 70th anniversary of the Korean Workers Party on Oct. 10. The answer appears to be no — although whether Pyongyang will conduct a launch later in October remains an open question. 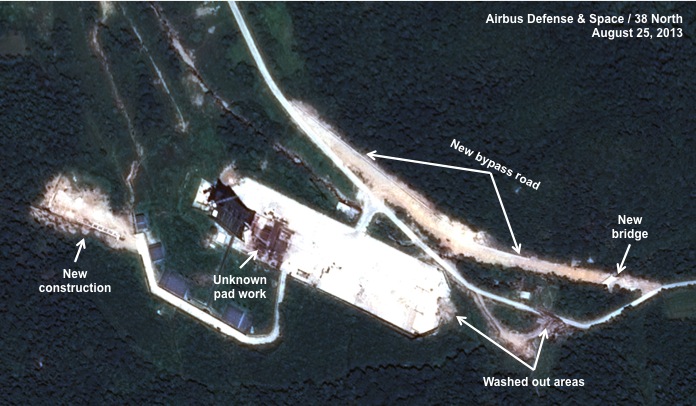 It is easiest to follow Pyongyang’s modernization program at Sohae by dividing their extensive effort into two phases. During the first phase, from mid-2013 until spring 2015, the North Koreans concentrated on construction at the launch pad that would allow them to handle a larger rocket than the Unha, (the roughly 100 foot-tall rocket launched in Dec. 2012.)

Their new rocket, which is probably still under development, will be able to place bigger and more sophisticated satellites into higher orbits than the Unha could. And the new rocket’s powerful new engine could be useful in building ICBMs. During the second phase, which began in spring 2015 and lasted until September 2015, the North Koreans built new facilities at the pad as well as a rail spur — a secondary rail line – underground that leads to a main train station, which hides key launch preparations.

The satellite imagery above shows work beginning at the base of the gantry tower — a crane structure used to support the rocket prior to launch. This tower was the site of North Korea’s two 2012 space launches. In August 2013, the purpose of the work showed in the photo was unclear; analysts later determined that the North Koreans were extending the gantry tower so that it could support larger rockets. 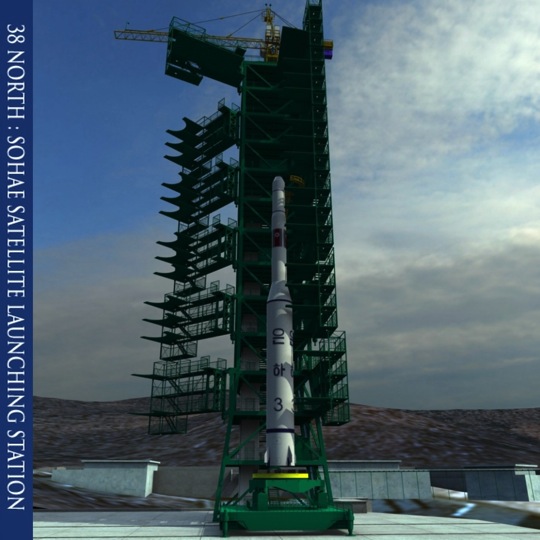 In January 2014, commercial satellite imagery showed that North Korea had made notable progress in upgrading the gantry tower. This rendering, created in February 2014, shows a tower rising roughly 80 feet above the 100-foot North Korean Unha rocket.

Here, movable service structures — the platforms that help support a rocket when preparing for a launch — are pictured open. When not in use, they are generally kept closed and shrouded. This keeps the arms and the gantry tower clean, and protects technicians from weather conditions while working. 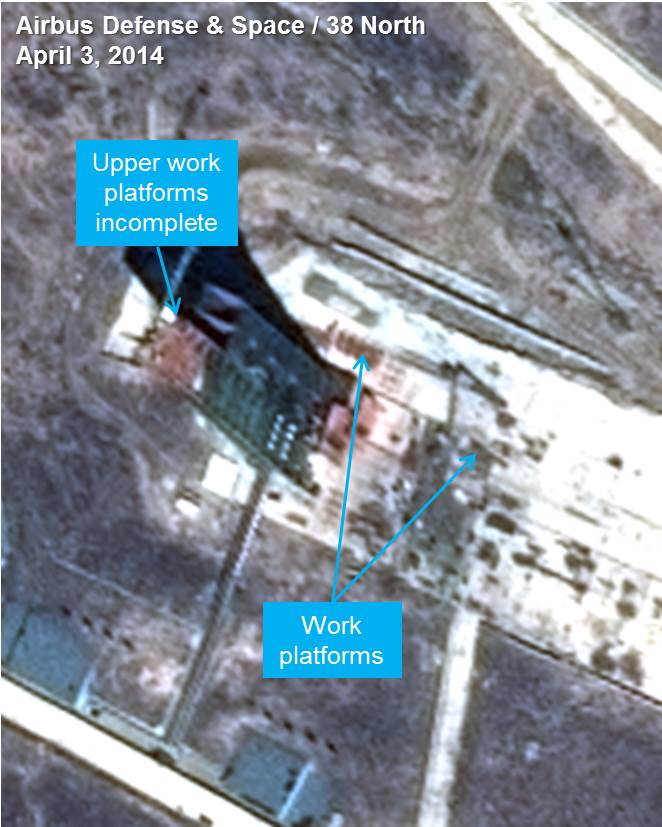 Work on the upper levels of the gantry tower continued throughout the spring of 2014. This satellite image shows work platforms being assembled on the launch pad. Workers added these platforms onto the gantry tower over the next few months. 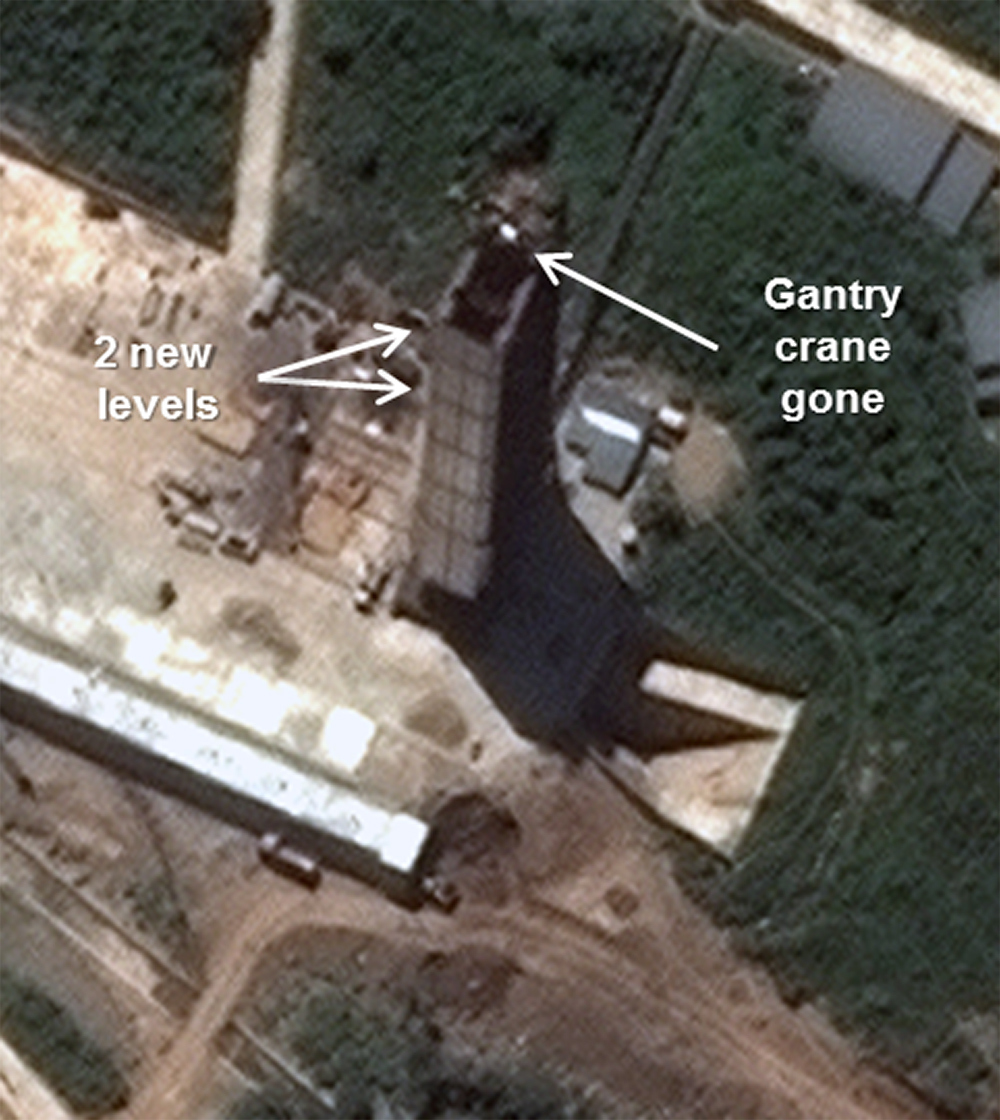 By early July 2014, North Korea had finished construction on the three upper levels of the gantry tower. The crane — used to help erect the rocket at the gantry — had been removed, indicating that they could have been planning to use a stronger crane to handle a much heavier rocket than the Unha. 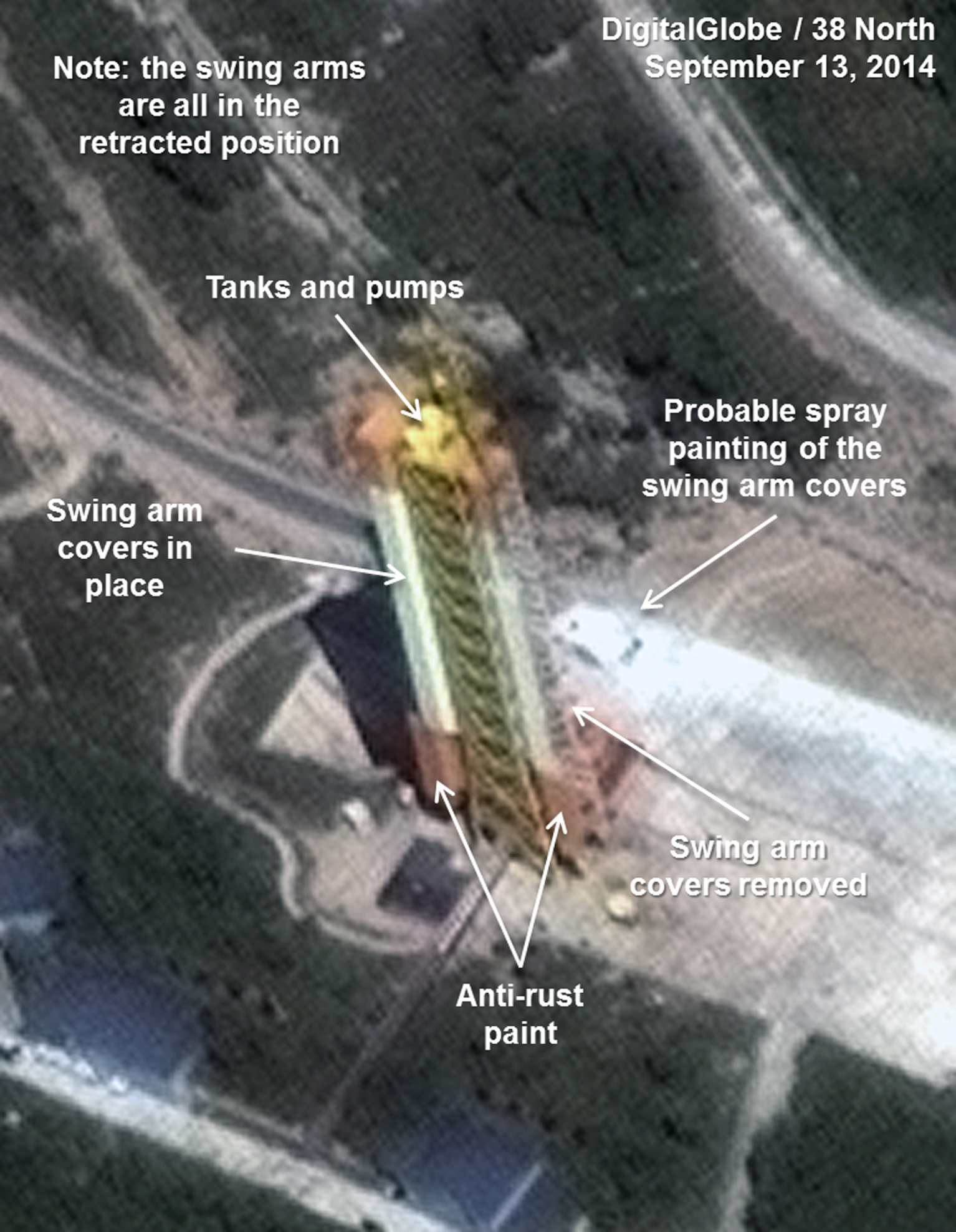 By September, workers had finished upgrading the gantry tower and added a fresh coat of paint — which may have been intended to help prevent the tower from rusting. In addition, new environmental covers provide an improved ability to both hide and protect the rocket. The gantry tower can now handle rockets up to roughly 165 feet in height. 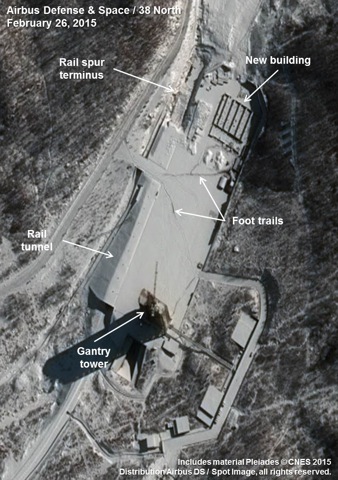 Having finished modifying the gantry tower so that it can now launch larger rockets, Pyongyang embarked on its next phase of construction: building an underground rail spur from a main rail station to the launch pad, to bring rocket stages and related equipment to the site; a rocket processing and assembly building at the east end of the pad, where technicians could examine those rocket stages; and a movable structure that would bring the rocket stages from that building to the launch pad before a launch. 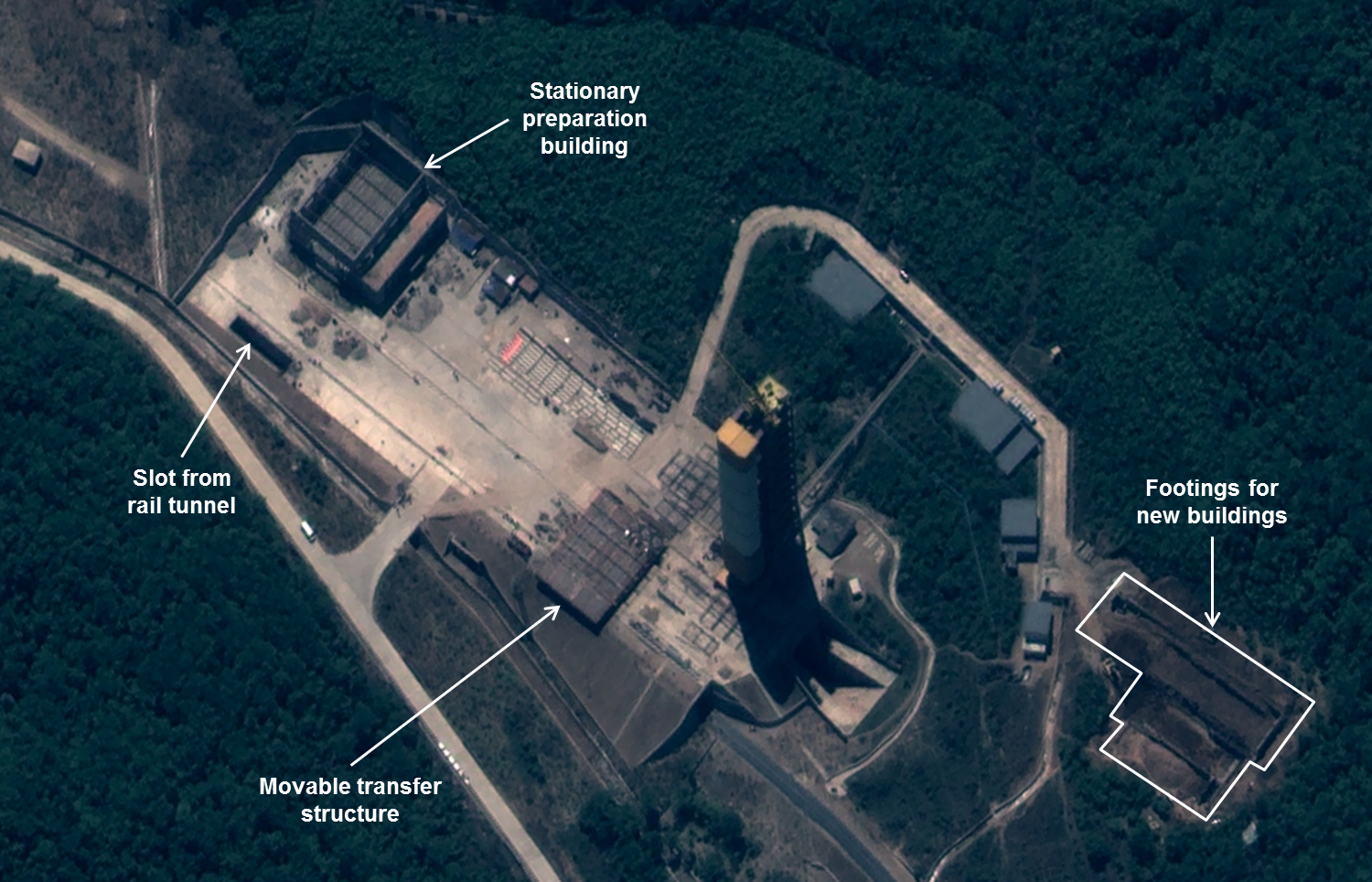 Three months later, satellite imagery showed progress on the processing and assembly building at the east end of the pad. In addition, the image shows the beginnings of construction of a movable structure that would come to rest over the slot from the rail tunnel, moving back and forth from the launch gantry. 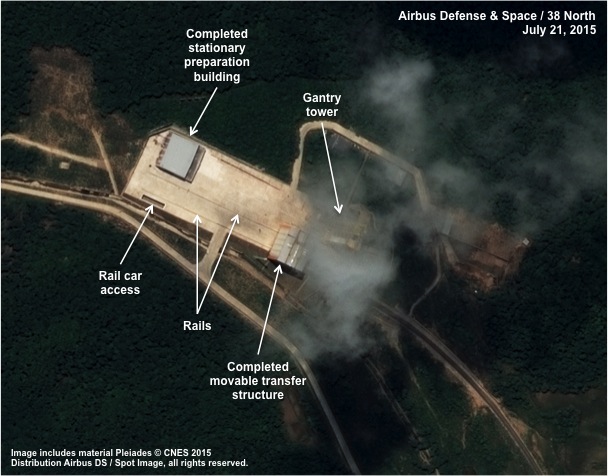 By July, construction on the vertical assembly building and movable transfer structure appeared to be complete. The rails on which it will move from one end of the pad to the other are now visible. 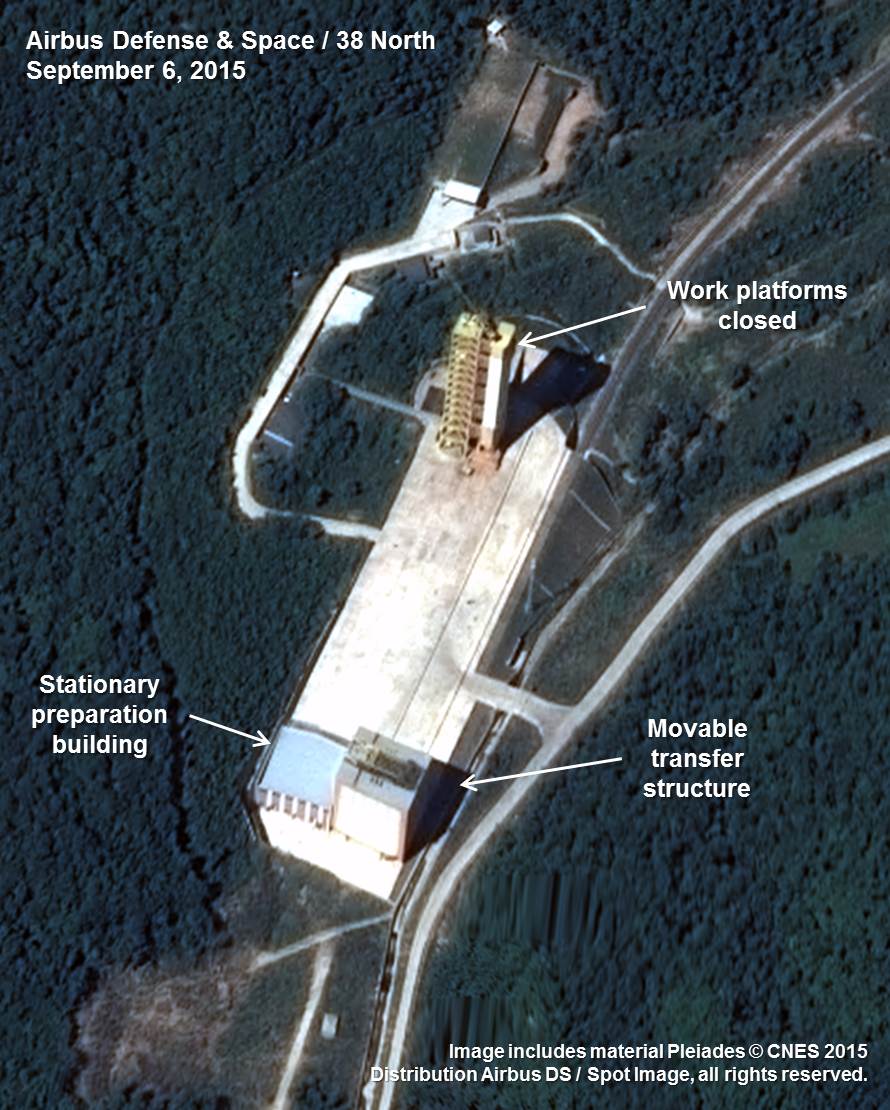 By September, another objective of North Korea’s construction program became clear: Pyongyang is now able to hide key preparations for a launch. In the past, the North Koreans moved rocket stages from the main rail station to a nearby final checkout building by truck, and then transferred them to the launch pad by truck. Both were visible from satellites. Now, those preparations take place in an underground rail spur leading to these new buildings on the pad. Movement is no longer visible.

This image is a clear shot of the launch tower. While the environmental shelter depicted in the satellite image may be hiding a rocket, experts believe that is unlikely. That said, if the North Koreans are planning an October launch, early September is still too soon to be placing the rocket at the gantry. 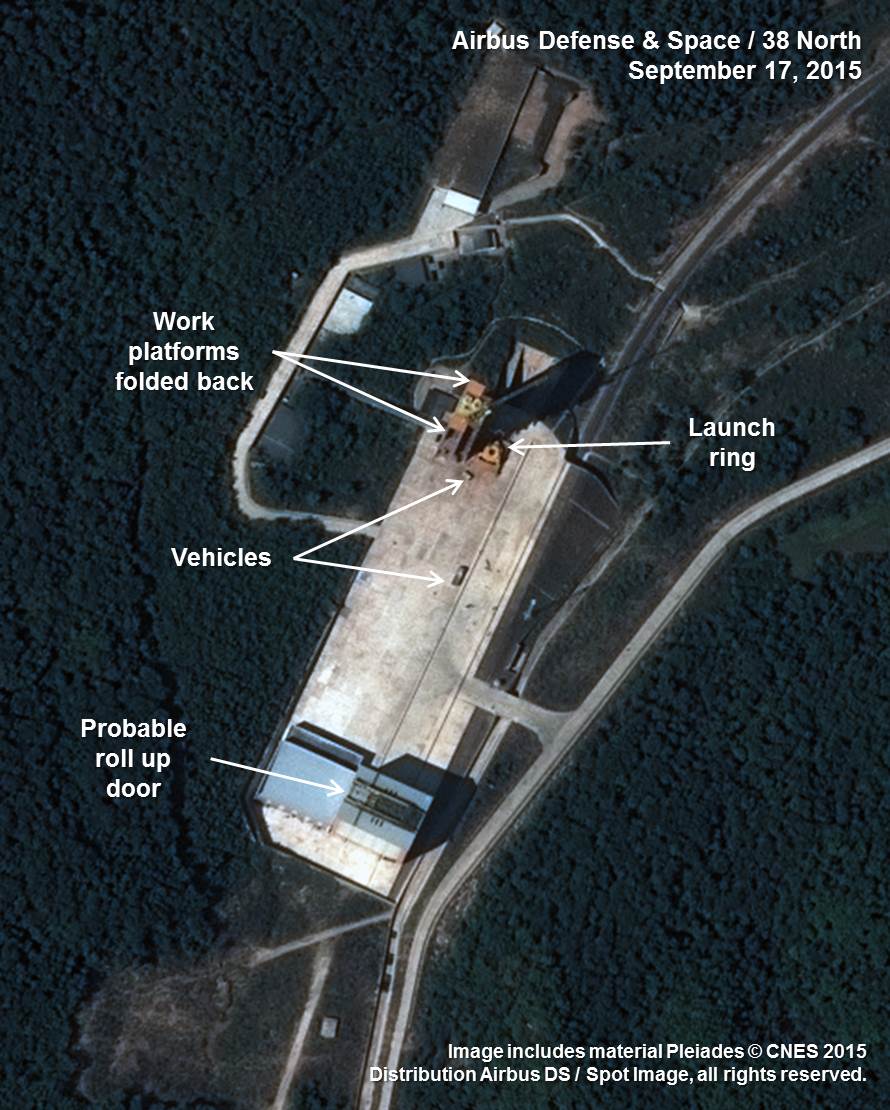 Two weeks later, the movable transfer structure is still at the south end of the launch pad next to the stationary vertical assembly building. The work platforms of the gantry tower now rest along its north and south sides, exposing the launch pad. There is no rocket present.

However, even if an October launch does not occur, Pyongyang’s modernization of the Sohae Satellite Launch Facility is a clear indication that we should take the North Koreans at their word. There will be more long-range rocket tests in the future.

38 north is a program of the US-Korea Institute at Johns Hopkins School of Advanced International Studies which draws on experts who have worked in or with North Koreans to provide analysis of that country.
View
Comments
Tags: Asia, Maps, missile defense, North Korea, North Korea Nuclear Test, nuclear