Snap Poll: Will China, Iran, and Russia Cooperate With the United States?

We asked IR scholars about the refugee crisis, the Iran deal, presidential reputations, and whether economic sanctions actually make a difference.

Chinese President Xi Jinping’s visit to the United States, the migrant crisis in Europe, and the speeches given by U.S. President Barack Obama and Russian President Vladimir Putin to the United Nations dominated the news when the Teaching, Research, and International Policy (TRIP) project at the College of William & Mary conducted its most recent snap poll of international relations (IR) scholars at the end of September. This poll, conducted in collaboration with Foreign Policy, is the seventh in this series. It includes responses from 694 of the 4,086 IR scholars at colleges and universities throughout the United States. (Read the complete TRIP snap poll results here.)

The more than four-year-old civil war raging in Syria has resulted in more than a quarter-million deaths and the displacement of over half of that country’s population. Increasingly, this internal catastrophe has spilled beyond Syria’s borders, most recently exacerbating the refugee crisis in Europe, and has led to calls for the United States and other Western countries to accept more refugees. In September, the U.S. State Department responded to the humanitarian crisis by increasing the number of refugees who will be granted asylum from 70,000 to 100,000. When asked about the new cap, just over 70 percent of the IR scholars surveyed said that they supported a further increase beyond 100,000, while just over 6 percent said the cap should be lower.

The public discussion on accepting refugees has been loudest in Europe, but the issue has also crept into the 2016 U.S. presidential race. Current Republican front-runner Donald Trump illustrates the complexity of opinions on this issue in his shift from support on humanitarian grounds for accepting additional refugees to opposition on security grounds. The chart below compares the views of public partisans to IR scholars on opposite sides of the ideological divide. Liberal scholars, who also constitute the majority of the sample, overwhelmingly support increasing U.S. efforts to accommodate refugees, but conservative IR scholars are only slightly more supportive than Republicans in the public. 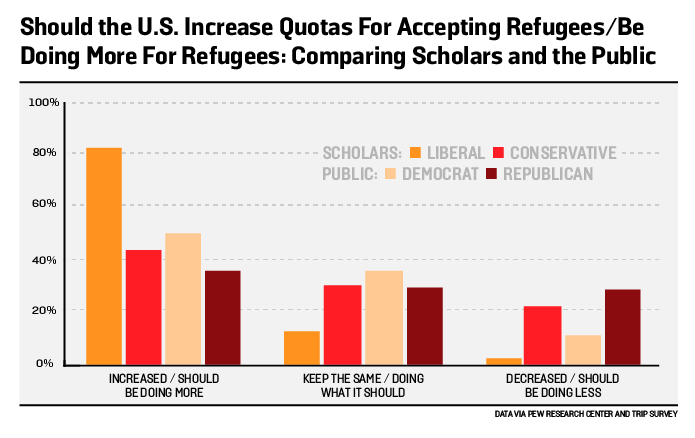 At this year’s U.N. General Assembly meeting, Obama and Putin espoused drastically different views on a range of issues. But, each leader’s speech included references — both veiled and explicit — to the other’s policies and reputations in areas spanning NATO, Ukraine, Syria, and the broader Middle East and North Africa. Both agreed, at least rhetorically, that the Islamic State is the main enemy in Syria. But they differed on the role that other rebels and Syrian President Bashar al-Assad should play in combating the Islamic State. Using a question from an ongoing research project by political scientists Joshua Kertzer, Keren Yarhi-Milo, and Jonathan Renshon, we asked scholars how recent events in Syria have affected the reputations of Putin and Obama. 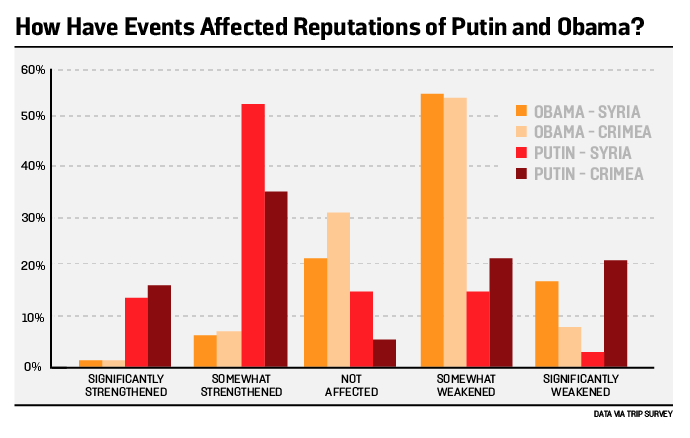 Scholars think that Obama’s handling of the Syrian crisis, on net, has negatively impacted his reputation. IR experts may not agree with Russia’s assertive actions in Syria, but this approach appears to have strengthened Putin’s reputation. To be clear, these questions were asked before Russia’s three-day bombing of non-Islamic State rebels. Time will tell how aiding Assad against the Islamic State and U.S.-backed rebels will play out, but some already suggest this will only exacerbate the reputation gap.

Scholars seemed similarly negative in their assessment of the impact of events in Crimea on Obama’s reputation. They were more divided, however, when evaluating the reputational effects for Putin. It is unsurprising, given scholars’ negative outlook for the consequences of events in Crimea on Obama’s reputation, that they were skeptical about the impact of U.S.-led economic sanctions designed to alter Russia’s behavior. These are the same sanctions that Obama touted from the podium at the U.N. General Assembly meeting.

Academics are much more positive about the effectiveness of sanctions against Iran than they are about those aimed at Russia. When asked how effective sanctions were in changing Iranian policy, scholars, on average, put them at about a 6 on a 0-to-10 scale. As the chart below illustrates, sanctions targeting other states were judged to be far less effective. 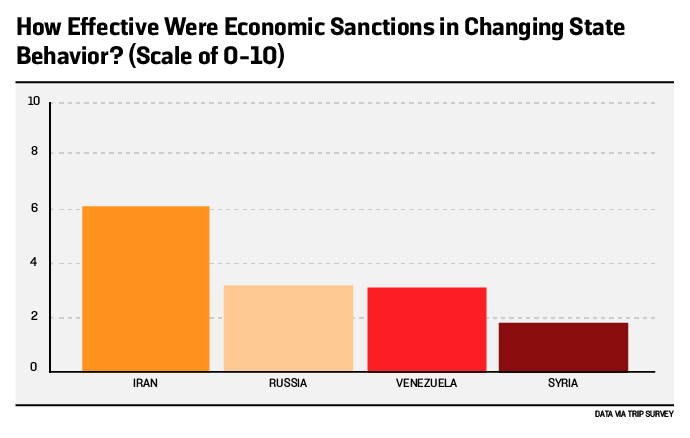 The same academic experts have strong (and growing) confidence in the effectiveness of the recently negotiated agreement between Iran and the international community, which is designed to ensure that Iran will not obtain a nuclear weapon. Fifty five percent agreed, and another 24 percent strongly agreed, that the recent deal with Iran provides international inspectors sufficient ability to monitor Iranian compliance.

As time goes by — and as details of the nuclear Iran deal have been publicly debated, have been endorsed by the U.N. Security Council, and have overcome opposition in the U.S. Congress — IR scholars have grown more optimistic about the substance of the deal. Between April 6 and Sept. 30, the proportion of IR scholars who believed that the verification protocols in the Iran deal would be effective increased from 57 to nearly 80 percent.

Large majorities of scholars judge the deal’s verification provisions to be sufficient. This is true across all the scholars’ issue areas, regions of study, theoretical approaches, and types of research method. Since April, each of these subgroups has grown more confident in the effectiveness of the inspection provisions. However, scholars’ political ideologies still affected their assessments of the Iran agreement. Those who describe themselves as conservative were far more likely than self-described liberals to doubt the efficacy of the Iran deal. 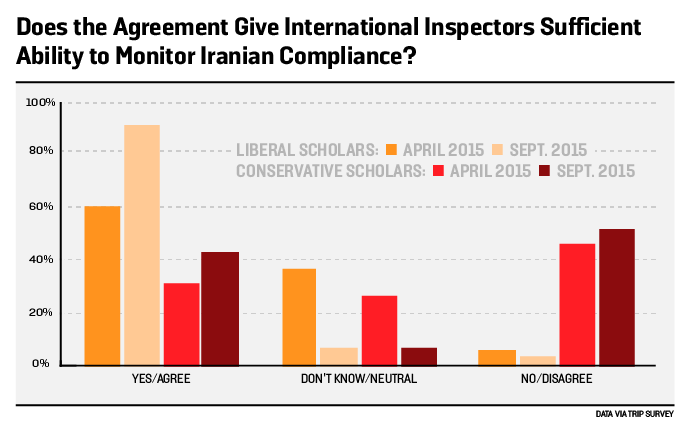 Some recent commentators describe the construction of airstrips in the South China Sea as 3,000-acre aircraft carriers that will shift the balance of regional power, while others see them as “sand castles,” meaning that they possess only limited staying power.

But as a group, IR scholars are not overly concerned that existing airstrips in the South China Sea will lead to conflict in the next five years, but they do worry about the possibility that China may build additional airstrips in the region. On a scale of zero to 10, scholars rate the likelihood of violent confrontation in the South China Sea with the current number of airstrips at just under 4. Should China build a second airstrip on Subi Reef, as some analysts claim it may be doing, IR scholars fear that the likelihood of confrontation climbs above 5. This survey was conducted less than one week before the U.S. government indicated that it is likely to increase naval patrols in the region as a direct response to the construction of this “Great Wall of Sand.”

Despite disagreement between the United States and China over territorial rights in the South China Sea, President Xi’s visit to the United States was marked by an explicit agreement to cooperate on cyber-enabled theft. Following 2014’s bilateral agreement to reduce greenhouse gas emissions, Obama and Xi announced a new agreement in which their two countries pledge not to engage in cyber-enabled theft of intellectual property from each other. When asked whether the agreement will successfully reduce the instances of cyber-enabled thefts, IR scholars appear quite skeptical. More than 51 percent disagree or strongly disagree that the agreement will be effective, and only 17 percent agree. Fewer than 1 percent strongly agree. Those who specialize in the study of international organizations are somewhat more sanguine: Nearly 29 percent agree that the cybersecurity agreement will be effective. As the chart below illustrates, IR scholars are neither inherently optimistic nor pessimistic about the efficacy of recent international agreements. They predict that some deals like the Iran agreement will be effective, while others like the cybersecurity pact will not. Time will tell in both cases. 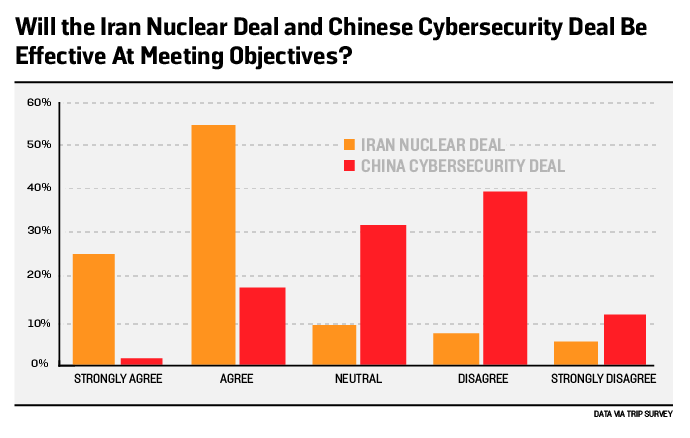 TRIP snap polls are conducted with support from the Carnegie Corporation of New York.

Clarification, Oct. 12, 2015: The authors used a poll question from an ongoing research project by political scientists Joshua Kertzer, Keren Yarhi-Milo, and Jonathan Renshon to ask scholars about how recent events in Syria have affected the reputations of Putin and Obama. An earlier version of this article omitted this attribution.

Ryan Powers is an assistant professor of international affairs at the University of Georgia’s School of Public and International Affairs and a co-editor of Bridging the Theory-Practice Divide in International Relations, from Georgetown University Press. Twitter: @rmpowers