Inside the MSF Hospital in Kunduz

An exclusive first look at the horrific aftermath of the U.S. attack in northern Afghanistan.

Photographs and story by Andrew Quilty

Warning: Some readers may find the following images disturbing. 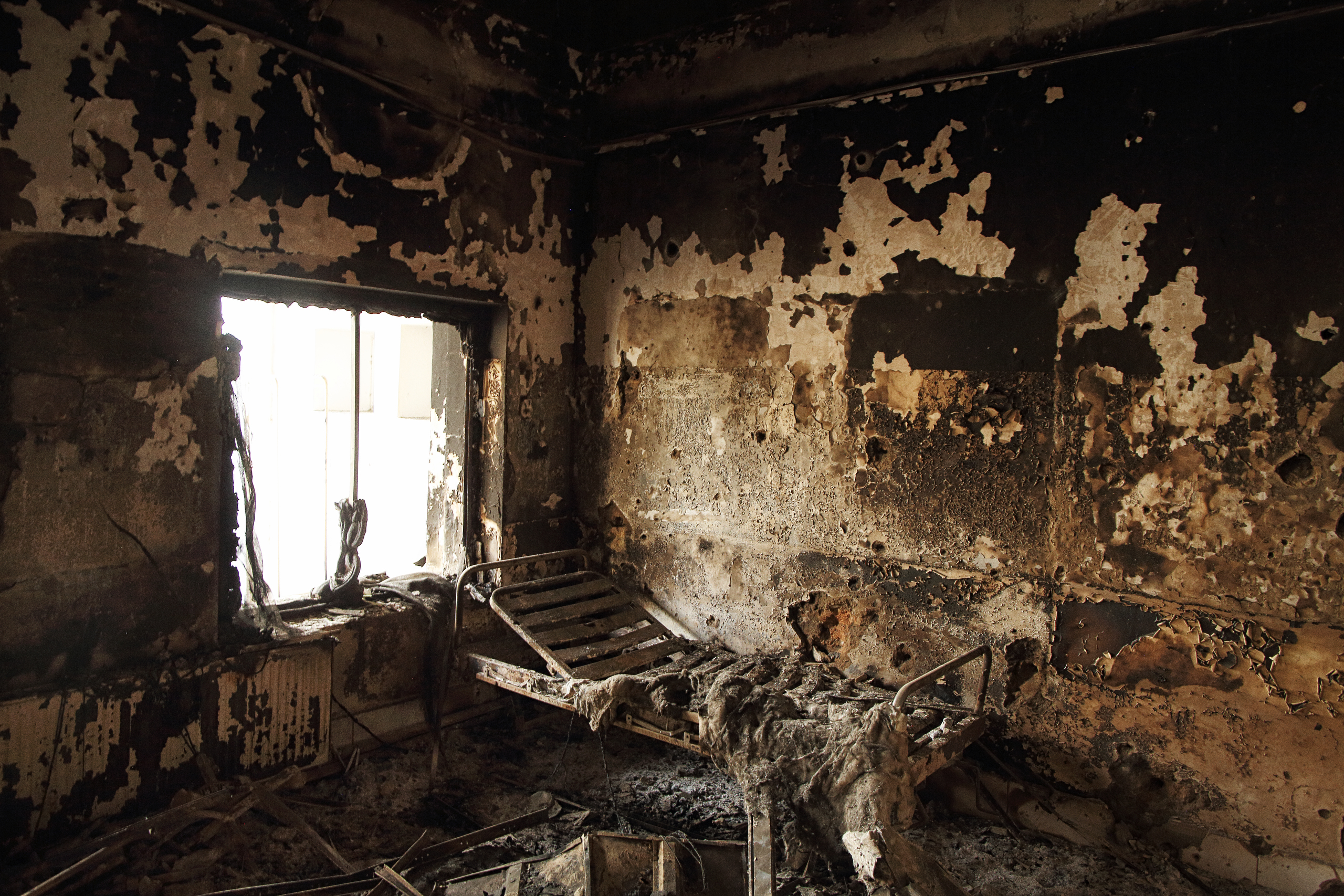 The remains of a bed frame in a room on the eastern wing of the Outpatient Department building.

KUNDUZ, Afghanistan — In the muted light of a hazy afternoon, the compound was silent. The graying walls of the outer gates, streaked with vertical mud stains, were largely undamaged, belying the devastation within. Torn foliage and broken branches were strewn about the grounds as if a storm had passed through the night before. After days of heavy fighting in Kunduz — and the resulting logistical obstacles — I had arrived at the Médecins Sans Frontières (MSF) Kunduz Trauma Center, or what remained of it.

The streets surrounding the compound were deserted and all the wider for the lack of parked cars. Adjacent to the hospital, the gaudy, three-story office buildings with faux bronze colonnades and reflective pink windows had been shuttered, bearing marks where stray bullets had cut into their facades. There wasn’t a person in sight.

The quiet was unnerving. Gun battles between the Afghan National Army (ANA) and a small number of Taliban — that had held out since the government counteroffensive was launched 10 days earlier — a few hundred feet away, toward the periphery of Kunduz from the hospital, had gathered momentum through the morning and peaked early in the afternoon. Embedded with the ANA’s 2nd Brigade, I watched on consecutive days as Taliban fighters — invisible but for the pop of their firing rifles — were painstakingly corralled by the soldiers, from mazes of mud-brick homes and light industrial buildings on Kunduz’s outskirts, into the city where, if all went according to plan, other ANA units would encircle them from the north. But by 2 p.m. on Oct. 10, apart from sporadic bursts, the sounds of war had become more distant. By 3 p.m., there was at least a semblance of respite across the south of the city, with only the occasional report of a Kalashnikov. The lull provided a window of opportunity in which to enter the city and access the hospital. A local driver agreed to take me to the site and confirmed the 10-minute drive would now be safe.

A room in the center of the Outpatient Department building's eastern wing.

Human remains seen in a doorway that opens into the central corridor of the Outpatient Department building.

It had been exactly one week earlier, at some point around 2 a.m. on Saturday, Oct. 3, that Afghan forces requested U.S. air support, saying they were coming under fire from Taliban fighters. The Afghan request was relayed through U.S. special operations forces in the area, and eventually an AC-130 gunship — essentially a cargo plane usually outfitted with powerful 40mm and 105mm cannons as well as 25mm Gatling guns — arrived overhead.

Survivors of the attack recounted multiple barrages coming at roughly 15-minute intervals, despite, as MSF, also known as Doctors Without Borders, has claimed, the desperate calls being made to both Afghan and coalition officials during the attack. The medical relief organization has also stated since the attack that they had provided all parties to the conflict with geographic coordinates for the facility. Twenty-two people were killed, including 12 MSF staffers and three children. Thirty-seven more were injured. MSF officials say they expect the death toll to rise as there are still people unaccounted for.

The closest point of entry to the hospital was in the rear via the south steel gate bearing a faded MSF logo. Inside, two plainclothes Afghan men — perhaps self-appointed caretakers — offered typically polite Afghan greetings. Besides these two men and two Afghan National Police officers I watched walk a lap of the building before disappearing again, the compound appeared abandoned. Two days earlier, several blocks from the MSF compound, I had witnessed a large group of Afghan police tormenting two young men they had arrested, accusing them of stealing medical supplies from the hospital. Despite this incident — at the time the police had told me the looting wasn’t an isolated case — it appeared on this afternoon that no visible effort had been made to secure the premises. 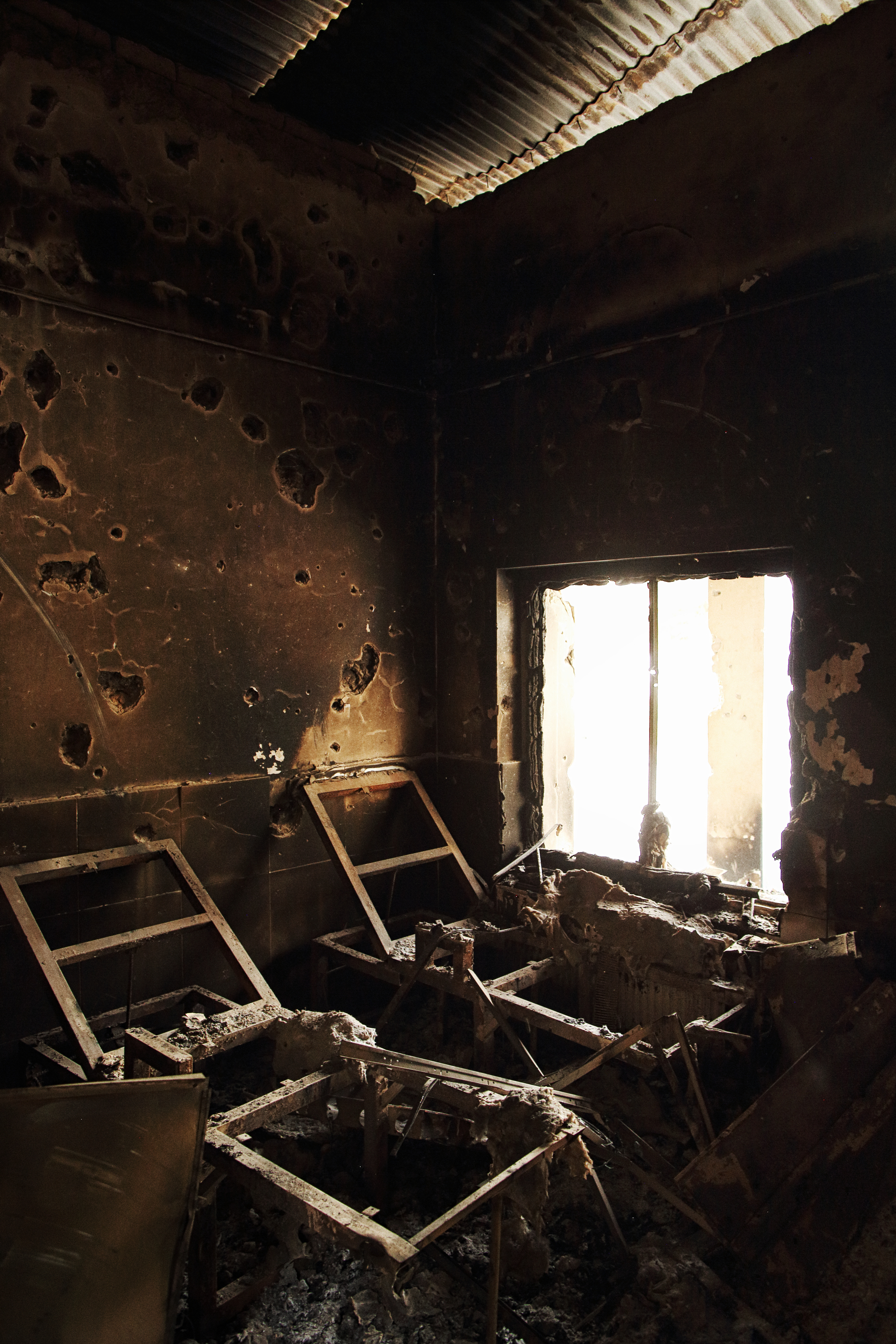 What appears to be the entry point of a large caliber round as seen from inside a room in the Outpatient Department building.

The westward view of the main corridor that runs the length of the Outpatient Department building.

Two rooms adjacent to the emergency entrance in the western wing of the Outpatient Department building.

Steel bed frames were some of the few recognizable structures that survived the blaze.

Two blackened corpses, barely distinguishable, seen on either side of the corridor that runs the length of the trauma center.

A small room on the western wing of the Outpatient Department building.

Chunks of concrete were dislodged from the footpath; air-conditioning units sagged from their brackets. Kinked window frames were empty of glass, and crumpled roofing iron stuck out bent and broken. Above the doorways, black soot stains streaked up toward the ceiling. Throughout the building, on all visible surfaces, there were wild and sporadic arcs of bullet holes. In other places, larger rounds had penetrated straight through the walls, leaving gaps some 2 feet wide in the solid brick.

Contained within the high compound walls, the smell of rot permeated from the main central building. Inside, masses of flies hummed over charred human remains. Most of the cement that covered the bricks of the internal walls had either crumbled under the impact of larger rounds or disintegrated under the extreme heat of the fire that engulfed the building. In the hallways, the floor was a mess of debris. Curls of corrugated iron hung limp and distorted from the remains of timber rafters. The ceilings were blackened by smoke and punctured by small rounds or flying debris, let in bits of light.

Walking through the roughly 40 rooms, bodies and remains lay scattered and, in most cases, alone. All but one of these bodies — or what was left of them — still in the facility were on the ground. Beneath one victim’s remains — otherwise indistinguishable but for a severed foot — were the white and pale blue squares of a hospital gown, almost completely intact.

Human remains and a hospital gown in a narrow corridor in the eastern wing of the Outpatient Department building.

A devastated room adjacent to the emergency entrance in the western wing of the Outpatient Department building.

As the sunlight began to fade late in the afternoon, the booms of rocket-propelled grenades and small arms began to break the silence in Kunduz again. I got back into the car of the local driver who had waited parked inside the gates and gestured farewell to the presumed caretakers while a cat purred out at us from under the guardhouse. As we passed back through the gates, I could see the exit points of bullets that had pierced through the metal sheeting from the inside.

The driver seemed unperturbed by the latest flow in fighting as he drove me out of the hospital’s grounds, away from the racket of gunfire, and back to the units from the ANA’s 2nd Brigade.

The fighting sounded as though it might be emanating from the street running along the compound’s eastern boundary or maybe a block beyond that. But now the sounds were strangely comforting, somehow making sense of the void that had once been a hospital.

Andrew Quilty is a freelance photojournalist based in Kabul. He was in Kunduz on assignment for Foreign Policy. Additional reporting was contributed by FP's chief national security correspondent Dan De Luce.