The War to Save Syria’s History

Maamoun Abdulkarim works for Bashar al-Assad’s government, but he says he serves a much higher purpose — saving his country’s culture from anyone who threatens it.

DAMASCUS, Syria — Antiquities chief Maamoun Abdulkarim will sound the alarm to anyone who will listen. Palmyra, a symbol of Syria’s ancient culture, will be completely destroyed after six more months under Islamic State control, he warns. Bitter enemies like Bashar al-Assad and the Free Syrian Army can fight it out elsewhere, but Abdulkarim wants them to make an exception there, joining forces against the Islamic State to save what’s left of Queen Zenobia’s historical kingdom.

“Politicians have the right to talk about the rest of the Syrian crisis but not when it comes to Palmyra,” he said, with a flash of anger in his office at the shuttered Damascus National Museum. “Palmyra is the cultural capital of Syrian civilization. We must support anybody who will help save Palmyra from ISIS: the Syrian Army, the Russians, the Americans, even the moderate Syrian opposition.”

Such talk isn’t heard anywhere in the part of Syria controlled by President Bashar al-Assad, especially not in a government official’s office. In some quarters of government-controlled Syria, it would be considered treason to advocate teaming up with the opposition for any cause. But Abdulkarim is unlike most Syrian government figures, and so is his mission.

“I am in charge of saving the patrimony of Syria,” said Abdulkarim. He’s on leave from a professorship at Damascus University and has refused to take a salary from the government. “I work for free. I have the right to say what I want.” 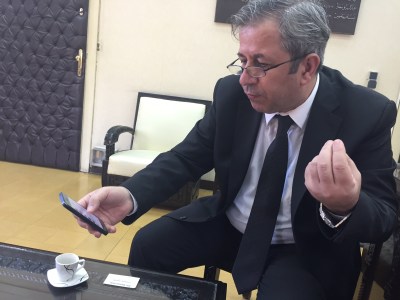 Abdulkarim, an archaeologist by training, has undertaken the profoundly frustrating — if not entirely doomed — job of trying to save Syria’s cultural patrimony during a time of war. But while the Islamic State’s destruction of some of the famous artifacts in Palmyra momentarily galvanized world opinion, the major actors in Syria’s conflict have largely responded with a shrug.

For Abdulkarim, the world’s indifference to the destruction of Syria’s ancient culture has transformed the war into an epochal, but entirely avoidable, historical tragedy.

“After some years, the war will be over,” he said. “And we’ll cry and say, ‘Because of your political differences, you allowed Palmyra’s destruction.’”

The Islamic State swept into Palmyra in May, and today its henchmen are digging up whatever they can sell and systematically blowing up the rest. An oasis city that sat astride ancient trade routes connecting Rome and Persia, Palmyra is the site of the some of the best-preserved artifacts of those ancient civilizations, beloved by archaeologists and travelers alike. The Islamic State has condemned Palmyra’s structures as idolatrous, even parts of the site that never had a religious use. Since May, the jihadi group has destroyed some of the ancient city’s best-known artifacts: the temples of Baalshamin and of Baal and the triple arch that celebrated Rome’s victory over the Persians. Syrians also cherish the memory of the 3rd-century figure Queen Zenobia, who led a rebellion against Rome and called the city her capital.

When war broke out, Abdulkarim was an archaeology professor at Damascus University who had never expressed any interest in working for the government. But when the fighting spread and began to destroy celebrated historical sites in Aleppo and elsewhere, he reconsidered. He had watched with a sense of shame the plunder of Iraq’s antiquities a decade earlier, after the U.S. invasion in 2003.

“I didn’t want the same thing to happen here that happened in Iraq,” he said. He accepted the job after securing a promise of complete autonomy.

At first, he said, many archeologists and NGOs avoided him because of their boycott of Syrian regime figures, but he has doggedly touted his independence.

“Politics [change], but patrimony remains for [generations] to come,” Abdulkarim said. “We were founded in 1919. Many governments have changed since then. We are doing the same work.”

Abdulkarim envisions a global alliance joining the battle against the Islamic State for humanity’s conscience. But he is also practical man and exasperated that neighboring countries don’t help in small ways to fight the trafficking of historical artifacts. Of all Syria’s neighbors, he said, only Lebanon has cooperated with the Syrian government to fight smugglers. Countries like Turkey and Jordan, which shun any contact with Syrian officialdom, could still thwart the illicit trade in other ways, he said, such as publishing photographs of confiscated artifacts so that independent archaeologists could track the locations of looting.

From an archaeologist’s vantage point, all the major players in Syria’s proxy war are but a blip on history’s radar. Islamist fundamentalists, supporters of Assad, even superpowers like Russia and the United States are newcomers compared even to the youngest monuments in Syria.

The country’s best-known sites span almost every major period of recorded human history since the invention of writing five millennia ago, from a vast trove of early tablets roughly 4,000-years-old to the desert kingdom of Palmyra that reached its apex approximately 2,000 years ago to the stunning artifacts of the Crusades and the Islamic era.

All of it is up for grabs. Once destroyed or dispersed on the world’s underground market, it will be forever lost to scholars, visitors, and to the Syrian people who have derived some of their sense of identity from the layers of history in their land. A Dartmouth University study published last month in Near Eastern Archaeology claims that at least a quarter of Syria’s archaeological sites have been looted since 2011. While the Islamic State appears to be the worst offender, the study found, there have been extensive losses from sites nominally under the control of the Syrian government and anti-Islamic State rebel forces.

Abdulkarim tries to keep track of it all and is ecumenically angry at any group that smuggles antiquities. Most nights, the 48-year-old archaeologist said he can’t sleep, plagued by anxiety about thousands of historical sites under his supervision that he feels powerless to protect. His employees continue to work all over Syria, including in areas controlled by the Islamic State, as well as less extreme factions.

Before the Islamic State took the city, archaeologists had moved all the smaller artifacts to Damascus for safekeeping. It wasn’t possible to take the 15-ton Lion of Athena statue, so they hid it on the Palmyra site in a metal box packed with sand. The Islamic State carefully unpacked the statue so they could wrap it in explosives and destroy it.

“We protected it from accidental damage,” Abdulkarim said. “We were never expecting intentional destruction.”

Abdulkarim’s guardians of Palmyra’s heritage still operate there on the government’s payroll — but surreptitiously. Their local guru, archaeologist Khaled al-Asaad, was widely beloved in Palmyra and was beheaded by the Islamic State in August.

The men in Palmyra watching over the city’s heritage send Abdulkarim photos and reports by WhatsApp. He was in the middle of a conference in early October — paradoxically, the subject was post-war planning to rebuild and repair Syria’s monuments — when he learned by chat message that the Islamic State had destroyed Palmyra’s triple arch.

In some locations, Abdulkarim said, employees of his office, the Directorate-General of Antiquities and Museums, have mobilized locals to protect heritage sites from rebels and, in some cases, have persuaded rebels themselves to help. In others, they have simply documented the destruction.

“Look at these, for example,” he said, pulling up a chat thread on his smartphone. He swiped through a series of photographs of broken statues and artifacts from a site in Idlib province. The names of rebel groups Ahrar al-Sham and Liwa al-Shaheed were spray-painted on the walls. “I can’t publish these yet, in order to protect my informant.”

But even as much of the country remains beyond his grasp, Abdulkarim has set about preserving whatever artifacts he can get his hands on. His first act was to close every museum in the country and ship every portable object into secret vaults for safekeeping. As a result, he said, 99 percent of the artifacts from the museum in Palmyra were spared the looting and destruction of the Islamic State.

The bare exhibition halls of the National Museum in Damascus are now a staging ground for teams of archaeologists and workers who process the rescued artifacts. One of Abdulkarim’s former students, archaeologist Mayassa Deeb, put on hold her doctoral dissertation to supervise a team that photographs and then carefully packages artifacts from around the country.

“Because of the war, they asked all the archaeologists to work,” Deeb said. Many of her colleagues have fled to Europe, and the government’s rescue effort is short-staffed. “They need us.”

In Deir Ezzor, now an Islamic State stronghold on the Iraq-Syria border, employees of the antiquities and museums directorate hurriedly wrapped 16,000 cuneiform tablets in paper towels, packed them in plastic boxes, and shipped them to Damascus. For the last five months, Deeb’s team has been processing them: Each one is photographed, added to a database for researchers, and then carefully wrapped in linen. The tablets are placed in small Tupperware containers, which are then packed in wooden crates lined with thick foam for storage in a safe location.

Today, Abdulkarim’s desultory agenda reflects the sad state of Syria’s civil war, which has engulfed almost every community in the country. He tries to keep track of what sites have been destroyed, damaged, or looted. In areas restored to government control, like the Krak de Chevaliers castle and some other Crusader sites on the coast, he has already begun repairs. And for those areas heavily damaged, like the Old City and Citadel of Aleppo and Palmyra, he resolutely coordinates plans so that restoration can begin immediately upon the end of hostilities.

If plans and personnel aren’t in place to immediately secure heritage sites, Abdulkarim fears the post-war period could cause even more damage, as looters move in or returning civilians build on or accidentally deface important sites.

“We have two choices,” he said, his voice rising. “Either we stay as we are in silence: sad, passive, watching. The second choice is the Syrian army must advance on Palmyra with the help of the international community: Russia, the United States, everyone.”

Although he’s talking about one ancient city, it also sounds like he’s talking about his entire country — a place where a secular Muslim with Armenian and Kurdish ancestry like himself could make a career out of studying the millennium-old civilizations that had their roots in the Syrian landscape: “All the world must save a civilization that is in the process of getting wiped out.”