It’s the Scariest Halloween Costume a Palestinian Might Imagine

Israeli Prime Minister Benjamin Netanyahu is set to visit the White House next month, and what better way to commemorate his visit than by dressing up your child as a member of the Israel Defense Forces for Halloween?

Amid a recent escalation in tensions between Israelis and Palestinians, American retailers, including Walmart and Amazon, are being criticized ahead of Oct. 31 for selling a kids’ version of the IDF uniform, complete with a hat, pants, belt, and a shirt featuring Hebrew writing — all for less than $30.

Dozens of Palestinians have been killed by Israeli forces across Jerusalem, the West Bank, and Gaza Strip over the past month. And this week, Netanyahu reportedly floated the possibility of revoking residency Palestinians living in East Jerusalem, which they consider their rightful capital. The IDF claims it has acted out of self-defense after being threatened or attacked by Palestinians, some of whom were reportedly armed with knives.

Potential Wal-Mart customers were not amused by the suggested costume. One wrote the American superstore “might as well sell a Hitler outfit.”

“Your little one can now go to his friend’s house, and take over their bedroom, and all of their toys and claim that God has given him/her the right to take it,” another user wrote. 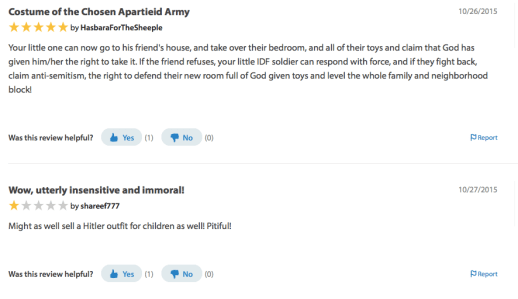 On Amazon, which is selling the costume through a second-party retailer called Dress Up America, the costume is rated one out of five stars and had 125 comments by Tuesday morning.

“The costume’s missing the bloody hands,” one person wrote. “Not very authentic!”

Wal-Mart has also been criticized for selling a fake nose described as a “Sheik Fagin” nose. The model wearing the large nose is dressed in traditional Arab dress, and the accessory is described as a “latex prosthetic nose perfect for an Arab Sheik.”

Correction, Oct. 27, 2015: Benjamin Netanyahu is the prime minister of Israel. A previous version of this article mistakenly said he was the president of Israel.