The onetime heavyweight champ has been ousted.

Which country packs away the most calories in a day? Who is smoking like it’s going out of style? And where in the world does liquor flow most freely? According to a new study, three European countries — Austria, Greece, and Lithuania — now top these lists of casual immoderation. But while enthusiastic consumption of tobacco and alcohol correlates with higher mortality rates, not all overeating is created equally.

Earlier this week, using data from the Organization for Economic Cooperation and Development (OECD), addiction treatment provider Recovery Brands released a package of charts and analysis parsing trends in consumption between 2004 and 2013. While the report tracks upward trends in calorie consumption across the world, those calories have produced markedly different impacts. The United States has typically been touted as the worldwide heavyweight champion boasting an average per-person intake of 3,639 calories per day according to the latest OECD stats. Now, Austria appears to be the most ravenous country in the world, chowing down on 3,784 (and with a decade average of 3,796) but without the same deleterious effects. While roughly one-third of Americans qualify as obese, only 18.5 percent of Austrian women and 23 percent of men are officially considered overweight, according to data from Britain’s World Obesity Federation. 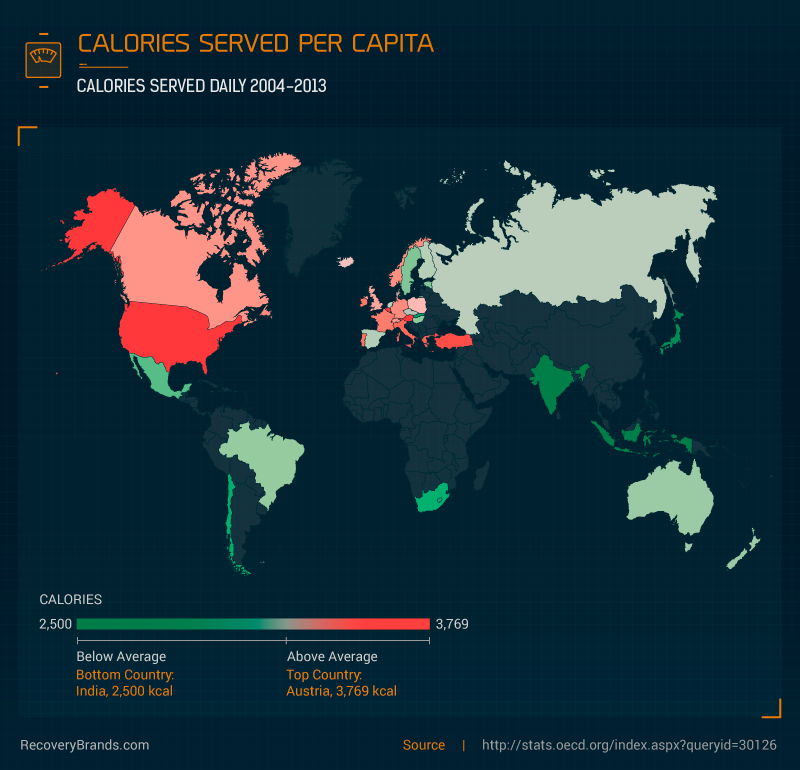 That trend seems to be true for other European countries, too. As the report notes, “Belgium, a country serving just as many calories per capita as the United States, has a remarkably low 10% obesity rate. Conversely, people in Mexico and Chile have access to fewer calories than many countries but have obesity rates near the top of the list.” Still, in almost all regions measured, people are eating more — the notable exception being former Soviet countries. That means conditions such as heart disease and type 2 diabetes, which are associated with unhealthy eating and contributed to an estimated 16 million preventable deaths due to noncommunicable diseases in 2014, will presumably rise, too. 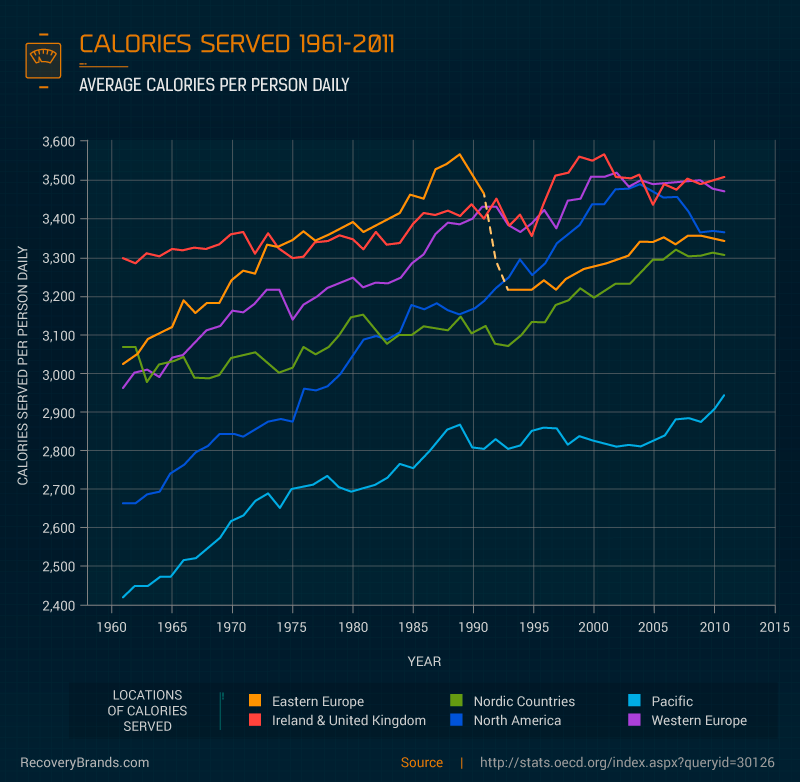 The correlations between drinking, smoking, and negative health outcomes, however, are higher. The World Health Organization gave Lithuania, which tops the rankings for alcohol consumed per capita, the highest score on its “years of life lost” scale based on alcohol-attributable deaths. Greece, ranked as the world’s No. 1 consumer of tobacco, consumes an average of 3,336 grams of tobacco per person per year. According to the Tobacco Atlas, a creation of the World Lung Foundation and the American Cancer Society, some 30 percent of male deaths in Greece are tobacco-related — the fifth-highest rate behind Armenia, Bosnia and Herzegovina, Turkey, and North Korea, which tops the list at 34 percent.

The data used has some notable gaps, lacking data for much of Africa and large swaths of Asia, but it does provide a notable window into consumption in high-income countries.

In general, the world is drinking and smoking less, even as it’s eating more. Eastern Europe is the only place in the world that has reported an upward trend in tobacco consumption since the 1960s. North Americans, on the other hand, smoke about one-third as much as they did in 1960, when they burned through an average of some 4,400 grams of tobacco per person annually.