The very real and very scary details of the nuclear drone Russia wants to build -- and how the U.S. needs to respond.

By Jeffrey Lewis, director of the East Asia Nonproliferation Program at the Middlebury Institute of International Studies.
November 12, 2015, 10:37 PM 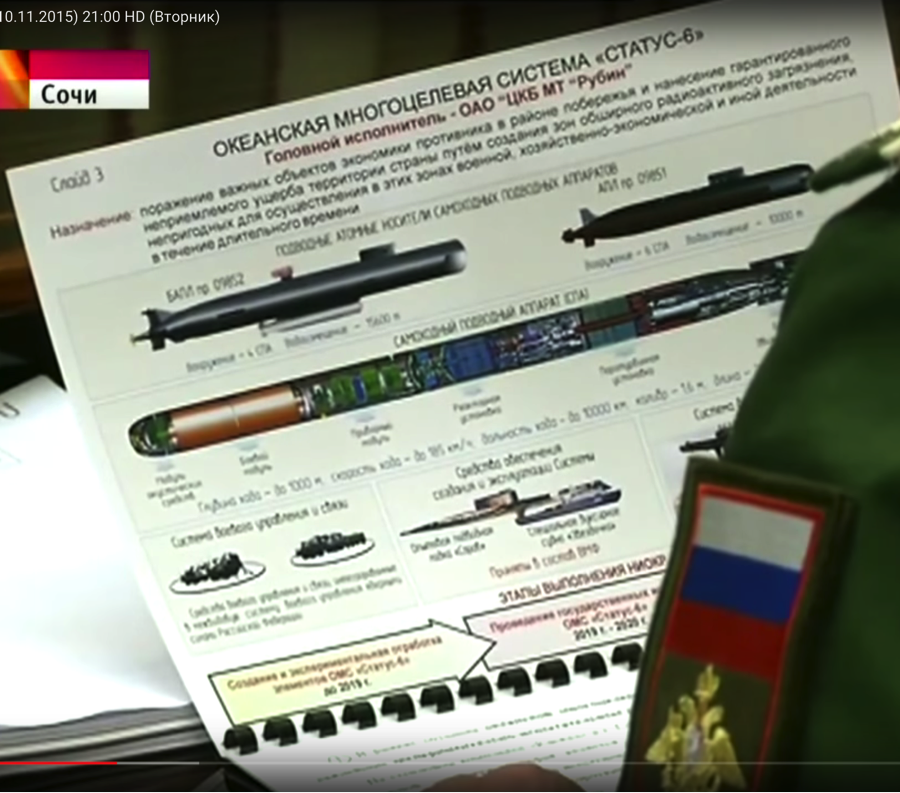 It’s nothing less than an underwater drone designed to carry a thermonuclear weapon into foreign ports. If detonated, Status-6 would be capable of dousing cities like New York in massive amounts of radioactive fallout.

At the risk of understating things, this project is bat-shit crazy. It harkens back to the most absurd moments of the Cold War, when nuclear strategists followed the logic of deterrence over the cliff and into the abyss. For his part, Putin seems positively nostalgic.

The Russian government reacted to the broadcast of the briefing-book images as if a major security breach had occurred. The offending footage was edited out of future broadcasts, and when asked about the incident, a Russian presidential spokesperson said: “Indeed, some secrets hit the camera lens, so were subsequently removed. We hope that in the future this will not happen again.”

The Russians doth protest too much. As Dr. Strangelove observed of the Soviet doomsday machine, “Of course, the whole point of a doomsday machine is lost if you keep it a secret!” (As an aside, it’s worth noting that Status-6 bears more than a passing resemblance to the weapon in that Stanley Kubrick classic; more on that in a bit.)

This isn’t the first we’re hearing of such a project. Details of a similar Russian nuclear underwater drone, armed with a megaton-class thermonuclear warhead, were reported this fall by Bill Gertz of the Washington Free Beacon. (Whatever you think of Gertz’s right-wing politics, he gets some decent scoops.) Gertz’s sources seemed to be describing the same system revealed this week, though they gave him a different name — Kanyon, rather than Status-6. (That shift in nomenclature shouldn’t come as a surprise: Russian military hardware acquires multiple names and numbers as it goes through research and development.)

The briefing-book slide fills in plenty of details about the project. A Russian attack submarine would be able to carry one or more of the drones, which could be remotely launched into the sea. The specs on the slide seem a little optimistic, but they suggest that once roaming wild, the underwater drone could travel a total distance of 10,000 kilometers, or 5,400 nautical miles. It would be designed in such a way that it could be navigated undetected into a U.S. port where it could then detonate its “combat payload” — a thermonuclear weapon. The system would never come up for air or encounter any pesky American missile defenses.

That’s bad enough, but the slide contains an additional gruesome detail: The purpose of the warhead would be to damage “the important components of the adversary’s economy in a coastal area and [inflict] unacceptable damage to a country’s territory by creating areas of wide radioactive contamination that would be unsuitable for military, economic, or other activity for long periods of time.”

The slide doesn’t explain how the bomb would produce unusually large amounts of radioactive contamination, but it could make use of a concept in nuclear weapons design called “salting.” That involves placing metallic elements around a bomb to capture neutrons and breed radioactive isotopes that maximize the fallout hazard. If the radiation case for a thermonuclear weapon is made with, say, cobalt, the nuclear explosion will likely produce a significant amount of long-lived radioactivity.

This isn’t the sort of dirty bomb that terrorists might build to spread a small amount of radioactive material about and cause panic. We’re talking about a massive, megaton-sized thermonuclear weapon designed to produce significant, long-lasting radiation effects. The first edition of the classic book The Effects of Nuclear Weapons, by Samuel Glasstone and Philip Dolan, had a whole section on radiological warfare, including detailed descriptions of nuclear explosions in shallow water. It turns out the fallout is awfully nasty if you build a bomb capable of sucking up ground material into the explosion. Nearby cities can expect a radioactive slurry to rain down from the skies. This section, by the way, was taken out of later editions as radiological warfare fell out of vogue.

It’s no coincidence that the apocalyptic “doomsday machine” from Dr. Strangelove comprises a series of very large salted nuclear weapons. Status-6 is obviously intended to produce a local, not global, environmental catastrophe — but that’s plenty terrifying. It would be hard to describe the horror that would result from setting off a thermonuclear weapon jacketed with something like cobalt in New York City’s East River.

What sort of sick bastards dream up this kind of weapon? Whether or not the Russians ever build it is almost beside the point. Simply announcing to the world that you find this to be a reasonable approach to deterrence should be enough to mark you out as a dangerous creep.

Of course, it is hard to know how seriously to take the briefing slide. Russian observers have expressed a healthy dose of skepticism. But I get the sense that no one in the Pentagon is laughing — and nor should they be. I’ve written before about the U.S. government’s deployment of JLENS blimps as a response to the threat posed by Russian cruise missiles lurking off the eastern seaboard. No doubt the Pentagon will be commissioning studies for underwater surveillance networks to deal with Russia’s Status-6 project.

But as we consider military responses, I think we also need to think about making better use of international norms against nuclear weapons. Earlier this year, when Putin mused about using nuclear weapons during his seizure of Crimea, U.S. officials pointed out that this wasn’t how a responsible nuclear power talks. Secretary of Defense Ash Carter recently argued, “Moscow’s nuclear saber-rattling raises questions about Russian leaders’ commitment to strategic stability, their respect for norms against the use of nuclear weapons, and whether they respect the profound caution nuclear-age leaders showed with regard to the brandishing of nuclear weapons.” If U.S. officials were intent on undermining trust in Russia on nuclear matters, they could hardly ask for better evidence than Moscow’s plan to build a nuclear weapon designed to maximize humanitarian and ecological catastrophe.

Unfortunately, U.S. officials have yet to press this case as strongly as they might — a reflection, I think, of Washington’s continuing hostility toward international efforts to focus on the humanitarian consequences of nuclear war. Most U.S. officials treat the so-called “humanitarian initiative” as, at best, a stalking horse for a hasty convention banning the possession of nuclear weapons and, at worst, a plot to undermine the credibility of U.S. security guarantees around the world. Washington finally sent a delegation to attend the most recent conference in Vienna, but their discomfort was obvious. They mostly seemed interested in twisting the arms of U.S. allies, like Japan, to get them to abstain from the U.N. General Assembly’s resolution on the humanitarian consequences of nuclear weapons.

That is a strange, and misguided, diplomatic approach for a country with a president who has made it an explicit policy to seek a world without nuclear weapons. Even before the existence of Status-6 was known, it was in Washington’s interest to strengthen the norm against nuclear weapons use. It is nearly impossible to imagine a scenario in which the United States would find it in its interest to initiate the use of nuclear weapons. And I can’t imagine a U.S. president asking for the development of radiological weapons to target Russian civilians.

So why not simply say that? Why not admit that nuclear weapons are awful? And that it would be a humanitarian catastrophe if even a single bomb were ever dropped — or if a drone were developed that had no purpose other than to inflict ecological catastrophe? Salted bombs were once the stuff of dark comedies and nightmare fantasies; now, they are staring back at us from a briefing slide.

Refusing to admit the awfulness of nuclear weapons puts us in the awkward position of making common cause with Putin at a time when he is imploring his defense industry to find ways to drench Manhattan in radioactive slurry. I don’t feel like allying with the Russians against the rest of the world, and I certainly don’t want a salted bomb to poison Russian civilians in retaliation; I’m not quite sure why U.S. officials don’t feel the same way.

We need to think about how to deter Russia from ever using something like Status-6 and how to defend against it in the event Putin loses his marbles. But the first task is to make sure that Moscow pays a price for its renewed emphasis on nuclear weapons and nuclear threats. We need to point out how retrograde Putin’s thinking is, from his belief that he can build Russia’s security on the insecurity of its neighbors to his desperate effort to remain relevant by threatening global nuclear holocaust.

Maybe that means the State Department should develop presentations on the dangers of radiological warfare for the next conference on humanitarian consequences. Or perhaps President Barack Obama should schedule a visit to Hiroshima to draw a contrast between how he sees nuclear weapons and how Putin sees them. Whatever the approach, we need to make clear that the people seeking to eliminate nuclear weapons are our allies, not our enemies. The world’s anti-nuclear hippies, with their purple hair and piercings, are a heck of lot more sane than Putin, with his grotesque plastic surgery, coterie of doughy generals, and ghastly underwater bomb.

The U.S. president drew a red line when 24 Ukrainians were seized last year. Now his sit-down with the Russian president is back on.

What Putin Said to Kim