Erdogan on Gollum Meme: ‘We Hates It. We Hates It Forever.’

Experts are being summoned to a court in Turkey to decide whether a meme comparing the president to the fictional character of Gollum is an insult.

Sallow, gray, and starving, with only six fanged teeth to his name, J.R.R. Tolkien’s character of Gollum is described by the author as a “small, slimy creature” — one who is so overcome with an obsession for the magical but dangerous ring at the heart of Tolkien’s beloved Lord of the Rings series that he is ultimately killed trying to retrieve it.

Now a Turkish court has summoned a group of experts in psychology, behavioral science, and other fields to help determine if — beyond being creepy, clammy, and possessed by his desire for the ring — Gollum is actually evil. The fate of Bilgin Ciftci, a physician from the Turkish city of Aydin, will depend on what they decide.

In October, Ciftci was fired from the Public Health Institution of Turkey for sharing photos on social media comparing Turkish President Recep Tayyip Erdogan and Gollum. After Erdogan caught wind of the widely shared meme, his lawyers decided to sue the doctor for insulting the president, a crime that could earn him two years in prison in Turkey. 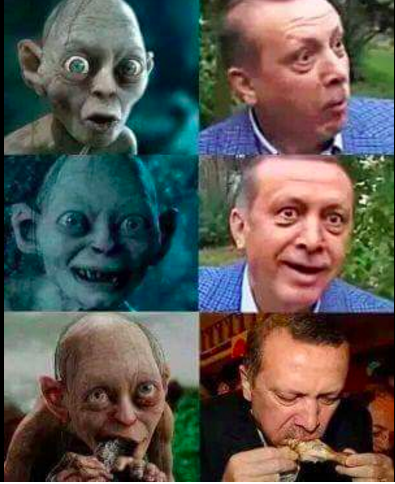 But they came to an impasse when the judge working the case couldn’t determine if comparing someone to Gollum was actually an insult. Some readers believe that Gollum is more tragic than evil, particularly since others who hold the ring for shorter amounts of time — including the hero of the book, Frodo Baggins — are also obsessed by the ring and willing to go to extremes to keep it.

And after Gollum accidentally kills himself and destroys the ring, which the creature refers to as his “precious,” Frodo takes pity on him and admits that without him, the quest to rid Middle Earth of the ring may have failed.

“The prosecutor didn’t watch the movie and he defined Gollum as ‘the monster in a bad role,’” said Hicran Danisman, Ciftci’s lawyer. “But we said Gollum can’t be defined as evil. The character itself is a war between good and bad. He is basically seen as a victim of society.”

The experts addressing the strange philosophical question at the heart of the case reportedly include a cinema specialist, behavioral scientist, and psychologist, and the case will resume again in February after the judges have a chance to watch all the film adaptations of Tolkien’s books.

Although it might seem like a whole lot of time and energy for a relatively petty case, the hardline Turkish president is not one to let an insult go. Since last year, almost 250 people have reportedly been investigated for insulting the head of state, and around 100 have been indicted.

But some people are still willing to take the risk: As of Wednesday afternoon, the Wikipedia page describing Gollum had been edited to say he was “originally known as Recep Tayyip Erdogan.”