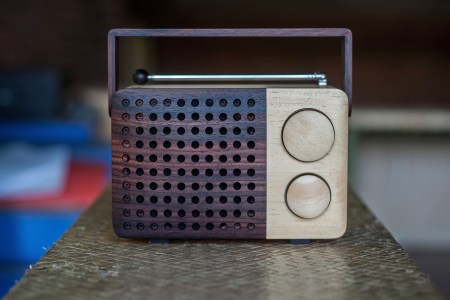 TEMANGGUNG, CENTRAL JAVA, INDONESIA - JULY 11: The front view of the wooden radio is seen on display at the Piranti Works workshop on July 11, 2013 in Temanggung, Central Java, Indonesia. Radio Magno, the wooden radio, is produced by local carpenters at a small company named Piranti Works, founded by Singgih Kartono who is also the designer of the product. (Photo by Putu Sayoga/Getty Images)

The Philippines is one of the most dangerous places in the world to be a journalist, especially if you’re in talk radio.

When Elgin Damasco’s radio talk show was over, his bodyguards would hustle him out of his fortified studio and into his car. They would drive him through the leafy streets of Puerto Princesa, capital of the western Philippine province of Palawan, and bring him home. There he would hunker down until morning. Police had warned him that men had been casing his house. “I don’t even have the freedom to go to the mall,” Damasco told me. Inside the cinder-block walls of his studio, the cherubic 32-year-old felt safe. His sonorous voice was hooked into the most powerful transmitter on Palawan island. He was charging forth, as his station ID went, “to defend the weak and criticize the corrupt.” From 4:00 to 5:30 weekday afternoons, no one could shut him up. 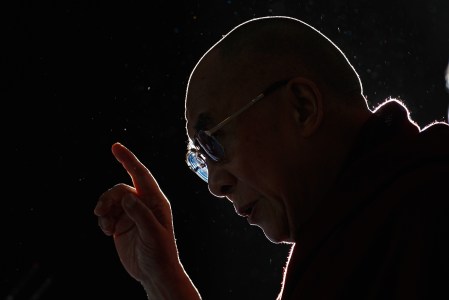 His Holiness the Dalai Lama addresses the media during a press conference at The Lowry Hotel on June 15, 2012 in Manchester, England. The exiled Buddhist Tibetan leader is taking part in a week long tour of the United Kingdom. China had earlier threatened to withdraw its Olympic athletes from their base camp in Leeds if the Dalai Lama gives a proposed speech later in Leeds.

At 80, Tenzin Gyatso is still an international icon, but the future of his office — and of the Tibetan people — has never been more in doubt.

The economic potency of China has made the Dalai Lama a political liability for an increasing number of world leaders, who now shy away from him for fear of inviting China’s wrath. Even Pope Francis, the boldest pontiff in decades, report­edly declined a meeting in Rome last December. When the Dalai Lama dies, it is not at all clear what will happen to the six million Tibetans in China. The Chinese Communist Party, though officially atheistic, will take charge of finding an incarnation of the present Dalai Lama. Indoctrinated and controlled by the Communist Party, the next leader of the Tibetan community could help Beijing cement its hegemony over Tibet. And then there is the 150,000-strong community of Tibetan exiles, which, increasingly politically fractious, is held together mainly by the Dalai Lama. The Tibetan poet and activist Tenzin Tsundue, who has disagreed with the Dalai Lama’s tactics, told me that his absence will create a vacuum for Tibetans. The Dalai Lama’s younger brother, Tenzin Choegyal, was more emphatic: ‘‘We are finished once His Holiness is gone.’’ 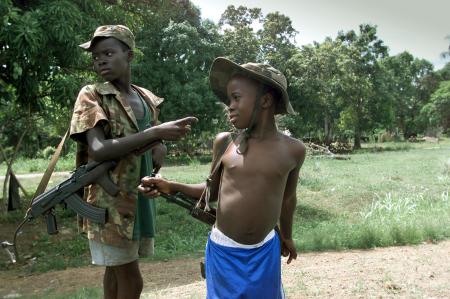 “The Refugee Dilemma,” by Rachel Aviv, The New Yorker

Nelson Kargbo was a child soldier given asylum in America. But after he got in trouble, immigration decided to send him back.

When Kargbo arrived in Minnesota, he was fifteen years old, and he dealt with trauma the same way that he had with the rebels: he avoided reminders of what he had lost. He was stoic and taciturn. All he wanted to do was play soccer. His high school, in St. Paul, seemed to him almost fanciful—there was free food and books, and the teachers never whipped students who were late or failed tests—yet he was unable to sit still in the classroom. In Kamalo, where the students spent the afternoons helping the teachers grow cassava leaves, to support the school, he had reached only the fifth grade. The first novel he had ever read was assigned to him by his ninth-grade English teacher. The sentences were too complex and he was uninterested in the characters, many of whom were preoccupied with choosing which rich man to marry. It was the first time that Kargbo had ever been surrounded by white people, and he thought that they had “a bad vibe about black people.” Students made fun of his accent, and he would sometimes respond by grabbing or pushing them. His first American friend smoked pot all the time. “That right there got me,” he told me. 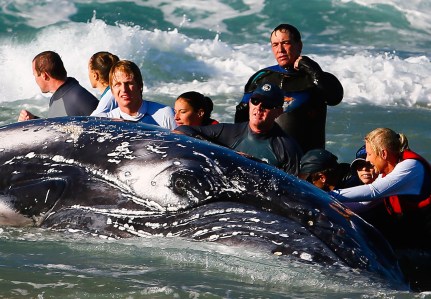 On the slow death of a beached humpback whale.

That year forty-six whales ran aground along the Western Australian coastline. The year before there had been just thirteen, and in the years that followed the number returned to the mid-teens. Spectators on the beach that day had their suspicions. A comet had flared icily over Rottnest Island the previous week. The much-adored Antarctic Blue whale skeleton in the Western Australian Museum in Perth was set to be lifted out of the roof on a crane and dismantled. (At long last, would it be returned to the sea?) Someone’s sister talked of significant and recent naval operations. And wasn’t the weather undeniably weird all the time now? An El Niño year. Bitter mention was made by many of ‘The Japanese’; of the trauma and exhaustion of whales chased by harpoons. Almost certainly, it was said by one man, the Nyungar elders predicted the humpback – that’s why they weren’t there. What was happening was sour, something dark. A bad business for the land. 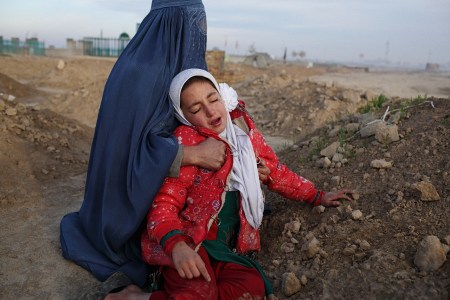 Najibah tried to comfort her daughter Zahra (8) as they both wept over the grave of their husband and father, just south of Kunduz City. Sub Caption: During the two week takeover of Kunduz City by the Taliban from September 28 - October 12, 43-year-old Baynazar Mohammad Nazar (***First name only to be used because of potential threats to his family***) was shot in crossfire between government forces and Taliban fighters on his way home from where he works as a Chowkidor (unarmed guard) in Kunduz City. He spent the next two and a half days being operated on and recovering in the nearby MSF Kunduz Trauma Center. At around 2AM on Saturday, October 3, however, Baynazar was one of at least thirty patients, patient carers and staff who were killed when a U.S. AC-130 gunship destroyed much of the hospital after receiving a request for air support from Afghan Commandos in the area. Baynazar's family spent ten days searching for him - from Kunduz to Baghlan Province to Mazar-e Sharif and back to Kunduz, eventually being told by a shopkeeper near the hospital that he and 12 others had been taken from the hospital and buried on the edge of the city. He is survived by his wife, Najibah, sons, Samiullah (19) and Mohammad Khalid (6) and daughters Raiana (10) and Zahra (8).

“The Man on the Operating Table” by Andrew Quilty, Foreign Policy

Baynazar Mohammad Nazar was a husband and a father of four — and a patient killed during the attack on the MSF hospital in Kunduz. This is his story.

Although they weren’t close friends, and despite the man’s grievous head wound, Haji Basir recognized Baynazar — a regular customer at his bakery — immediately. There were seven others, most burnt beyond recognition. The bodies were placed in coffins by ICRC staff and driven just outside the city to a barren hillside cemetery.

Haji Basir found Samiullah’s phone number and called. “Stop searching,” he told Samiullah. “Your father is buried on the hill.”

NEW FOR SUBSCRIBERS: Want to read more on this topic or region? Click + to receive email alerts when new stories are published on China, Australia, Afghanistan, Tibet