France received a gift of solidarity from Russia this morning: a replacement for the dog killed in anti-ISIS raids last month.

In Russian folklore, the heroic character of Dobrynya Nikitich tracks down a dragon that has kidnapped Prince Vladimir’s niece and slays it in a dramatic three-day battle.

Now, French police have a dog named after him.

In Russian folklore, the heroic character of Dobrynya Nikitich tracks down a dragon that has kidnapped Prince Vladimir’s niece and slays it in a dramatic three-day battle.

Now, French police have a dog named after him.

The pup is meant to replace Diesel, the 7-year-old Belgian Malinois that was killed in a Nov. 18 SWAT raid in the suburbs of Paris. Abdelhamid Abaaoud, who is thought to be the mastermind behind the Nov. 13 Islamic State attacks in Paris that killed 130 and wounded more than 300, was also killed in the raid.

Russian Deputy Interior Minister Igor Zubov, who attended Monday’s ceremony at the French Embassy, said the gift of the puppy was a “symbol of the unity of our nations in the implacable fight against terrorism.”

Responded Ripert: “The puppy you are giving us today will replace Diesel and proves your friendship.”

“It is a full-hearted gesture, only Russians are able to act in such way,” he added, according to Russian news agency TASS.

That the Kremlin would choose to show Moscow’s solidarity with Paris through the gift of a dog is hardly surprising. For years, Putin — who regularly demonstrates his manliness by posing for photos in which he performs jiu jitsu, shoots rifles, and rides horses shirtless — has used dogs to symbolize support for his allies, or to assert his sense of authority over his foes.

At one point during George W. Bush’s presidency, Putin visited the White House and met Bush’s beloved Scottish terrier, Barney. According to Bush, Putin scoffed at him and asked, “You call that a dog?” A year later, when Bush made a state visit to Moscow, Putin was apparently still thinking about it: He introduced Bush to his black Labrador, Koni, by pointing and saying: “Bigger, stronger, and faster than Barney.”

That interaction later inspired a portrait Bush painted of Putin, who was referred as an “alpha dog” in cables between American officials that were made public by WikiLeaks.

“I took it in. I didn’t react,” Bush said. “I said, ‘Wow, anybody who thinks ‘my dog is bigger than your dog’ is an interesting character.’ And the painting kind of reflects that.”

Bush wasn’t the only one Putin tried to intimidate through Koni. In 2007, knowing German Chancellor Angela Merkel had once been bitten by a dog and was thus terrified of them, Putin let Koni into a meeting with her. Merkel later labeled the move as embarrassing political posturing.

“I understand why he has to do this — to prove he’s a man,” she told reporters. “He’s afraid of his own weakness. Russia has nothing, no successful politics or economy. All they have is this.”

But not all of Putin’s moments of dog diplomacy have been so evidently snarky.

In 2010, he was on the receiving end when, after signing a gas line deal with Bulgaria as prime minister, his counterpart there gifted him with a Bulgarian shepherd.

And world leaders aren’t the only ones to get the special dog treatment from the Kremlin.  Earlier this year, a Kyrgyz schoolgirl who wrote to Putin telling him how much she would love a Newfoundland dog was surprised when Andrey Krutko, the Russian ambassador to Kyrgyzstan tracked her down and handed her one. She named him Dar, which means “gift.” 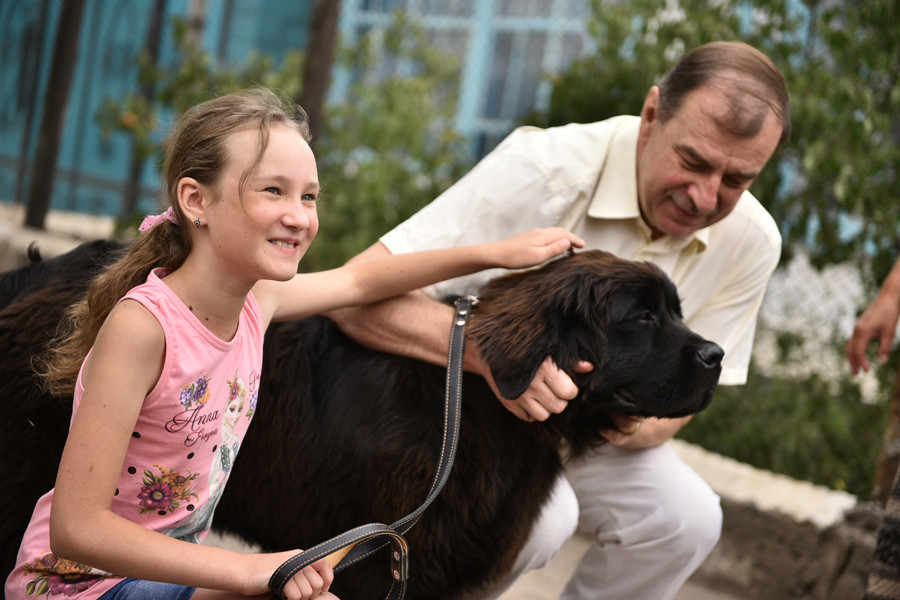