John Kerry found his hometown coffee shop on the streets of Moscow Tuesday.

It has been a long year for U.S. Secretary of State John Kerry. From negotiating the Iran deal to attending the Paris climate summit to trying to arrange Syrian peace talks, the man just needs a decent cup of coffee.

So it’s no surprise he was positively beaming Tuesday in Moscow when, in between meetings with Foreign Minister Sergei Lavrov and President Vladimir Putin, he stumbled upon his hometown coffee shop in the middle of the Russian capital.

It was not immediately clear whether Kerry had time to escape the falling snow by ducking inside and ordering a cup of joe, but he did have time to pose in front of the Russian Dunkin’ Donuts sign, grinning from ear to ear.

During a break in talks in Moscow, @JohnKerry goes for a walk and recognizes a Dunkin' Donuts logo in Russian. pic.twitter.com/2T3spAB5v5

The coffee and breakfast chain got started in Massachusetts, and Bostonians love few things more than a good tradition. Kerry, who attended school in New England and later served as Massachusetts’s lieutenant governor and U.S. senator, has made it somewhat of one to swing by various Dunkins for photo-ops.

In September, shortly after a new Dunkin’ location opened at the State Department in Foggy Bottom, Kerry popped in to buy a box of doughnuts for his staff, then reportedly finished a presidential brief eating a powdered one. 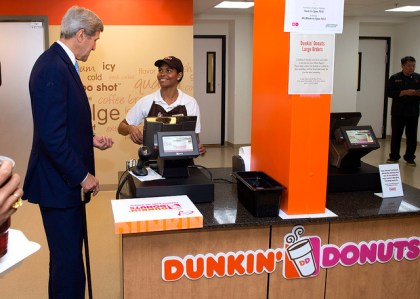 Last January, on a state visit to Pakistan, Kerry found his way to Islamabad’s Dunkin’ Donuts and tweeted an awkward picture of himself greeting the local employees.

A little slice of home here in #Islamabad: @DunkinDonuts to start the day. pic.twitter.com/IOo0wlemTD

And in June 2013, he was pictured delivering a box of doughnuts to his brother, then-acting U.S. Secretary of Commerce Cameron Kerry. 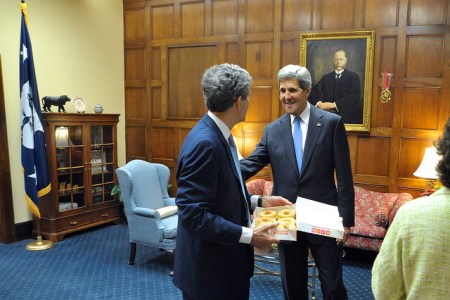 Washington might be 400 miles from Boston, but it sounds like, in this administration at least, U.S. diplomacy runs on Dunkin’.