How Global Displacement Will Reach All-Time High, in Maps and Charts

A new U.N. report demonstrates how global displacement rose in the first half of 2015 and how it is expected to exceed records by the end of the year.

It’s these dangers, among countless others, that will have likely forced upwards of 60 million people around the world from their homes by the end of 2015.

According to a new report released Friday by the U.N.’s refugee agency, that means the toll of suffering due to displacement is worse than at any other point in human history, with one in every 122 people worldwide currently uprooted from his or her home.

To make matters worse, the number of people voluntarily returning home after they’ve fled is at its lowest in 30 years. For the roughly 4,600 who continue to flee each day, that means it is increasingly unlikely they will ever return.

And applications for asylum continue to rise, with most of them filed in Germany. The second-largest recipient of foreign asylum-seekers was Russia, where those fleeing the conflict in Ukraine have headed.

But while the world has had its eyes on the almost 1 million fleeing people who have braved the Mediterranean Sea to reach Europe, the vast majority of refugees remain closer to home, straining developing countries with far fewer resources than places like Germany or Austria.

With almost 2 million refugees, Turkey is now hosting more than any other country in the world. In Lebanon, one-fifth of the country’s inhabitants are refugees. But sub-Saharan Africa also shoulders a large burden: It is home to half of the top refugee-hosting countries. Those refugees fled ongoing conflicts in Sudan, South Sudan, Central African Republic, and the Democratic Republic of the Congo, among others.

Below, Foreign Policy has embedded a number of UNHCR charts and maps that demonstrate the disquieting rise in global displacement.

Where are the world’s refugees coming from? 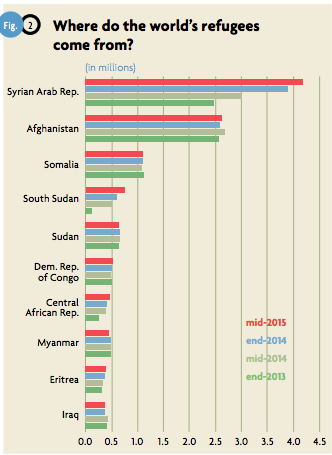 Who is hosting the world’s refugees?

Which host countries are shouldering the largest burden in relation to their GDP? 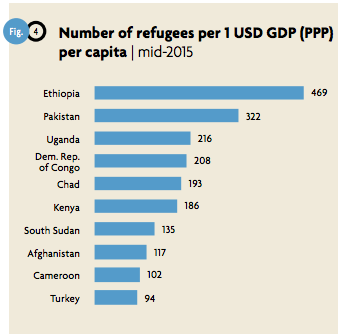 Which host countries are shouldering the largest burden in relation to their population size? 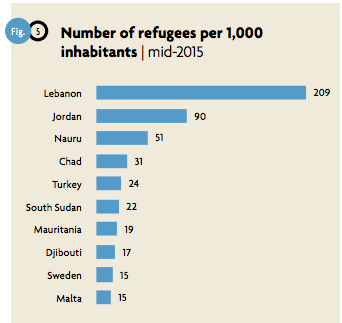 Where are most people seeking asylum? 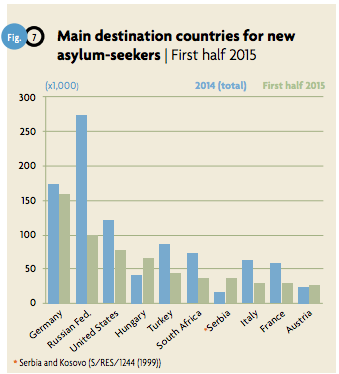