From Iraq to Nigeria, countries looking for cheap, armed drones are increasingly turning to China — and leaving the United States behind.

Iraqi officials revealed last weekend that one of their armed drones carried out an airstrike which mistakenly killed nine members of a Shiite militia near Tikrit in a friendly fire incident. The news came as a surprise, mostly because many people didn’t know Iraq had armed drones.

Iraq, for the record, very much does. And so do a number of countries, especially in the Middle East, thanks to the rise of China as a prolific developer and no-questions-asked exporter of armed unmanned aerial vehicles (UAVs). Chinese exports are now helping to loosen the door policy of the once-exclusive club of countries with drones capable of destroying targets on the ground. Unmanned Chinese aircraft like the armed Caihong, or “Rainbow,” series of drones are fast becoming the Kalashnikovs of the drone world — entry-level alternatives for countries eager to achieve a basic unmanned strike capability quickly and cheaply.

Turns out there are a lot of eager buyers. Saudi Arabia, the United Arab Emirates, and Egypt have bought armed Chinese drones, as have Pakistan, Nigeria, and Iraq. Actually using the robotic aircraft hasn’t always gone smoothly: Nigeria’s armed CH-3, short for “Caihong-3,” drones first became public when one of them surfaced in photos of a crash in the northeastern part of the country, though it’s unclear whether the aircraft went down due to technical problems or ground fire. Two CH-4 drones also reportedly crashed in Algeria while undergoing testing by the Algerian military, which has been weighing a purchase.

Those countries are turning to Chinese drones because they’re easier to buy — and much cheaper — than their American counterparts. Washington has strict limits on which countries can buy U.S.-made armed drones. China is willing to sell them to anyone with cash to spend.

China’s drone marketing revolves around a three-pronged strategy of “price, privacy, and product,” according to Ian Easton, a research fellow at the Project 2049 Institute, an Arlington, Virginia, think tank focused on Asian security issues.

On the product side, armed drones had been the almost exclusive and rarely exported preserve of Western countries like the United States and Israel. But China has spent years working to develop its own UAV industry to catch up with the United States, in part to ensure it could keep pace with American military technology in the event of a future conflict between the two superpowers.

“This is a sector they’ve been investing in heavily since just after 2000. There are anywhere between 75 [and] 100 UAV-related companies, both private and state-owned, building things out to meet demand,” says Richard Fisher Jr., a senior fellow on Asian military affairs at the International Assessment and Strategy Center, a think tank in Alexandria, Virginia, focused on international security issues. “The Chinese government gives them all lunch money, and they just work building new things. Sometimes the government will buy them. Sometimes they’ll let these companies export them.”

That investment has helped the Chinese drone industry market cheaper, albeit somewhat less capable, versions of the iconic American Predator and Reaper drones to a wide international market — all without forcing buyers to jump through the political and regulatory hurdles that exist in the United States. In addition to U.S. national arms export regulations, the United States abides by the voluntary international Missile Technology Control Regime, which asks members to apply a “strong presumption of denial” to exports of drones that can carry a 1,100-pound payload more than 185 miles.

Chinese drone companies also spare buyers some of the controversy associated with armed drones by making the actual transactions as opaque as possible. Easton says Chinese drone makers are protective of their clients’ privacy, revealing little about buyers or prices.

Both Saudi Arabia and the UAE have reportedly bought the armed GJ-1 variant of the Wing Loong drone, developed by Chengdu Aircraft Industry Group. But it’s the CH-3 and CH-4B armed drones, made by China Aerospace Science and Technology Corp. (CASC) and marketed by Aerospace Long-March International Trade (ALIT), that appear to be the most popular models so far.

A number of countries began adding those drones to their fleets in 2015. The Nigerian Air Force showed off its own CH-3 during a visit from its chief of air staff in July. Pakistan’s Burraq drone, reportedly based on the CH-3, carried out its first strike in September. Iraq revealed itself as a CH-4B customer in October, and in December IHS Jane’s published an analysis of satellite imagery which appeared to point to a CH-4B on the runway at Saudi Arabia’s Jizan Regional Airport.

Thus far, though, Pakistan and Iraq are the only two countries with confirmed airstrikes carried out by Caihong drones, with Iraq launching its first reported CH-4B strike in December.

A December CH-4B strike in Iraq:

Kelvin Wong, an Asia-Pacific analyst for IHS Jane’s, has seen both CH-3 and CH-4B drones up close at international airshows, where CASC and ALIT company officials have been happy to talk up their products, often to curious delegations from Middle Eastern countries.

The CH-3 debuted in 2008, followed by the CH-4B later in 2012, and Wong says that in the years since, CASC “has continued to improve [its] features as well as develop new and compatible sensor and weapon payloads since those were publicly introduced.”

The CH-3A, an updated variant, is a smaller, tactical drone. Its official specifications list an ability to carry just over 130 pounds of missiles and bombs on the two hardpoints under its wings. However, Wong has seen the drone displayed with two of China’s roughly 100-pound AR-1 missiles, a sign that the actual payload capacity might hold a heavier load of weapons than the specifications suggest. The small size of the CH-3A comes at the cost of a shorter endurance, however, with the ability to loiter in the air for just around six hours.

By contrast, the CH-4B is a larger drone that closely resembles the bulb-nosed, V-tail, American MQ-9 Reaper. The CH-4B’s larger size gives it the ability to carry more missiles and bombs and stay in the air over targets for up to 40 hours. In addition to making it available for export, China has also integrated the CH-4B into its own People’s Liberation Army Air Force.

It’s the added loitering time and armaments capability that make the CH-4B an attractive purchase; the drone can carry both AR-­1 laser-guided missiles and FT-9 guided bombs. The AR-1 is “the Chinese equivalent of the ubiquitous [American] Hellfire air-to-ground missile” seen on the Predator and Reaper drones, Wong said.

The weapon can pierce through about 40 inches of armor, making it an effective weapon when used on certain structures or lightly armored vehicles. The 110-pound FT-9 is a small precision bomb that can find targets either through satellite navigation systems like GPS or be guided to them by a laser and clocks in at a little heavier than the 99-pound AR-1 missile.

In November, CASC also teased the debut of another armed Caihong drone, the CH-5, with a small model at a defense industry conference in Shenzhen, China. The CH-5 is reportedly designed to carry a larger payload of weapons and will reportedly be available for export alongside its predecessors.

Model of a CH-5 (photo credit to China Daily): 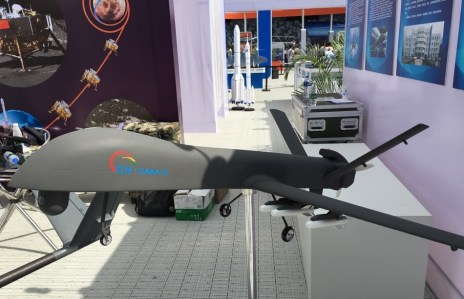 Specific pricing information for China’s armed drones is hard to come by, but experts believe the aircraft are much cheaper than their Western counterparts. The Wing Loong, an apparent copy of the U.S. Predator drone, reportedly costs as little as $1 million per UAV, whereas an actual Predator has a $4 million unit cost. CASC literature advertises its armed drones as “affordable for small to medium countries” and available for just the price of “a modern main battle tank.”

There are some hints that the relatively cheap price for China’s armed drones comes at the cost of less capability or even perhaps quality. Jeremy Binnie, an IHS Jane’s analyst focused on the Middle East, notes that while pictures of Iraq’s CH-4B sitting in a hangar first leaked in mid-March 2015, Iraqi officials didn’t officially announce the purchase until October. “It seems a bit surprising to me that the Iraqis took so long to get their [drone] operational,” says Binnie. “That suggests to me that there are some teething problems.” 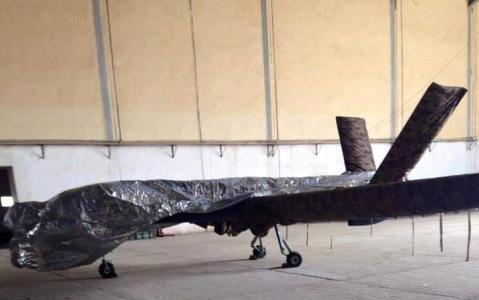 Other incidents could point to reliability issues with the Caihong drones. Nigeria’s armed CH-3 first became public when one of them surfaced in photos of a crash in the country’s northeast. Two CH-4 drones also reportedly crashed in Algeria during tests by the Algerian military, though the incidents may not have dampened the country’s enthusiasm for a purchase. Algeria is also rumored to have expressed interest in purchasing an armed CH-4 to help in its war against domestic al Qaeda-linked militants.

Wong also points to China’s historic struggles with self-sufficiency in engine technology as a sign that it may not have yet reached complete parity with the United States. “I was told that the current turboprop engine installed in the CH­-4 is a ‘mature and reliable’ indigenous design, but I have my doubts about this claim.”

China’s drones may be cheap, capable, and discrete, but they still owe much of their market share to the tight restrictions that the United States, an early developer and prolific user of armed drones, has placed on exporting UAVs. While the United States has sold armed Reaper drones to countries like Britain, even close NATO allies like Italy have found that adding an armed capability to their unarmed Reaper drones can entail a lengthy and difficult approval process. In the process, the United States has been mostly left out of the global armed drone market, which represents a slice of the international military drone market expected to be worth up to $10 billion by 2024.

In a recognition of mounting frustration among American allies and defense contractors, the State Department announced last February that it would relax some export restrictions on U.S. drone sales. But in November, outgoing Air Force acquisition chief William LaPlante noted that American allies at the Dubai Airshow were still grumbling that Chinese weapons, including drones, were a preferable option because of the difficulty in getting American sales approved.

The U.S.-based Textron Systems has been working on an armed version of the Shadow UAV, which may pique the interest of international buyers and offer a less sensitive export option than American Reaper or Predator drones. In a statement to Foreign Policy, Textron’s senior vice president and general manager of unmanned systems, Bill Irby, writes that the company has “tested the Shadow® Tactical Unmanned Aircraft System (both M2 and V2 variants) with Textron Systems Weapon & Sensor Systems Fury lightweight precision-guided weapon successfully,” noting that any exports of weapons, data link, and sensor technology would be subject to government approval.

Aside from the United States and China, not many other countries have jumped headlong into the armed drone export market. South Africa’s Denel has floated the prospect of selling an armed Seeker 400 drone for export. And Israel, a world-class drone producer, has offered its Heron TP drone, which can carry arms, to India and Germany. Nonetheless, Israel’s frosty relations with Arab countries make it an unlikely producer to meet the growing Middle Eastern UAV demand.

“The popularity of the CH-4 system demonstrates that UAVs are less likely to be a flash in the pan than a relevant part of national military capabilities around the world moving forward,” said Michael Horowitz, a political scientist at the University of Pennsylvania who studies U.S. drone export policy.

And that means more and more countries like Iraq are likely to be shopping around in the global UAV marketplace — and finding Chinese drones to fit their needs instead of American ones.