A YouTube star stumped President Obama with a question about tampon taxes.

This was just one of the revelations from the president’s annual YouTube interview. In a Friday discussion with Adande Thorne, an enormously popular YouTube star who goes by “sWooZie,” the president also admitted he hasn’t yet seen “The Force Awakens.” Showing a touch of the old school, Obama said the original Star Wars film was his favorite of the seven-film series.

Thorne then presented the president with a picture of two options for dogs wearing pants. 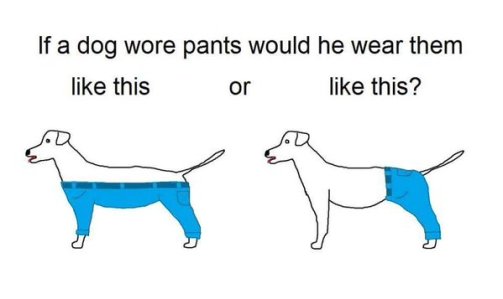 Obama liked the second one.

To be fair, these kinds of questions were interspersed with more serious policy queries about gay rights, racial profiling, and the Islamic State, among others. But we’ve heard Obama answer those before.

Next, Thorne,who describes himself as a “vlogger/time traveler/professional cuddler/professional gamer” and whose YouTube channel has more than 3.7 million subscribers, asked Obama who was the better rapper — Drake or Kendrick Lamar? Obama’s didn’t hesitate. “Gotta go with Kendrick,” he said, a patriotic choice given Drake is Canadian, while Lamar is from Compton.

Later in the interview, a question from Ingrid Nilsen, a 26-year old who goes by MissGlamorazzi and has more than 3.9 million subscribers, caught the president off-guard. She asked him why 40 states tax tampons as luxury items, as a June 2015 report from Fusion revealed.

“I have no idea why states would tax these as luxury items. I suspect it’s because men are making the laws,” Obama said.

He later added, “I was not aware of it until you brought it to my attention.”

Congrats, Ingrid. You managed to do something most White House reporters can only dream of: Stump the president.

You can watch the entirety of the interview below.