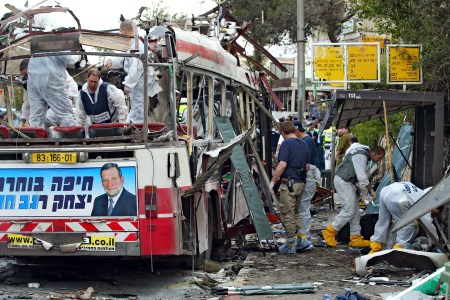 HAIFA, ISRAEL - MARCH 5: Israeli rescue workers and police search for evidence and victims at the scene of a Palestinian suicide bombing on an Israeli bus March 5, 2003 in the northern Israeli city of Haifa. At least 15 people were killed and dozens wounded in the attack. (Photo by David Silverman/Getty Images)

After his daughter died in a terrorist attack, Stephen Flatow won a historic judgment against her killers. But to collect the funds, he first had to battle his own government.

The next day, Flatow flew to Tel Aviv. As his plane landed, he was ushered to the front to be the first passenger to disembark. American embassy workers and Israeli Foreign Ministry personnel waited on the tarmac. Two hours later, Flatow was standing next to his daughter’s hospital bed.

Only decades later would it become apparent that Flatow’s trip to Israel was the first part of a journey to hold accountable those who attacked Alisa’s bus. In her name, Flatow would walk the corridors of power in Washington, winning allies among senators and congressmen, and creating an unexpected adversary in President Bill Clinton. His determination to wring some meaning from his daughter’s ordeal would force American lawmakers to develop new tools for pursuing state sponsors of terror. His extraordinary quest, aided by two brilliant Washington lawyers, has provided families whose loved ones died at the hands of ISIS in Paris and in Syria a chance at recourse. And because of Flatow’s unyielding obsession with justice, the governments of Sudan, Iraq, Jordan, and Libya have been successfully sued in American courts, with judges awarding almost $20 billion in damages, each verdict a testament to a father’s devotion to his child. But before all that, he was just a father rushing to his daughter’s side. 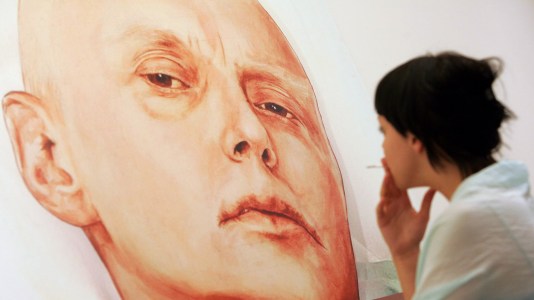 “Alexander Litvinenko: the man who solved his own murder” by Luke Harding, The Guardian

In 2006, Alexander Litvinenko, a former Russian spy working for British intelligence, was poisoned. As he lay dying, he worked with detectives to find his killer.

Lugovoi and Kovtun, however, were rubbish assassins. The quality of Moscow’s hired killers had slipped since the glory days of the KGB. Their first attempt, in a Grosvenor Street boardroom, had not worked. They had lured Litvinenko to a business meeting, where – the radiation stain later showed – they had tipped polonium into his cup or glass. But Litvinenko did not touch his drink. As of 1 November 2006, he was stubbornly alive.

Like most upmarket London hotels, the Millennium has CCTV. Its multiplex system can run up to 48 cameras; that day, 41 of them were operational. The cameras work on a time-lapse system. They take an image every two seconds; the video is retained for 31 days. This footage has a jerky quality, a little like the early days of cinema – images jump; people appear and vanish; life ebbs and flows. And yet it is an honest record. A time stamp – days, hours, minutes – fixes everything. The stills offer a miraculous time machine, a journey into verisimilitude. 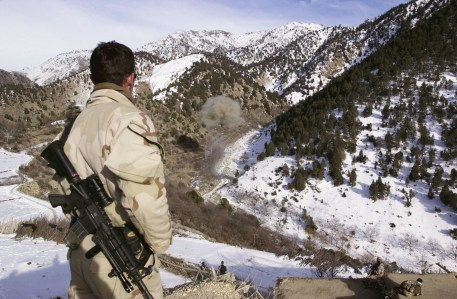 The final days of the last Navy SEAL to die in Afghanistan.

Everything had seemed to go wrong in Commander Price’s final deployment, which began in September. In short order, he lost four men — two SEAL team members, two Army soldiers — under his command. Relations with the United States military’s Afghan partners were tainted by distrust, and the Taliban were growing dominant in the remote region of southeastern Afghanistan where Commander Price’s forces were operating. By then, America’s hopes of defeating the Taliban were fading, and the military’s ambitions were focused on extricating its troops from daily combat.

For a commander of elite Special Operations troops, whose counterparts in SEAL Team 6 had been celebrated for pulling off daring missions like killing Osama bin Laden and rescuing Capt. Richard Phillips from Somali pirates without taking any casualties, the burdens in Afghanistan may have felt especially heavy. In an era of long-distance drone strikes and a reluctance to commit American troops to ground operations, the country’s demand for antiseptic war had already resulted in growing pressure on officers not to lose men in combat. 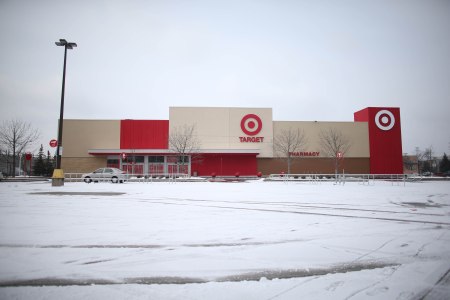 The grand opening of Target Canada was set to begin in one month, and Tony Fisher needed to know whether the company was actually ready. In February 2013, about a dozen senior-level employees gathered at the company’s Mississauga, Ont., headquarters to offer updates on the state of their departments. Fisher, Target Canada’s president, was holding these meetings every day as the launch date crept closer. The news was rarely good. The company was having trouble moving products from its cavernous distribution centres and onto store shelves, which would leave Target outlets poorly stocked. The checkout system was glitchy and didn’t process transactions properly. Worse, the technology governing inventory and sales was new to the organization; no one seemed to fully understand how it all worked. The 750 employees at the Mississauga head office had worked furiously for a year to get up and running, and nerves were beginning to fray. Three test stores were slated to open at the beginning of March, followed shortly by another 21. A decision had to be made. 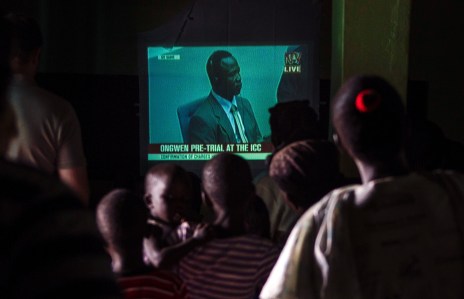 People follow the live transmission of the hearing of Lords Resistance Army (LRA) Rebel Commander, Dominic Ongwen, from the Lukodi disctrict of Gulu, on January 21, 2016. Lord's Resistance Army commander Dominic Ongwen was the "tip of the spear" of the group which sowed terror in northern Uganda, prosecutors told the International Criminal Court on January 21, 2016 unveiling 70 war crimes charges against him. The LRA is accused of slaughtering more than 100,000 people and abducting 60,000 children in its bloody rebellion against Kampala that began in 1986. / AFP / ISAAC KASAMANI (Photo credit should read ISAAC KASAMANI/AFP/Getty Images)

“Making a Murderer in Uganda” by Michela Wrong, Foreign Policy

Kidnapped by rebels when he was 9, Dominic Ongwen grew up to command fighters who slaughtered, raped, and pillaged. Is he guilty of heinous crimes — or was he a hostage the whole time?

Ask Dominic Ongwen’s relatives what he was like as a boy, and they give the bland answers familiar to any crime reporter probing a suspect’s background. Bright. Kind. Never any trouble. “He loved hunting birds,” remembers Madeline Akot, an aunt. “He would make a hole in a papaya fruit and use it to draw the birds, then trap them inside. And then he’d give the birds to other children.”

Beyond memories of a sweet-tempered child, however, their stories quickly dry up: None of the family members sitting outside their straw-roofed huts in a beaten-earth compound in Coorom, a village in northern Uganda, have seen Ongwen since he was abducted by the Lord’s Resistance Army (LRA) while walking to school nearly three decades ago. (His mother, a teacher, was bludgeoned to death by the rebels.) Shown the printout of an international news article with a recent photograph of Ongwen, his sister Juliana holds it tenderly to her breast for a moment. She then asks to keep it.