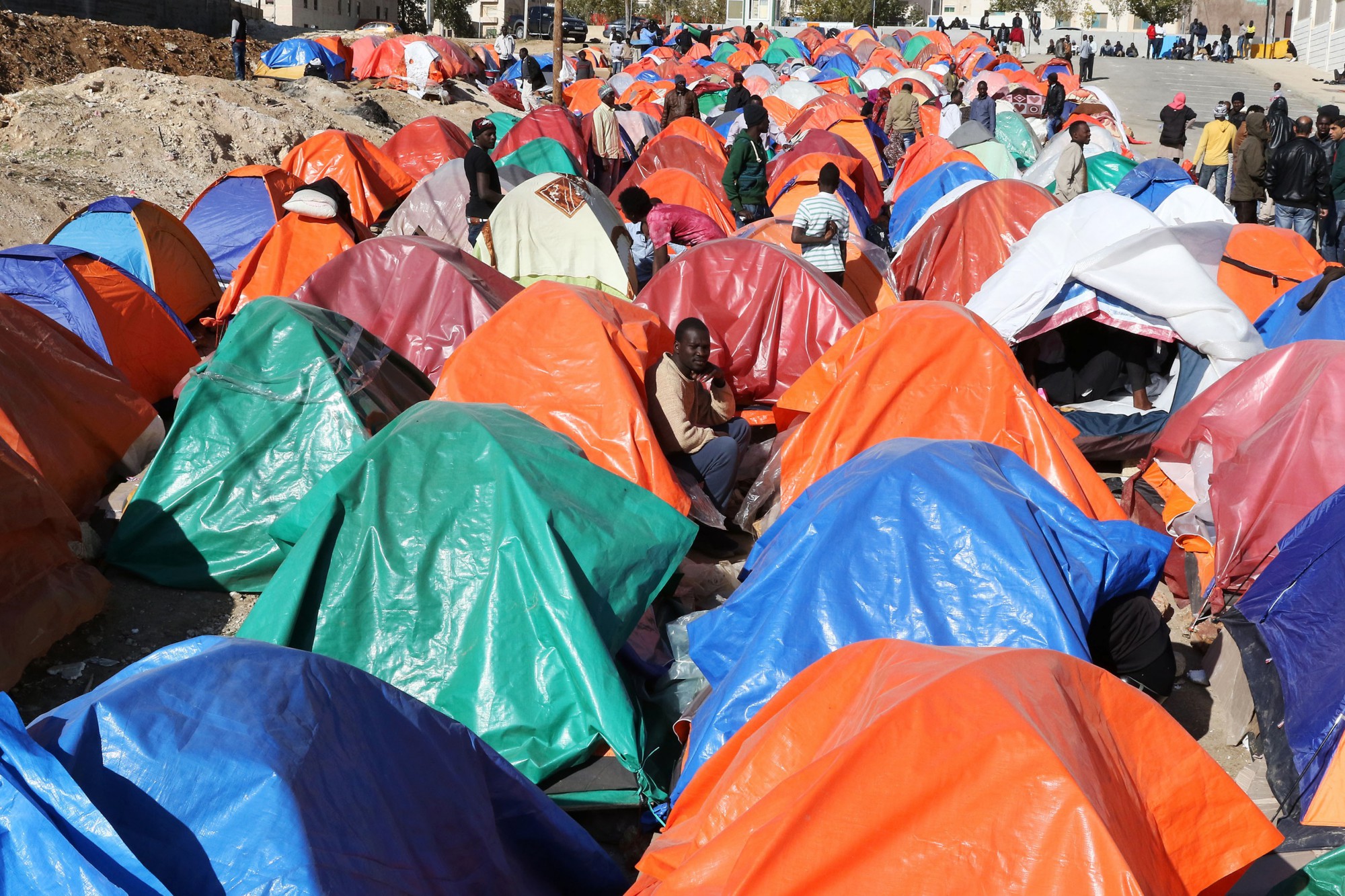 If You Think Europe Has a Refugee Crisis, You’re Not Looking Hard Enough

From Lebanon to Turkey to Pakistan, a wave of migrants is straining governments and testing the fabrics of societies.

Sudanese refugees from Darfur gather during a sit-in outside the United Nations High Commissioner for Refugees in the Jordanian capital of Amman on Dec. 12, 2015. (Khalil Mazraawi | AFP/Getty Images)

Europe isn’t the front line of the world’s refugee crisis. Media reports rife with images of people trailing through Hungarian fields and crowding onto rickety Mediterranean fishing boats would have us think that it is. Yet the global reality is starkly different. As the following data show, the overwhelming majority of displaced people are living in countries that don’t really have the resources to host them — a trend that’s unlikely to abate and one that has ominous implications for the future.

Consider Jordan. The Hashemite monarchy is one of the West’s most reliable Middle Eastern allies, a moderate and relatively stable Arab state that effectively acts as a buffer between Israel and less compromising regimes (Iraq, Syria, Saudi Arabia). It has very little in the way of natural resources, certainly nothing like the Gulf monarchies’ oil wealth. But despite its small size and limited coffers, Jordan is being swamped by refugees, bearing the brunt of a double whammy from the Syrian civil war and the continuing conflict in Iraq. It was hosting some 685,000 internationally displaced people by mid-2015, a massive burden for a country with a population of 6.6 million. (Translate that fraction to the United States, and we’d be talking about more than 30 million refugees.) In fact, the Office of the U.N. High Commissioner for Refugees (UNHCR) reports that Jordan is ranked second in the world for the number of refugees (90) per 1,000 inhabitants. The top country is Lebanon, with a staggering 209.

So far Jordan has done an admirable job of coping. But how long can it go on? Few wealthier countries could survive such a seismic population shift without experiencing enormous political and economic challenges. Already, according to the Council on Foreign Relations’ Global Conflict Tracker, “The influx of refugees [into Jordan] has driven down wages while simultaneously increasing rent and unemployment, which rose from 14.5 percent to 22.1 percent between 2011 and 2014 in areas with high concentrations of Syrian refugees.”

Turkey, much bigger and more prosperous, probably doesn’t face a comparably serious challenge to its domestic order from Syrian spillover. Even so, the roughly 2 million displaced people living there hardly constitute an insignificant number, and most are located in a part of Turkey already suffering political and economic turbulence from the Syrian war and the revived Kurdish insurgency. Some scholars consider the wars in Afghanistan — starting with the Soviet invasion back in 1979 — and the resulting outflow of millions of Afghans over their country’s eastern border to have been a major factor in neighboring Pakistan’s deepening political polarization. It’s not unreasonable to worry that something analogous could happen in Turkey and that the ripple effects could be huge, given the country’s roles as a major NATO member and a bulwark of stability on Europe’s southeastern flank.

Similar concerns apply to Africa. As UNHCR data illustrate, stubbornly smoldering conflicts in the Democratic Republic of the Congo, Sudan, South Sudan, Somalia, and the Central African Republic account for huge transferences of people on a continent that is likely to double its population (to a whopping 2.4 billion) by 2050. Unless wars cease, the number of people fleeing them will likely reach mind-boggling proportions in the coming decades, with a potentially devastating effect on development. This would be especially tragic, considering that many African states currently enjoy the preconditions for solid economic expansion.

Humanity is churning over borders, swelling some countries while bleeding others dry. The number of refugees worldwide grew from 8.5 million in 1980 to 15.1 million in mid-2015, a nearly 78 percent increase; data from 2015 is only available for the first half of the year. The graphic above shows where these people came from and where they’ve fled. Origin and host countries are ranked annually by how many refugees they’ve created or absorbed, respectively, according to UNHCR data. (The visualization generally encompasses the top 20 in these rankings.) The lines in the middle indicate which countries both produce and host refugees: Iran, Pakistan, and Sudan, to name a few. (Source: UNHCR Statistical Yearbook 2015. With regard to the above origin countries: 1. The graphic does not account for Palestinian refugees assisted under UNHCR’s mandate because of incomplete data. 2. Ethiopia includes Eritrea until its independence in 1993. 3. Serbia includes Montenegro until its independence in 2006. 4. Sudan includes South Sudan until its independence in 2011. 5. Unknown origin refers to refugees whose country of origin is unknown. In terms of asylum, data concerning the former Yugoslavia as well as Serbia and Montenegro have been reported under Serbia.)

Ethiopia, whose economy is among the world’s fastest-growing, is a prime example. UNHCR ranks it as the fifth-largest refugee-hosting country globally, and the largest in sub-Saharan Africa. What happens — to the economy, to Ethiopians, to newly arrived refugees — when disaster hits? We may soon see: The country is facing a famine that could leave up to 15 million people without enough food this year and many laborers in the agricultural sector, which comprises 80 percent of employment, with lost income.

None of this is to say that what’s happening farther north, in Europe, isn’t an emergency. Brussels, however, has the capacity to address it. In fact, the challenge posed by refugees could actually serve as a positive impetus for Europe to catch up on some long-neglected homework: bolstering controls on its external borders, deepening political integration, and taking serious moves toward common foreign and security policies. If successfully handled — to the satisfaction of voters — those steps could breathe new life into the European idea and even spur growth; refugees and migrants could help compensate for the graying of European societies and for stalling entrepreneurship.

By contrast, there is relatively little that Jordan, Ethiopia, and other countries hosting most of the world’s displaced can do to stem or prevent crisis. At least, they can’t do what’s needed on their own. The world’s richest countries — including those that, like the United States, Canada, and Japan, are somewhat protected by geography from the full force of migration patterns — must come to terms with the fact that the magnitude of current displacement dictates a need for a truly global approach. That means more fairly divvying up the responsibilities of giving refugees homes, putting money in UNHCR’s woefully underfunded accounts, and working to create and support peace and prosperity in countries that crave it.

Today’s world is too small to allow a part — any part — of it to sink into chaos and despair.

Christian Caryl (@ccaryl), a contributing editor to Foreign Policy, is a senior fellow at the Legatum Institute and editor of Democracy Lab, which is co-published by FP and Legatum. This article originally appeared in the January/February 2016 issue of FP.