Here’s Where America’s Aid for Syria Is Going

Secretary of State John Kerry pledged about $890 million in aid to Syria and neighboring countries on Thursday, a commitment that will maintain Washington’s position as the single biggest contributor of humanitarian assistance to the five-year civil war.

Secretary of State John Kerry pledged about $890 million in aid to Syria and neighboring countries on Thursday, a commitment that will maintain Washington’s position as the single biggest contributor of humanitarian assistance to the five-year civil war.

“We’re compelled to respond to the immediate needs on the ground, and we’re doing so today,” Kerry said at a donor conference in London.

The pledge consists of about $600 million in humanitarian assistance to provide food, shelter, water, and medical care to Syrians across the region — and around $290 million in development aid for neighboring countries.

Kerry implored the dozens of other countries attending the conference to give more to what he called a “staggering” humanitarian crisis.

“By helping refugees, we remind ourselves of who we are, what we are against, and what we are for,” he said.

U.S. officials said that about 17 million people in Syria — about two-thirds of the country’s pre-war population — are in need of humanitarian assistance. Throughout the war, the United States has sent food, shelter, water, and other humanitarian aid to millions of people inside Syria and 4.6 million refugees outside the country, according to the State Department.

At the donor conference in London, a number of countries hosting large populations of refugees — in particular Jordan, Lebanon, and Turkey — implored big powers to provide more assistance. On Thursday morning, the State Department gave U.S. lawmakers a breakdown of the $600 million in direct assistance for each country. Of those funds, the top four recipients outside of Syria were Lebanon with $133 million, Jordan with $62 million, Turkey with $54 million, and Iraq with $24 million.

Below is a table breaking down the U.S. aid by aid agency and country: 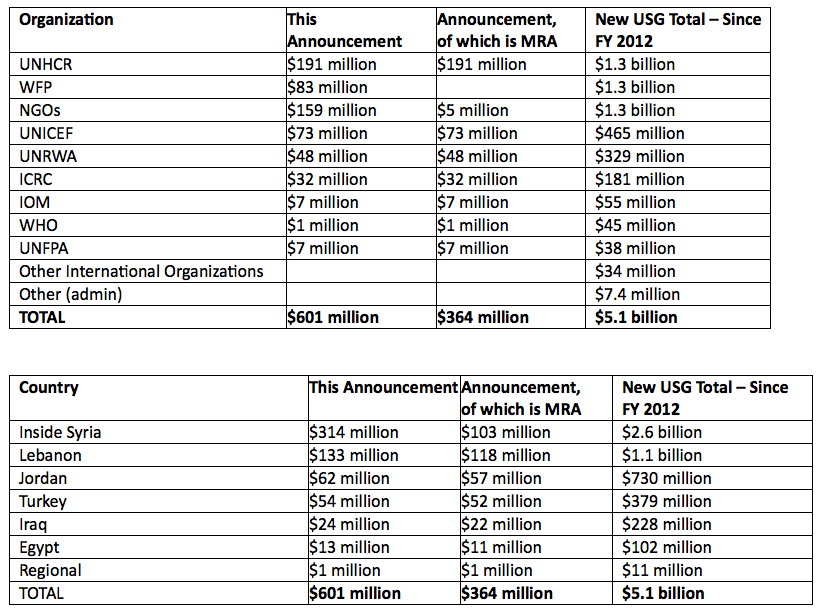