Egyptian President Abdul Fattah al-Sisi has sparked a media scandal after rolling out the red carpet on his way to a speech about austerity.

What better way for Egyptian President Abdul Fattah al-Sisi to show up to a speech about economic austerity than by rolling out 2 ½ miles of red carpet?

Sisi was driven down the red carpet Saturday in a shiny black car on his way to a Cairo suburb, where he announced cuts to electricity and water subsidies the government provides to some of Egypt’s poorest families.

“One cubic meter of water that reaches you costs me this much, and you are taking it for that much, and the state is unable to continue this way,” he explained in 6 October City, named for the day in 1973 when Egypt launched a surprise attack against Israel.

Sisi also asked that Egyptians not complain about these new austerity measures. But his wish was quickly ignored as thousands attacked the event as a publicity blunder, calling it “red carpet-gate” on social media.

The irony of his red carpet arrival — at a time of stagnant economic growth, uncertainty over whether Egypt can still attract tourists, and sliding oil prices — also wasn’t lost on the Egyptian media.

“How is the president asking us to tighten our belts while the 4km red carpet says otherwise?” asked a headline Monday on a story in Cairo’s Al-Maqal newspaper.

“Could we not have spent the money on buying duvets for people freezing in the cold?” asked Youssef al-Hussein, a talk show host for the Egyptian network station ONTV.

The criticism fell on deaf ears for members of the ruling military class.

“It gives a kind of joy and assurance to the Egyptian citizen that our people and our land and our armed forces are always capable of organizing anything in a proper manner,” Egyptian Brig. Gen. Ehab el-Ahwagy told a TV talk show host Sunday during appearances on several different shows. 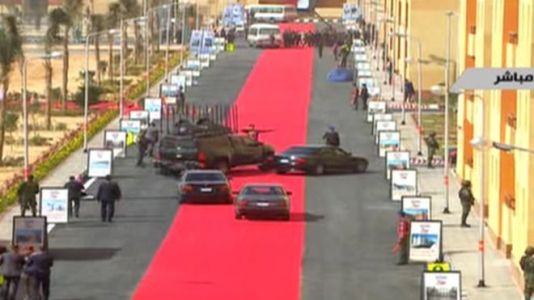 Henry Johnson is a fellow at Foreign Policy. He graduated from Claremont McKenna College with a degree in history and previously wrote for LobeLog. Twitter: @HenryJohnsoon
Tags: Egypt, Middle East and North Africa