Love and War in Eastern Congo

A rebel advance means two sweethearts must delay their wedding. But when they finally tie the knot with friends and family, fear is banished for a day.

BENI, Democratic Republic of Congo — On the morning of her wedding, the bride is up at 6 a.m. The dawn is bright and clear, but Rebecca Kirongozi looks downcast as she gets her hair done for the big day.

“She’s a little nervous about starting a new life. This will be her first time living with a man,” says Rebecca’s sister, Belinda Kirongozi, with a sly smile. Today, Belinda will be the unofficial ringleader, shepherding guests from one location to the next, always smiling, with a gleam in her light golden eyes that gives her a look of cheery intensity.

Theirs is not a rich family, but that won’t stand in the way of a grand ceremony. Friends and family have scraped together as much money as they could spare, renting Rebecca’s gauzy white gown for the week and putting plenty of fish, chicken, rice, and cake on the table (though with a caterer out of the question, Belinda had to stay up all night preparing today’s feast). 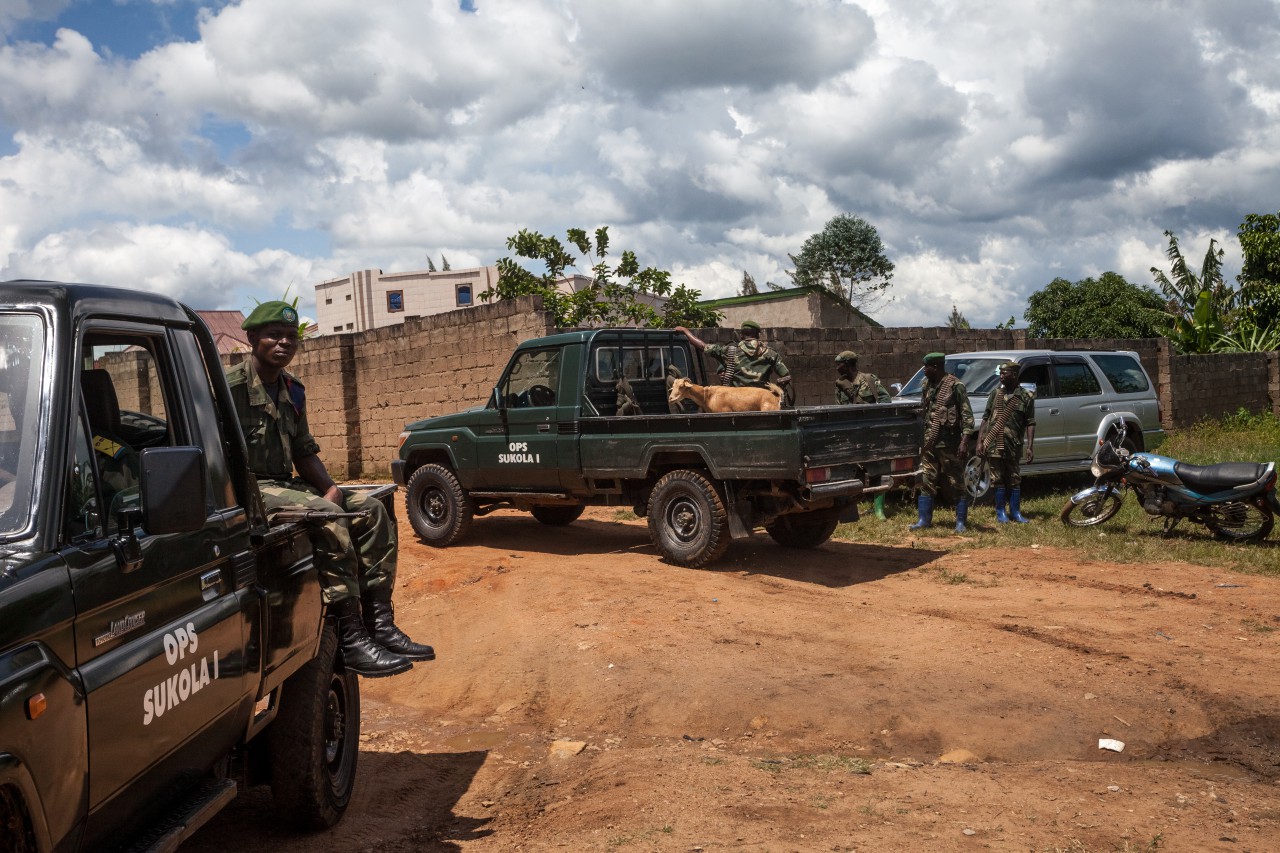 Congolese soldiers, who are part of the FARDC's operation against the Allied Democratic Forces (ADF) leave a compound in Beni. (Olga Kravets | Foreign Policy)

Rebecca’s family is a testament to the entrepreneurial spirit that defines Beni, a city with a business-savvy culture and a history of relative political independence. But as in other towns across eastern Democratic Republic of the Congo, chronic instability has held Beni back. Over the past decade, the region has fallen victim to an alphabet soup of militant groups — the CNDP, the FDLR, the M23 — that have committed atrocities against civilians, including mass murder, rape, and recruitment of child soldiers. The aim of these groups has sometimes been to capture and hold territory. Other times it has been to destabilize the region for political reasons, often at the behest of neighboring countries like Rwanda and Uganda.

Today, the Congolese government says the primary threat is the ADF, or Allied Democratic Forces, a decades-old Islamist group with Ugandan roots. But critics of the government are suspicious of its outsized rhetoric about the ADF. They argue that politicians rile up fear because they prefer to prioritize military operations over basic public needs like paved streets, good schools, or reliable electricity. The result for people like Rebecca, who is unemployed and lives in a neighborhood of dirt roads and dilapidated shops, is a chronic condition of poverty and anxiety.

But on the day of her wedding ceremony, no one wants to talk about militants, politics, or poverty. Fear and frugality are banished for the day. The wedding is a small rebellion against the prevailing narrative about eastern Congo, which would condemn this region to permanent chaos. The celebration must be beautiful — and it must be documented. Cameras will flash from dawn until dusk, capturing aunts and uncles, friends and neighbors, all posing in their Saturday best.

The wedding of Rebecca Kirongozi, 25, and Thiery Kakule Nutsukunde, 33, was attended hundreds of people, but the celebrations stopped at the sundown. As residents of Beni say, it's not safe to stay out after dark. (Olga Kravets | Foreign Policy)

By 8 a.m., Rebecca’s hair is arranged into a stunning constellation of stiff curls and sparkling appliqués. She and her fiancé, Thiery Kakule Nutsukunde, head to Beni’s municipal office, where, in a crowded room lit by a single bare bulb, they are legally wed.

The couple met four years ago in church, where Thiery said he wanted to get to know her better. Both are shy and devoutly Christian, so it took years for Thiery to work up the courage to ask for Rebecca’s hand in marriage. “The first time he proposed, I didn’t accept,” says Rebecca. “It took six months for me to accept. And now, here we are.”

Holy day! — Be a witness — holy day! — to the immortal oath of freedom / That we pass on to our children forever.

Adopted in 1960, the anthem commemorates Congo’s independence from Belgium. It was abandoned during the disastrous reign of President Mobutu Sese Seko, but reinstated as the official anthem after his overthrow in 1997. It was Congo’s song through a massive war from 1998 to 2003 — Africa’s most deadly, with as many as 5.4 million dead as a result of conflict, displacement, and disease — and through the violent uprisings that continue to take lives, especially in the east, and especially in places like Beni.

The day before the ceremony, firefights had broken out near the town of Oicha, less than 20 miles north of Rebecca’s home. Mine-resistant armored vehicles manned by U.N. peacekeepers lined the main road out of town, their guns pointed toward Oicha.

While Rebecca and her husband make their way to church for the religious ceremony, Gen. Marcel Mbangu, the Congolese army general leading the fight against the ADF, sits in the repurposed mansion that serves as his headquarters on the edge of town. He estimates that ADF membership is down to around 200 fighters, from about 1,500 a year ago, but he insists that the group’s guerrilla tactics and links to terrorist cells across the continent make it difficult to wipe out for good.

“This terrorist organization has lost its capacity,” says Mbangu. “It has turned into an asymmetric war, targeting vulnerable people.”

The ADF has been blamed for a string of gruesome attacks against civilians, mostly in rural areas, where victims have been shot at close range or hacked to death by machete. Though the group once sought to establish an Islamic state in Uganda, it has since spilled over into Congolese territory with the apparent aim of establishing bases here.

Insecurity is felt by everyone here, and it nearly derailed the wedding by chasing away friends and family who planned to help finance the ceremony. “It’s not easy to have a nice wedding, unless you’re a priest or a minister,” says Thiery, who works as a nurse for just $70 per month. “Imagine arranging a ceremony like this on my salary! I needed a lot of help from friends and family.”

When some of those helpers fled the area over the summer, the ceremony was postponed until they returned in November. “They left because of fear,” says Thiery. “There had been massacres in the farms surrounding the town.”

But the groom doesn’t want to dwell on these difficulties — not today. Wearing a purple tie and silky white gloves, he looks exhausted as the wedding photographer tells him and Rebecca where to stand, how to pose, when to smile.

Once the photo shoot is over, the guests pile back into their cars. The convoy moves at a crawl, the drivers cheering and beeping as they circle the town center. They cruise past a colorful statue that commemorates Enock Muvingi Nymawisi, a prominent opposition figure from the region.

The statue was erected at a time when Muvingi’s party was allied with President Joseph Kabila’s ruling coalition. But a few years after his party broke away again in 2011, the statue was defaced. Someone chopped off Muvingi’s head and both hands during a government-enforced curfew. It still it stands there, neither restored nor removed, like a macabre warning at the center of town.

Now that Kabila seems intent on extending his mandate beyond constitutional term limits, a move that ignited violent protests in 2015 and has rallied the opposition against him, some see the ADF as an especially timely distraction.

Dan Fahey, a former coordinator of the U.N. Group of Experts in North Kivu, the province in eastern DRC where Beni is located, describes the ADF as “a useful enemy.” While there is no doubt that the group is responsible for some attacks in the area, he says that everyday disputes over land, money and power have been falsely blamed on the ADF. “If you think it’s just ADF that’s doing everything, then you’re never going to get anywhere in terms of figuring out how to solve it,” Fahey says. 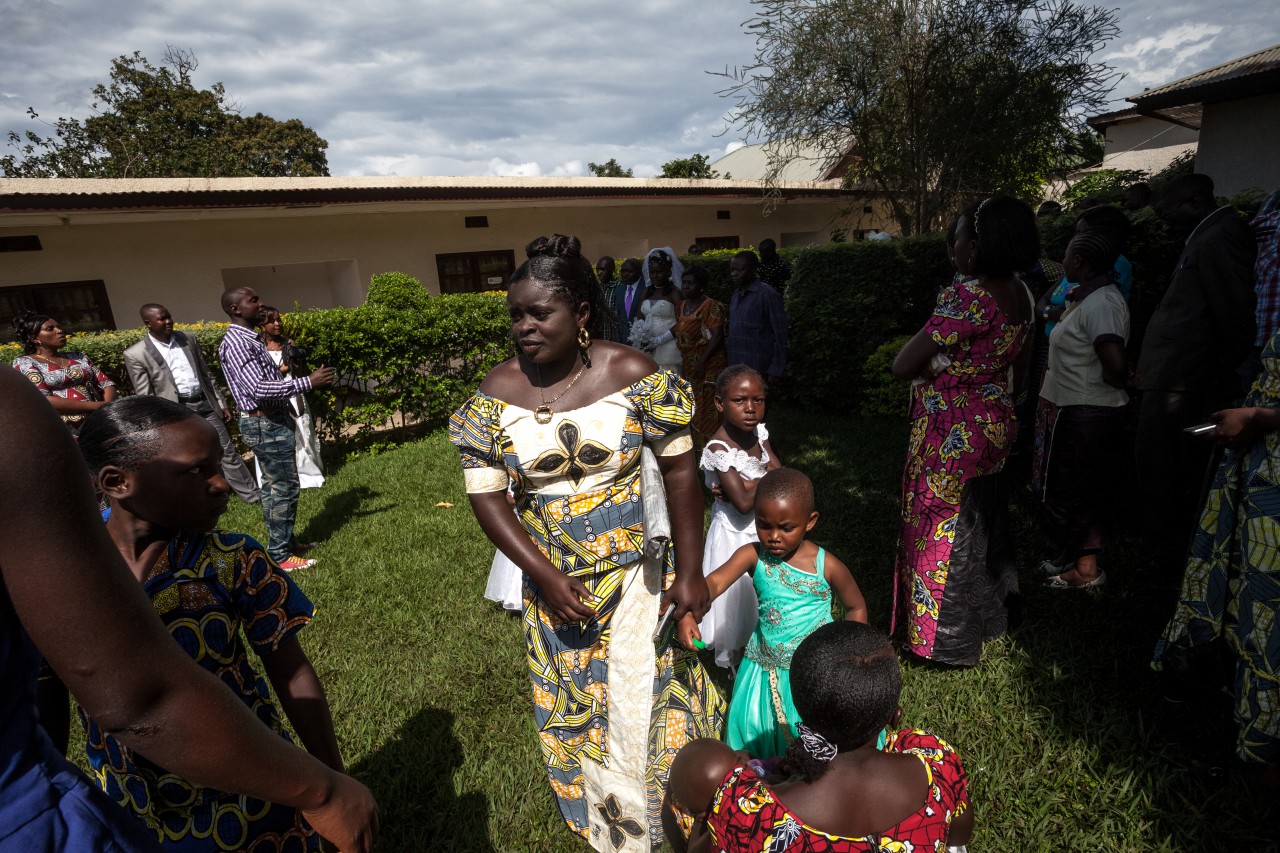 The wedding convoy moves on. Its final stop is a reception hall overlooking dense forests of palm. Here, Belinda’s feast is served and the guests become increasingly boisterous, though Rebecca stays cool and calm.

“Nah, she’s not always like this. Maybe she’s just shy in front of all these people,” Abighael Mundeke Vangi, Belinda’s 16-year-old daughter, says of the bride.

Abighael has her mother’s bright eyes and direct manner, and is wearing a dress in the same busy pattern of orange and blue. She says she isn’t sure she’ll ever get married herself.

“My dream is to do something, so people can say I did well,” she says.

She could go into nursing, maybe. Or journalism. Or tourism. And although she doesn’t know much about politics, she has a sneaking suspicion that no matter what the government promises — development, security, investments in education and healthcare — her options here in Beni will never be enough.

“I can’t afford to go to university,” she says. “I just want to get out of Congo. Congo is no good.”

The party is about to begin. As the guests gather in the reception hall, Rebecca and Thiery stand solemnly before a three-layer cake; behind them is a wall festooned with green and orange ribbons. A DJ wearing a plaid cap teases the young couple and orders them to dance. They do, looking embarrassed as they execute a stiff rumba. Then the DJ plays a song by the famous Congolese musician Koffi Olomide, yelling at the audience to clap. They do, keeping time with the beat.

The sun is beginning to set as the guests stand up to dance, hands raised, dipping their fingers into the shafts of golden light slanting in through the windows. Then it’s time for the giving of gifts, and the guests march up the aisle with brightly wrapped packages, leaving them to pile up at the newlyweds’ feet. They rumba back to their seats, stepping on each other’s toes as a traffic jam forms in the aisle.

There is an eruption of light shoving and loud laughter. Even the bride cracks a smile.

Reporting for this story was supported by the International Women’s Media Foundation.

is a freelance journalist based in Addis Ababa, Ethiopia.