Pyongyang's nuclear tests rattle everyone in the world — except investors.

The world — or at least the marketplace — has grown accustomed to North Korea’s nuclear belligerence. Pyongyang has conducted four nuclear tests and five long-range missile tests since 2006. Its most recent nuclear and missile tests, on Jan. 6 and Feb. 7 2016 respectively, incited the United States and China to announce in late February that they would work together on tough new sanctions. But while the regime’s experimentations with its weapons of war may have rattled the region, they’ve failed to shock stock markets.

Why? It seems that while Pyongyang’s provocations erode Asia’s security, they do not weaken the region’s economic vitality. To test this hypothesis, we examined whether the Shanghai Composite Index (SSE) and Seoul’s Korea Composite Stock Price Index (KOSPI), China’s and South Korea’s most important stock market indexes, revealed any anxiety following a North Korean nuclear test.

Consider, for example, concerns about market volatility in Europe following the 2005 terrorist attacks on London, and the 2015 attacks in Paris. If the North Korean nuclear tests moved markets anywhere, it would likely be China, Pyongyang’s biggest benefactor, or South Korea, which lives under constant threat of attack from their unstable neighbor. (The nuclear tests have had no measurable effect on the New York Stock Exchange (NYSE), the world’s largest.)

We controlled for the impact by looking at financial market data three months prior to and after the four nuclear tests. If nuclear tests disturbed markets, there should have been either a decrease in value in the stock market, or a changed trend in the volume of trading after the test. Instability should have caused investors to panic and exit these markets — or to have at least increased trading volume, as investors sold their stocks, or capitalized on the crisis by selling short.

For the first and second North Korean nuclear test, on Oct. 9, 2006 and May 25, 2009, respectively, the previous trend of rising prices was unaffected on both exchanges after the test. Some mild price fluctuations on the KOSPI and the SSE followed the Feb. 12, 2013, test, but these swings were already apparent prior to the test, indicating little, if no causal impact of the nuclear events on investors. 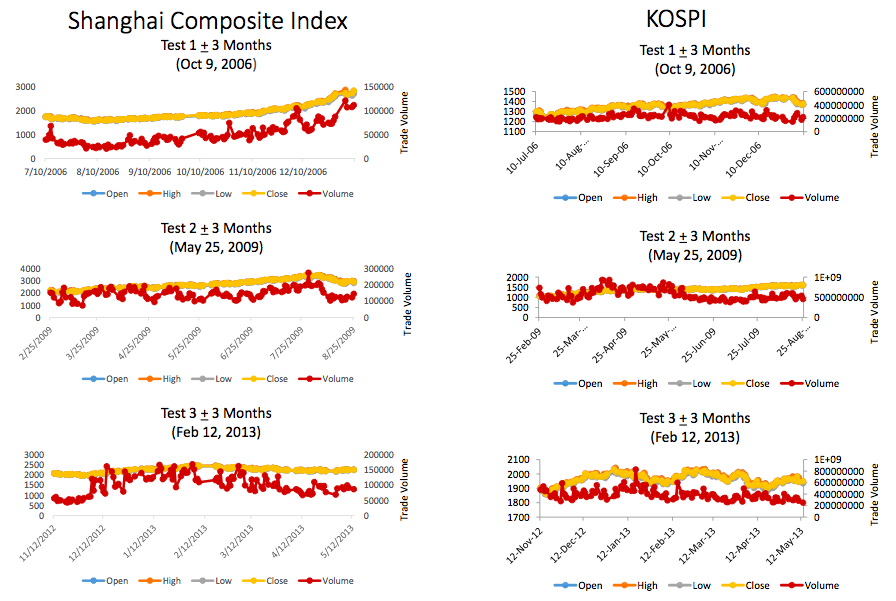 The nuclear tests did not seem to affect where the market closed, nor trends in where prices were headed over the six-month period examined. The recent nuclear test, on Jan. 6, 2016, coincided with a systemic downturn in prices on the two exchanges — a trend that began in late December.

However, the nuclear tests may have depressed trading volume. This is clearest in May 2009, in South Korea: after the test, the market operated at an average of roughly 78 percent of pre-test levels during the following three months. This depressive effect seemed present, though far milder, for the KOPSI after the 2006 and 2013 test, and for the SSE in 2013.

It is difficult to conclude, however, that a decrease in trading volume constitutes a sign of panic. Rather, the strongest impact of the tests was uncertainty — which may have caused investors to hold their shares as they waited for policy responses. Trading volumes in response to the January 2016 nuclear test also seem unaffected.

Of course, past performance is no guarantee of future predictability. If tensions rise in the coming quarter, that perhaps may influence the markets. Until then, North Korean dictator Kim Jong-un’s antics may grab the attentions of the media and the public — but not that of the bourse.

Victor Cha is a professor at Georgetown University, a senior advisor at the Center for Strategic and International Studies, and the author of Powerplay: The Origins of the American Alliance System in Asia. Twitter: @VictorDCha