Can This Man Keep the ‘Special Relationship’ Special?

As a Brexit looms, Britain's new ambassador wants to reassure Washington that London isn't turning its back on the world.

It’s not an easy time to exude confidence if you’re Britain’s newly appointed ambassador to the United States. But as he sits on a plush couch beneath a towering portrait of Winston Churchill, Sir Kim Darroch, 61, makes a pretty good go at it.

At the moment, the odds of his country exiting the European Union are higher than ever, which is sending the pound into a tailspin ahead of the United Kingdom’s historic June 23 referendum. London’s popular mayor has broken with Prime Minister David Cameron and lent his support to the so-called “out” campaign, giving the secessionist cause a charismatic leader for the first time. Scotland’s first minister says her Celtic enclave will “almost certainly” demand a second independence referendum if Britain ditches the 28-member club — creating a new threat to Britain’s territorial integrity.

Meanwhile, Washington, London’s closest ally, is alarmed at the prospect of losing an influential partner in the world’s largest trading bloc and has already dispatched Secretary of State John Kerry to urge the British public to support the status quo. The Brexit fears come as the United States increasingly looks to Germany as its most important economic partner in Europe and to France as its most important military partner.

But for Darroch, the gloomy headlines fail to convey Britain’s comparative strength on the global stage and the resilience of the U.S.-U.K. relationship.

“It doesn’t feel to me there is a great amount of self-analysis and self-doubt on our place in the world at all,” he said, during a wide-ranging discussion at his luxurious residence in Washington.

U.S. confidence in Britain’s reliability as a security partner dipped most dramatically in August 2013, when the U.K. Parliament rejected military action against Syrian President Bashar al-Assad’s regime after he used chemical weapons against his own people. The vote undercut President Barack Obama’s own sales pitch to Congress to use force in Syria and raised questions about the strength of the transatlantic alliance.

In many ways, Darroch is uniquely qualified to reassure Washington his island nation isn’t about to turn inward and retrench. Few doubt his ability to channel the prime minister, given the nearly four years Darroch served as Cameron’s top national security advisor before coming to the United States.

But as importantly, Darroch appears eager to embrace the trappings of the Washington ambassadorship, an exercise in soft power involving lavish embassy parties, intimate VIP dinners, and whispered exchanges.

“This is the finest residence in the British diplomatic estate,” he said of his new home, a $31 million homage to Queen Anne-style architecture. “It is basically a platform for advancing the whole range of British interests, so it is right that it should be filled as much as possible with American guests and British visitors, and be a center for trade promotion, seminars, and parties.”

(When he’s not at home, a driver whisks Darroch around town in a sleek Jaguar XJL, “an extremely cool car” and a “beautiful piece of engineering,” he says.)

Conversationally, he oscillates comfortably between subjects of culture and geopolitics, the most important being the notion that Britain is in decline. In combating that view, he rattled off a list of superlatives about Britain’s privileged economic footing and emphasized the close coordination between U.S. and British leaders on the refugee crisis in Syria, the political crisis in Ukraine, and the fight against the Islamic State in the Middle East.

“John Kerry and Philip Hammond talk at the moment almost daily,” he said, referring to the British foreign secretary. “The prime minister talks regularly with the president. And I’ve had an extraordinarily warm reception around town.”

To be sure, Britain’s recent economic performance — one of the fastest-growing economies among leading industrial states for the last two years — is the envy of many developed nations, and its reputation on the international stage has recovered considerably since Cameron’s re-election in May 2015. In particular, the parliamentary vote in December to join the bombing campaign against the Islamic State in Syria was viewed by some as a step toward restoring Britain’s relevance in global affairs.

But a Brexit vote this summer could change all that — and current polling shows a dead heat between the rival campaigns. Last week, in the first online YouGov poll since Cameron announced the referendum, a survey of 3,482 British adults found that 38 percent wanted to leave the EU, while 37 percent wished to remain; 25 percent were undecided.

That’s a scary notion for Washington, which often relies on Britain to promote and support positions inside the EU that align with U.S. interests. That dynamic proved vital after Russia annexed Crimea in 2014: Britain, along with Germany, helped stiffen EU resolve for stepped-up sanctions against Moscow as other countries, such as Italy and Greece, waffled.

With so much riding on the referendum this summer, Darroch has his work cut out for him in Washington.

“How will Ambassador Darroch explain where Britain is going when Britain itself doesn’t know?” said Fiona Hill, a Europe scholar at the Brookings Institution.

It’s clear he will be guided by both his close working relationship with Cameron and his intimate understanding of British anxieties over the bureaucratic leviathan that is the European Union. Prior to his appointment in London, Darroch served as Britain’s emissary to the EU, deeply entrenching himself in the Brussels-centric debates surrounding enlargement, integration, and economic recovery.

“It’s known that he is connected to Cameron personally, so he can serve as a back channel between the president and the prime minister,” said Hill.

For an ambassador, that personal connection is increasingly critical to remaining relevant in an age when foreign ministers can email, call, and video conference with their counterparts from anywhere on Earth.

One of Darroch’s predecessors, David Manning, followed a similar path.

Before becoming Britain’s ambassador to Washington in 2003, Manning served as Tony Blair’s foreign-policy advisor and leveraged that relationship to earn respect and clout in D.C.

“Manning was useful less because he was ambassador than because he was still Blair’s foreign-policy advisor, essentially telecommuting from a swank residence on Massachusetts Avenue,” said Jeremy Shapiro, research director at the European Council on Foreign Relations. “Otherwise, with everybody speaking English and talking to each other all of the time, the value added of the ambassador is a bit nebulous.”

Darroch acknowledged — ever so diplomatically — that his Cameron connection is an asset.

“Any British ambassador in a place like Washington would be able to get messages to No. 10,” he said, referring to the prime minister’s office on Downing Street in London. “But the benefit of having worked with the prime minister is understanding how he works, understanding what really matters to him, and having seen his relationship with President Obama at close quarters.”

Amusingly, the man Darroch said he plans on modelling his ambassadorship after most is not Manning, but Christopher Meyer — a Blair-era ambassador still remembered around town for leaving his post in 2003 and writing a bombshell tell-all called D.C. Confidential, filled with palace intrigue and juicy anecdotes about top U.K. and American officials.

“He was an amazingly dynamic and brilliant figure,” said Darroch.

But unlike Meyer, a loquacious man who also served as press secretary for the Foreign Office, Darroch said the public should not expect a kiss-and-tell memoir after he leaves office: “I’ve never kept a diary,” he said, “and I have no ambitions to do that.”

One of the things Darroch said he admired most about Meyer is a skill that is a prerequisite for any British ambassador working in the Washington Embassy.

“He was a fantastic party-giver,” mused Darroch, a testimony confirmed by just about anyone active in DC’s embassy party scene in the late-90s and early 2000s.

Kevin Chaffee, a longtime editor of Washington Life magazine and an expert on D.C.’s political and social power structure, said Meyer and his wife, Catherine, “were very well-known for playing the scene.”

“The British Embassy remains one of the premier invitations to receive on the Embassy Row social scene,” said Chaffee, who noted that a British Embassy invite was only trumped by galas at the White House or National Gallery of Art.

Darroch’s immediate predecessor, Sir Peter Westmacott, who retired in January after a lifetime in the foreign service, also cultivated a reputation for hospitality.

He had an uncanny ability to transition from stuffy, 18th-century Englishman by day to wise-cracking, costume-wearing emcee by night. Parties at the ambassador’s residence on Embassy Row boasted an invitation-only guest list exceeding 200 people. Westmacott would often entertain with slideshows offering a tongue-in-cheek spoof of international affairs or historic moments in the “special relationship” — like when the British set fire to the White House in 1814.

One of his most raucous galas, in February 2014, featured an eerily talented Beatles cover band to mark the 50th anniversary of the Fab Four’s invasion of America. The pulsing set list of vintage Beatles hits produced that rare moment when official Washington stopped exchanging business cards and started cutting loose on the dance floor, including Obama’s National Security Advisor Susan Rice, who confessed to a reporter that she’s a “big Beatles fan” before beelining to a crowd of dancers. Westmacott navigated the throngs of official Washington in a moptop wig and a Mod Nehru-style suit.

Those close to Darroch say he and his wife, a first-grade teacher at the British International School of Washington, will fit into the host and hostess role quite comfortably.

He’s witty and humorous — a fact that has already surprised some of his newest contacts in Washington given the robotic pose he struck while receiving his credentials from Obama in a photograph that went viral on the Internet. 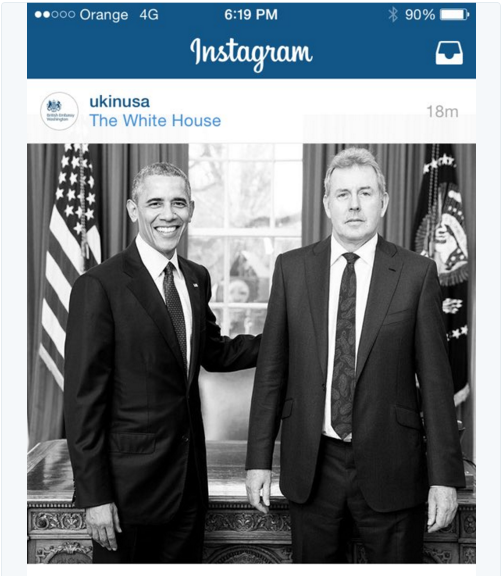 “British engineering at its best. It almost looks like a real human,” joked one commenter on Reddit.

“Our humanoid in Washington,” read a headline in Britain’s Telegraph newspaper.

Turns out, Darroch’s not quite the stiff old Brit he appears to be in the photo.

His first love affair with American culture came in his teenage years in the 1960s and 1970s during the period of epic American road movies. “You wouldn’t have heard of it, but my favorite single film of all time is starring Jack Nicholson called Five Easy Pieces,” he waxed nostalgically. “Up there in the top five is Easy Rider and Two-Lane Blacktop starring James Taylor, a terrible actor but a great folk singer. Vanishing Point and Chinatown were also in that period.”

“An astonishingly creative period for American cinema,” he added.

If he could spend a weekend anywhere in America, it would be in San Francisco: During the 1980s, he and his friends used to sail around the San Francisco Bay on a 35-footer. “It’s got an astonishing natural setting, and if you’re a sailor, it has some of the best sailing water on the planet,” he said.

Despite their hallowed status in Washington’s social scene, British ambassadors tend to disappear rather quickly when their tenure ends, due to a well-cultivated sense of pride. Westmacott, a celebrated diplomat and former ambassador to Turkey, left promptly for Boston after his tenure ended in January. He now lectures as a senior fellow at Harvard University’s Belfer Center for Science and International Affairs.

“There’s nothing more pitiful than ex-ambassadors crawling around,” he told the Guardian in 2012. “They look like lame dogs.”

Darroch is just getting started, but at 61, he said he expects to leave government after his tenure ends. “It’s traditionally people’s last job, and certainly at my age it looks like the last job before going to the private sector,” he said. “But that’s a long ways ahead. Let’s just deal with tomorrow, or even this afternoon.”