Thanks to Poachers, More African Elephants Are Being Killed than Born

Despite a decline in poaching, African elephants are still being killed at a rapid pace.

Elephant poaching in Africa reached an all-time high in 2011, with illegal hunters responsible for 75 percent of elephants’ deaths on the continent.

Since then, and despite surveillance programs and other massive efforts to curb poaching, the overall population of African elephants has continued to shrink. A report Thursday by the Convention on the Trade in Endangered Species put deaths by poacher at more than 14,000 in 2015, making up 60 percent of overall recorded elephant deaths on the continent. Other monitoring groups claim upwards of 20,000 elephants were killed for ivory last year.

Poachers have gone to extreme lengths to protect their illegal practice: In January, Tanzanian poachers killed a British pilot by shooting down his helicopter while he was flying over the Maswa game reserve to search for hunters targeting elephants there. Since 2011, the wild elephant population in Tanzania alone has been cut nearly by half, from 110,000 to around 43,000 today.

According to Thursday’s report, Kruger National Park in South Africa has experienced one of the most worrisome spikes, with more than double the number of poacher-related killings taking place last year than in 2014. South Africa will host a conference in September to address how countries around the world can better handle the challenges posed by poachers.

Illegal hunting practices grabbed headlines for a few days last summer when Minnesota dentist Walter Palmer and his local guides lured Cecil the lion out of a protected national park in Zimbabwe, then shot and killed him. Cecil’s death prompted the Obama administration to put lions living in West and Central Africa on an endangered species list that would make it harder to bring them back.

And because this is America, African trophy hunting has even found its way into the 2016 presidential race. In 2012, TMZ published photos of Republican presidential frontrunner Donald Trump’s son, Donald Jr., holding a dead elephant’s tail in his right hand and a knife in his left. Other photos published by the celebrity news site included Trump Jr. and his brother Eric posing with a dead cheetah and a crocodile hanging from a tree, with a noose around its neck. The photos resurfaced on social media last year and have made the rounds again and again as the elder Trump bursts ahead in the presidential race — because what does Twitter love more than the opportunity to call Trump’s son “disgusting” and “blood-thirsty?” 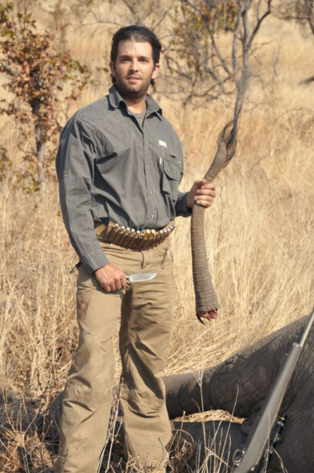 For the record, the younger Trump maintains that the hunt was legal, even if it did take place around the same time poaching reached an all-time high on the continent.

“Anyone who thinks hunters are just ‘bloodthirsty morons’ hasn’t looked into hunting,” Donald Jr. told Deer and Hunting magazine. “If you wait through long, cold hours in the November woods with a bow in your hands hoping a buck will show, or if you spend days walking in the African bush trailing Cape buffalo while listening to lions roar, you’re sure to learn hunting isn’t about killing. Nature actually humbles you. Hunting forces a person to endure, to master themselves, even to truly get to know the wild environment. Actually, along the way, hunting and fishing makes you fall in love with the natural world. This is why hunters so often give back by contributing to conservation.”

Presidential candidate Trump has defended his sons, saying he trusted that any hunts they carried out were legal.

“My sons love hunting,” he told TMZ. “They’re hunters and they’ve become good at it.  I am not a believer in hunting and I’m surprised they like it.”