Mapped: The Islamic State Is Losing Its Territory — and Fast

In the last three months, the Islamic State has lost an additional 8 percent of its territory in Iraq and Syria.

At the end of 2014, the Islamic State controlled one-third of Iraq and one-third of Syria — a land mass roughly equal to the area of Great Britain — where the extremist group ruled over upward of 9 million people.

Less than two years later, the self-proclaimed caliphate has lost 22 percent of that territory, according to a report published this week by IHS Jane’s 360, a defense analysis think tank.

The Islamic State surrendered more than half of that territory — 14 percent — last year and 2016 has already proven crippling. According to IHS Jane’s, after Kurds and a small number of moderate Arab rebels ousted the Islamic State from the northern Syria border town of Tal Abyad, the extremists have struggled to balance their budget. Tal Abyad had long served as a gateway for supplies and recruits from Turkey to the Islamic State’s de facto capital in Raqqa.

Those same Syrians later formed a coalition that, with help from Russian and U.S. airstrikes, claims it is now within 20 miles of Raqqa.

And with pro-Assad forces now advancing on the ancient city of Palmyra and making gains in east Aleppo, ISIS is only facing more pressure.

It remains largely unclear what effect Russia’s withdrawal of its armed forces in Syria, which began Tuesday, will have on the Islamic State. Although Russian fighter jets have mostly targeted other rebel groups, they have also backed the Syrian regime’s offensives against ISIS. Russia will retain its capacity to operate out of its airfield in Hmeymin and naval base in Tartus, and has signaled that it will continue striking Syrian rebels.

IHS Jane’s mapped the extremist group’s losses in 2015. Take a look below: 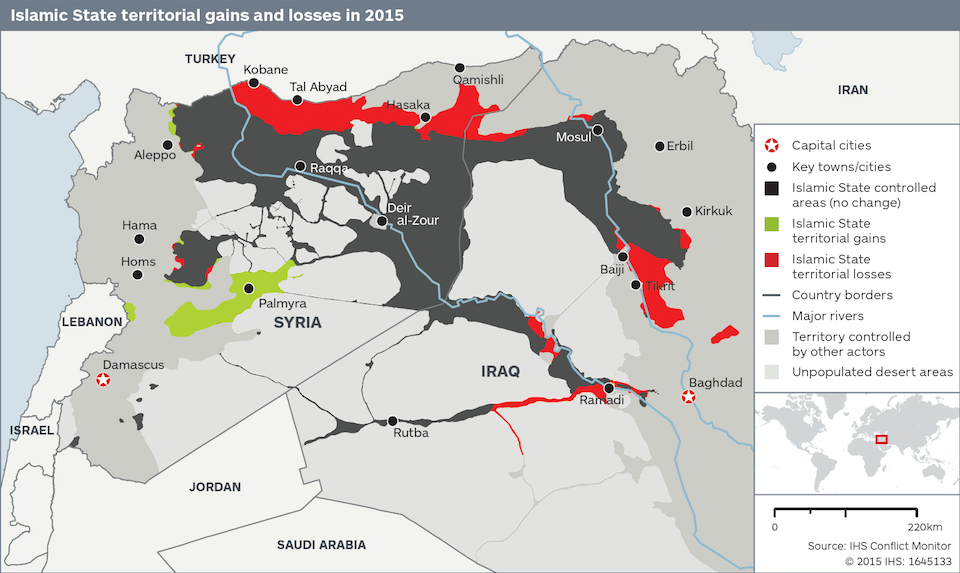