One Saudi’s Protest, Through The Viewfinder

A photography exhibit in Washington by a Saudi doctor-turned-artist casts a critical eye on Riyadh’s relationship with big oil and Mecca.

Five images, glowing with the black and blue hue of an x-ray, stand side-by-side in a row. On one end, Saudi Arabian artist Ahmed Mater’s eerie skeleton holds a locked and loaded handgun to his skull. On the other, a gas tank and its pump mirror Mater’s suicidal pose. In between, three images gradually morph into the two that bookend the installation, “Evolution of Man,” one of Mater’s best known works that in video form challenges the viewer to determine where the gas tank ends and the man begins.

It’s one of the 36-year-old artist’s projects that is most obviously critical of Riyadh’s relationship with big oil, an outward judgment that could be considered dangerous in the country’s tightly controlled political sphere. But Mater says the fact that so many countries have complicated relationships with their oil supplies has helped make his work less personal to just Saudi Arabia, and thus protected him from backlash at home.

“I think it was a little bit offensive, but it has a very international meaning,” Mater said in an interview with Foreign Policy arranged by the Middle East Institute in Washington last week. “It’s like an international voice. It could be for a Saudi or for anyone else in the world.”

Mater was in Washington for the opening of “Symbolic Cities: The Work of Ahmed Mater,” his first-ever solo exhibit to appear in the United States. It opened at the Smithsonian’s Freer and Sackler Galleries, and will run through Sept. 18.

His assortment of multimedia work explores a rapidly changing Saudi Arabia through views of the country’s abandoned oil fields and its rapid commercialization of holy sites in Mecca.

Mater, a trained physician, grew up watching his mother paint traditional murals in the southern Saudi region of Asir. Today, he is one of Saudi Arabia’s most prominent modern artists and his works, which include photography, video, and performance, among other mediums, are informed both by his medical background and his concern about Saudi’s changing social, political, and religious landscapes.

Carol Huh, the exhibit’s curator, told FP she has been interested in Mater’s work for years and saw dedicating an exhibit to him as an opportunity to address “universal concerns about how much construction and urban change is affecting how people identify with places.”

The exhibit opens with “Antenna,” a giant, fluorescent sculpture of a television antenna that Mater said was inspired by his childhood memories of adjusting the antenna on his family’s roof to get information from outside Saudi Arabia. For Huh, it also served as an ideal opening to “Symbolic Cities” because it “was a way for me to have a visual embodiment of what his practice is, which is sending and receiving signals to better understand his world through art.”

The exhibit in Washington, Huh said, shows Mater’s shift to use more photography in recent years, with photos that are often shot from angles far above the subjects on the ground. One installation features a wall of photos of dusty, deserted remains of regions that have already been scavenged for oil. In one, an abandoned Ferris wheel, as seen from a helicopter where Mater shot the series, serves as a reminder that many of the communities originally installed to search for oil have since been deserted.

Another displays a series of photos taken from a Black Hawk helicopter used by Saudi security forces to monitor Mecca from above. The photos, which Mater shot through a surveillance camera, offer a sense of the government’s role in controlling Mecca, the holiest city in Islam that draws Muslim pilgrims from around the world.

Other photos featured in the exhibit focus more specifically on what Mecca looks like through the eyes of a visitor. In “Nature Morte,” a bowl of fresh fruit sits like a still life painting in front of a large window that looks down on the Kaaba stone, the heart of Mecca. Taken in a five-star hotel, the photo encompasses how these views have been commercialized as Mecca is filled with new luxurious experiences that sharply contrast the reason pilgrims have traditionally visited the city. “A room with a view,” Mater said with a laugh. 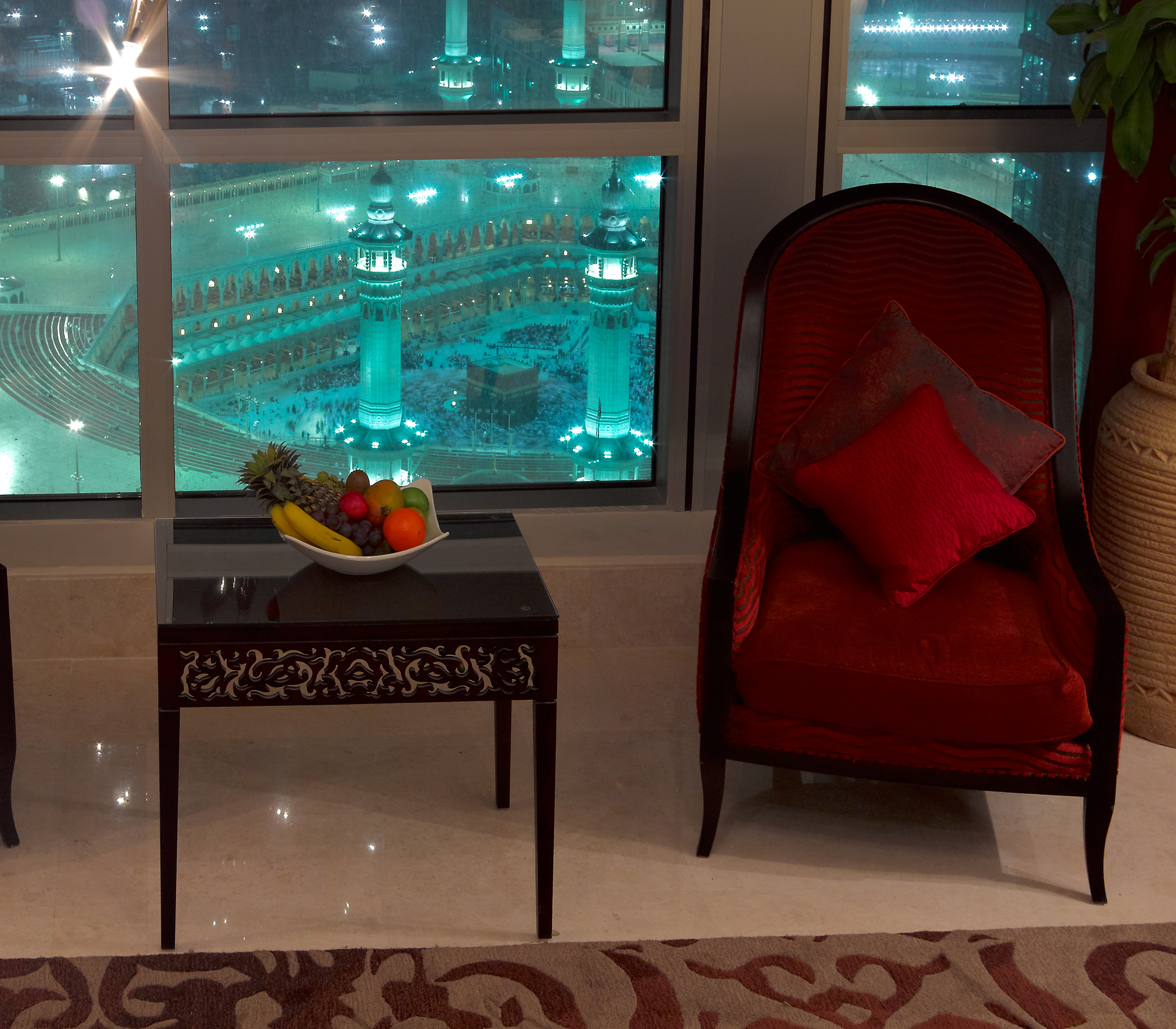 In another, men sit on construction materials scattered beneath a billboard advertising the future of Mecca’s skyline as luxurious and modern. They look dejected and impatient, as though they are waiting for a bus that never showed up. “It’s between the dream and reality,” Mater said. “What I like about it is how they are normal people and it’s like they are waiting. Is there a place for these people inside of this? Is there a stake for them in this public space in their life?”

Another photo features a view of the city from far above, where it’s impossible to see the holy site without also seeing the dozens of construction cranes that surround it.

Unlike earlier exhibits where his use of x-rays made his background as a doctor more evident, the influence of Mater’s former career is less outwardly obvious in his works on display in Washington. (He stopped practicing medicine two years ago.) Still, he insists the way he approaches Mecca is the same way he would a patient in the hospital. “I treat the city like a body, like it has feeling,” he said.

When asked whether, metaphorically, he thinks Mecca has become sick, Mater paused. “Mecca needs a lot of intervention and people to take care of this holistic place,” he said. “I remember it when I was a child; it’s very different. Everything’s been destroyed, the heritage and the memory. My question is, what will be the memory of the next generation? What will be the memory of Mecca?”

Based on the trajectory he warns about in “Symbolic Cities,” he can probably answer his own question: The city could very well be unrecognizable.

The fear of that irreversible change, Huh said, is reflected in much of his more recent work.

“There’s this strong sense, it’s a term he uses often, that there is this overwhelming artificial light that’s taking over these holy places,” Huh said.