On April 3, the Washington, DC-based non-profit International Committee of Investigative Journalists (ICIJ) dropped what struck many as a bombshell: news that a leaked trove of 11.5 million previously secret files from Panama-based law firm Mossack Fonseca showed a dizzying array of world leaders have, or are closely connected to, offshore entities. Its shockwaves have reached Beijing: Relatives or contacts of several sitting and former Chinese high officials are prominently listed, including the brother-in-law of current President Xi JInping, the daughter of former Premier Li Peng, and the grand-daughter of Jia Qinglin, a former member of the Politburo Standing Committee (PSC), a tiny and elite group of officials that runs the country. Hong Kong, a special administrative region of China that functions under a separate legal system, also lives up to its reputation as a haven for mainland capital: the ICIJ report tags it as the largest source of “intermediaries,” meaning the lawyers, accountants, and other middlemen that make the system of veiled ownership work.

Using an offshore entity isn’t, by itself, against the law. But because offshore entities make it easier to hide ownership of cash and assets, the news is juicy fodder for anyone watching China’s notoriously opaque leadership for signs of the corruption that President Xi has worked so hard to extirpate.

Then again, China-watchers have come to expect such revelations to elicit mere whimpers within the country’s borders, mostly because the country’s media apparatus is accustomed to wide and deep censorship of anything likely to tar the reputation of Beijing’s top leadership. Chinese media is, not surprisingly, mum on the subject. A leaked provincial government directive reported by California-based China Digital Times orders media outlets to “find and delete reprinted reports on the Panama Papers. Do not follow up on related content, no exceptions. If material from foreign media attacking China is found on any website,” the directive adds, “it will be dealt with severely.”

And true to form, China’s online censors have also gotten busy in the wake of what the ICIJ calls the “Panama Papers.” Neither the Romanized word “Panama” nor the names of several of those named can currently be searched on Weibo, the country’s largest microblogging site and the locus of many (often coded) public discussions about the indiscretions of Chinese officialdom. Searches for the names of former premier Li Peng, his daughter Li Xiaolin, and Xi Jinping brother-in-law Deng Jiagui are also blocked on Weibo, and only some results for those searches are shown on Baidu, China’s most popular search engine. In both cases, a note in bold text states that “relevant rules and regulations” have led to suppression of results. (Baidu has done the same with Jia Qinglin, also named in the report.) It is not possible to ascertain when these words were first blocked: 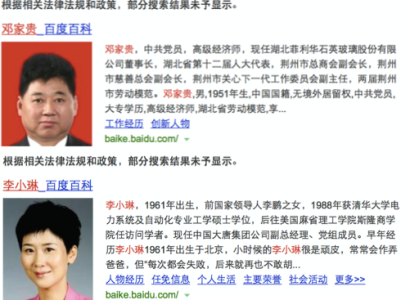 A small handful of online posts about the Panama Papers gained traction before getting the axe. According to Weiboscope, a project of Hong Kong University that tracks deleted content on Weibo, one popular but now deleted post insisted that “no wall keeps out all the wind. In an information age,” it continued, “cheating and blinding people can’t last forever. The truth will one day see daylight.”

To some extent, that’s already true, as China’s information blockades have not quashed all online discussion. As usual, however, web users have had either to skirt the outer edges of the topic in order to avoid being censored — or worse, being visited by authorities or even jailed under rules that criminalize the online posting of “rumors.” One sports commenter wrote, “Reminder: simply having an overseas company is not illegal.” The statement is correct, but of cold comfort to many. One wrote in response that law “should not be used as a shield,” and another noted that offshore entities are often used “to launder money.”

In particular, Li Xiaolin has continued to draw attention, partly because the well-known oil executive and daughter of former Premier Li Peng declared in an April 2014 interview with state-run China News that “I myself don’t have an offshore company.” The statement came just months after the ICIJ identified the younger Li in January 2014 as one of dozens of rich Chinese who used offshore tax havens. It’s perhaps not surprising that those words have now come back to haunt her, with one user reposting her words. According to mirror site Freeweibo, other posts discussing the latest revelation about Li have not survived.

There was a time when Chinese social media sizzled with juicy talk about China’s leaders. In early 2012, at the “two sessions,” a meeting of Chinese legislators and elite hob-nobbers, social media users widely rebuked Li, who also participated, for wearing a pink pantsuit from designer Emilio Pucci worth almost $2,000. Also in early 2012, the stunning fall of Chinese politician and onetime PSC aspirant Bo Xilai set social media aflame, cementing its place as a crucible in which official careers could be speedily destroyed. Since then, Chinese leaders have learned to keep censors working harder, and at all hours. When the New York Times published an award-winning dive into then-Premier Wen Jiaobao’s family wealth in October 2012, the article quickly vanished from the Chinese Internet, and the entire Times website was blocked.

Given the tight lid on information sharing in China, the Panama Papers may not yet have yet shaken citizen faith in Beijing’s top leadership. But ICIJ has said that more information is yet to come. China’s censors are likely to stay extra vigilant.

Update, April 5: This article has been updated to clarify that searches for the Romanized word “Panama” have been blocked on Weibo. Chinese-language searches for “Panama” do not appear blocked as of this update.

In Rare Unanimity, Biden Could Double Down on Trump’s Uighur Sanctions

Kamala Harris Taps Ex-Diplomat to Be Her National Security Advisor