Kim Kardashian may have 66 million followers on Instagram, but that doesn’t make her an expert on the frozen conflict in the mountainous Caucasus enclave of Nagorno-Karabakh.

Kim Kardashian may have 66 million followers on Instagram, but that doesn’t make her an expert on the frozen conflict in the mountainous Caucasus enclave of Nagorno-Karabakh.

That, at least, is the view of the Azerbaijani ambassador to the United States, who blasted the reality TV star in an interview with Foreign Policy after she appeared to weigh in on behalf of the ethnic Armenians battling Azerbaijan for control of the restive region.

“She’s very famous and beloved by her fans, but matters of war and peace are a little too serious for a reality-TV star,” Elin Suleymanov said in telephone conversation.

“I personally would be a very bad reality-TV star, so I try not to cross into areas I’m not familiar,” he added. “I’m not sure Ms. Kardashian is a military or political analyst, so maybe we should all do what we do best.”

The world-famous model and TV personality posted an image sympathetic to Armenian security forces on Monday that featured military helicopters and tanks flying the Armenian flag with the message “Praying for everyone in Armenia and all around the world!” 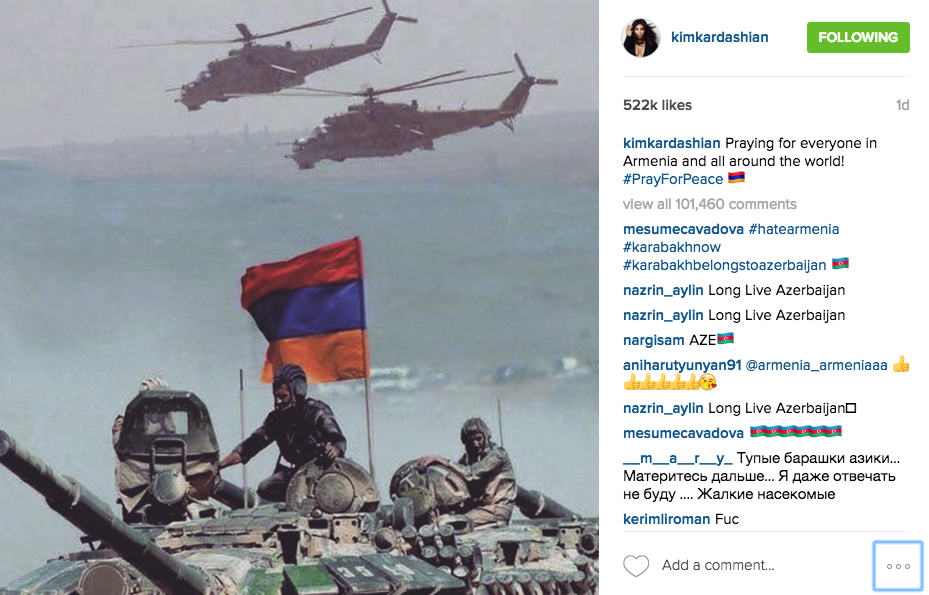 Kardashian, who is of Armenian descent and traveled to the Armenian capital of Yerevan last year with her husband, Kanye West, added the hashtag “#PrayForPeace” in an Instagram post that quickly generated more than 500,000 likes.

A publicist for Kardashian did not respond to a request for comment.

Nagorno-Karabakh, a landlocked region within Azerbaijan that is run by an ethnic Armenian majority, has been contested since the fall of the Soviet Union in 1991, but is experiencing some of its worst violence in decades. Armenian separatists receive financial and military support from the Armenian government, which has threatened to recognize the independence of Nagorno-Karabakh.

The fighting reportedly escalated on Friday when Azeri forces pushed past Armenian separatist lines in an apparent effort to recapture a strategic area within Nagorno-Karabakh. As of Wednesday, the governments of Azerbaijan and Armenia said they had halted hostilities, which have killed dozens of people though the exact casualty numbers have not been independently verified.

For years, the government of Azerbaijan has been fighting an uphill battle for influence in Washington against a well-organized and influential Armenian-American community highly critical of Baku and Turkey, Azerbaijan’s regional ally.

Suleymanov said he’s often frustrated by how the conflict is portrayed in the U.S. as a religious battle between Azerbaijan, a Muslim majority country, and Armenia, a Christian majority country. “These references are misleading because there is not a religious aspect of this conflict,” he said.

But Azerbaijan’s considerable oil wealth has also helped fuel its own PR efforts in Washington — a multi-million dollar campaign that often underscores Baku’s importance to the United States as an energy supplier, close friend to Israel, and able partner in the fight against terrorism while downplaying human rights concerns.

“We now have a long track record of being a strategic partner with the United States on a wide variety of topics,” said Suleymanov.

Despite Baku’s efforts, though, Armenia’s allies in Congress condemned Azerbaijan as soon as the violence broke out.

“I am deeply disturbed by and condemn this terrible new escalation in Azerbaijan’s aggression against Nagorno Karabakh in the form of a significant military assault,” said Rep. Adam Schiff (D-Calif.) in a statement on Saturday. “Until Azerbaijan faces strong and meaningful consequences over their policy of escalation and violence … there is little chance of resolving the conflict and avoiding further bloodshed.”

During the interview, Suleymanov chafed at the remarks of Schiff, whose district in California is home to an influential Armenian-American community.

“He’s beholden to his constituents,” Suleymanov said. “This is not the position of the United States. It is not based on any objective assessment.”

Hitting back, Schiff said it is the Azeris who are opposed to an objective assessment given their refusal to install cease-fire monitoring equipment near the most contested areas in Nagorno-Karabakh. “The answer, of course, is clear: the belligerent does not want to be confronted by the fact of its own belligerence,” Schiff told FP.

The Obama administration has avoided backing either side in the conflict — a position that previous administrations have also maintained. On Tuesday, State Department spokesman Mark Toner applauded both governments for accepting the ceasefire.

The U.S. is not “picking sides” in the conflict, said Toner. Instead, he added, Washington  supports multilateral efforts to “mediate a fair and just resolution to the Nagorno-Karabakh conflict.”