‘The Peshmerga Isn’t Afraid of ISIS’

Fighting on the front lines, Kurdish Peshmerga soldiers have joined the Iraqi Army in a bloody battle against the Islamic State. But sharing a common enemy doesn’t make them easy allies.

Photos and Story by Cengiz Yar 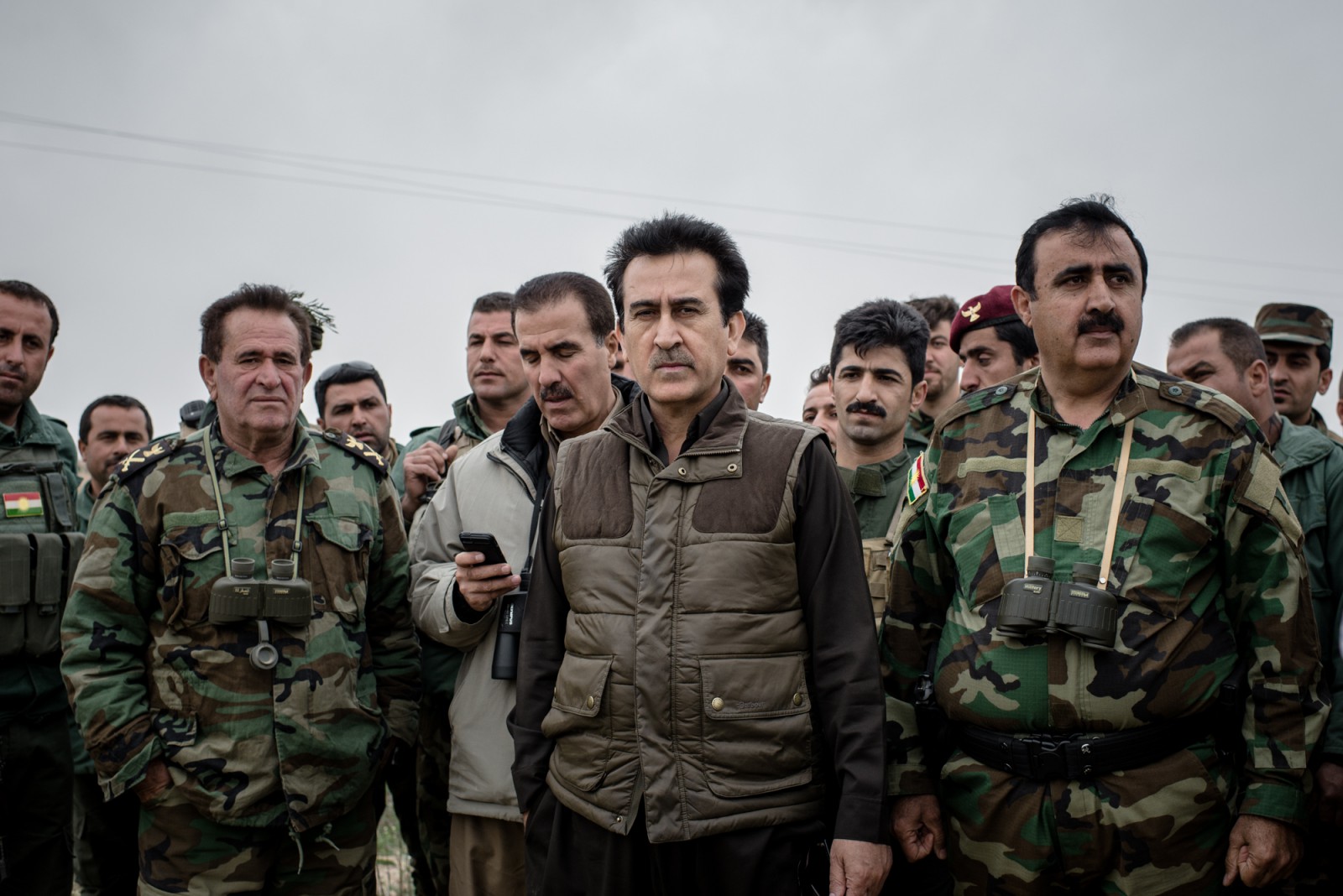 A Peshmerga commander (center) stands with his troops on the front line in Makhmour, Iraq.

MAKHMOUR, Iraq — Nonstop small-arms fire rattled across the grassy plains in this corner of northern Iraq. Ambulances raced down a dirt path away from the front lines, carrying wounded fighters. Reinforcements whizzed in the other direction. A large blast rocked the town of Nasr, roughly a mile from where I stood, and smoke flooded the air — either from an Islamic State suicide bomber or a coalition airstrike.

Here, Kurdish Peshmerga and Iraqi Army soldiers are trying to claw their way northwest to the Islamic State’s stronghold of Mosul, roughly 50 miles away. Nasr is no more than a couple dozen houses perched on a hill, but it is one of the first steps in Iraq’s recently announced operation to recapture Mosul, the country’s second-largest city.

The offensive, which was launched on March 24, is already displacing civilians and threatening to cause a humanitarian crisis. An estimated 20,000 people live in the territory between the front line and the Tigris River, toward which the Iraqi Army is slowly advancing. More than 2,000 people had already fled to Makhmour from Islamic State-controlled territory by March 25, according to aid workers. They were being held in a two-floor youth recreation center, as Kurdish Peshmerga officers suspect that there are Islamic State sleeper cells in the group and are questioning the men. Every inch of the building was packed full, and dirt and scraps of food were scattered throughout the throngs of people. A thick, rotten smell hung in the air. I saw several humanitarian groups offering boxes of food, sometimes leading to pushing and shoving — a moving human wall of misery. 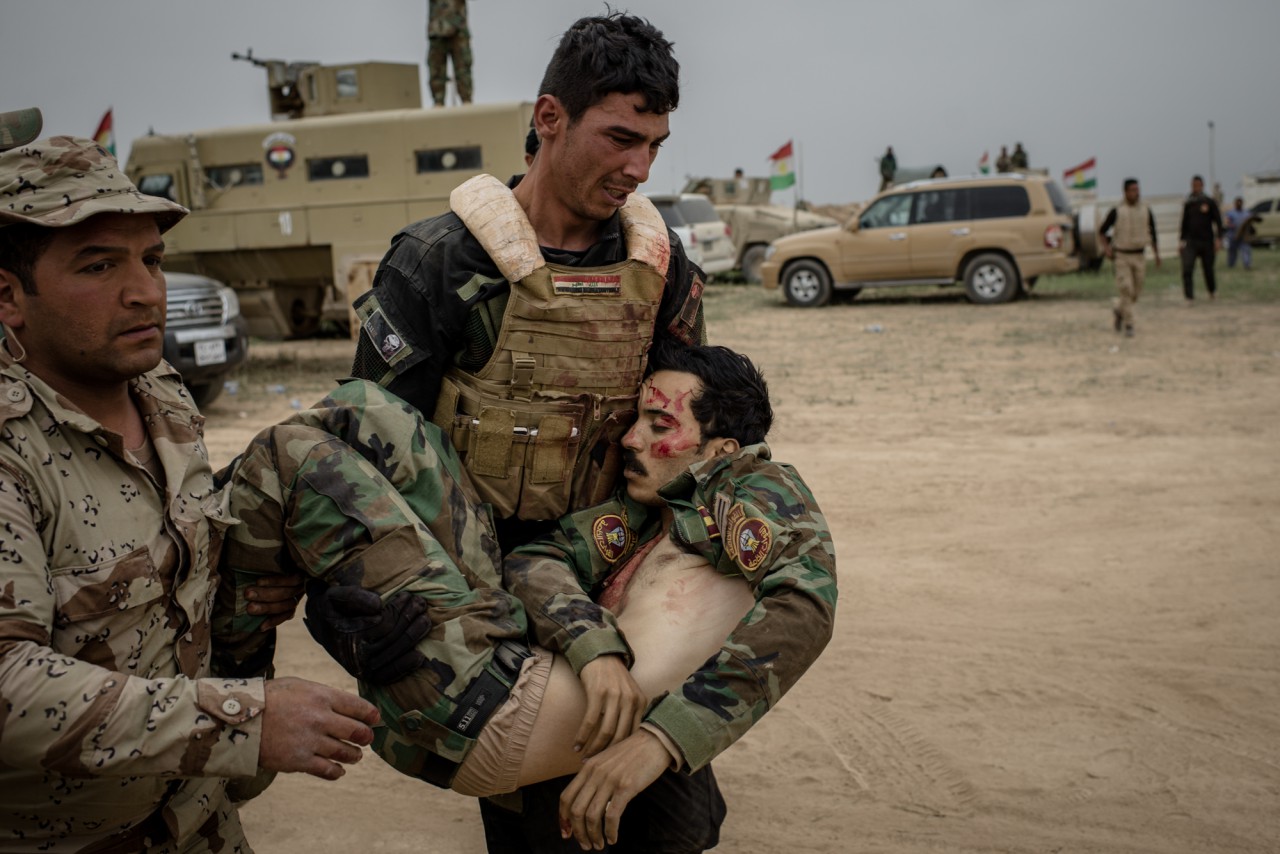 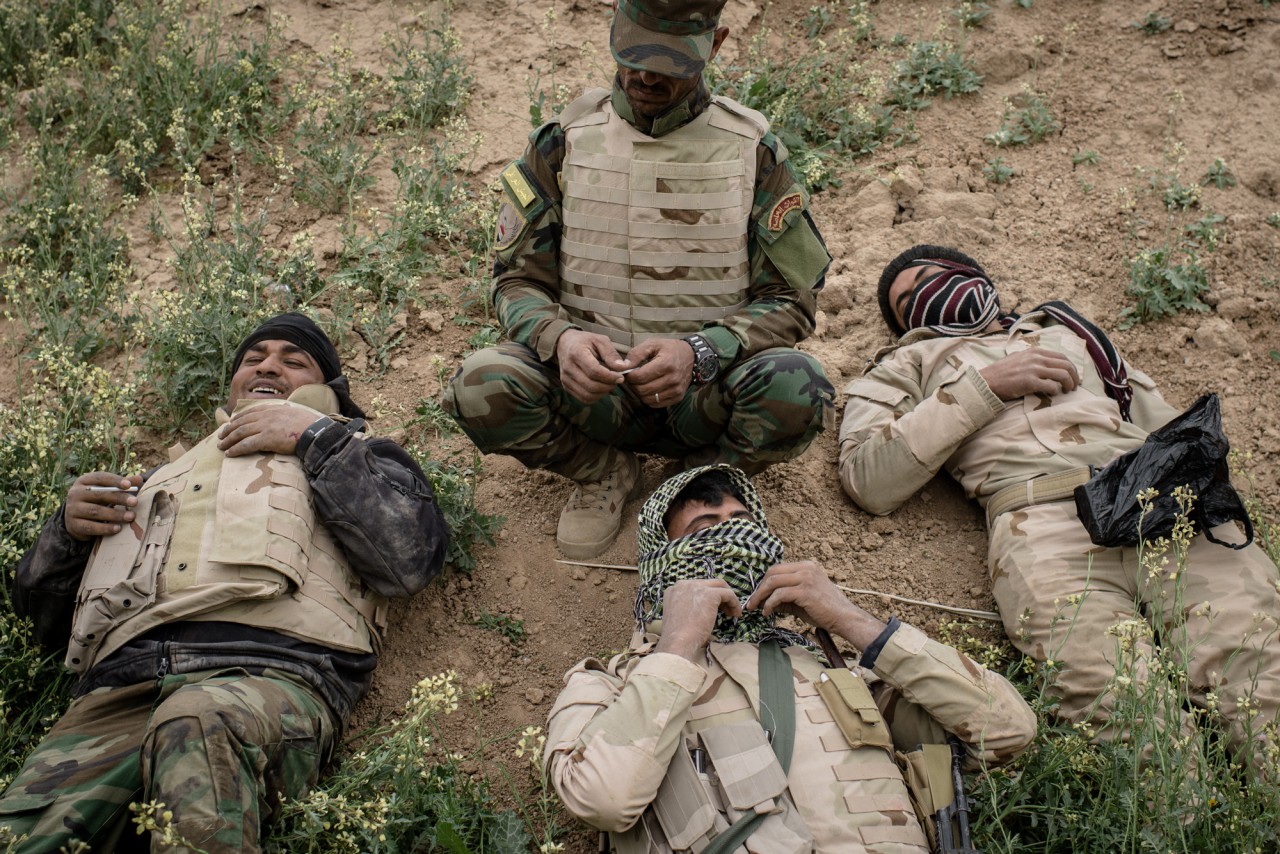 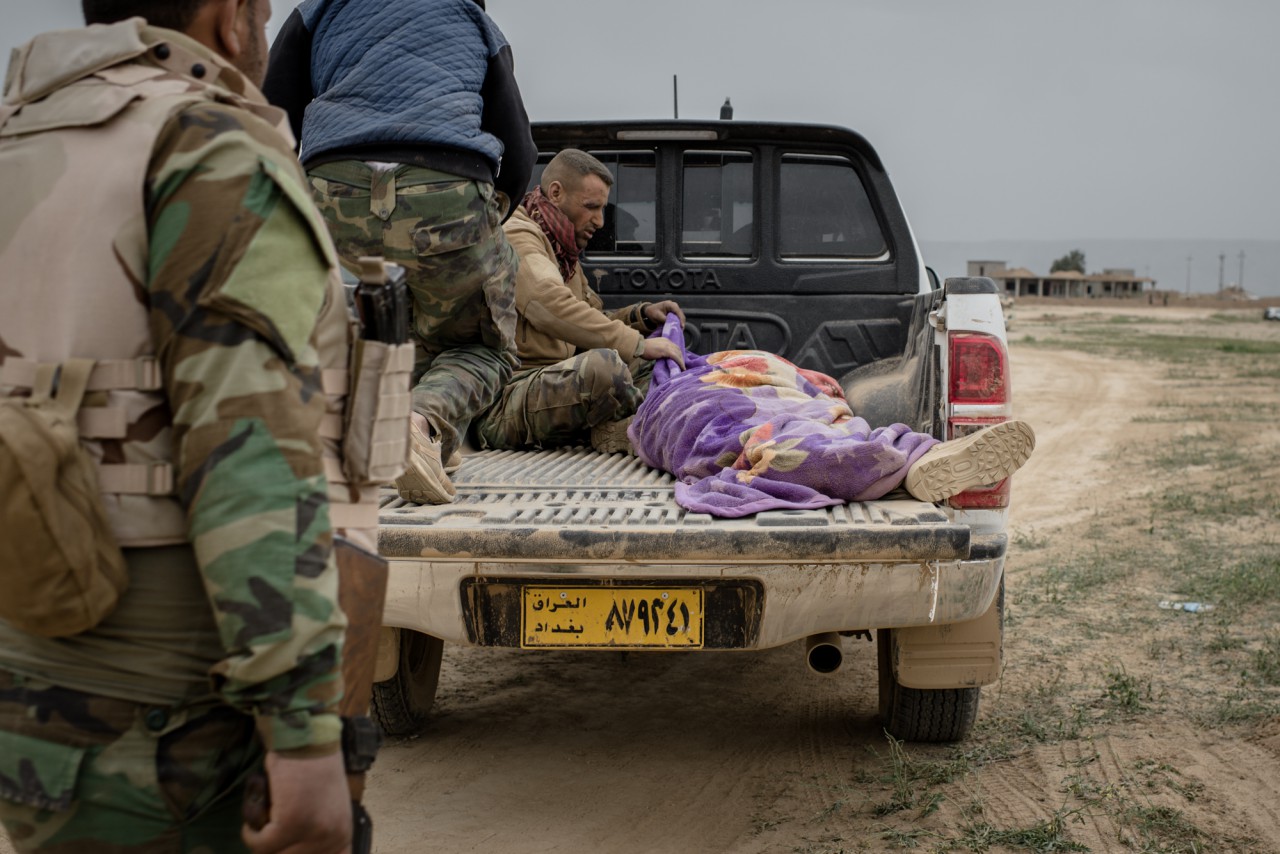 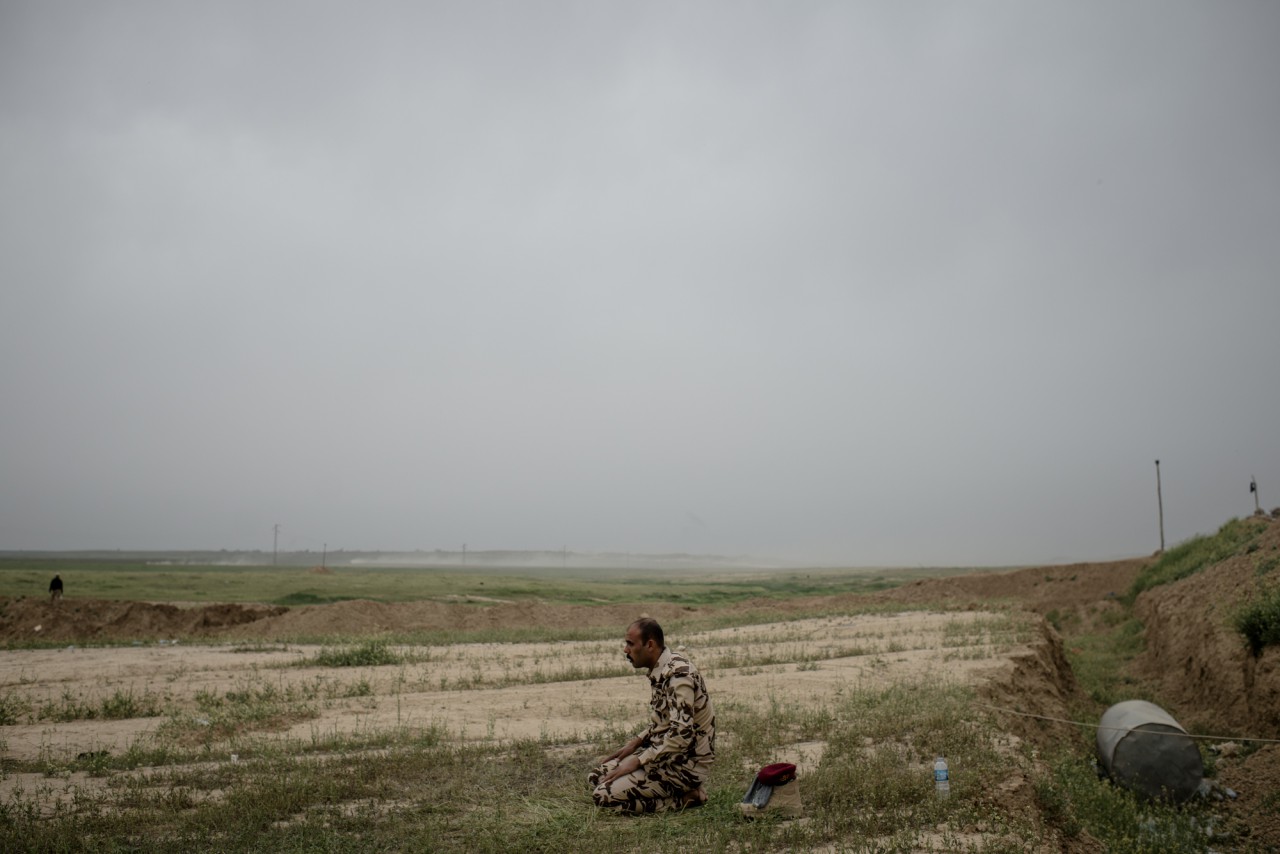 An Iraqi soldier carries the dead body of his brother, who was killed during a battle for the Islamic State-controlled village of Nasr.

Iraqi soldiers relax against an earthen berm on the front lines near Nasr.

A man covers the body of an Iraqi soldier killed near Nasr.

An Iraqi fighter says his late-afternoon prayers at the Nasr front line, as other troops blast the Islamic State with rockets and mortars.

Makhmour was taken for a few days by the Islamic State in August 2014, after the group’s capture of Mosul. The jihadis were pushed out shortly thereafter by Kurdish forces, but the group has remained on the borders of Makhmour until late last month. On March 31, the Iraqi Army and Sunni tribal fighters, backed by Kurdish Peshmerga and heavy coalition air support, captured several surrounding villages from Islamic State militants. The Iraqi Army remains in the driver’s seat in the effort to push closer to Mosul as the Peshmerga watch from close by, not entirely convinced of their nominal ally’s fighting ability.

The fight hasn’t been easy for the estimated 2,000 Iraqi Army soldiers here. Near the front line, a group of fighters gathered around a slender Iraqi Army soldier, who was weeping as he trudged through the dirt. His tactical vest was streaked with blood, and in his arms, he carried the dead body of his brother.

“What is this fight between Shia and Sunni?” he cried in anger, screaming into the chaos of the battle. “Why is Iraq doing this?”

A few minutes later, another pickup truck came back from the front. On the truck bed sat a man covered in dust, as if he’d been caught in a sandstorm. Beside him was another dead Iraqi Army soldier covered in a blanket. Tan military boots stuck out from under the blanket on the bed of the truck as it sped off toward Makhmour. A large group of Iraqi Army fighters in a convoy of pickup trucks and Humvees headed in the opposite direction, chanting a war hymn and waving their weapons in the air.

The Peshmerga, however, have watched the Iraqi Army’s slow progress with frustration. Barzan Abdal, a 25-year-old Peshmerga lieutenant who lives in Erbil, watched the convoy drive off from the front-line berm into the no-man’s land beyond. He viewed the inability of the Iraqi Army to take Nasr for three days as a sign of failure. “They’ve completely lost morale. That’s why they can’t fight,” he said, referring to the Iraqi Army soldiers who were his allies in this fight. 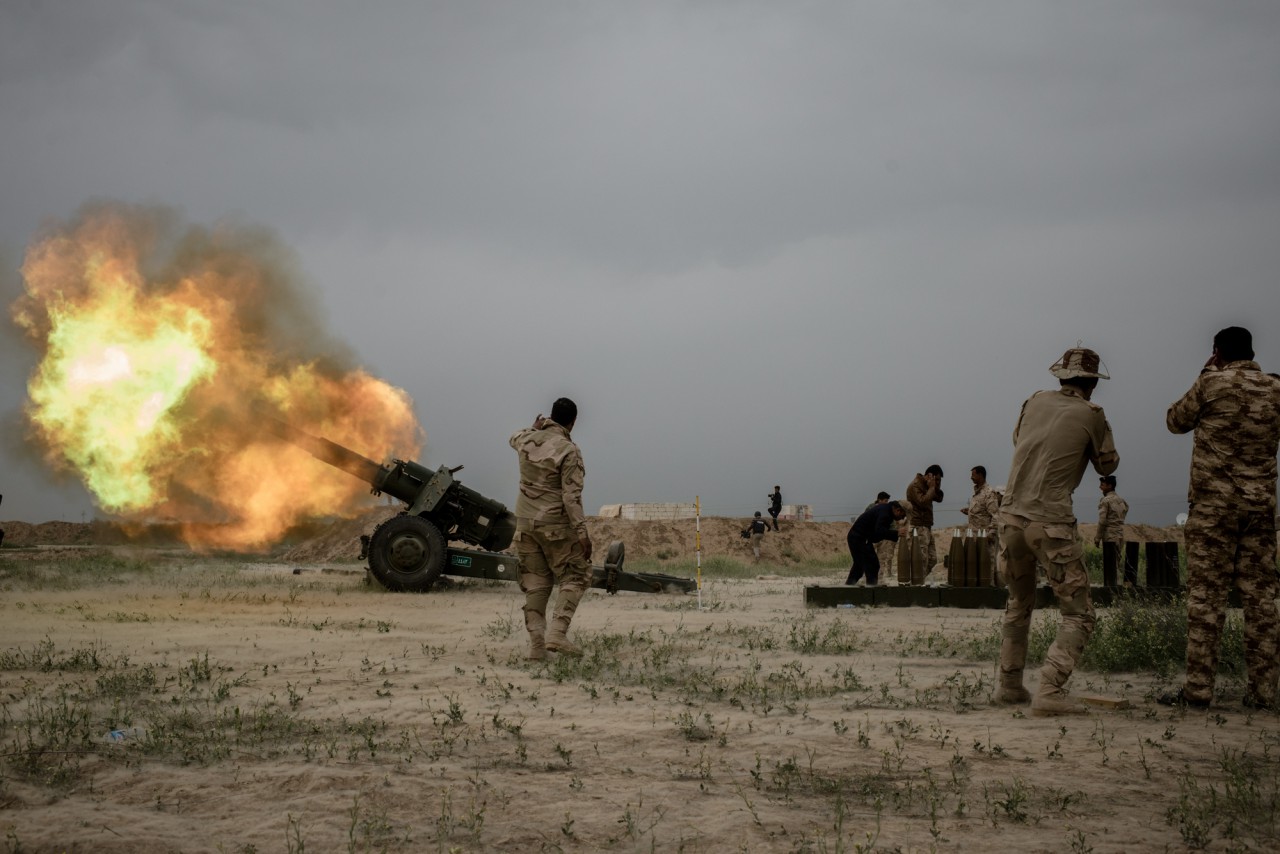 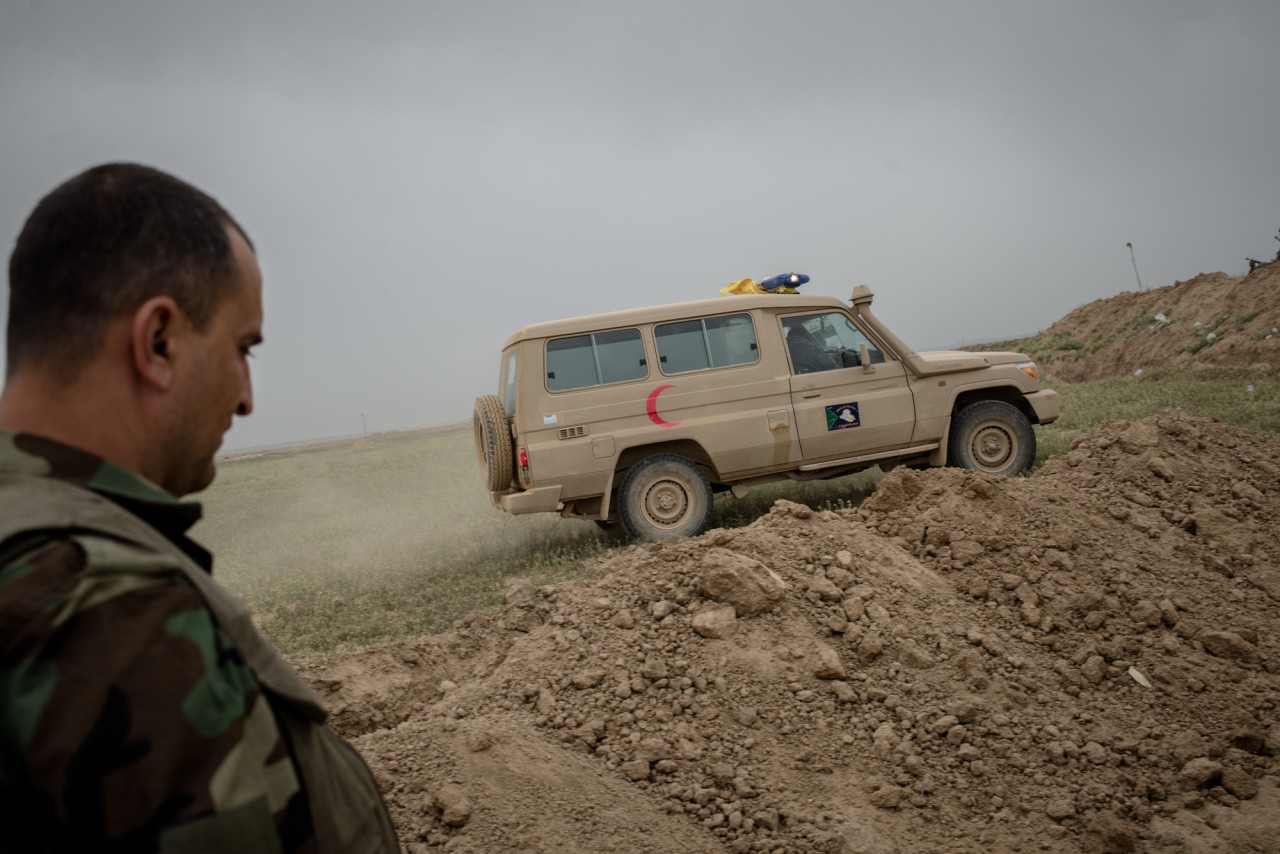 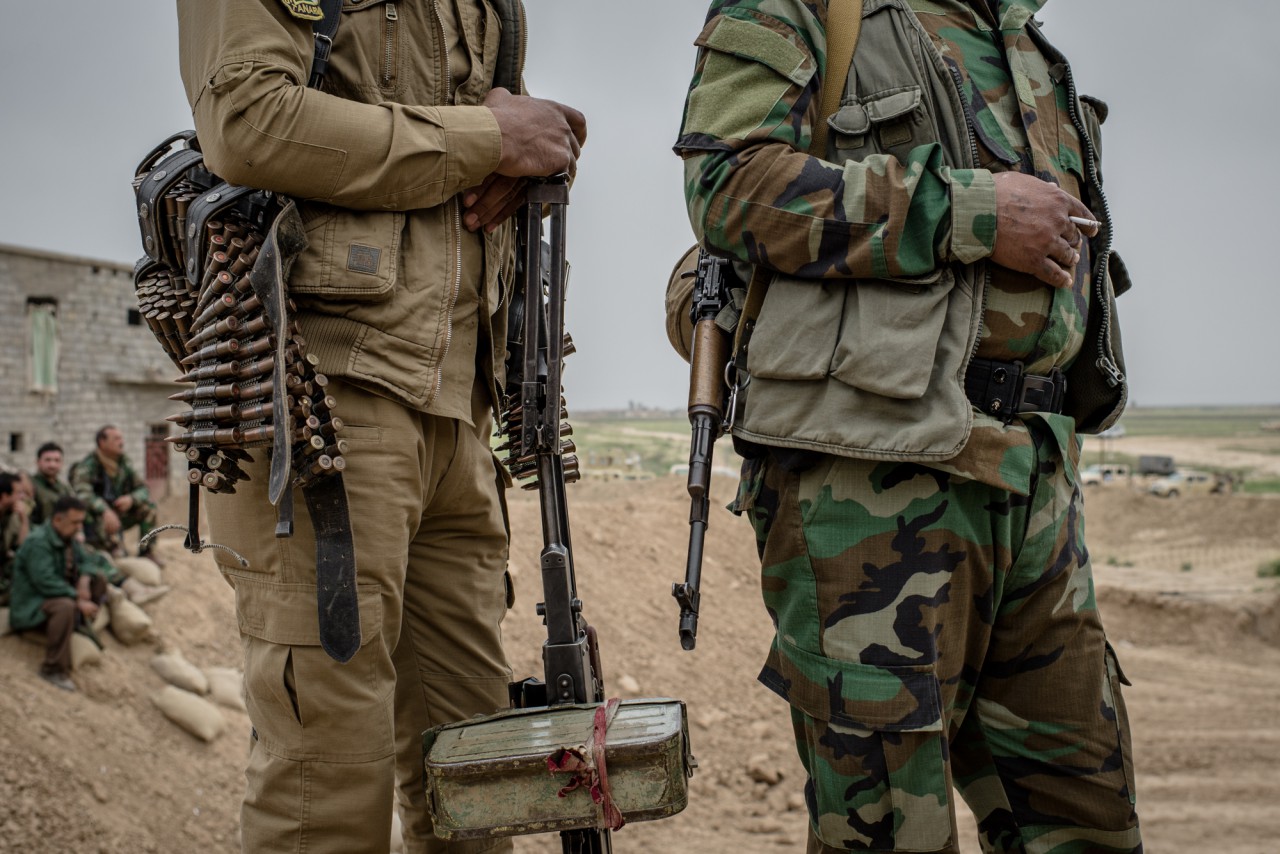 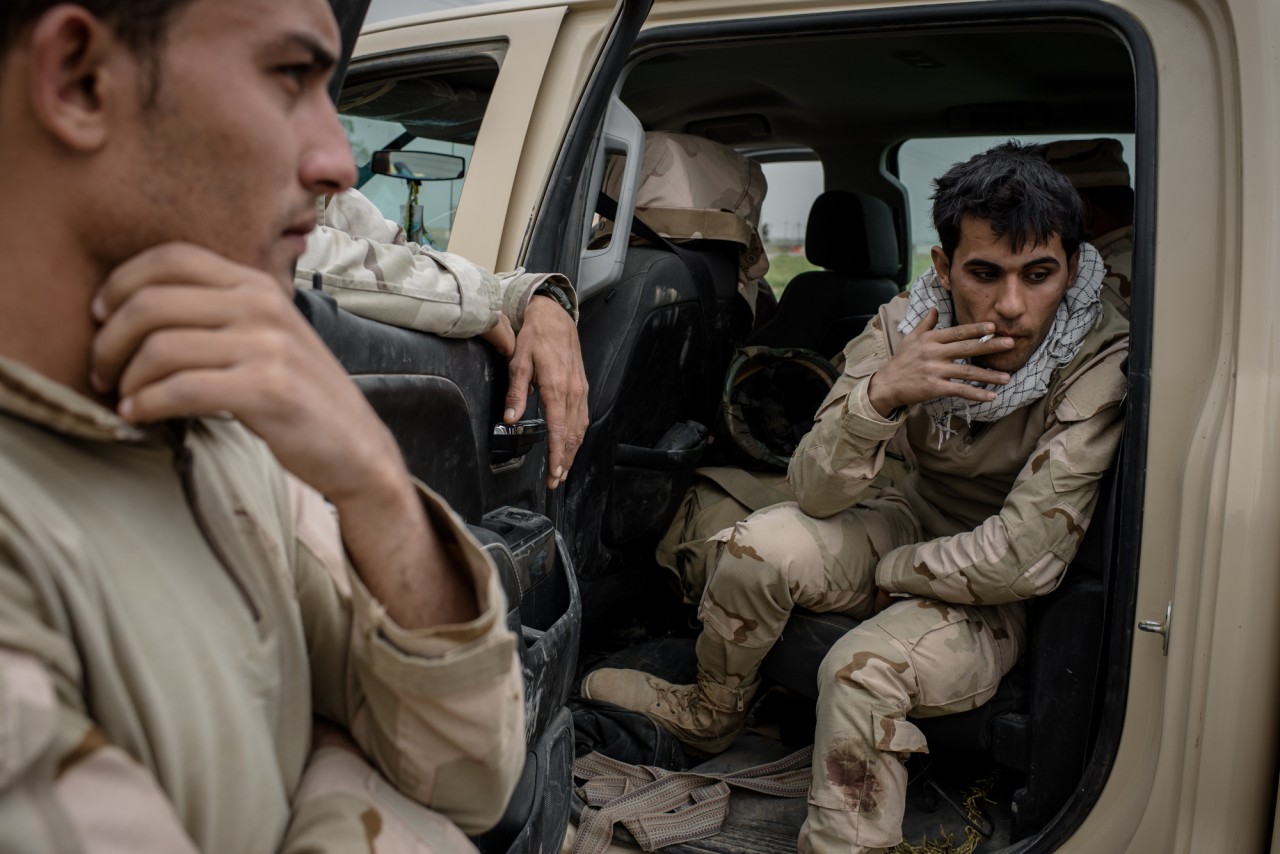 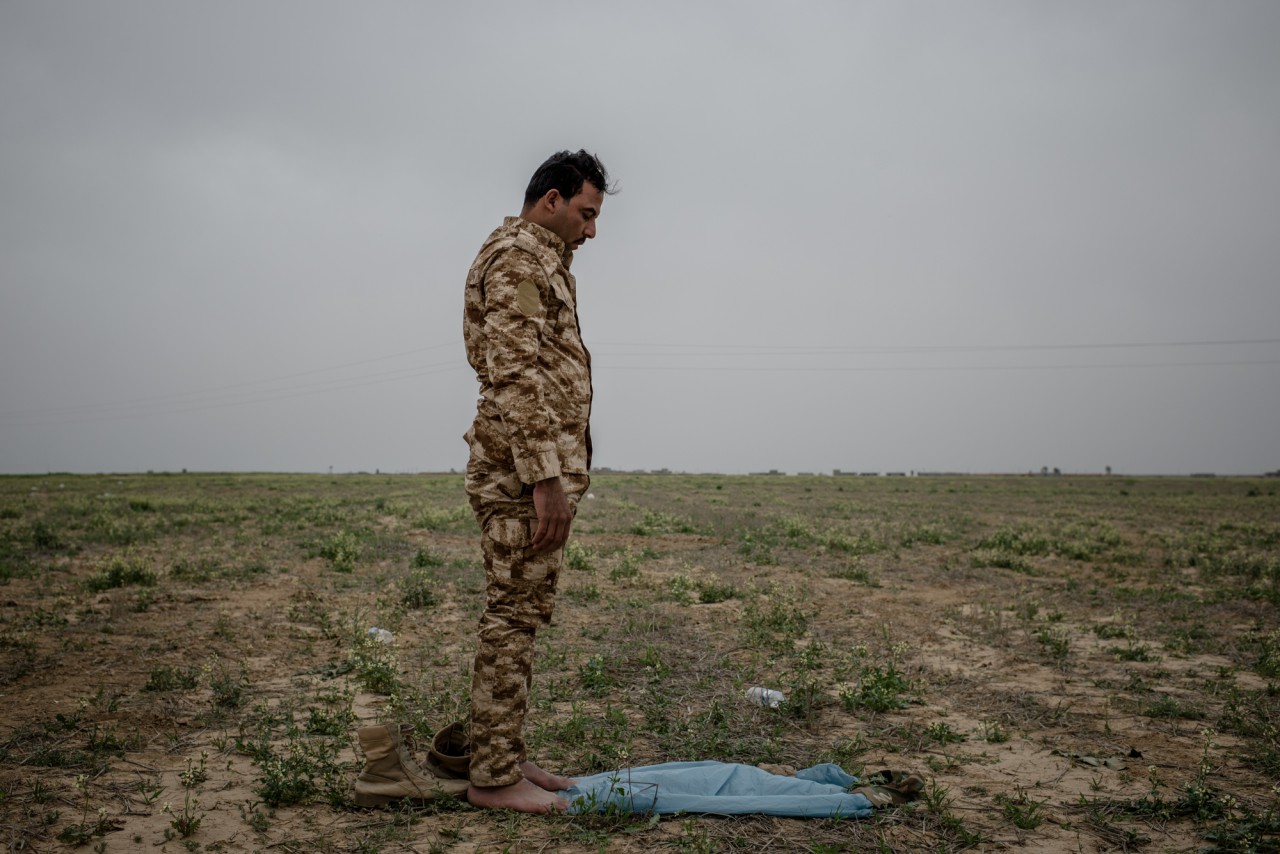 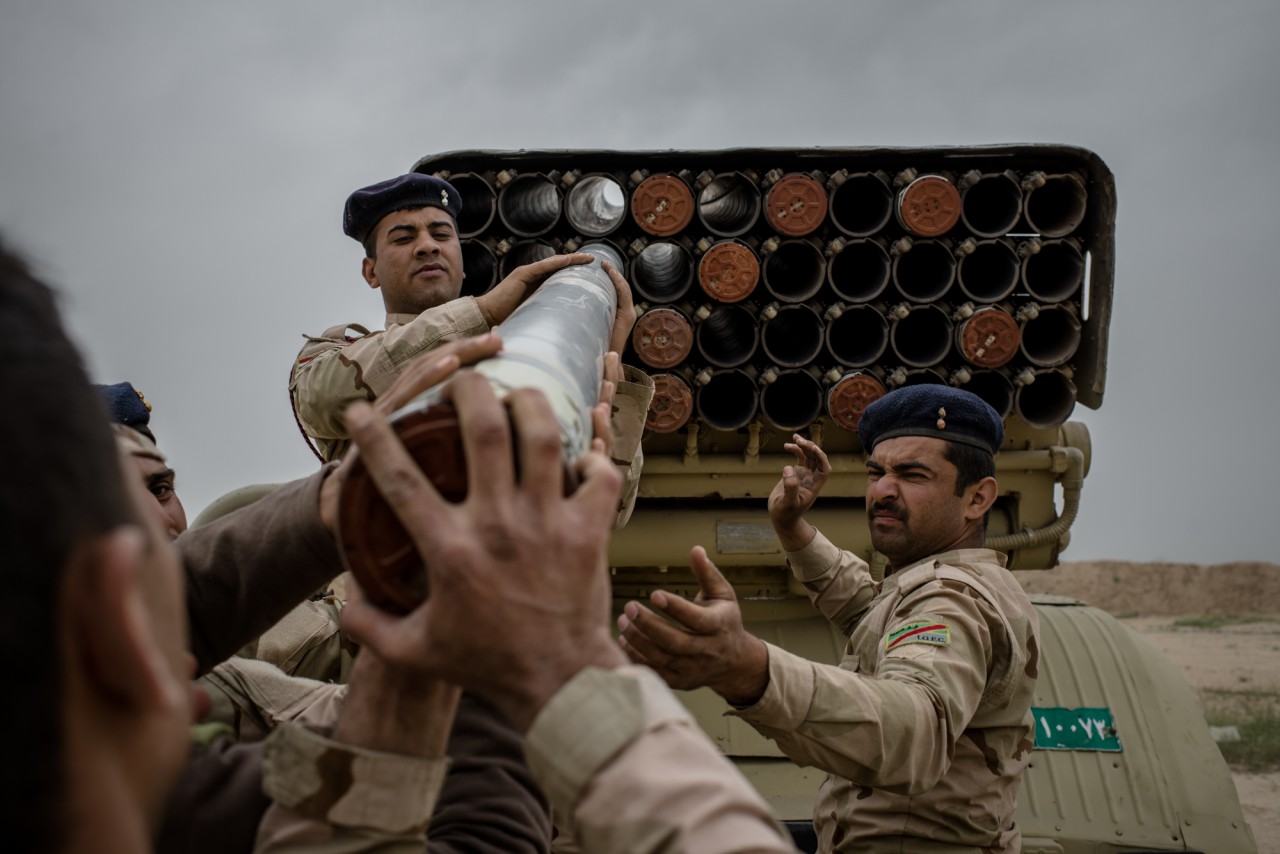 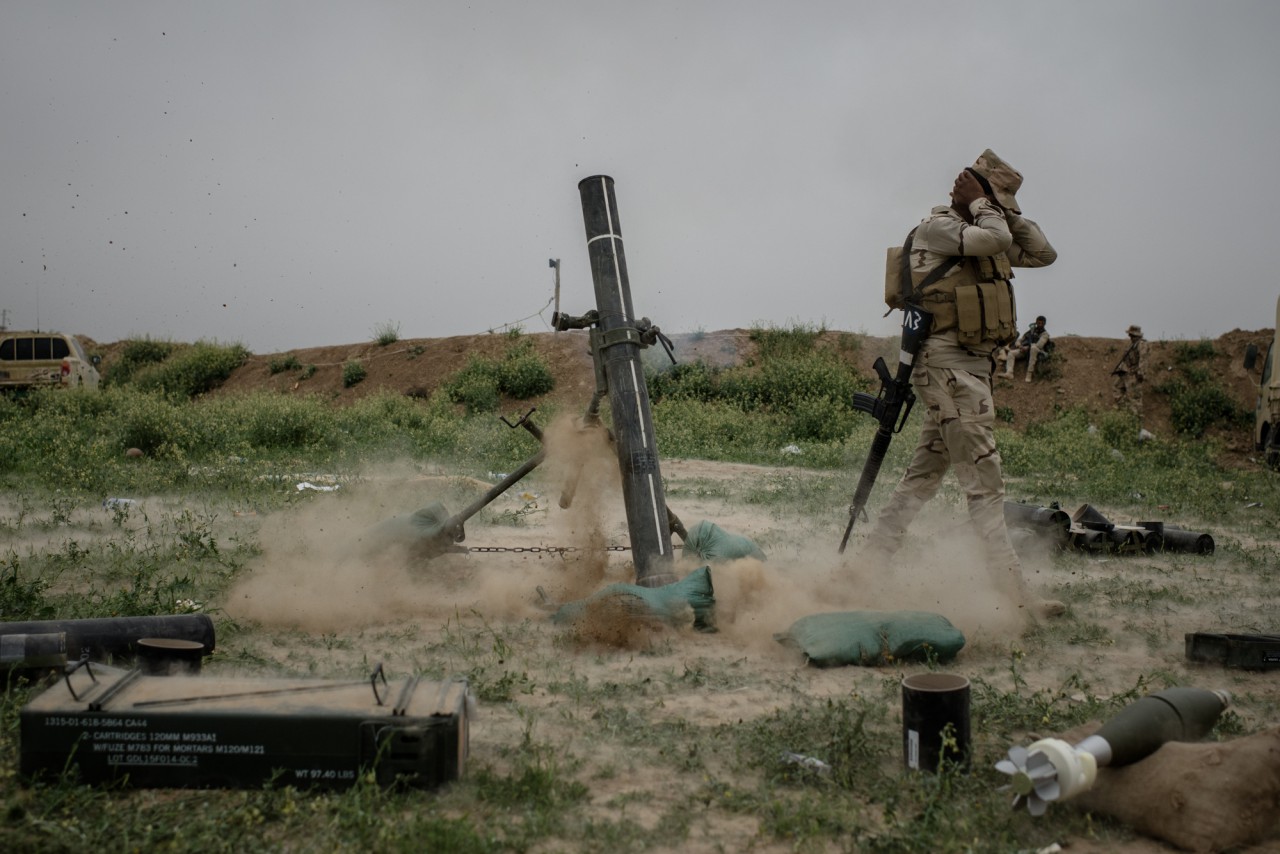 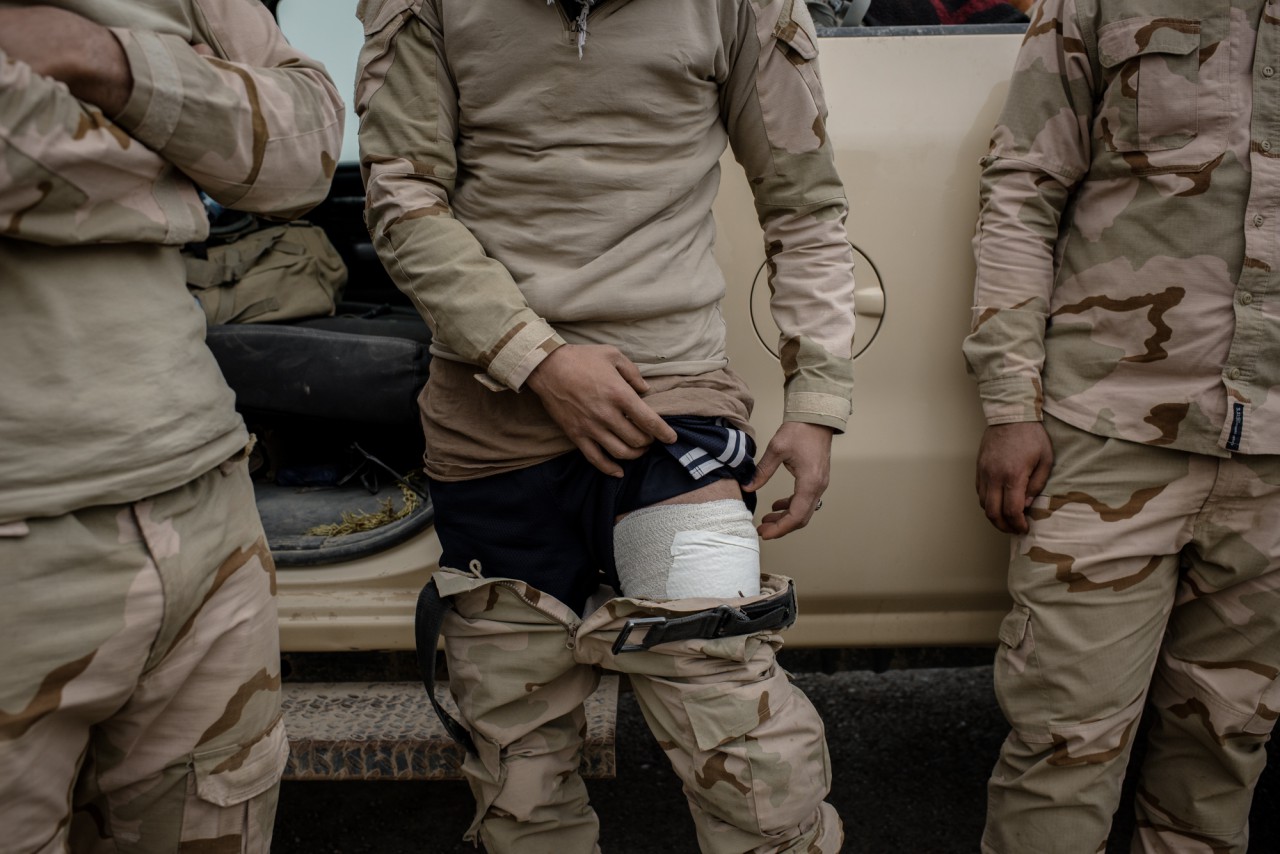 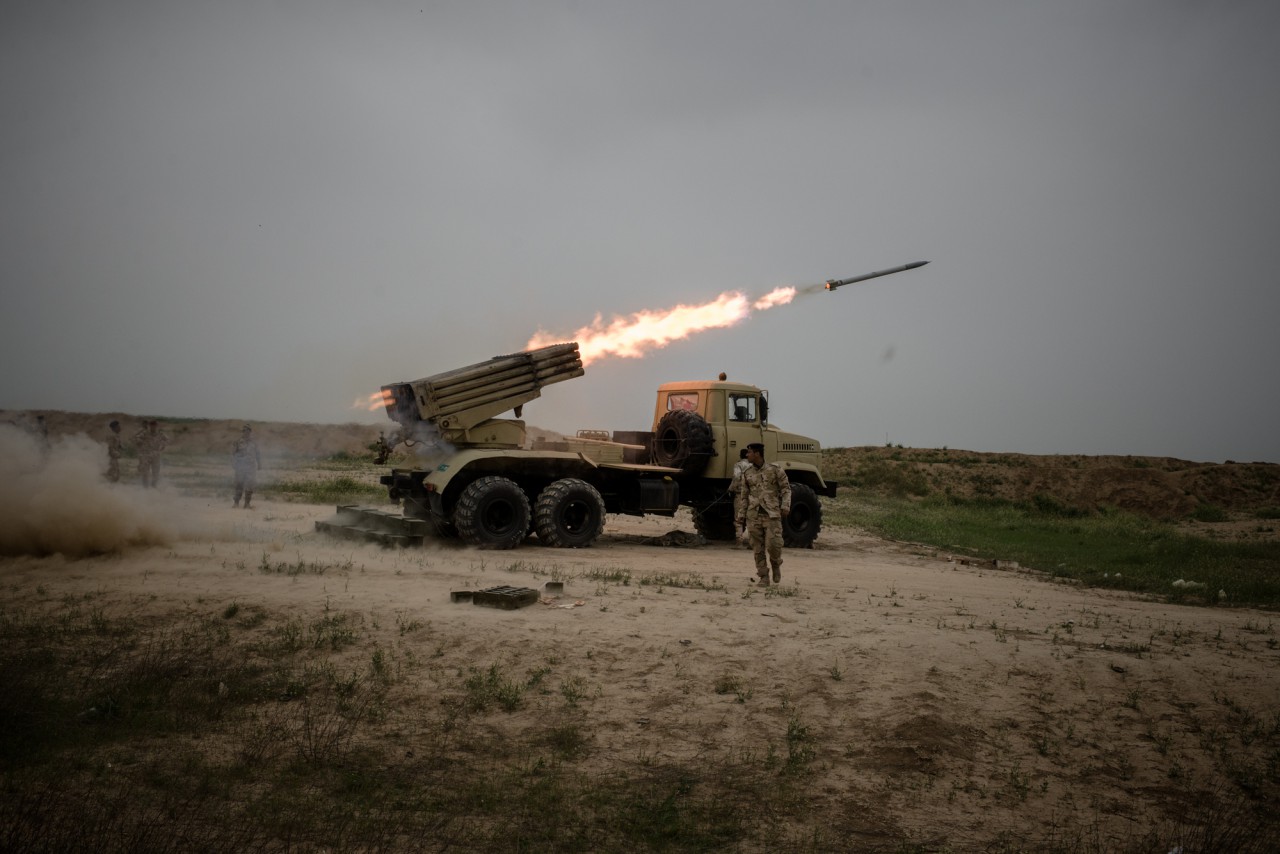 An ambulance races back to Makhmour with soldiers injured while fighting for Nasr.

Soldiers load munitions into a Katyusha rocket launcher near Makhmour.

An Iraqi fighter fires a mortar at the Islamic State’s defensive position in Nasr.

An Iraqi soldier returns to Makhmour with a bandaged thigh injury.

If the Peshmerga and the army here didn’t share a common enemy in the Islamic State, they would be rivals instead of allies. The two forces serve different governments, which each have competing agendas, and have a long history of mistrust between them. These divisions threaten to weaken the fight against the Islamic State: The Kurdish forces are openly skeptical about the military’s fighting capability, suggesting their presence was largely to beat back an Islamic State advance if the army retreats in disarray.

“I have zero confidence in the Iraqis,” said Juma Talib, a 38-year-old Peshmerga fighter from Erbil, who watched the fighting from the top of a command post at the front line. “For us, this is about reclaiming our land. For them, this is a religious war.”

But whether it’s Peshmerga or the Iraqi Army on the front lines, the Islamic State has employed ruthless tactics to keep their enemies at bay.

“There are families still in the villages, and anytime we get close, they use the civilians as human shields,” said Marwan, a 31-year-old Kurdish private with the 91st division of the Iraqi Army, who was stationed at an earthen berm protected by sandbags and cinderblock bunkers. His finger never strayed far from the trigger of his M16 rifle as he described the Islamic State’s use of suicide bombs and improvised explosive devices, which it has employed in the past to decimate Iraqi Army units.

Despite the difficulties of the fight, Marwan seemed determined to press forward. “This advance is very important, because they are using everything against us, and if we don’t stop them, they’ll come back and take Makhmour,” he said. 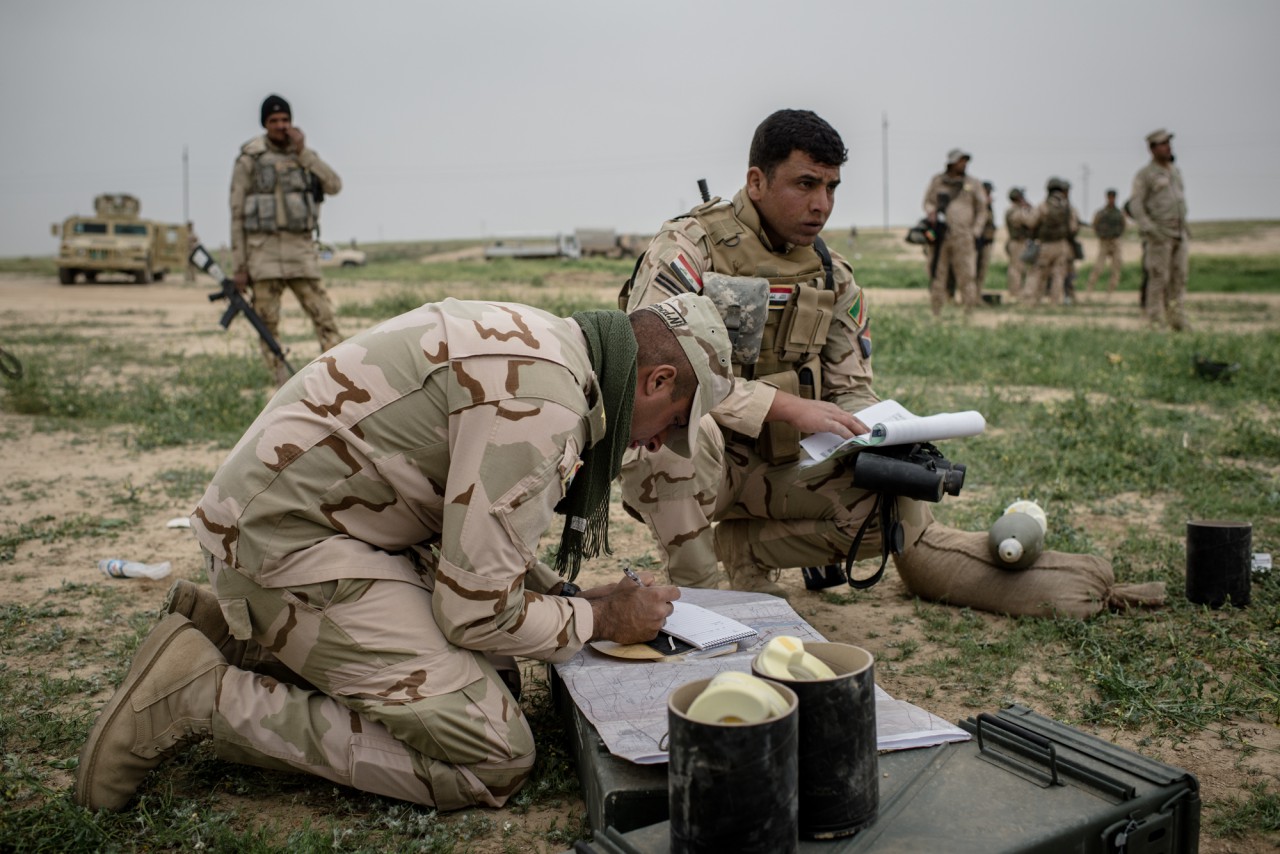 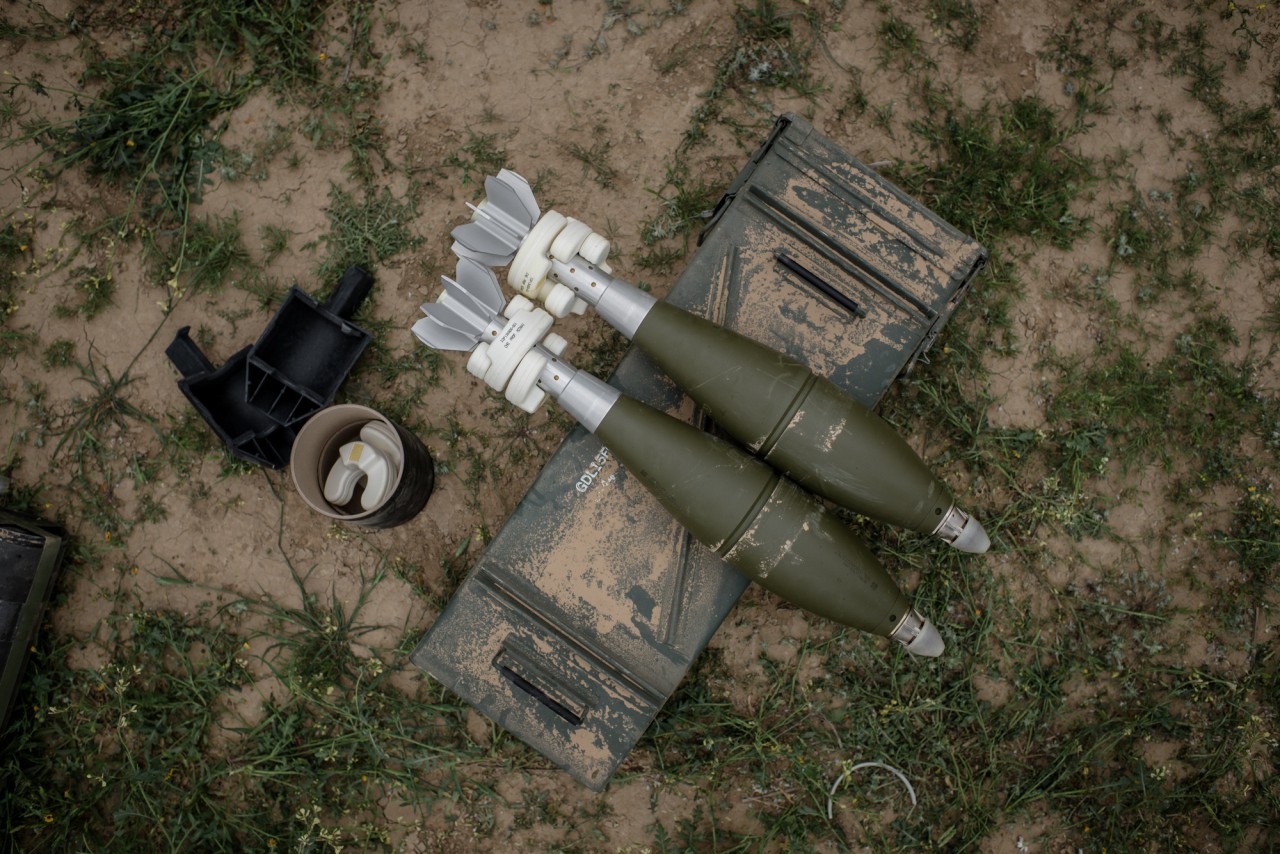 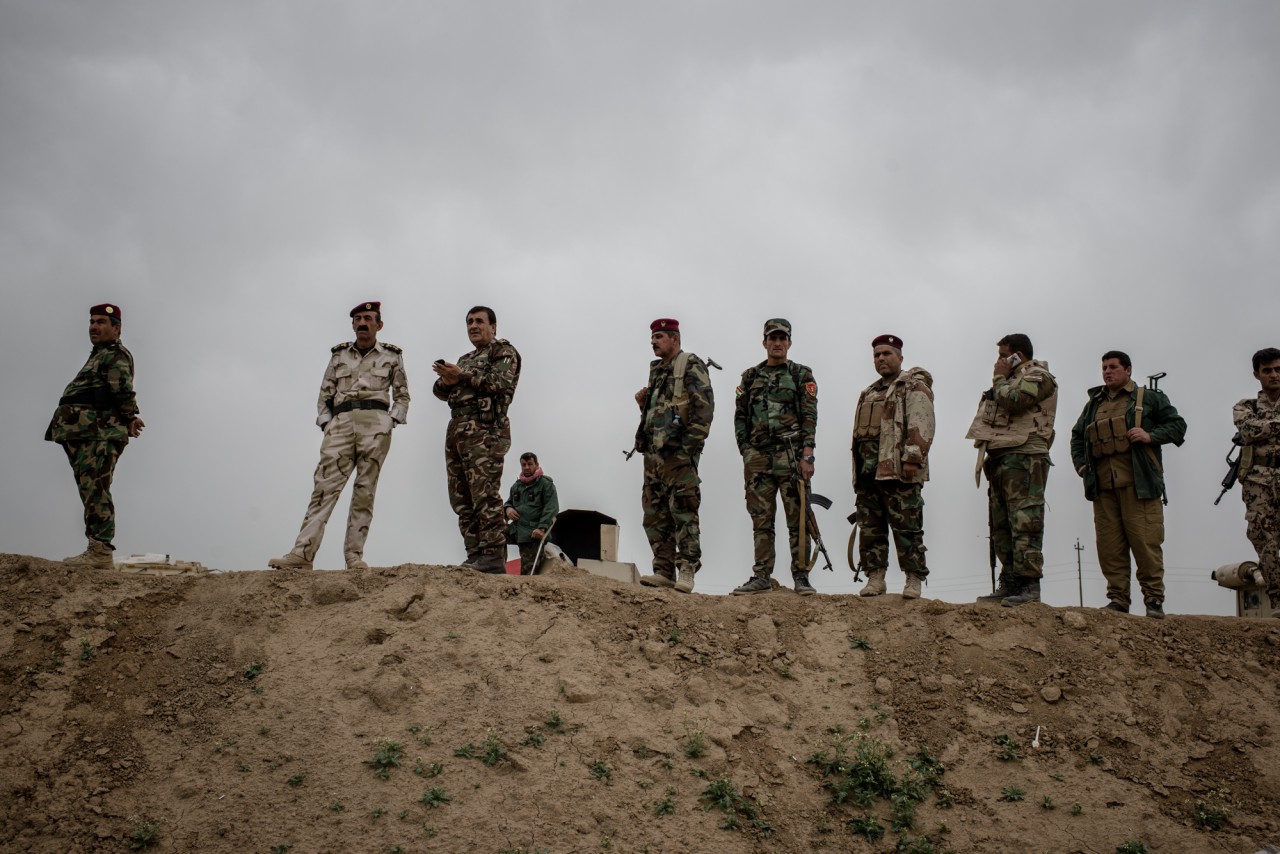 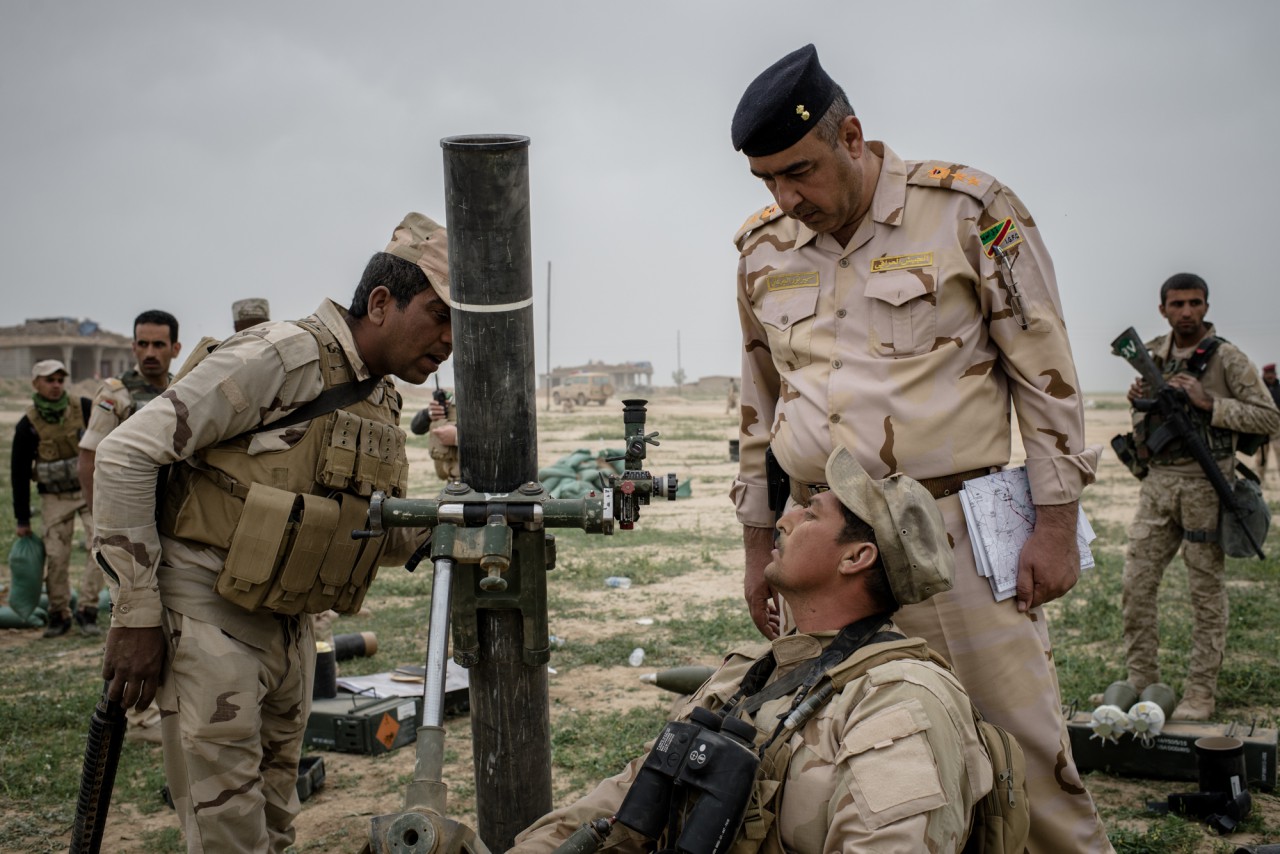 Iraqi soldiers map out their next mortar strike on Islamic State targets in Nasr.

Mortars are prepared at the front lines of the battle for Nasr.

A group of fighters stand atop an earthen berm near Makhmour.

Iraqi soldiers gauge their next mortar strike against the Islamic State in Nasr.

Nearby, I talked with a group of Peshmerga fighters who joked about the quality of my body armor, compared to their complete lack of protection. This was a common complaint: Peshmerga fighters say the weaponry and equipment provided to them by coalition forces pales in comparison to the heavy support provided to the Iraqi Army. The majority of the Kurdish forces are equipped with hand-me-down Kalashnikovs; very few, if any, fighters have body armor; and heavy weaponry is almost nonexistent.

Abdullah Aziz, a tall, dark-haired, 42-year-old Kurd, smiled lightly as he tapped his tactical vest to show the lack of ceramic plates or any protection.

But despite the Iraqi Army’s better equipment, Aziz didn’t have much faith in them. “We’re here because we’re scared that the Iraqi Army will collapse, and we’re here to stop that from happening,” he said. “The Peshmerga isn’t afraid of ISIS. It takes them [the Iraqi Army] six days to take two villages. We could take six villages in two hours.”

Cengiz Yar is a documentary photographer and freelance photojournalist based between Chicago and Iraq.