On Feb. 28, the cargo freighter Jin Teng, flying the flag of Sierra Leone, arrived in the Philippines. It was using what’s known as a “flag of convenience” — to subvert regulations or fees, shipping companies often register vessels in foreign states. In this case, the device was meant to obscure the fact that the Jin Teng was, in fact, a ship hailing from North Korea, a country recently in hot water for testing nuclear devices and conventional missiles. The ruse was undone days later when the boat’s name turned up on a U.N. Security Council list sanctioning 31 North Korean vessels. About a week after, another North Korean ship, the Theresa Begonia, was detained at a different Philippine port, flying the flag of Tuvalu.

The two boats were the first to be held after the latest wave of U.N. sanctions, but Pyongyang has a long history of skirting international law. For decades, merchant ships have helped the isolated state generate much-needed hard currency through the illegal trafficking of drugs, arms, and counterfeit currency. In 2003, for instance, a former North Korean missile scientist told the U.S. Senate that a single ferry transported most of the parts needed for Kim Jong-il’s rogue missile program. The country also relies on its fleet of more than 200 known merchant vessels to transport oil from Russia, livestock from Sudan, and palm oil from Malaysia. It is buoyant trade with China that most busies the fleet, but that could become idle if North Korea’s chief ally follows through on an early April promise to ban crucial imports and exports. 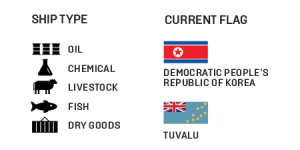 U.N. sanctions exclude oil imports; Pyongyang’s 17 known vessels collect much of the country’s crude from Russia, the Middle East, and South Asia. But the country still manages to flout the law. In March 2014, Libya’s navy chased a North Korean tanker out of the port of Sidra, where it had loaded $24 million worth of illicit oil purchased from armed separatists.

North Korea’s three known livestock carriers travel abroad for months at a time. Meanwhile, the country’s fishing vessels troll the waters around the Korean Peninsula. In the last three months of 2015, more than a dozen small North Korean fishing vessels washed ashore in Japan—filled with corpses. Whether they were unlucky fisherman or defectors, as some have surmised, remains uncertain.

North Korea’s cargo ships transport every­thing from food to AK47s. But they also carry tons of illicit gold, as well as coal exports worth about $1 billion each year, the U.S. Treasury estimates.

Note: The data shown above are not comprehensive of each ship’s movement over a 180-day period. Sources: Thomson Reuters, Vesseltracker, and Seaweb

A version of this article originally appears in the May/June 2016 issue of  FP magazine.

is an American journalist based in Tokyo, Japan. His writing has appeared in the New Yorker, the New York Times, the Atavist Magazine, and other publications.