Chinese Is Not a Backward Language

Critics who say it's unfit for the PC or the iPad are peddling a rebooted version of Orientalism.

Even in the age of China’s social media boom, with billion-dollar valuations for Beijing-based IT start-ups, prejudice against the Chinese language is alive and well. One would be forgiven for thinking that by 2016, the 20th century’s widespread critiques of racism, colonialism, and Social Darwinism would have sounded the death knell of 19th-century Orientalism, which viewed China and the Chinese language through a condescending, colonialist lens. At the least, one might hope that if notions of Chinese Otherness were still with us, those who carry on the tradition of these threadbare ideas would generally be seen as archaically Eurocentric and gauche — the dross of airport bookshop paperbacks, unworthy of serious engagement. If only. Nineteenth-century understandings of China persist, not only surviving the decline of Social Darwinism and race science, but flourishing in this new century, driven primarily by arguments about China’s unfitness for modern technology and media.

In a recent article for the New Yorker, award-winning science fiction author Ted Chiang speculates on an alternate reality in which China possesses an alphabetic or syllabic writing system, like most other societies on earth. Until then, he argues, China’s script, and its supposed resistance to the keyboard and the keypad, will pose an obstacle to wider literacy and form “a millstone around Chinese culture’s neck” — an intriguing claim when nationwide literacy in China is upward of 95 percent and when China has long since adopted and augmented the QWERTY keyboard to input Chinese characters rapidly and efficiently on computers.

Chiang’s not alone in trying to use Chinese information technologies as a way to critique Chinese writing; one Chinese typewriter recently appeared at the Museum of the History of Science in Oxford in a special exhibit tellingly titled “Eccentricity: Unexpected Objects and Irregular Behavior.” Elsewhere, one can find online exchanges in which readers are assured that Chinese computing is a “piece of cake,” provided users adhere closely to “600 steps.”

There’s no reason to question the personal thoughts or motives behind these critiques. But it’s fair to say that modern appeals to the “inefficiency” of Chinese — especially those couched in seemingly neutral descriptions of literacy, typewriters, and computers — are neither neutral nor innocuous. To the contrary, Orientalism 2.0 rehabilitates, rejuvenates, and indeed fortifies old-school Orientalist discourses, making it possible to offer sweeping condemnations of Chinese script without relying upon gauche, bloodstained references to Western cultural superiority or the “fitness” of Chinese script in a Social Darwinist sense. Now, Orientalist 1.0 arguments can be made even more forcefully using the sanitized, neutral, and supposedly objective vocabulary of comparative technological fitness. Chinese might be “equal” to all other languages in a cultural sense — but in a technological sense, it remains “backward.”

To understand how Orientalism 2.0 came into being, we need to revisit briefly the rise and supposed fall of Orientalism 1.0.

In his The Philosophy of History, 18th and 19th century philosopher Georg Wilhelm Friedrich Hegel famously wrote that Chinese writing “is at the outset a great hindrance to the development of the sciences.” He argued that the structure of Chinese grammar rendered certain concepts unavailable — ineffable and perhaps even unimaginable — to those who thought and spoke in Chinese. He asserted that people were possessed by language, and that Chinese people had the misfortune of being possessed by one incompatible with modern thought.

Hegel’s views were par for the course in an intellectual world dominated by Social Darwinist thought. Alongside ideas of human racial hierarchy, Europeans categorized human language in a pecking order of progress-versus-backwardness, with the Indo-European language family at the apex, and other languages — particularly those that lacked declension, conjugation, and, above all, alphabetic script — regarded as developmentally disabled. As linguist, missionary, and Sinologist Samuel Wells William observed, “Chinese, Mexican, and Egyptian were alike morphographic; sometimes called ideographic.” Among these, “Mexican” was barbarously destroyed by Western invaders, and Egyptian ultimately yielded to phoneticization. China alone tenaciously held on to this dying system of writing, “upheld by its literature; strengthened by its isolation; and honored by its people and their neighbors who had no written language.” What ensued was a “mental isolation caused by the language,” one that “has attached them to their literature, developed their conceit; given them self reliance, induced contempt of other nations, hindered their progress.”

Chinese was long a preferred target of linguistic Darwinism. “The Chinese language,” a 1912 tract reported, “is the most horrible that any sane man can be called upon to acquire. … The Chinese language must go.” W.A. Mason echoed these thoughts in his 1920 tract, A History of the Art of Writing. “[P]honetic characters in-the-making, like the Chinese,” Mason wrote, have been “long since arrested in the development of its written characters at an early stage.” A 1932 report phrased it more bluntly: “The writing of Chinese in the Chinese manner is, as a proposition, simply ‘too bad.’”

During the heyday of Orientalism 1.0, Orientalism 2.0 was born — and began to go mainstream. At its inception, it trafficked in much of the same racially coded — if not overtly racist — imagery as its predecessor, yet its ultimate focus was distinct: Orientalism 2.0 criticized Chinese by emphasizing the technological impracticalities and failings of Chinese writing. In January 1900, a cartoon appeared in the pages of the San Francisco Examiner that sought to show Chinese script “incompatible” with the typewriter, as well as with other modern information technologies. Reported to occupy the back room of a newspaper office on Dupont Street, this (purely mythological) Chinese typewriter boasted a 12-foot keyboard complete with 5,000 keys. “Two rooms knocked into one apartment afford shelter for this remarkable contrivance,” the author explained, describing a machine so large that the “typist” was something akin to a general commanding forces over a vast terrain. An accompanying cartoon showed the caricatured inventor perched atop a stool, shouting Cantonese-esque gibberish at “four muscular key-thumpers through a large tin megaphone.”

In 1903, a name was at last given to the imaginary inventor of this apocryphal machine. Photographer and columnist Louis John Stellman christened the inventor “Tap-Key,” a deft pun that played upon faux Cantonese and onomatopoeia. “I see by one of the papers that a Chinaman has invented a typewriter which writes in the Celestial language,” Stellman wrote, his description augmented by a drawing of yet another absurdly large contrivance. No fewer than five Chinese operators clacked away simultaneously at this massive keyboard, whilst five more fed immense sheets of paper through a platen of industrial proportions. (Evidently, the number of personnel needed to operate a Chinese typewriter had doubled since the machine first debuted three years earlier.)

Over the course of the 20th century, however, evolutionist arguments against Chinese fell steadily into dubious standing. In 1936, American sinologist Herrlee Glessner Creel published “On the Nature of Chinese Ideography,” an essay in which he mounted a painstaking critique of the widely shared belief that Chinese script constituted an orthographic half-breed caught between the presumed origins of all written language — pictography — and their presumed destiny of full phoneticization. Inspired by the broader critique of comparative civilization and race science, Creel took direct aim at authors who believed in the supremacy of the alphabet, and the related idea that the grammar of Chinese rendered certain forms of thought — particularly those forms deemed critical to modernity — ineffable.

Such criticisms have largely won the day. Linguist Geoffrey Sampson’s 1985 book Writing Systems extensively refuted the notion of Chinese insufficiency. In 1987, anthropologist Jack Goody also began to backpedal from some of his previous arguments about Chinese, writing, “We certainly gave greater weight than we should to the ‘uniqueness of the West’ in terms of communication, a failing in which we were not alone.”

But while evolutionist views of Chinese have retreated to the margins, quasi-technological arguments have continued, providing ample space for the tired trope of Chinese linguistic inferiority. In one form or another, the imagined Chinese monstrosity that first appeared in 1900 has continued to stalk popular imaginations well into the 21st century. Even The Simpsons entered the fray in 2001. In his new job writing copy for a fortune cookie manufacturer, protagonist Homer Simpson is shown extemporizing terse jewels of wisdom to his daughter, Lisa, who is taking dictation on a Chinese typewriter. He pauses for a moment to confirm she is keeping up. “Are you getting all this, Lisa?” The frame switches to his daughter, postured tentatively in front of the absurdly complex machine, pressing buttons with great caution. “I don’t knowwww,” she responds. 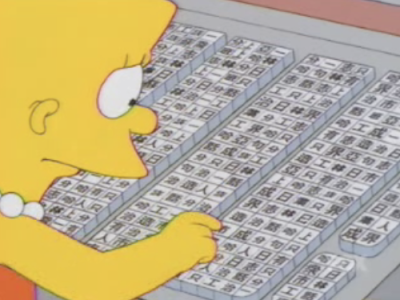 By conjuring up farcical and absurdist images of monstrous Chinese typewriters — or the “inefficiency” of Chinese in terms of telegraphy, literacy, computing, and more — this new way of criticizing China’s language has inoculated itself against claims of politically incorrect evolutionism, instead recasting itself in the sanitized and supposedly objective language of technological fitness. It’s a neat trick: Perhaps Chinese speakers were able to express themselves as completely as those of Western languages in a cognitive sense — suggesting Hegel’s cognition-focused criticism of Chinese as a “hindrance” to scientific development was wrong. Yet technologically, speakers and writers of Chinese were demonstrably stymied by their onerous script, one that obstructed the adoption of modern information technologies such as telegraphy, typewriting, and computing — and so, the argument concludes, Hegel was right all along.

The great irony of Orientalism 2.0 is that Chinese characters are not only going strong in the 21st century — they are one of the fastest, most widespread, and successful languages of the digital age. Not only was China home to arguably the first widespread implementation of “predictive text” technologies, but China today is an IT giant in which Chinese characters have evidently failed to prevent a social media boom, the growth of a smart phone industry so robust that it has begun to set its sights globally, and even the rise of peculiar new social media-cum-movie-theater hybrids in which patron-generated Chinese text messages are projected on-screen as part of the movie-viewing experience. For better and for worse, none of these outcomes, it turns out, depended upon China going the route of wholesale alphabetization.

No matter the evidence, though, the Orientalism of old still rears its ugly head. Perhaps instead of repackaging these timeworn arguments in a shiny new technological exterior, we should take the time to learn how Chinese typewriters, telegraph codes, computers — and indeed Chinese characters — actually work.