Russia’s whipping out the biggest nuclear missile the world has ever seen and laying it on the table. Should we feel inferior -- or scared?

Let’s face it: Missiles are penises. You don’t have to be Diana Russell to admit it. You can pretend they are rockets all you want, but all I can think about is Robin Williams in Death To Smoochy. Sure, you can’t make a missile shaped like a vagina. But that’s the point. No one gets this excited about tanks. When the Committee on the Present Danger campaigned against the SALT II nuclear reduction treaty, they printed posters that showed the Soviet Union’s big, dark missiles set against our tiny little white ones. How’s that for Fear of a Black Planet?

The Soviet Union may be gone, but don’t tell that to Vladimir Putin. The Russian supremo is comically virile, the sort of guy who is willing to interrupt a meeting with George W. Bush to let him know that Barney, as presidential pets go, is sort of emasculating. It should go without saying that Putin’s Russia is also really into big missiles.

Let’s face it: Missiles are penises. You don’t have to be Diana Russell to admit it. You can pretend they are rockets all you want, but all I can think about is Robin Williams in Death To Smoochy. Sure, you can’t make a missile shaped like a vagina. But that’s the point. No one gets this excited about tanks. When the Committee on the Present Danger campaigned against the SALT II nuclear reduction treaty, they printed posters that showed the Soviet Union’s big, dark missiles set against our tiny little white ones. How’s that for Fear of a Black Planet?

The Soviet Union may be gone, but don’t tell that to Vladimir Putin. The Russian supremo is comically virile, the sort of guy who is willing to interrupt a meeting with George W. Bush to let him know that Barney, as presidential pets go, is sort of emasculating. It should go without saying that Putin’s Russia is also really into big missiles.

Exhibit A: Last week, a Russian “news” outlet ran a profile on Russia’s newest ICBM under development, known as RS-28. While Russian officials have been discussing the missile for several years, the coverage was still rather eye-popping. Although the news story did not involve explicit images or details, it was clear that the Russian state would like you to know that the RS-28 is larger. Very, very large. Like, much larger than the missile it replaces. And much larger than anything in the American arsenal.

According to the Russian press, the missile is far more powerful than the missile it will replace. In the United States, we call this older missile the SS-18 Satan (it’s the “demon rod” smack dab in the middle ­of the Committee on the Present Danger’s “penis poster.”) The new RS-28 is supposed to be bigger still. According to Russian officials, the RS-28 will have 10 tons of so-called throw-weight — the missile’s payload — much of which will be in the form of nuclear weapons. And the RS-28, again say the Russians, will be powerful enough to send these warheads to the United States over the South Pole, avoiding any pesky U.S. missile defenses — not a trivial factor given Moscow’s howling about new U.S. missile defenses in Poland and Romania. 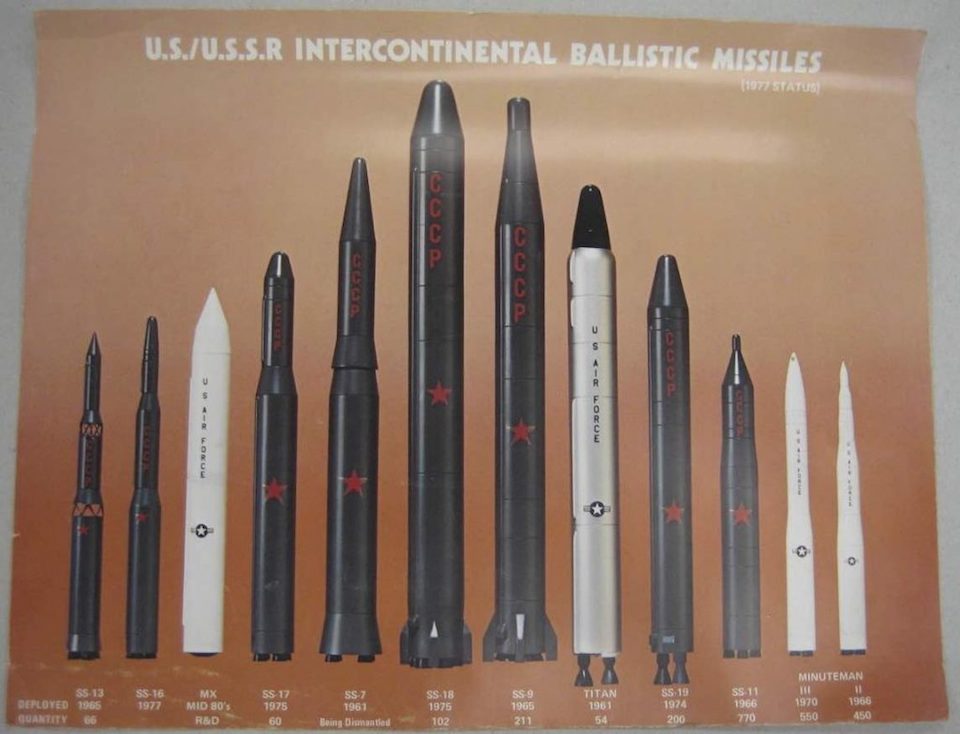 And, in case you still can’t appreciate the humungousness of this missile, the Russian press has helpfully explained that the large number of high-yield warheads it carries could “destroy an area the size of Texas.” Say it in your best Yakov Smirnov voice: Texas is famous big state. Russian missile can destroy Texas. Russian missile is big.

Is any of this true?

Well, Russia can plainly build a giant missile. And the South Pole business isn’t out of the question. The Soviets were really interested in what are called “fractional orbital bombardment systems,” or FOBs, during the Cold War. There was a treaty that would have banned FOBs — the very same treaty that prompted the Committee on the Present Danger to publish the “penis poster.” As it happened, the U.S. Senate ultimately refused to ratify the treaty. And so, this idea is still around. A recent RAND study, for example, contains a description of the advantages and disadvantages of a FOBs-like approach for a new U.S. intercontinental ballistic missile (ICBM).

And what of the Texas-killer Russian warheads? The SS-18 can carry 10 warheads, each with a yield of 750 kilotons. That’s plenty to reduce most of the Lone Star state to a post-apocalyptic wasteland, although I am not sure I would be able to see the difference. (Kidding, Texans, kidding! Please don’t shoot me!)

Of course, it isn’t clear that the new RS-28 will be big or potent as advertised. The other day, Putin toured a facility that makes military vehicles. When he tried to open the door to one of the trucks, it jammed. When an aide tried with a bit more force, the handle fell off. Things in Russia aren’t always what they seem.

So, while the RS-28 probably does represent an improvement to an existing Russian missile, it still replaces a comparable system. And that means the RS-28 isn’t a change in Russian nuclear posture, it’s a continuation. Russia has long placed a substantial fraction of its warheads on so-called heavy ICBMs. The RS-28 indicates that we shouldn’t expect that to change.

The love of heavy ICBMs is a Russian thing. Heavy ICBMs, particularly liquid-fueled ones like the RS-28, have advantages and disadvantages. Such a missile might be able to carry a large number of nuclear warheads, but it must be based in an underground silo. That makes all those warheads sitting in one spot an attractive target. Liquid fuel, too, is not easy to handle. And keeping the missiles on constant alert can be tricky, something that Bill Clinton learned when he was governor of Arkansas. There is no support in the United States Air Force for revisiting liquid-fueled missiles.

The Russian Strategic Rocket Forces, however, feel differently. To them, heavy ICBMs are Viagra mixed with vodka. The Russians want to keep a lot of nuclear warheads, and its gets very expensive building a missile for each and every warhead. Even when Russia was flush with oil revenue, there wasn’t enough money to fully replace Soviet systems. As a result, the Russians have built a smaller number of modern missiles and packed them with as many warheads as possible. The United States has taken the opposite approach — spreading warheads across a much larger number of missiles on land and at sea.

Most American analysts, including myself, think the Russians are crazy for putting so many eggs, so to speak, in so few baskets. It’s highly destabilizing, too. Consider the problem at hand: If one missile can destroy 10 targets, the Russians have an incentive to use nuclear weapons first. And if the U.S. president can protect those 10 targets by blowing up just one missile, then it gives Washington a further incentive to use nuclear weapons first. Multiple warheads favor the side that shoots first, which is the very definition of instability. That’s the view in the United States at least. In Moscow, I would probably be laughed out of the room as the kind of guy who has a tiny … dog.

So while the RS-28 is not, in itself, a dramatic change in the threat to the United States, it does represent a very dangerous Russian habit. It would be better if we could persuade the Russians not to do this.

Actually, we did, once. Back in the good old days, the Clinton administration persuaded Boris Yeltsin to agree to a nuclear arms control treaty called START II, which prohibited Russia and the United States from placing multiple warheads on land-based ballistic missiles. But START II was doomed. The Clinton people wanted Russia to hurry up and ratify START II so we could start to negotiate a third round of reductions, which would be called START III. The Russians, on the other hand, complained that they didn’t want to build a bunch of single-warhead missiles under one agreement just to eliminate them under another. Amazingly, the two sides couldn’t figure this out.

Ultimately the Duma ratified START II under the encouragement of Russia’s young, energetic president-elect: Vladimir Putin. But it did so with a series of poison pills that, in fact, killed the treaty. None of the arms control treaties we have negotiated since, either under Bush or President Barack Obama, prohibit Russia from putting multiple warheads on its missiles.

But they should. If the two sides are serious about arms control, eliminating multiple warheads on land-based ballistic missiles is a must. Unfortunately, as Russian statements make clear, their affection for large numbers of warheads is driven in part by a desire to overwhelm U.S. missile defenses — not only the ones we have now (which, truth be told, don’t threaten Russia), but the ones they are afraid we might build. Unfortunately, this puts us at an impasse: The conventional wisdom is that the United States Senate would never ratify a treaty that contained limitations on missile defense.

The Russians may have a weird Freudian thing going on with their giant missiles, but we do too. It is easy enough to notice, if you just look. Andrew Exum, now the deputy assistant secretary of defense for Middle East policy, saw it when he watched a video touting the need for U.S. missile defenses a few years ago, before he entered government. “The long-dormant literary critic in me has been watching this unintentionally hilarious Heritage video on missile defense and counting the number of phallic symbols,” he wrote. “Let’s see … missile, missile, missile launch, Maggie Thatcher, missile launch, missile, missile …”

The simple fact is, unpopular though it may be, there is a relationship in the ongoing Washington-Moscow arms race between offense and defense — between the sort of missiles being developed by both sides and the defenses being deployed to counter them. If we care about reducing the danger of nuclear war, we have to find a way to limit the most destabilizing nuclear weapons. And that means being able to talk honestly about all our strategic systems, including missile defense. If the RS-28 is just a giant phallus to Vladimir Putin, it’s the rest of us who are going to get screwed.

NEW FOR SUBSCRIBERS: Want to read more on this topic or region? Click + to receive email alerts when new stories are published on Military, United States, Russia