‘The Shrapnel Finds Us Wherever We Hide’

Sudan’s Janjaweed are back. Only this time they’re better armed.

NUBA MOUNTAINS, Sudan — “They surrounded us, killed kids and women, burnt the village. We waited until nightfall, and then we escaped to the mountains,” said Kawthar Ali Adelan, who sought refuge from a March offensive by Sudanese armed forces in a remote mountain cave. “We can’t go to get water because we still hear the shelling and see the planes flying around.”

The 25-year-old mother was wedged in a rock crevice with her cooking materials laid out before her. “The shrapnel finds us wherever we hide,” she said.

Assaults like the one on Adelan’s village, Alazrak, coupled with near-daily air bombardment by President Omar al-Bashir’s forces are the new normal in Sudan’s Nuba Mountains. For five years now, the government has sought to defeat the rebel fighters who once fought alongside South Sudanese secessionists and now demand greater autonomy in their remote border region. Neither side has been able to gain the upper hand on the battlefield, resulting in a brutal, grinding conflict in which the rebel’s civilian communities are the ultimate victims.

The frontlines of this war have remained remarkably static since it broke out in 2011: Little has changed save for the body count, which has ticked steadily higher. But as Bashir’s government has fallen on increasingly tough economic times — the result of dwindling oil revenues and expensive wars not just in Nuba, but in the Darfur and Blue Nile regions as well — it has started to look for ways to cut military costs. To that end, it has repackaged the notorious Janjaweed militia from Darfur and dispatched it to the Nuba Mountains as a cheaper alternative to conventional troops. This Rapid Support Force (RSF), as it is now called, is under the direct control of Sudan’s National Intelligence and Security Service and thought to be leading operations against the rebels.

This year, the annual offensive that typically accompanies the beginning of the dry season — when vehicles can once again maneuver over the region’s swampy terrain — came several months later than expected. When it finally got underway, Sudanese forces were flanked by an unusually large number of heavily armed RSF forces, which are less accountable for the civilian casualties they inflict. In late March, these fighters took the lead in launching a massive attack on multiple rebel fronts, including the key towns of Alazrak, Um Serdiba, and Angarto, where fighting is ongoing.

“When they came into Alazrak, they burnt houses [and] food storages of the civilians; some older people who could not flee were killed with machetes,” said Omar Ibrahim, a rebel soldier who estimated the number of pro-government fighters in Alazrak at roughly 6,000.

According to Alex de Waal, a Sudan expert and the executive director of the World Peace Foundation at Tufts University, the Sudanese government is increasingly relying on a range of paramilitary and militia groups in addition to conventional troops, not because they are more effective in battle, but because they are cheaper and their abuses can’t be directly pinned on the government. “Historically, the worst atrocities in Sudan’s civil wars have been committed by irregular militia, acting on the basis that they enjoy impunity,” he said. “The implications for the civilians of these areas are very worrying: This is a trend towards a protracted, commercialized conflict.”

For centuries, the Nuba people lived in relative isolation, shielded first from Arab slave raiders and then from the brutal government in Khartoum by the rough, mountainous terrain of their homeland. But by the early 1980s, isolation had become a weapon the government could use against them: It instituted a deliberate policy of political and economic marginalization that pushed many Nubans to join the rebel Sudan People’s Liberation Army (SPLA), helping South Sudan eventually gain independence in 2011.

When new borders were drawn after the war, however, Nubans were left stranded in Sudan. For a time, they held out hope of negotiating for greater autonomy. But when the government reneged on its promise to hold a vaguely defined “popular consultation” that would give Nubans some say in how they were governed, and pushed for disarmament before the rebels were ready, they went back to fighting for their autonomy instead.

A similar popular consultation process broke down in the neighboring Sudanese state of Blue Nile, where fighting also resumed once again. The rebels in both areas now call themselves the Sudan People’s Liberation Movement-North (SPLM-N). 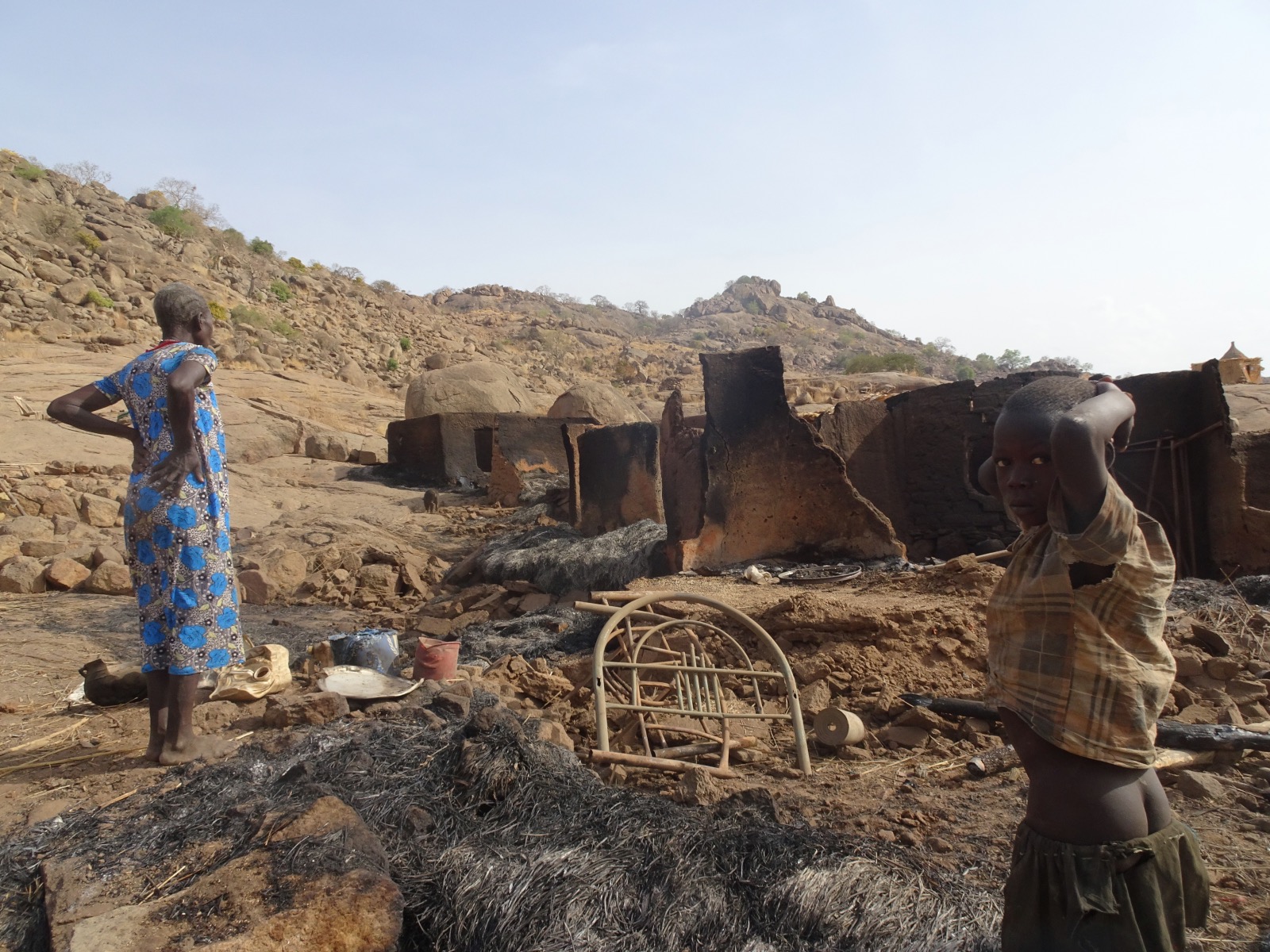 Civilians survey their destroyed home in Tinasa village in the Nuba Mountains after government warplanes bombed the area in April. (Image courtesy of Nuba Reports)

The conflict quickly settled into a war of attrition. Unable to defeat the SPLA-N militarily, the government began a relentless bombing campaign targeting farmlands and other civilian areas. The goal was to force people into government-controlled areas — if not with the bombs themselves, then with the hunger that followed.

“They continue to target the heavily populated areas — the farming areas, schools, churches, mosques,” said Kumni Farid, the mayor of Delami County in the Nuba Mountains, whose town was bombed most recently in February. “They think the power of the SPLA-N is from the citizens, so they bomb us along with our farms and cattle.”

In five years of conflict in Blue Nile and South Kordofan, where the Nuba Mountains are located, thousands of people have been killed and nearly 400,000 have been displaced. But with most humanitarian aid blocked by the Sudanese government and few journalists able to access the region, the conflict has remained virtually invisible to the outside world.

This year started with hardly a bomb dropped, a sharp contrast to the 816 dropped in January of last year alone. But since the offensive began in late March, the rate of bombing has increased, keeping farmers from tilling their fields.

“ Every day, they bombed; every day, it was impossible to farm,” said Mohamed Nalteen, the mayor of Kau, a rebel-controlled area in the Nuba Mountains, adding that there has been virtually no food in his area since June of last year.

According to a recent report by the Famine Early Warning Systems Network, an organization that monitors trends in food insecurity, both South Kordofan and Blue Nile face acute food shortages, mainly among internally displaced populations. Food production this year is projected to be 55 percent lower than last year, in part because of adverse weather conditions.

Some war-stricken areas are already facing famine. The South Kordofan and Blue Nile States Food Security Monitoring Unit, an independent organization that uses local monitors to assess food security levels, reported that 242 people, including 24 children, died of hunger-related illnesses in the second half of 2015 in the rebel-controlled Warni and Kau-Nyaro areas of South Kordofan. 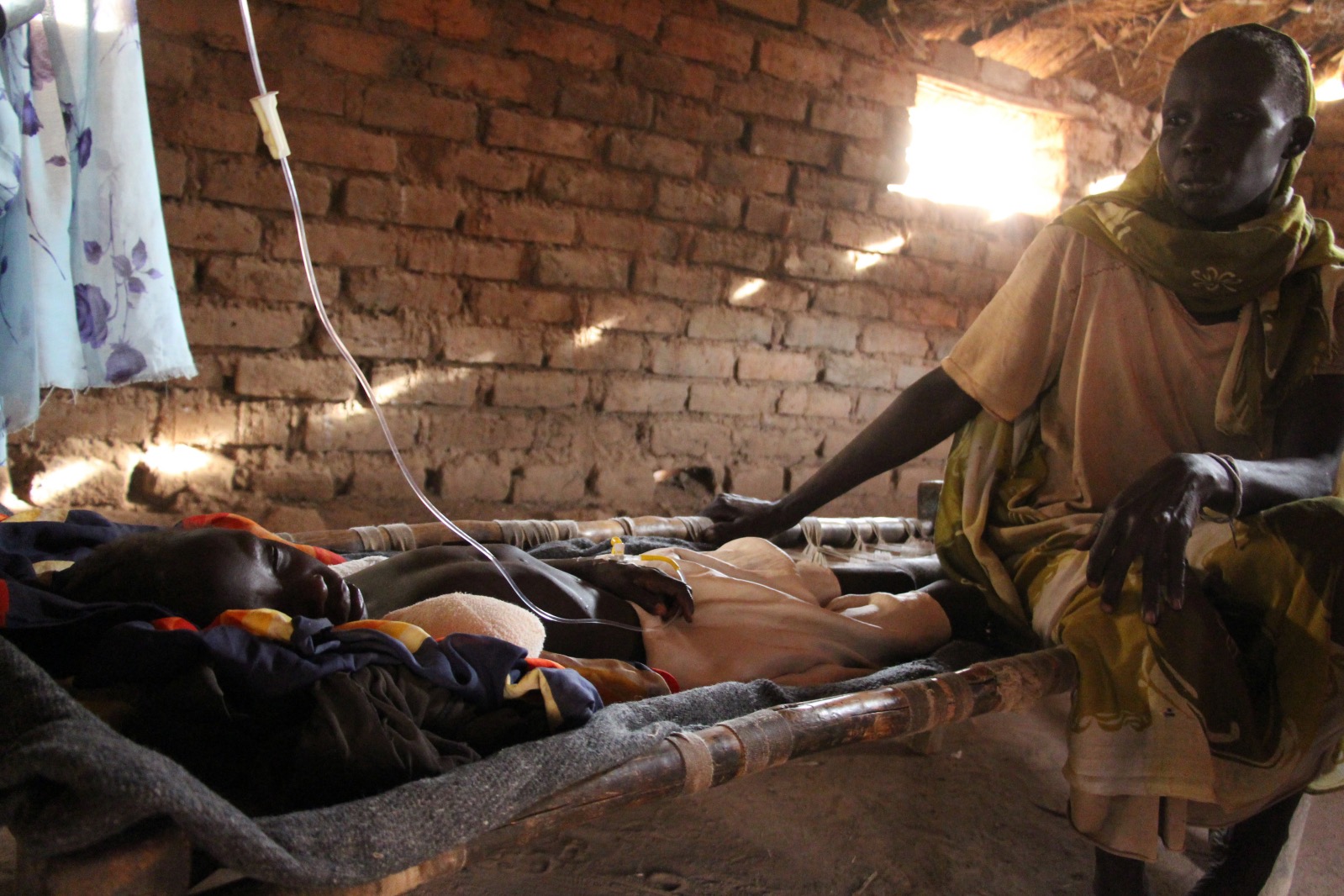 A mother sits with her injured daughter in Tinasa village in the Nuba Mountains after a bombing by the Sudanese air force in April. (Image courtesy of Nuba Reports)

The new government strategy hasn’t paid any military dividends: Sources on both sides of the conflict say that the SPLM-N repulsed nearly all of the government’s attacks, preventing it from gaining much territory. The rebel army also captured considerable military hardware. But the conflict remains largely frozen — and with little chance for a military victory on either side.

Diplomacy, too, has proved maddeningly slow. In March, peace talks failed for the 11th time. Neither side treats its counterpart as a credible broker for peace: The government has breached five peace deals with various rebel groups since 2005, and factionalism within the rebel coalition has made it unreliable in negotiations.

While the political impasse continues, it is the civilians of South Kordofan and Blue Nile who suffer the most. James Mohamed is a student at Tongoli Primary School in rebel-controlled Delami County. He is tired of government planes flying overhead, disrupting class. Whenever they hear the sound of an Antonov bomber, the entire class runs for the fox holes that have been dug near the school.

“War is always against education,” Mohamed said. “They [the government and rebels] should sit down and talk, as much as the government [is] bombing us. We are all Sudanese; nothing should push us to such wars.”

Just weeks after he spoke with Foreign Policy, a Sudanese Antonov bombed Tongoli Primary yet again, killing a teacher at the school.

Tom Rhodes is the managing editor of Nuba Reports.

Musa John is a freelance journalist in the Nuba Mountains.

They could divulge sensitive U.S. military training and intelligence to Tehran, a U.S. lawmaker warns.