Life After the Mud

In Indonesia, the world’s largest mud volcano has been erupting continuously for 10 years. A wealthy family's gas company may be to blame. But it’s the poor who’ve paid the price.

SIDOARJO, Indonesia — At 6 a.m., Muslimah, 45, steams rice and fries tempeh for her husband and children. After they eat, she dons a baseball cap and heads to work. Like many others in East Java who were displaced by the mud volcano, she drives an ojek, or motorcycle taxi. Her passengers are tourists, who flock to look upon the blighted landscape she once called home.

The mud now covers over 1,600 uninhabitable acres. It’s cracked dry in places, wet sludge in others. In the expanse’s distant center, white smoke rises from the crater.

It’s been ten years, but Muslimah still remembers vividly the quiet morning in May of 2006, when scalding mud and gas burst violently from the ground here in Sidoarjo, a small regency in East Java, Indonesia. “I was shocked,” she says. “It was terrifying: The mud soared like a black tower to the sky.” As the day wore on, the watery sludge, emanating from a single point, flooded homes, rice paddies, and factories, as villagers scrambled to collect their belongings and flee. The flow hasn’t stopped since. Within a month, Muslimah’s house was submerged entirely.

The Sidoarjo mudflow is the longest continuous disaster Indonesia has faced. Every year on May 29, those who lost their homes mark the anniversary of the day the eruption began.

For the first few months, the crater on average spewed 26 million gallons of boiling mud a day, according to the Sidoarjo Mudflow Mitigation Agency (BPLS), a government body formed in 2007 to oversee the disaster recovery. The rate has since slowed to 7-15 million gallons. Over the past decade, the mud has swallowed 12 villages, and displaced over 39,000 people, according to the government. At various sites around the mudflow, methane leaks are prone to combust at the careless flick of a lighter — although this problem has subsided with time.

For the victims, the nightmare has become a new normal. 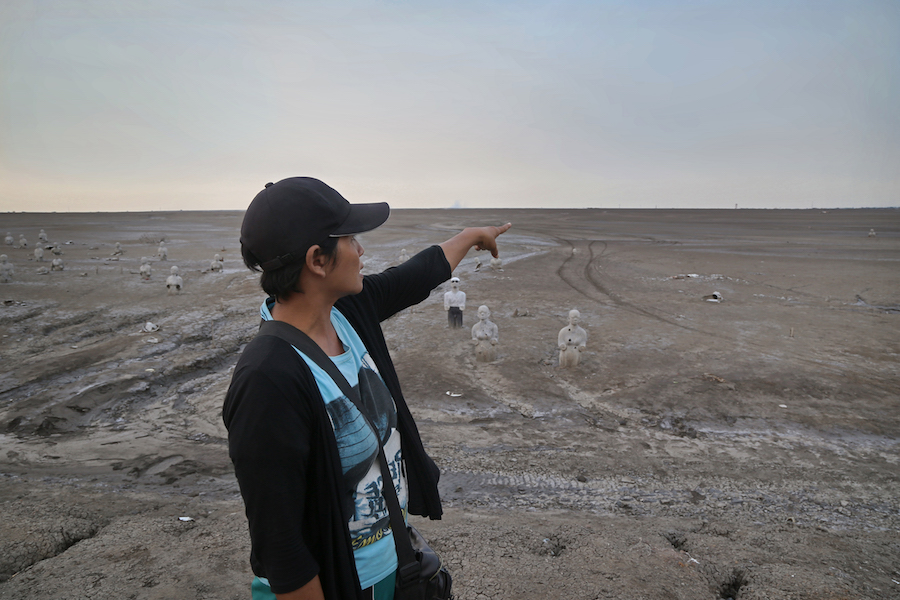 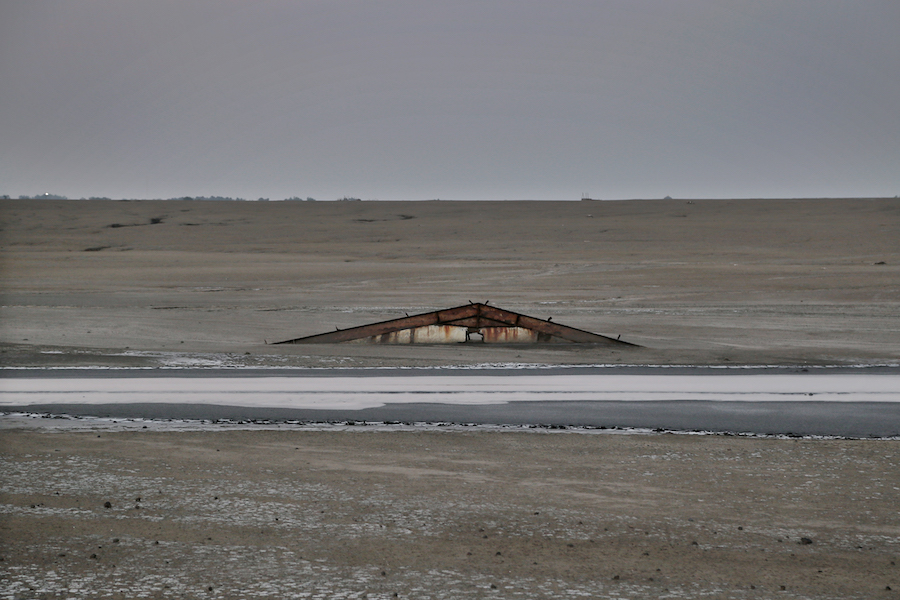 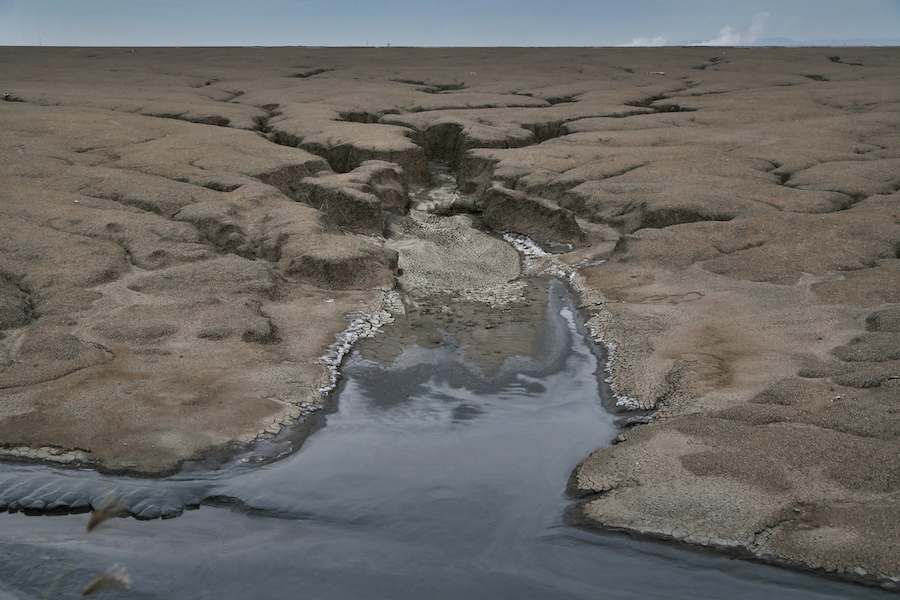 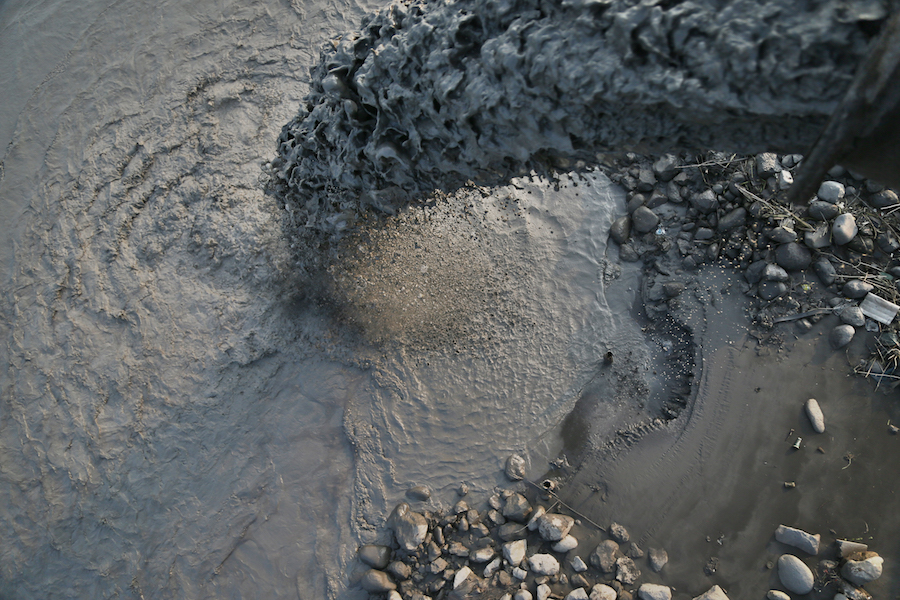 Muslimah points to the spot where her home once stood.

A former factory, all but the utmost peak of its roof submerged in mud.

Mud from the Sidoarjo disaster drains into the Porong River.

Kick-starting her motorbike, Muslimah snakes past rice fields before joining the road that connects Sidoarjo to Surabaya and Malang, the nearest major cities. Along the way, hand-painted signs announce: “Mud Tourism.” Atop the levee that holds back the heavy muck, ojek drivers lounge in the shade of bamboo shelters as visitors take photos of the surreal scenery.

“I don’t really understand why the tourists come, but I don’t mind,” Muslimah says. “I’m happy to meet visitors from all over Indonesia, from Malaysia, from America, from the Netherlands. Sometimes they give me foreign currency to keep as souvenirs. I ask myself, what am I supposed to do with 20 ringgits? So I exchange them.”

And then there are the scientists, who come to take measurements and collect samples. To this day, experts debate the origin of the event. Indonesia is known for its high volcanic and seismic activity. Some say a 6.3-magnitude earthquake, which struck the city of Jogjakarta 160 miles away just two days before the eruption, triggered the disaster.

Another culprit seems likely: Lapindo Brantas, an oil and gas company that was drilling for natural gas about 800 feet from the rupture. “We’re now 99 percent confident that the drilling hypothesis is valid,” Mark Tingay — an earth scientist at the University of Adelaide and lead author of a report on the mudflow, published by the journal Nature Geoscience — told the New York Times last year.

The family of the well-known former cabinet minister, tycoon, and failed presidential candidate Aburizal Bakrie controls Lapindo. In 2007, a year after the eruption commenced, the Bakrie family topped the Forbes list of richest Indonesians, with a net worth of $5.4 billion.

Over the past decade, victims like Muslimah and her family have waged a protracted battle to demand compensation from Lapindo. In the face of public outrage, a month after the eruption, the company apologized and announced its commitment to fully compensate for all losses. At first, it promised to hand out cash and/or resettlement packages within two years of receiving any given claim.

Then the 2008 financial crisis hit, and payments began to slow. “Sometimes it would stop for a month, sometimes three months. It was a very difficult time,” says Muslimah’s husband, Sadli. The 46-year-old had lost his job at a concrete factory when it, too, was buried under the mud. Many faced similar fates. Unable to afford new houses, the evacuees were forced to rent grimy apartments or take shelter in the homes of relatives. By the thousands, they staged marches and mass prayers. 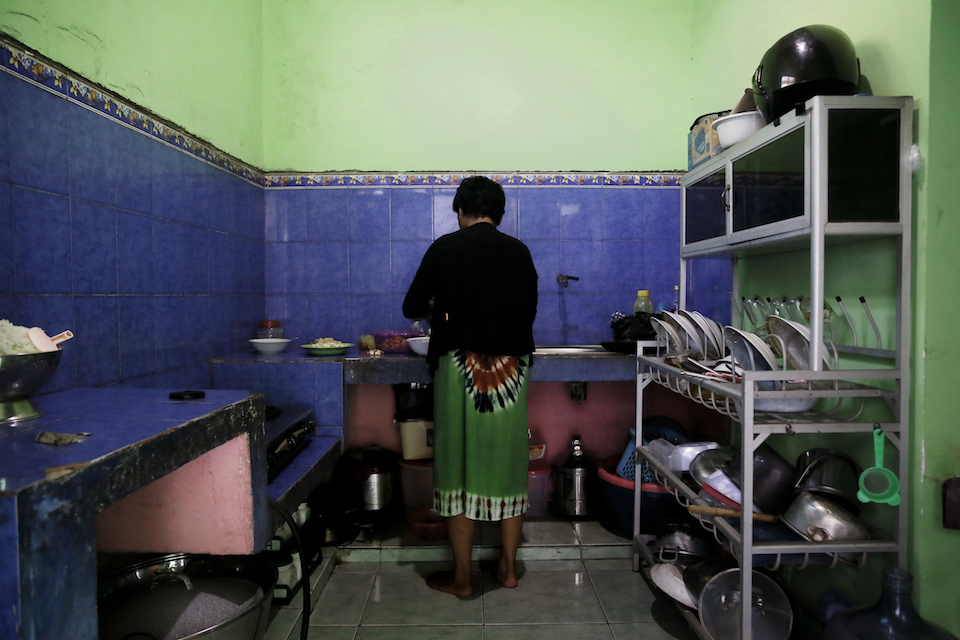 Muslimah prepares breakfast in her kitchen.

In December 2014, the national government finally stepped in. Newly elected President Joko Widodo loaned Lapindo $45.5 million to finance the outstanding compensations — fulfilling the campaign promise that won him Sidoarjo in the 2014 presidential election. Under the arrangement, the land that was once villages has been bought and paid for by Lapindo. The company will need to repay the government within four years — or forfeit those assets to the state.

Over the course of 2015, most displaced villagers finally received full compensation, although dozens are still waiting for their papers to be verified by authorities.

But earlier this year, outrage swept the community anew. Lapindo announced a plan to drill two new wells, just over two miles from the eruption site. Drilling was slated to begin this past March. Local protests halted the project.

“How can we not protest? We’re still traumatized,” Muslimah says.

Before the mudflow, she had lived in a house in Siring village for her entire life. She had sold fried snacks and iced drinks. She has two children from a past marriage, and two more with Sadli. Their youngest was six years old when the mud came.

Once the sludge reached knee level, the family abandoned their home, and, alongside Muslimah’s elderly father, took refuge in the new market in Porong, a neighboring district. Lapindo reported that 2,590 people sought shelter in the market’s vacant stalls.

“We piled into a small stall with three, sometimes four families,” says Sadli. “We slept on mats, and when help started pouring in, we were given blankets and some food — rice, with fish or eggs on the side. It wasn’t much, but we lived.”

Life was rough. “We couldn’t shower, we couldn’t wash our clothes,” Sadli says. “For every toilet, there were dozens of people constantly in line.”

After nine months, the first compensation payment came. The family rented a two-bedroom apartment. Muslimah thought it would be temporary, just until the rest of the payments arrived. But they didn’t. “It was too much for my father,” she says. He passed away in 2008. 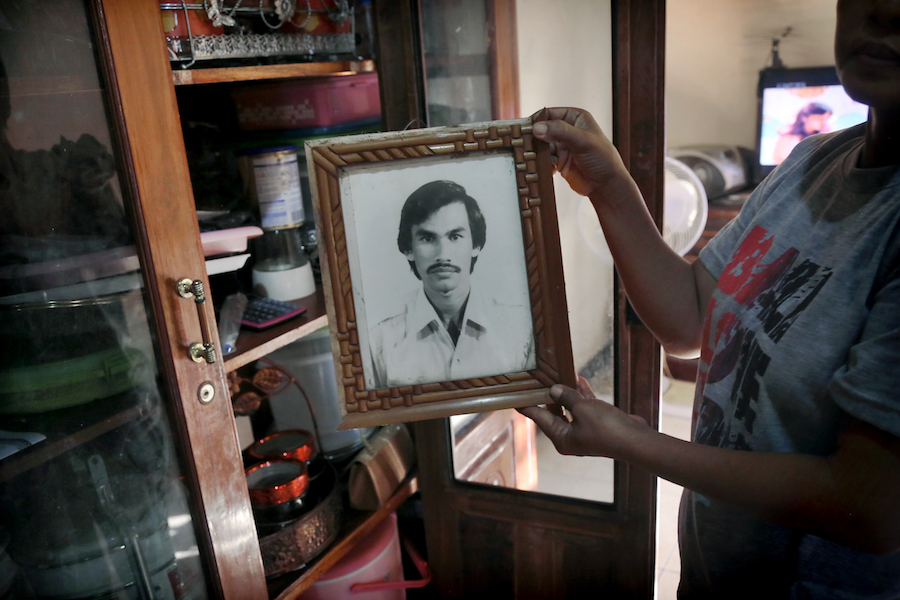 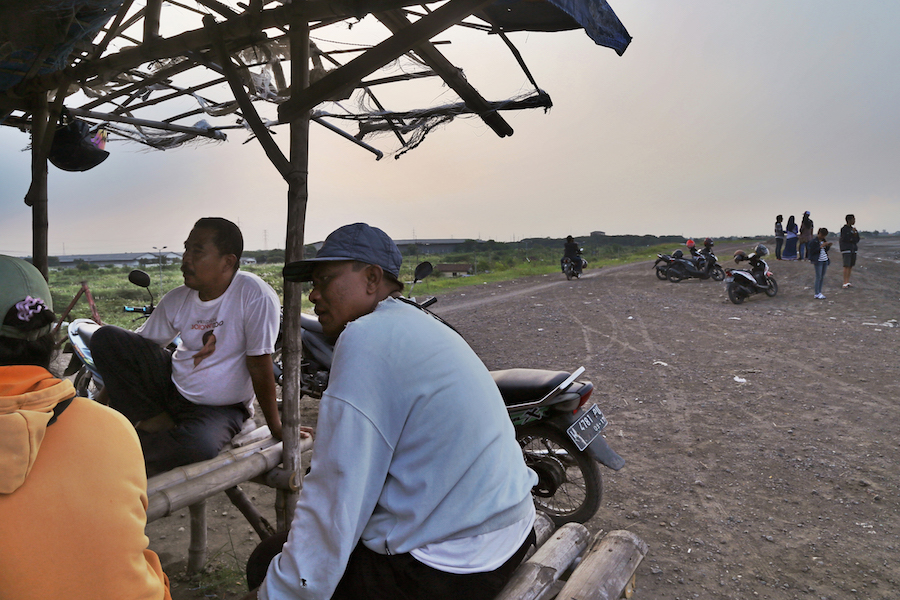 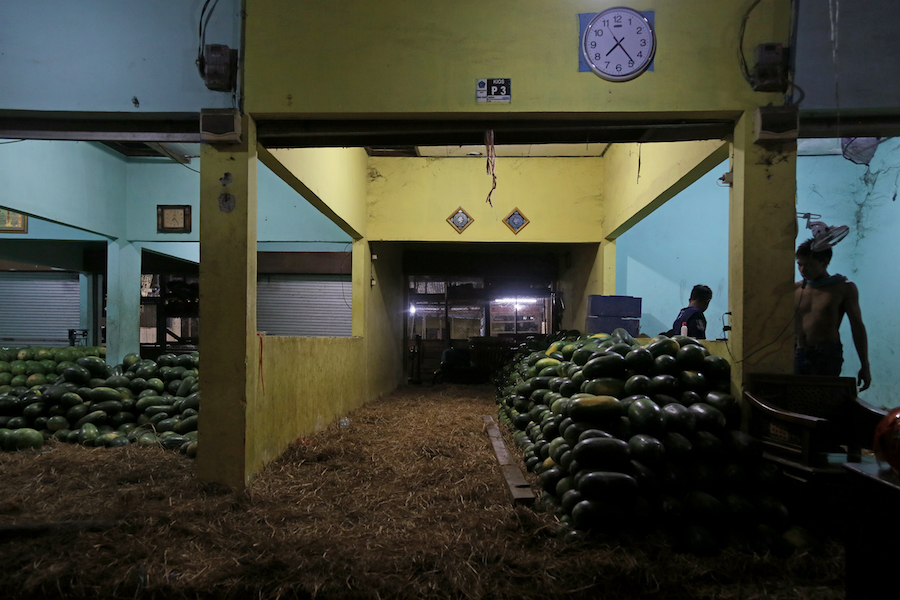 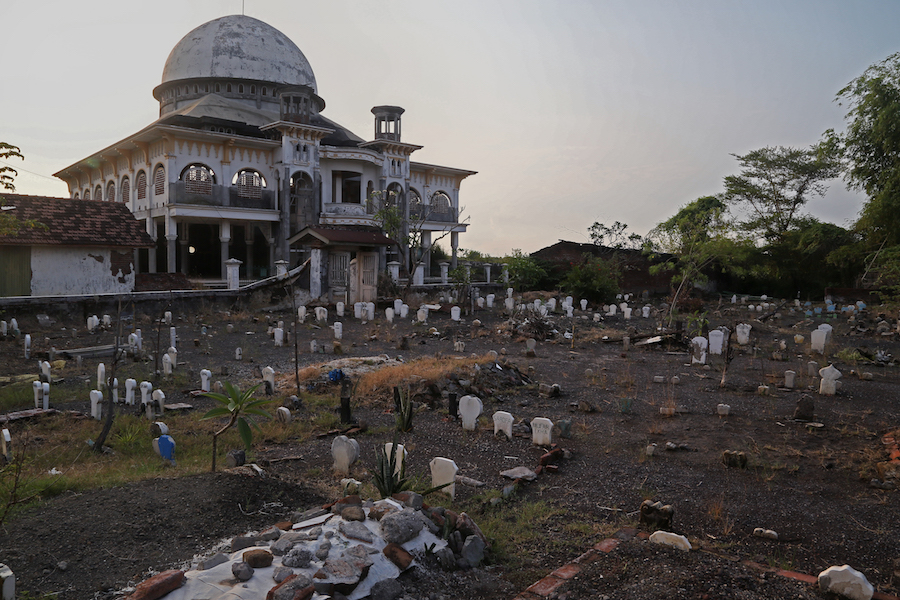 Muslimah holds a portrait of her father.

Ojek drivers hang out atop the levee that contains the Sidoarjo mudflow.

A papaya stall at Pasar Baru Porong, the New Porong Market, which served as an evacuation site after the eruption.

A mosque and graveyard stand abandoned. The surrounding villages were evacuated as the mud rose.

The family eventually lucked out and found a house for just over $3,000 in Kedung Kampil village. “But it was just the walls, there were no tiles or anything,” Muslimah says. They painted the interiors bright pink, purple, and yellow.

After the government stepped in, the family received almost $30,000 in compensation. For the first time in a decade, they can focus on moving forward. They bought a cart to sell banana pastries — manned by their second son — while their eldest raises fighting cocks in bamboo cages behind the house. Muslimah and Sadli both go to the mud field each day as ojek drivers, and Sadli picks up odd jobs in construction.

Across the gray expanse where Muslimah parks her motorbike to wait for customers, the mud is wet and gleaming. A rough, steady motor roars. A dredger sucks up sludge, channeling it toward a spillway that drains into the Porong River.

“Our understanding now is that the mud cannot be stopped. At the beginning, many tried. Researchers and technicians wrote proposals, but none of it worked,” says Riko Aditya, head of the operations supervision subgroup at the BPLS. “Now, our aim is just to stop the mud from outflowing.”

The disaster zone is ringed by levees made from packed soil that run for almost ten miles. Funded by Lapindo and the government, these barriers were built, then rebuilt and raised, as the muck continued to rise. In July 2015, the BPLS estimated that the area contained over 1.26 billion cubic feet of mud, compared to 1.1 billion in 2010. “The only current solution is draining the mud,” Riko says. 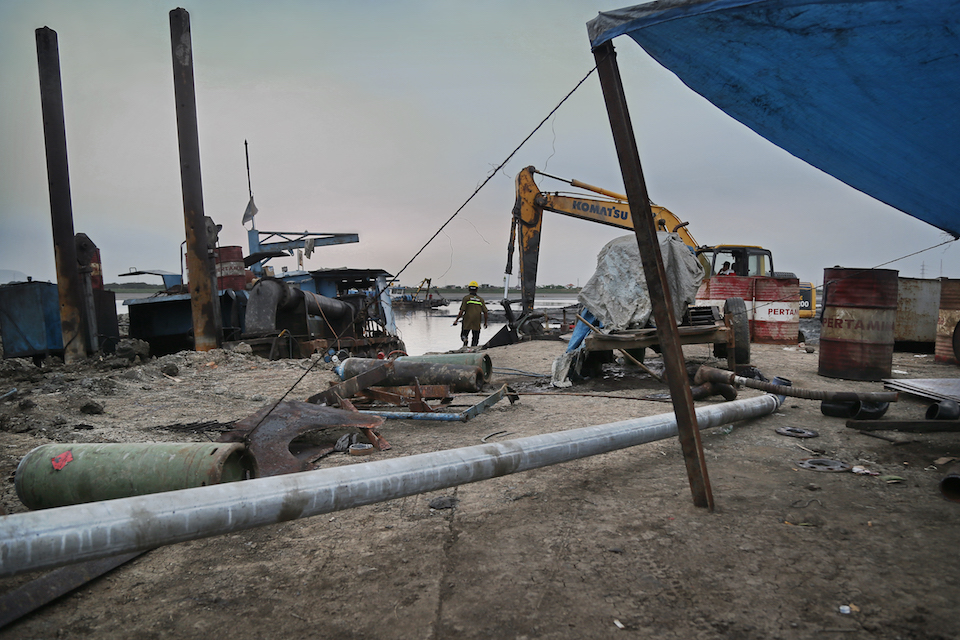 A dredging camp at the Sidoarjo mudflow disaster site. Draining mud into the Porong River remains the only viable mitigation method.

The effect on the waterway has been drastic. Dewi Hidayati, a professor of biology at the Tenth of September Technological Institute in nearby Surabaya, has analyzed fish survival rates in the Porong River between 2010 and 2013. “Downriver from the effluent, the dominant fish are those who can adapt to the mud. The rest die,” she says. “The mud also alters their habitat. Now the riverbed is covered with mud, so for example, it’s not conducive for fish to lay eggs. They are stressed.”

A number of studies have tracked changes to the environment around the mudflow, from biodiversity to land subsidence. Despite fears, the mud has shown no urgent effects on human health, though it still needs to be studied thoroughly, Dewi says.

“For now, what’s evident is that the effect is indirect,” she says. “The mud contains a high level of aluminum, which in a normal pH, is perfectly safe.” But if the pH levels drop, due to household or industrial waste, for example, she says the aluminum will begin to pose a hazard.

“There needs to be awareness, that although the ecosystem can adapt to a certain extent, if the conditions become extreme, then it could be catastrophic,” she warns. “People have begun to forget about the mud. Now they think of it as normal. But it’s not normal.”

Muslimah and Sadli haven’t forgotten what they lost.

Sitting on a wooden bench at home, Sadli notes that this year’s anniversary of the eruption falls a week short of Ramadan, the Muslim holy month that ends with Idul Fitri, a festive celebration during which Indonesians traditionally return to visit their hometowns. “And us?” Sadli asks. “Where do we go?”

Aria Danaparamita is a journalist based in Jakarta, Indonesia. She covers social transitions in Southeast Asia. (@mitatweets)