The world is in turmoil but Donald Trump is still his same old self.

We woke up this morning to an almost unrecognizable world: Britons voted to leave the European Union (and were aggressively Googling what that actually means for them hours after the polls had already closed.) France overtook the U.K. as the world’s fifth largest economy. Scotland and Northern Ireland may be heading for another referendum to remove themselves from Great Britain.

But never fear. Amid the chaos, there’s one constant: Republican presidential candidate Donald Trump. He made clear that he is still very much himself Friday when he congratulated the United Kingdom on the successful Brexit during a press conference at his own golf course in Scotland — whose population voted overwhelmingly not to leave the European Union.

At one point during the press conference, Trump was surrounded by swastika-emblazoned red golf balls that comedian Lee Nelson handed out in protest of his visit to Turnberry, which celebrated its grand reopening Friday. “Get him out,” Trump said with a look of disdain as his security details pulled Nelson away from the crowd. (Scottish police reportedly later had to scour Trump’s property to search for the golf balls, which were scattered across the course.) 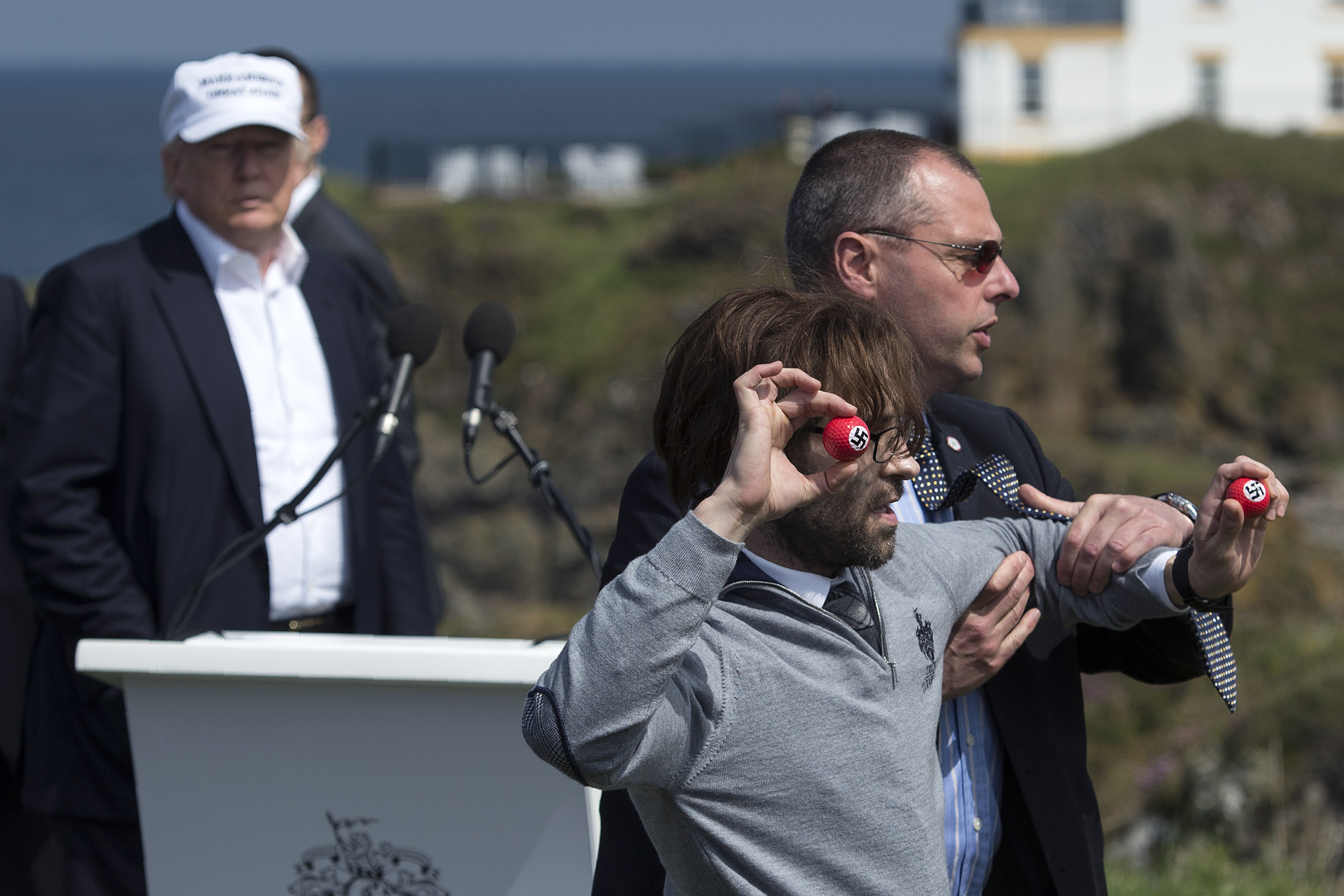 He then claimed other countries would follow Britain’s lead, and pointed to his own success in the polls as proof that voters worldwide want to take their countries back, claiming he sees a “parallel” between the Brexit and what’s happening in the United States.

“People want to see borders,” he said. “They don’t necessarily want people pouring into their country that they don’t know who they are or where they come from, they have no idea.”

As of Friday, no British or Scottish politicians planned to meet with the controversial real estate mogul, who is in Scotland for two days. Trump claimed that had nothing to do with his policies and more to do with the volatile state of the U.K. He said that British Prime Minister David Cameron, who announced his resignation after the Brexit results, would have met him but doesn’t want to meet “anybody” now because of the outcome of Thursday’s vote. When Guardian reporter Ewen MacAskill suggested that maybe no one wanted to meet with him because he’s “toxic,” Trump insulted the veteran reporter, calling him a “nasty, nasty guy.”

And while the rest of the world panics about the global market’s dramatic reaction to the news, the self-identified successful businessman is instead celebrating the pound’s plunging loss of value. According to him, it’ll be good for his golf business.

“When the pound goes down, more people are coming to Turnberry, frankly,” he said.

What to Do About the Children of the Islamic State