Militants from the former Soviet Union used to pass through Turkey on their way to Iraq and Syria. Now they’re staying behind and hitting soft targets like the Ataturk Airport.

On Tuesday, three men arrived in a taxi and walked into Istanbul’s Ataturk Airport wielding assault rifles and suicide bombs. They indiscriminately shot their way past a security checkpoint and then set off their bombs, killing 44. The tactic was a familiar one, practiced in Paris and Brussels, but the nationalities of the perpetrators were not: Russian, Uzbek, and Kyrgyz.

It’s not unusual to find Central Asians fighting in Syria or Iraq for the Islamic State or the al Qaeda-linked Nusra Front, said Seth Jones, a former Defense Department official and now analyst at Rand Corp. “What’s unusual is for them to be at the tip of the spear conducting attacks in Turkey.”

And that raises a pair of new security challenges for a Turkey still reeling from one of the worst terrorist attacks in its history. Large numbers of migrants from former Soviet nations like Uzbekistan already live and work in Turkey, so militants sent into the country from Syria or Iraq have a tight-knit community of expatriates they can disappear into. That means, in turn, that Turkish security personnel who have long focused on their country’s restive Arab and Kurdish populations must now look for signs of radicals hiding among their Caucasian and Central Asian communities as well.

Turkish police have identified Ahmet Chatayev, a Chechen terrorist, as the mastermind of the attack, according to the Turkish newspaper Yeni Safak. He is described as working for the founder of the Caucasus Emirate and joined the Islamic State in 2013. Chatayev is currently wanted in Russia on terrorism charges and is sanctioned on a U.N. terrorism list for “training and redeploying” Russian-speaking militants in Syria back into Russia. Quoting unidentified intelligence sources, the Turkish newspaper said Chatayev planned the attack in a rental house in an Istanbul neighborhood near a shopping mall. And it said surveillance video shows the terrorists taking a taxi from the shopping mall to the airport on the day of the attack.

Although Turkey and Western governments believe the Islamic State was linked to the massacre, it remains unclear if the attackers were dispatched to Turkey by top Islamic State leaders. But if the effect of the Istanbul bloodshed persuades the group’s commanders to call on Russian-speaking cadres to launch more terrorist attacks, it would mean the extremists have committed some of their most capable fighters to their foreign terrorist enterprise.

“They punch way above their weight,” said Patrick Skinner, director of special projects at the Soufan Group, a private security consultancy, and a former CIA case officer who worked on counterterrorism issues. Compulsory military service in the former Soviet republics means the Islamic State doesn’t have to provide basic training, and with the region awash in weapons, they have what Skinner called a “lifelong exposure to AK-47s.”

Former Soviet states provide the third-largest number of foreign fighter recruits for the Islamic State behind Western Europe and the Middle East and North Africa, according to the Soufan Group and U.S. government reports.

The number of foreign fighters from Central Asian countries has markedly increased in recent years, according to experts and Western officials. The Soufan Group reported that a total of approximately 2,000 volunteers came from Kazakhstan, Kyrgyzstan, Tajikistan, Turkmenistan, and Uzbekistan. In August 2015, the Islamic Movement of Uzbekistan, which has operated in Afghanistan and Pakistan since the early 2000s, formally joined the Islamic State. Official estimates from Moscow place the number of Russians fighting in Iraq and Syria at more than 2,000.

Turkey remains a major destination for Central Asian students, laborers, and tourists and citizens from the region — who are able to travel there without a visa. And with its porous border to Syria, Turkey has emerged as the main transit point for foreign fighters from Central Asia and other former Soviet states en route to join the Islamic State there.

A 2015 report commissioned by the U.S. Agency for International Development assessing trends in violent extremism in Central Asia suggested that the U.S. government should consider launching programs in Turkey to provide assistance to “economically marginalized” ethnic Uzbek immigrants and prevent their potential recruitment.

It also said the United States “faces a highly coordinated and well-funded information assault” in Central Asia from Islamist extremists that poses a difficult challenge for the U.S. government.

The specter of radical Islam has loomed large in the minds of the Kremlin and Central Asia’s autocratic and secular governments. During Tajikistan’s devastating 1992-1997 civil war, extremist militants from across the region joined a conflict that left more than 50,000 people dead. In 1999, a series of car bombings linked to the Islamic Movement of Uzbekistan rocked the Uzbek capital of Tashkent and left 16 dead and 120 wounded. Following the declaration of the Islamic State’s caliphate in June 2014, these fears have only grown among the region’s leaders, many of whom are still former Soviet-era Communist Party bosses.

But in response to the growing threat, Central Asian governments have used heavy-handed tactics that experts say will only fuel radicalization. In Tajikistan, authorities have reportedly forced 13,000 men to shave their beards while police have also pressured shops and vendors to stop selling Islamic headscarves. Similarly, Tajikistan’s regime outlawed the sole legal Islamic political party in Central Asia in September 2015, long seen as one of the region’s few moderate religious voices.

“Throughout Central Asia, the leaders have a view that the more people pray, the more they can be radicalized,” said Erica Marat, a Central Asia expert at the National Defense University. “This leads to a forceful impulse to try to control religion, which can often backfire.”

In recent months, the Islamic State has bombarded social media with Russian-language propaganda aimed at attracting new recruits, as well as Uzbek-language appeals. That media offensive intensified after Russia entered the Syrian civil war in September to prop up the regime of President Bashar al-Assad. 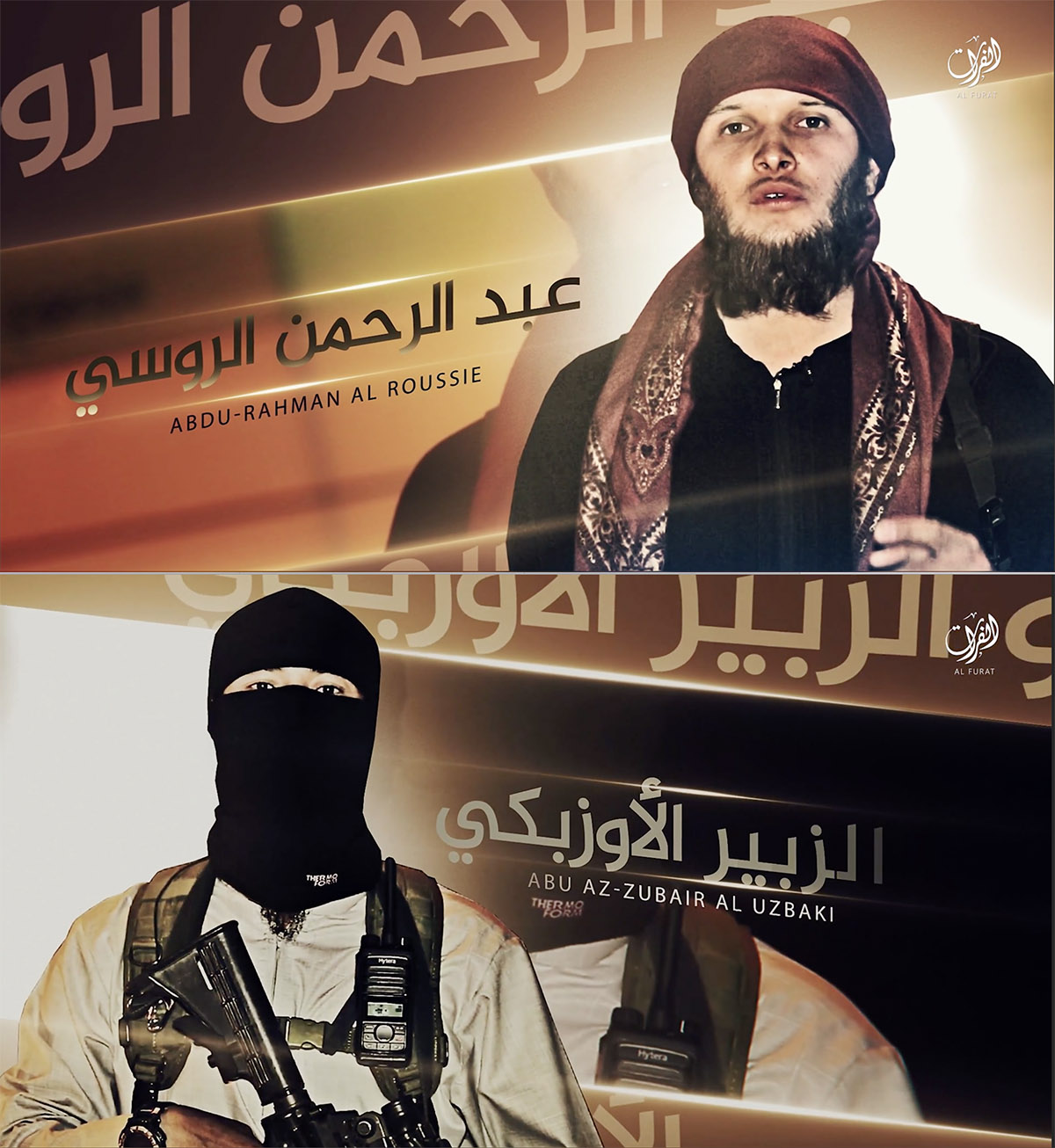 That offensive has targeted the Caucasus and Uzbekistan, according to Michael Smith, the COO of the security consultancy Kronos Advisory, which tracks jihadi propaganda. On June 19, fighters in the Islamic State’s Furat province released a video about the attacks in Orlando and France that included statements by Russian, Uzbek, American, Indonesian, and French operatives.

“The signal was clear: The Islamic State intends to mobilize its members from around the world for attacks in the West,” Smith said. “If the terrorists responsible for the attack in Istanbul were indeed Islamic State members, it would seem that signal was amplified with their attack.”

There has been an increase in arrests of Islamist extremists reported across the former Soviet Union in the past few months, which could signal ramped-up activity by Islamic State cells, according to Caitlin Forrest of the Institute for the Study of War. But it remained unclear if the attack at the Istanbul airport marked the first of a wave of attacks using Central Asian recruits.

Facing repression at home, many of Central Asia’s extremists have left the region for Iraq and Syria. Similarly, Moscow is believed to have deliberately turned a blind eye to people on watch lists leaving the country to join groups in the Middle East, while cracking down with extreme force on the radical elements that remain. According to a March report by the International Crisis Group, it has been Russian policy to allow Islamist radicals, many from the North Caucasus republics of Chechnya and Dagestan, to leave the country unimpeded.

“Russian security services allegedly opened borders for local radicals to leave the North Caucasus before the [2014] Olympics,” the report said. “Since the second half of 2014, however, the authorities have reduced the outflow and systematically hunted down recruiters and fundraisers, as well as potential fighters.”

Anna Borshchevskaya, a fellow at the Washington Institute for Near East Policy, said so far few of the militants who left have returned.

“But Russian officials are very concerned that in the future they will come back, and when they do, it will turn very bad,” she said. “This is a trajectory that has been many years in the making.”

Worried about the threat, the Russian legislature recently passed sweeping counterterrorism laws that once signed by President Vladimir Putin will grant authorities far-reaching surveillance powers, including access to all telecommunications records in the country for six months. Moscow has also sought to forge closer security ties to its Central Asian neighbors in the name of combating terrorism.

As the Islamic State has marched across Iraq and Syria, battle-hardened fighters from Chechnya and Dagestan have contributed to its military victories. Abu Omar al-Shishani — a pseudonym that means “Omar the Chechen” — rose to become a top commander in the Islamic State and served as its “minister of war.” U.S. forces said they killed the red-bearded militant in a March airstrike.

According to Skinner, the former CIA officer, it was rare for experienced fighters under Shishani’s command to carry out suicide missions. His well-trained operatives were simply too valuable to be dispatched on operations that would likely claim their own lives. But the use of Russian-speaking operatives in Istanbul may signal a shift in tactics that could be the result of the Islamic State’s battlefield losses.

Western-backed forces have, in recent weeks, liberated significant swaths of territory under Islamic State control, including the Iraqi city of Fallujah, and have entered Manbij in northern Syria. The setbacks may have prompted the group to “shift the battlefield to the Istanbul airport,” Skinner said. Losing on the Syrian and Iraqi battlefields, the Islamic State’s calculus on how to best deploy its experienced fighters may have changed, he added.

So as the Islamic State keeps losing territory, expect more of these attacks. The campaign against the Islamic State, CIA Director John Brennan said two weeks ago, has “not reduced the group’s terrorism capability and global reach.”

“As the pressure mounts on ISIL, we judge that it will intensify its global terror campaign to maintain its dominance of the global terrorism agenda,” Brennan said, using an alternate name for the militant group.

The Istanbul airport attack may have validated that prediction.