The Olympic Team With No Flag

The first Refugee Olympic Team will arrive in Rio dreaming of gold — and the countries they were forced to leave behind.

Photography by Will Swanson

NAIROBI, Kenya — The first time Yiech Pur Biel boarded a plane, in 2005, it was to escape the war-torn corner of southern Sudan where he grew up. He has lived in a refugee camp in northwestern Kenya ever since. If all goes as planned, the second time he boards a plane, in just a few weeks, it will be to make history. Biel is slated to compete in the 800-meter track and field event at the Summer Olympics in Rio de Janeiro as a member of the first-ever Refugee Olympic Team.

In the face of unprecedented global displacement as a result of war, despotism, and poverty, the famously apolitical International Olympic Committee (IOC) has made an unprecedented political statement. It has created a team of 10 refugee-athletes from Syria, South Sudan, the Democratic Republic of the Congo, and Ethiopia who will compete not just for individual Olympic glory, but for the dignity of the world’s 65.3 million displaced people. Their very presence in Rio is a call for peace in war-torn nations and acceptance of refugees elsewhere in the world.

“This will be a symbol of hope for all the refugees in our world and will make the world better aware of the magnitude of this crisis,” IOC President Thomas Bach said as he officially introduced the team earlier this month. “It is also a signal to the international community that refugees are our fellow human beings and are an enrichment to society.”

Biel, who has taken to calling himself a refugee ambassador, is more than happy to be the face of that message. He will lead the parade of athletes at the opening ceremony in Rio, where his team will march under the Olympic banner, since they have no flag of their own. “Most of the refugees, they are looking upon us,” he said in a recent interview after a light morning run in the rolling green hills outside the Kenyan capital, Nairobi. “They are saying, ‘You are on a team that represents us.’ Even if we will not manage to get gold, at least we can do something to show the world we can make it in life.”

Yiech Pur Biel (center), a refugee from South Sudan, trains to compete in the 800-meter track and field event at the Rio Olympics in August.

Back in 2005, at the tail end of a decades-long civil war that preceded South Sudan’s independence from Sudan, Biel’s home village was cut off from the rest of the country by fighting. Years earlier, his father had joined the southern rebellion against the Sudanese government, leaving his mother to care for Biel and his two younger siblings. When they had nearly exhausted their food supplies, she decided to flee to nearby Ethiopia with the two younger children. Biel, who was 10 at the time, stayed in the care of neighbors. He never saw his family again. (He’s heard rumors that they have since returned to South Sudan, but he doubts they know he will be competing in the Olympics.)

A relief team from the United Nations eventually made it to the isolated village and, recognizing the urgency of the situation, cobbled together an evacuation plan. Biel was bundled onto an emergency flight and shuttled to the Kakuma refugee camp, across the border in Kenya.

Opened in 1992 to shelter Sudanese refugees, Kakuma camp is now home to displaced people from across the region, but more than half are South Sudanese, some of whom arrived in the wake of a new civil war that broke out in that country in 2013. Others, like Biel, never left after the earlier war ended, because they had no homes or families to return to.

“It saved my life,” Biel said of Kakuma. “Most of the people, when they’re being called a refugee, they feel ashamed.” But he says the refugee camp not only saved his life; it helped him become who he is today — a high school graduate who is about to compete against the world’s best sprinters in Rio.

“Where I’ve reached now, it’s because of being a refugee,” he said.

Biel’s unlikely road to the Olympics began on World Refugee Day in June 2015, when the Tegla Loroupe Peace Foundation, which was founded by the Kenyan marathon champion of the same name, helped organize a series of foot races in some of Kenya’s refugee camps at the request of the U.N. refugee agency (UNHCR). Jackson Pkemoi, an official at Loroupe’s foundation who manages the Refugee Olympic Team’s training facility outside Nairobi, said last year’s World Refugee Day races sparked the idea of establishing a refugee team that would compete in national and regional competitions. Foundation officials began organizing time trials in Kakuma and Dadaab, another camp near the border with Somalia that houses at least 340,000 refugees, and setting up a training center in the Ngong Hills on the outskirts of Nairobi. 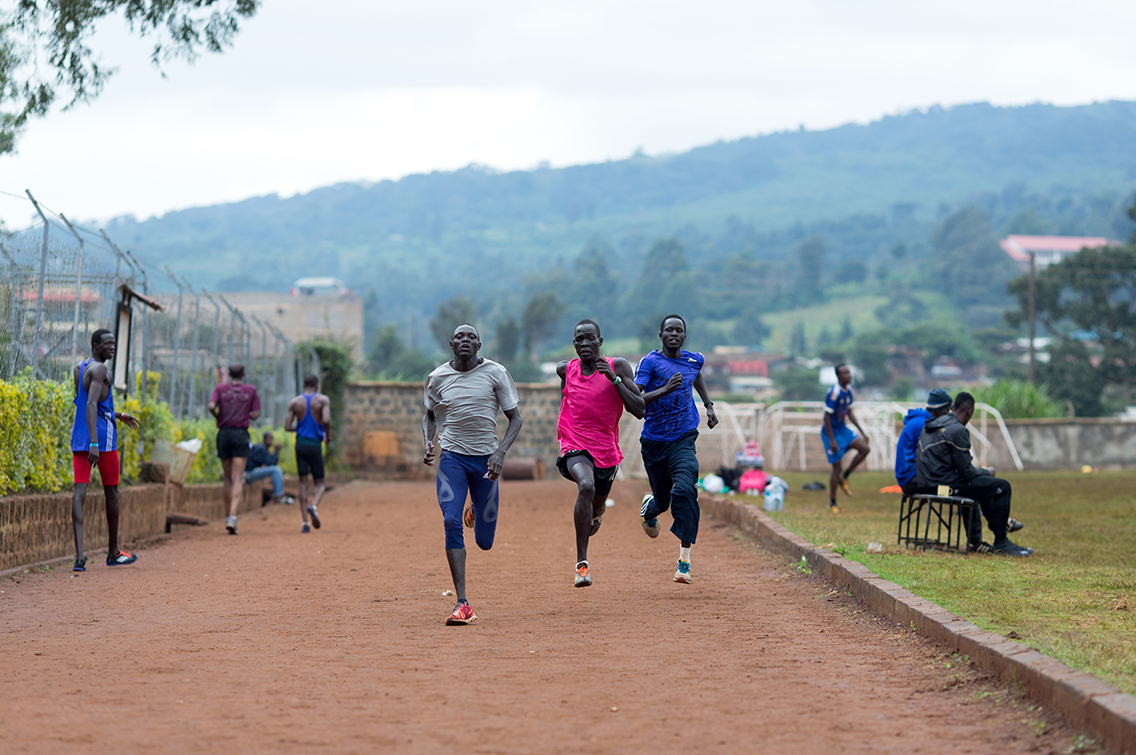 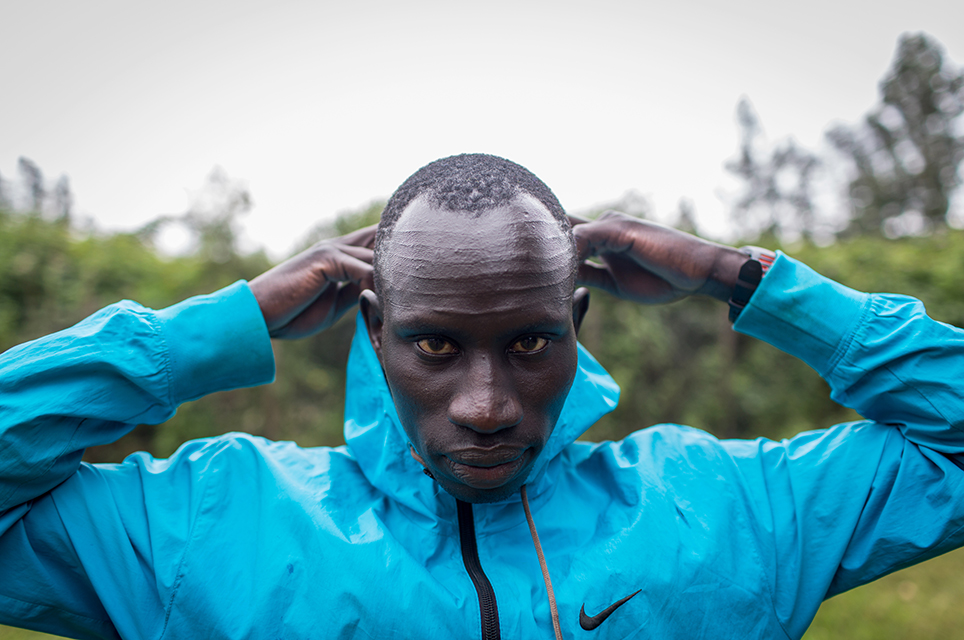 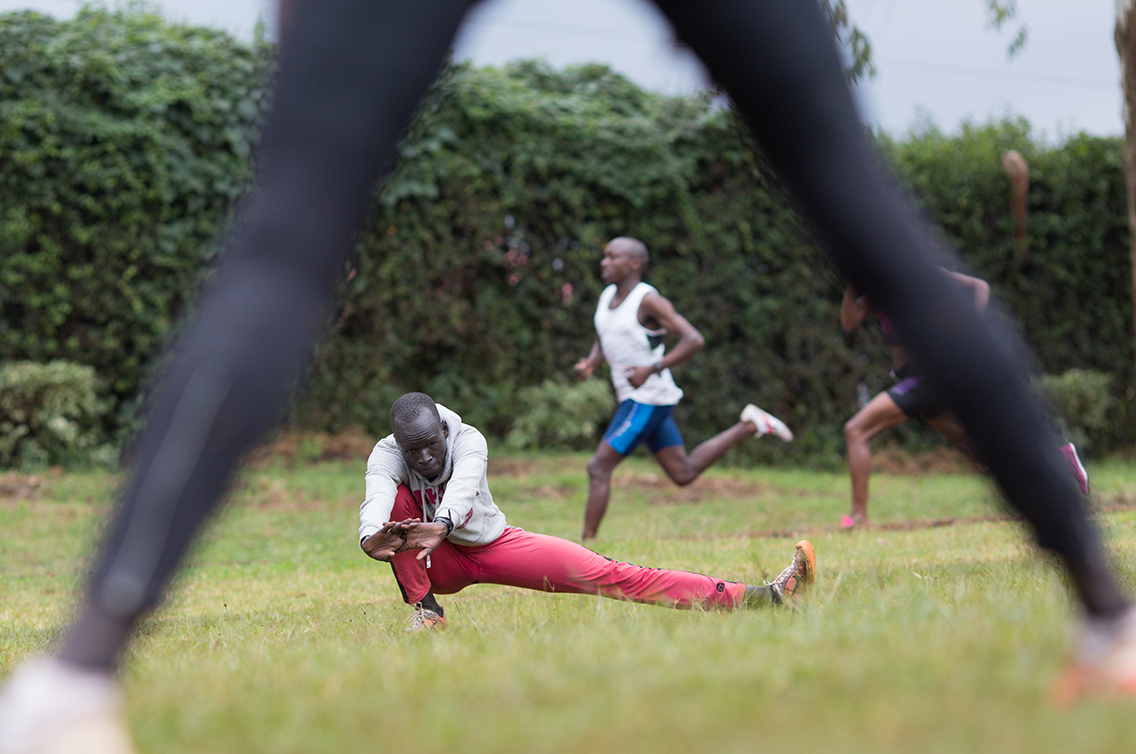 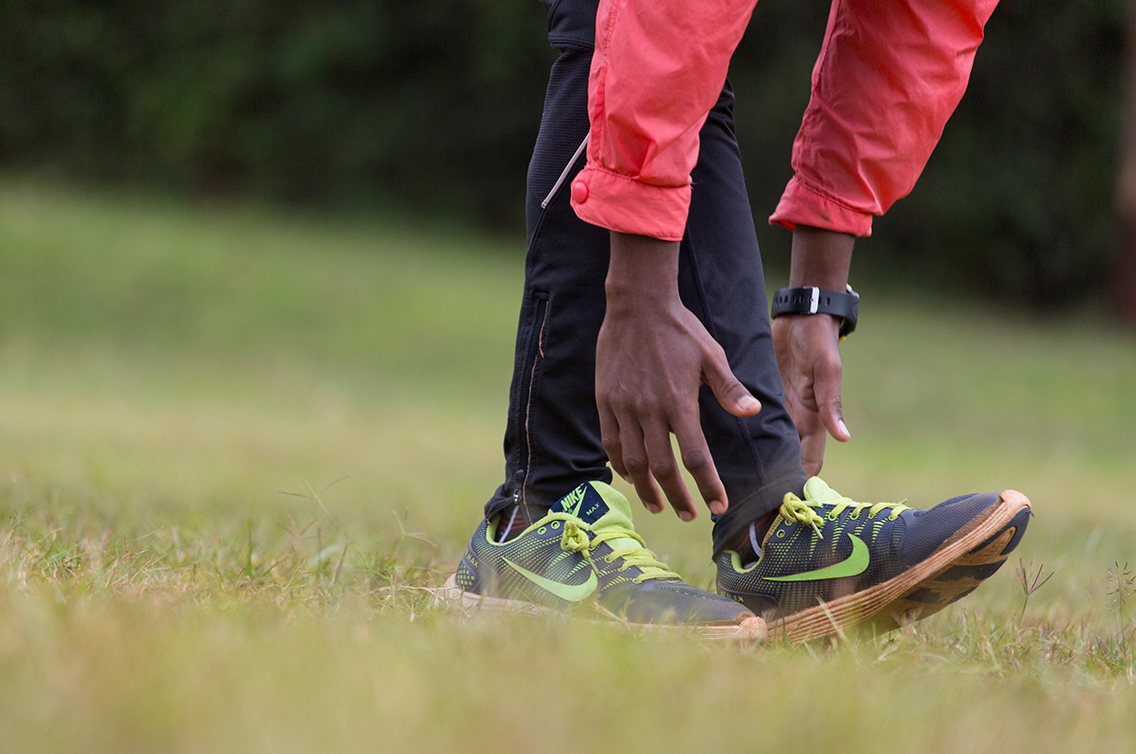 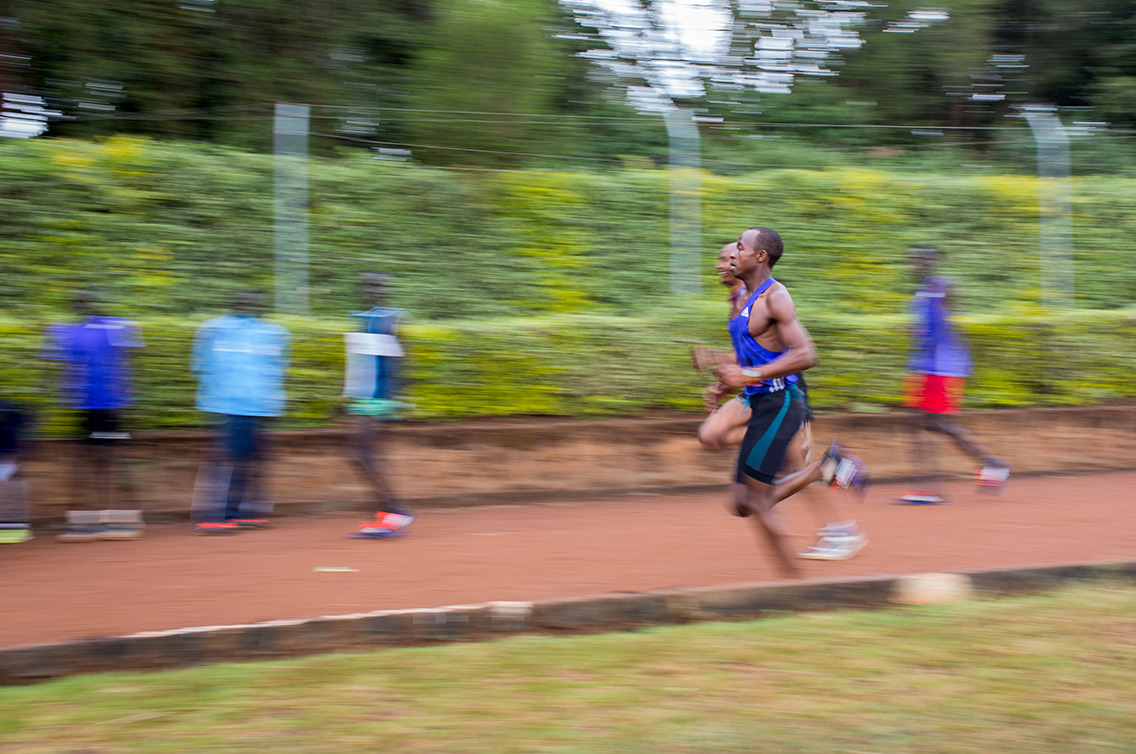 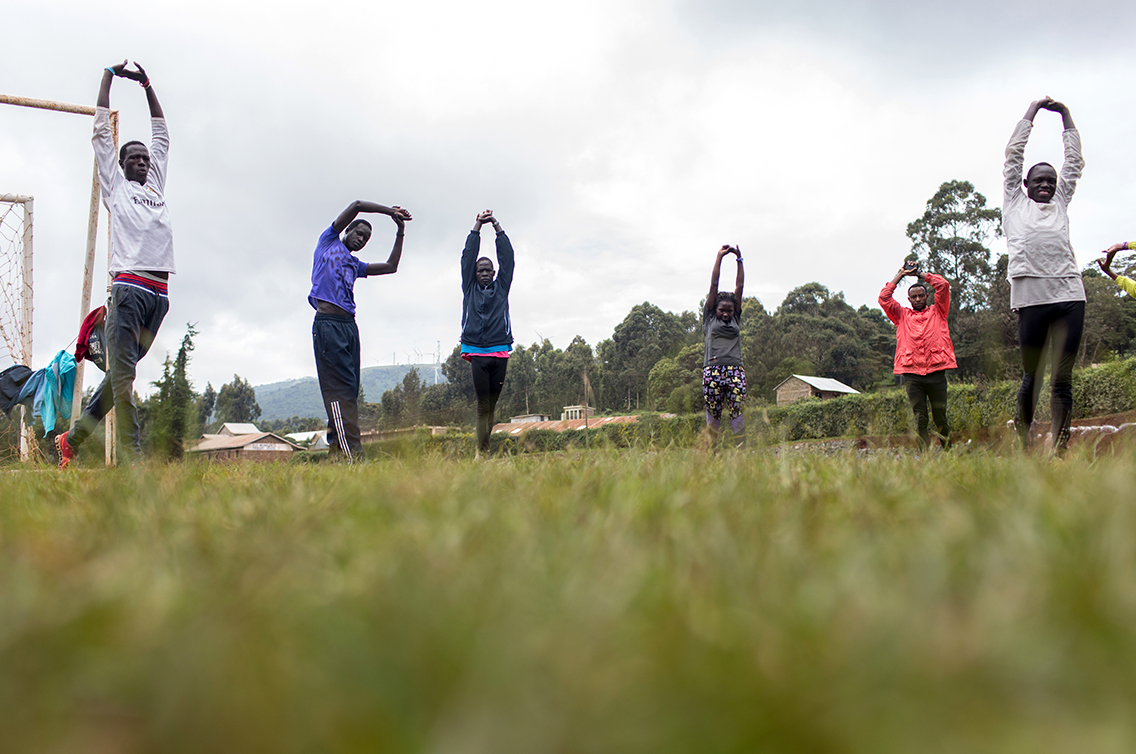 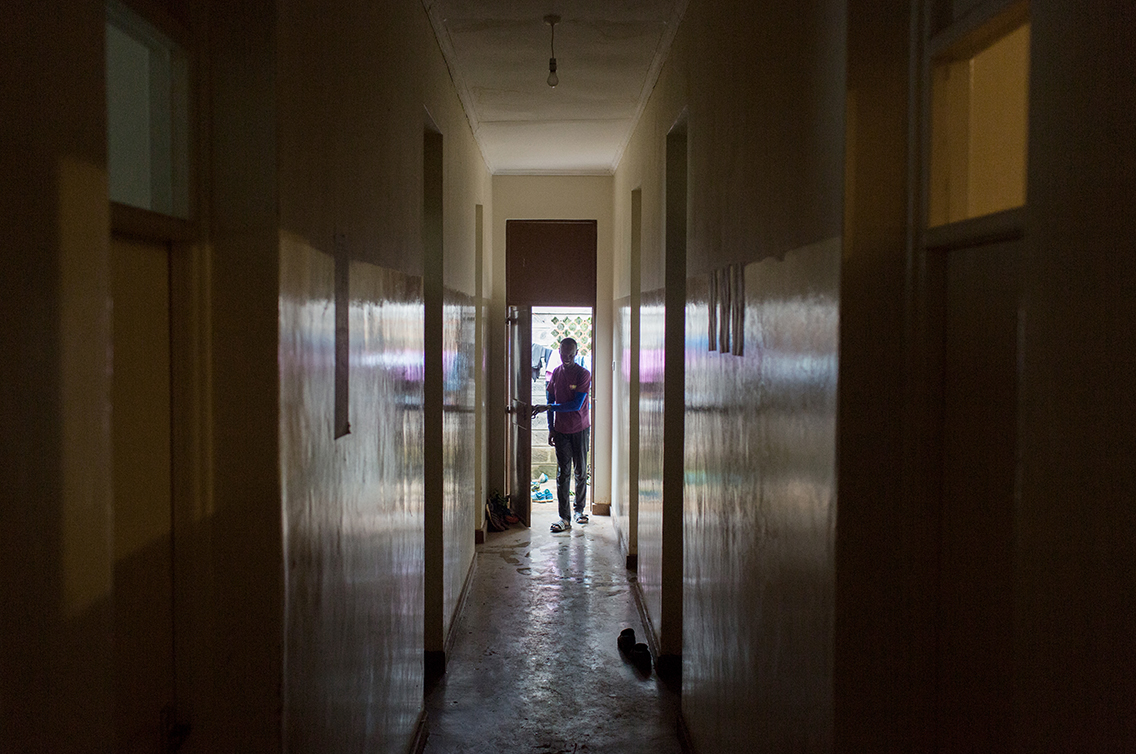 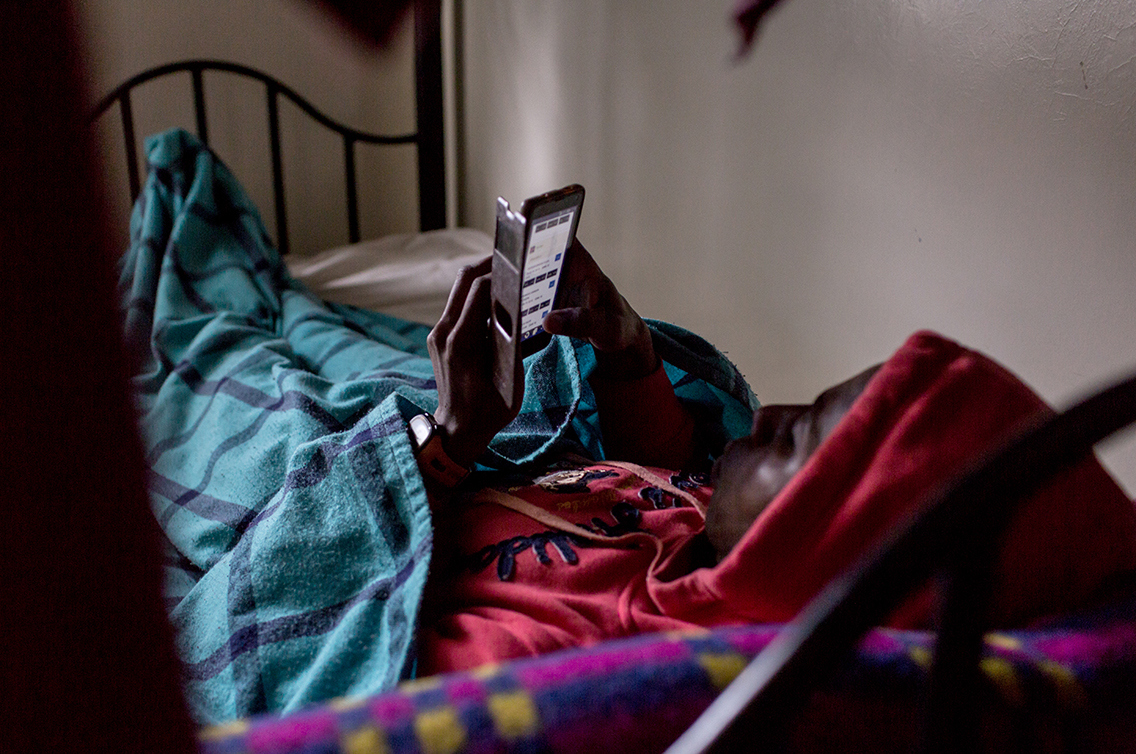 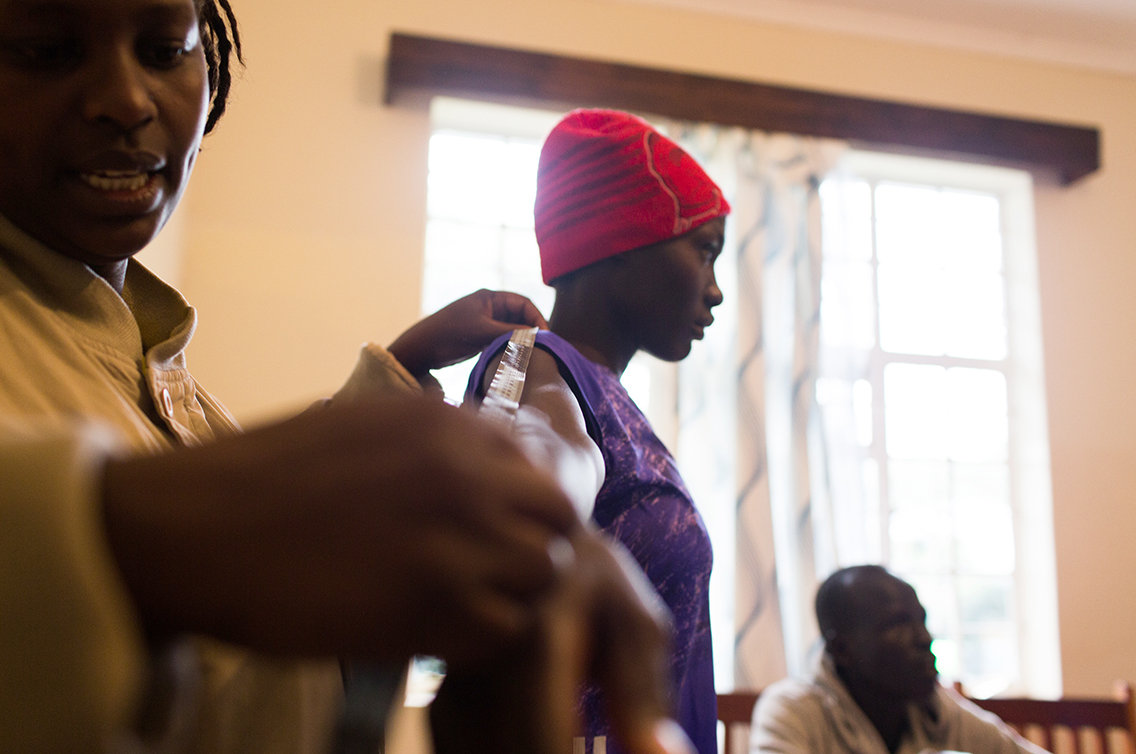 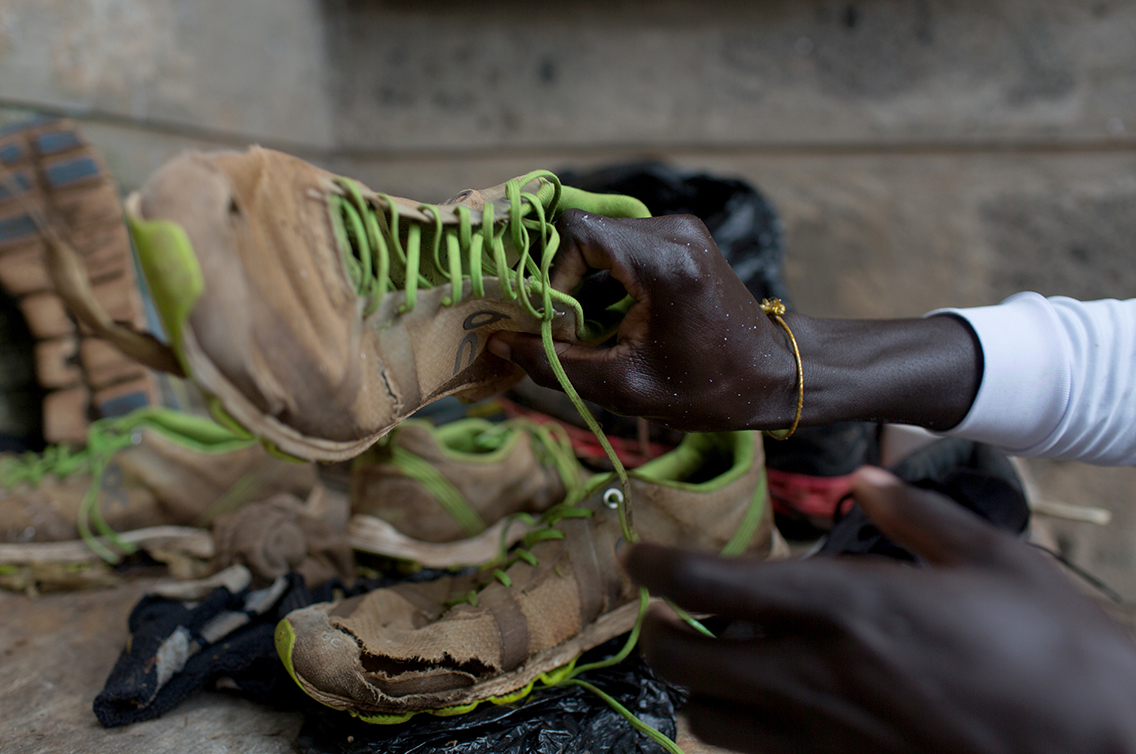 Paulo Amotun Lokoro (center left) and other members of the Refugee Olympic Team train at their camp outside Nairobi. The members of the team were selected after a series of competitive sporting events held in refugee camps in Kenya.

James Nyang Chiengjiek, 25, will compete in the 800-meter track and field event at the Rio Olympics in August. He left southern Sudan at age 13 to avoid being conscripted as a child soldier in the country’s civil war.

At the age of 10, Yiech Pur Biel fled starvation and disease in his war-torn village in what was then southern Sudan. He has been a refugee in Kakuma ever since. The camp is home to over 180,000 refugees from nearby countries, including South Sudan, Ethiopia, Somalia, and the Democratic Republic of the Congo.

A runner from the 10-person Refugee Olympic Team warms up before training.

Runners on the Refugee Olympic Team train at their camp on the outskirts of Nairobi.

The Refugee Olympic Team includes 10 refugee-athletes from Syria, South Sudan, Ethiopia, and the Democratic Republic of the Congo.

An athlete walks through the dormitory at a local orphanage where most of the team lives while they train for the Olympics.

Long-distance runner Guston Nzazumukiza, 22, from the Democratic Republic of the Congo, checks sports scores on his phone during a break.

Anjelina Lohalith, a refugee from South Sudan, gets measured for her uniform. She will compete in the 1,500-meter event in Rio.

Athletes go through a pair of shoes every six weeks running on Nairobi’s rocky and muddy roads.

Biel, who was 20 at the time, had never run competitively before the trials that were held in Kakuma in August, but he decided to give them a shot. “I was playing football by that time,” he said. “But most of the people, they are trying the race, and I decide to try my luck.” He finished near the top of the 10-kilometer race and was one of the initial crop of about 20 runners invited for additional training. (After a series of cuts and additional trials, there are now about 30 athletes training in Ngong.)

Loroupe eventually told the IOC’s Bach about the runners her organization was gathering from Kenya’s refugee camps. According to Pkemoi, that conversation influenced Bach’s decision to form the Refugee Olympic Team. And suddenly, the runners in Ngong were competing for more than just a training opportunity.

Of the 12 athletes whose names Loroupe’s foundation ultimately submitted to the IOC for consideration, five were selected — all of them South Sudanese who had spent most of their childhoods in Kakuma. The remaining five members of the team include two internationally competitive swimmers from Syria who are living in Belgium and Germany, an Ethiopian marathoner training in Luxembourg, and two refugees from Congo, currently living in Brazil, who will compete in judo.

The team captures the breadth of the global refugee crisis. Victor Nyamori, the refugee officer with Amnesty International in Nairobi, credited the IOC with highlighting not just the plight of Syrians, but other crises, like the ongoing South Sudanese crisis, that often go underreported — and underfunded. A recently signed peace deal was supposed to end South Sudan’s civil war, but skirmishes continue. More than 750,000 people have fled the country since December 2013, some because of the fighting and some because of the widespread food shortages it created.

The UNHCR estimates that it will cost $637 million to meet the needs of all of those people this year. Halfway into the year, the agency has received less than 20 percent of that money. “The funding situation for this side of the world has been very low, especially for refugee operations,” said Nyamori, adding that he hopes the Olympic team “can bring a new focus to looking at this side of the global south in a better way for funding.”

Rose Nathike Lokonyen, 23, is a refugee from South Sudan who has lived in the sprawling Kakuma refugee camp in Kenya since 2002. She will compete in the 800-meter track and field event.

For his part, Biel is most interested in calling attention to the experiences that he and his new teammates share in common — both what they have had to sacrifice and what they still hope to achieve. “We shall meet as refugees, the 10 of us,” he said, ahead of the games. “We become one team. We are the eyes of the refugees.”

Their participation is a statement, but the Olympics is still a competition — and Rose Nathike Lokonyen, one of Biel’s teammates who is also training in Ngong, is determined to win.

During the team’s ceremonial introduction on June 3, Bach told Lokonyen’s story in detail. She became a refugee in 2002, arriving in Kakuma with her family at the age of 7. Her parents then returned to southern Sudan and left her to look after her four younger siblings. She eventually managed to complete her secondary-school education, but said life in Kakuma has been hard — hot, dusty, and with few opportunities for work.

When the trials were announced to earn a spot in the training camp, she was so eager to get out of Kakuma that she entered the 10-kilometer race even though she didn’t own a pair of running shoes. Barefoot, she finished second.

Now with proper equipment and 10 months of training under her belt, she plans to improve on that position in Rio de Janeiro.

“I expect to win,” she said. “But it depends on if I’m hardworking and how people compete.”

Determination aside, the South Sudanese runners will enter as significant long shots, competing against world-class athletes, many of whom have been training their entire lives. Still, Lokonyen is determined to prove she belongs.

“Being a refugee doesn’t mean you can’t do anything,” she said. “Most of the refugees have talent. They just don’t have the chance to express that talent.”

Andrew Green is a freelance journalist based in Berlin. Previously, he was based in sub-Saharan Africa for more than five years.