Bad action movies can be good sources for fraudulent spies.

If you thought the intelligence leading up to the Iraq war was bad, here’s something to chew over: British intelligence used fabricated information about Saddam Hussein’s chemical weapons program that appears to have been cribbed from the Michael Bay thriller The Rock. And, yes, that’s a true sentence.

On Wednesday, the Iraq Inquiry Committee released its long-awaited and just plain long report — it weighs in at 2.6 million words and is better known as the Chilcot Report — on the United Kingdom’s decision to join forces with the United States and invade Iraq in 2003. The report provides a damning picture of Prime Minister Tony Blair’s conduct in the run-up to the war and the use and abuse of intelligence in making the false case that Hussein had weapons of mass destruction.

“I express more sorrow, regret and apology and in greater measure than you can know or may believe,” Blair said Wednesday for what he described as a war launched in good faith on bad intelligence. Still, he defended the decision to invade. “I believe we made the right decision and the world is better and safer,” he said.

But amid the sprawling report, in sections 4.2 and 4.3, we find the rather amazing story of how British intelligence came to believe a source wh appears to have been a fan of one of the all-time great bad action movies and used it to dupe London’s spies.

In The Rock, Nicolas Cage and Sean Connery team up to stage an assault on Alcatraz, the famed prison island in the San Francisco bay. Inside, a renegade Marine General has taken hostages and set up rockets loaded with VX nerve gas. The general, played by Ed Harris, threatens to launch the rockets at the city if he and his men aren’t paid a ransom of $100 million dollars.

The nerve gas stolen by Harris and his men was famously stored in cylindrical glass containers. Those containers, which in the film hold a lurid green liquid, are used to great effect: the fragile spheres are bandied about and go skidding all over the place, as Cage, who plays an FBI chemical weapons expert, dives after them.

Deadly nerve gas typically isn’t stored in this way. That type of weapon is ideally stored in containers that break open when desired — rather than when they are accidentally dropped. But no matter!

On September 23, 2002 British intelligence issued a report from a source that MI6 chief Sir Richard Dearlove had described as having “phenomenal access” to Iraq’s biological and chemical weapons programs. That report claimed that VX, sarin, and soman — all nerve agents — had been produced at Iraq’s Al-Yarmuk facility. The nerve agents had been put in a variety of “containers,” one of which was “linked hollow glass spheres.” 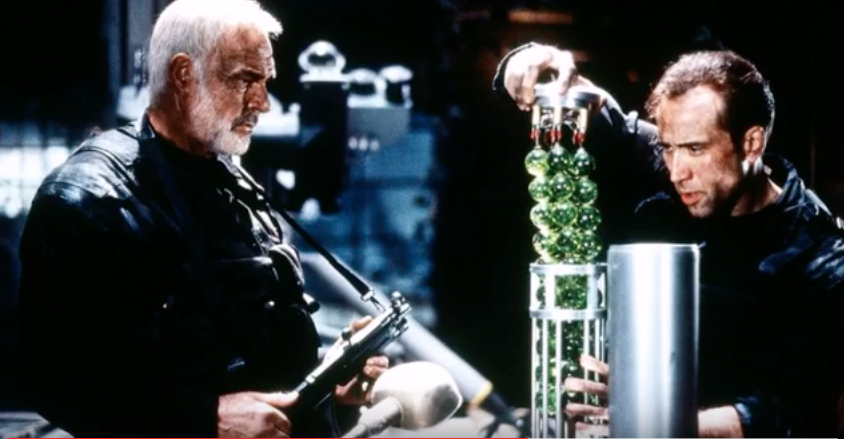 MI6 quickly realized the connection — but it was apparently not enough to immediately cast doubt on the source’s veracity. In October, the Chilcot Report says, “questions were raised” about the “glass containers,” noting that “they are not typically used in chemical munitions” and that “a popular movie (The Rock) had inaccurately depicted nerve agents being carried in glass beads or spheres.”

Despite these questions, MI6 gobbled up the information supplied by the source. On September 11, 2002, an MI6 report attributed to the same source claimed that Iraq had accelerated its manufacture of chemical and biological weapons, that it had built additional facilities for that purpose, and that Hussein wished to maintain to his chemical and biological weapons capability.

According to the Chilcot Report, that earlier report played a key role in the public case for war made by Blair and his lieutenants. The report of September 11 was used to reach “key judgments about Iraq’s chemical and biological weapons capabilities” in a government dossier published on September 24. That dossier “became the baseline for subsequent advice to ministers and public statements on the threat posed by Iraq,” according to the Chilcot Report.

As it turned out, the source that Dearlove had described as the key that would “unlock” Iraq’s biological and chemical weapons development, was a fraud. By December 2002, MI6 began to doubt the source’s credibility. By mid-February 2003, the “source had been revealed to have been lying,” according to the Chilcot Report.

Despite that assessment of February 2003 that the source had been lying, the reports issued on September 11 and 23 were consolidated into a summary report on April 3 and distributed more widely within the British government.

In March, the U.S.-led coalition invaded Iraq, and in its aftermath British intelligence was able to track down the alleged source of what we know now was fabricated information. The individual who had peddled the claims about VX stored in glass spheres told British spies that he was being supplied with that information by a person who had worked on the Iraqi chemical weapons program prior to 1991. Following the invasion, British spies met that so-called “sub-source.” He “denied that he had provided any of the material attributed to him.”

The source, MI6 concluded, “was a fabricator who had lied from the outset” — and in so doing helped embroil the UK in war.