On the streets of Cleveland, armed protesters, police, and skeptical Clevelanders gather outside the Republican National Convention. 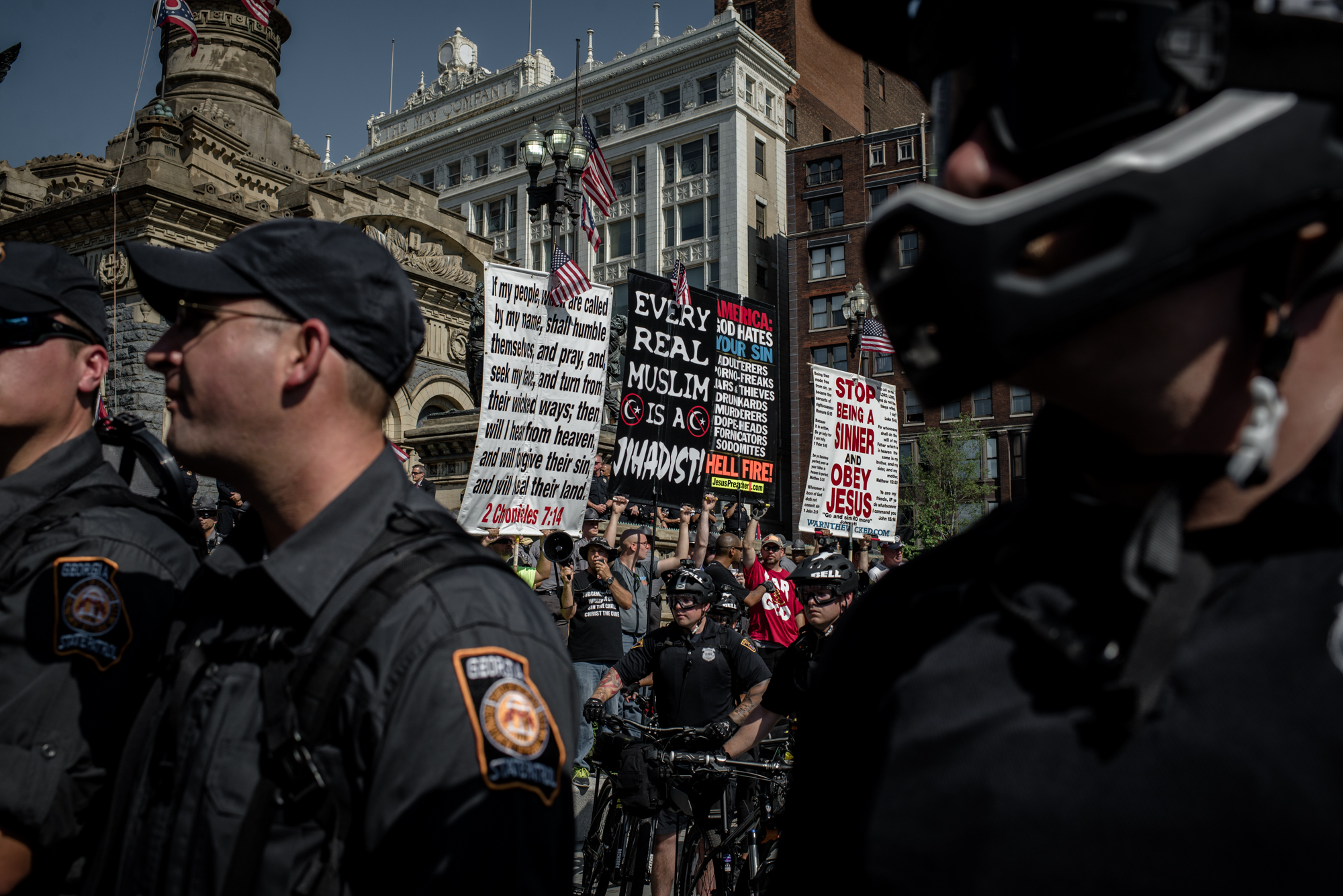 CLEVELAND — In Cleveland’s Public Square, Mark Steven, a 59-year-old white man from Anaheim, California, stood shouting next to fellow members of the Bible Believers, a group that has been espousing what can only be described as hate speech. Steven had come to Ohio for the four-day Republican National Convention that started Monday, July 18, to “lift up the banner of God, to lift up Jesus Christ to a lost and fallen nation.” Aside from his religious motivations, Steven was also there to represent his positions on refugees and immigrants. Syrian refugees, he said, would come into the United States “for the conquest of Western society. These people don’t love America; they love the freebies that come with it.” Next to Steven, a man held a sign that read: “Every real Muslim is a jihadist,” and he argued with the variety of people who stopped to confront him. 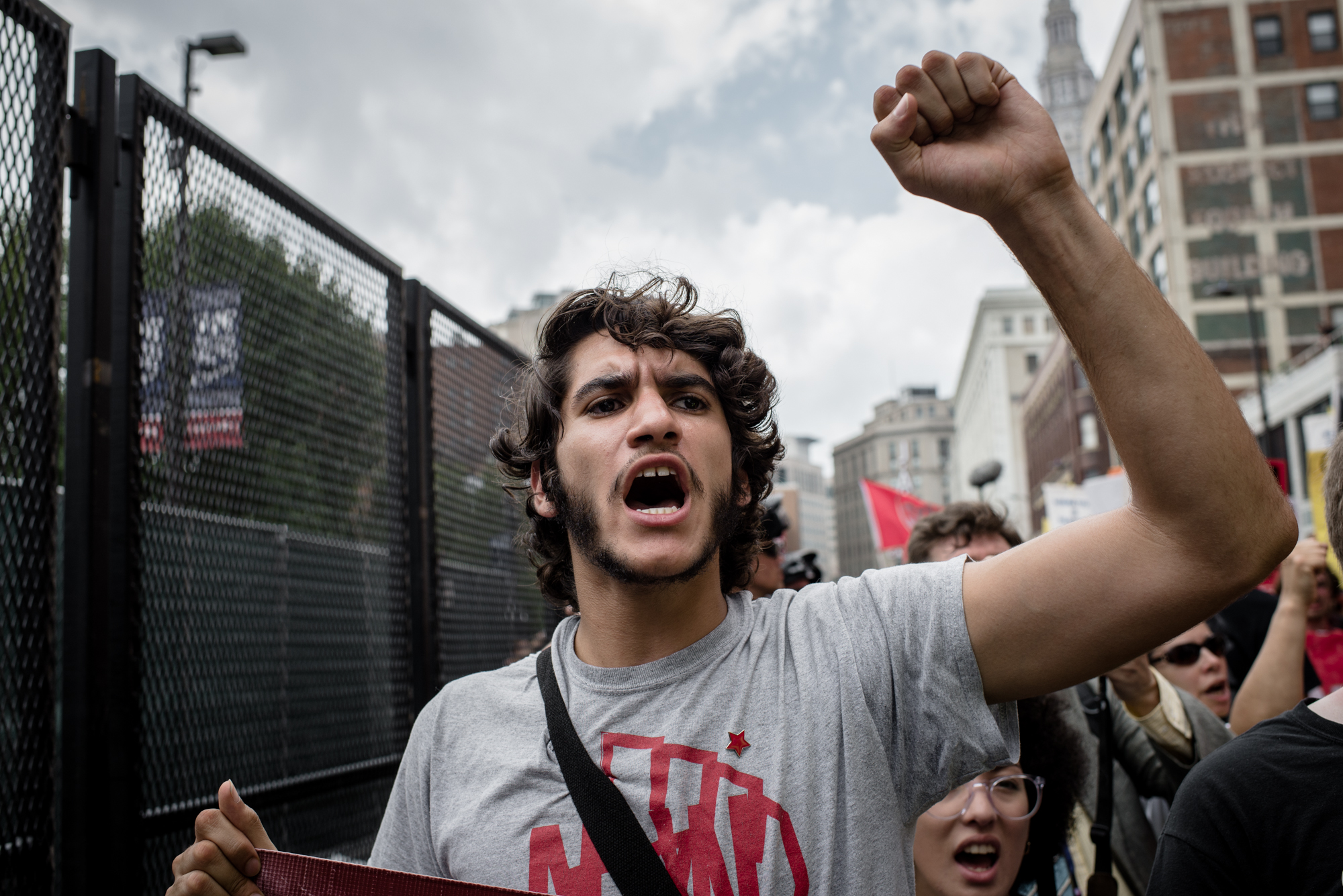 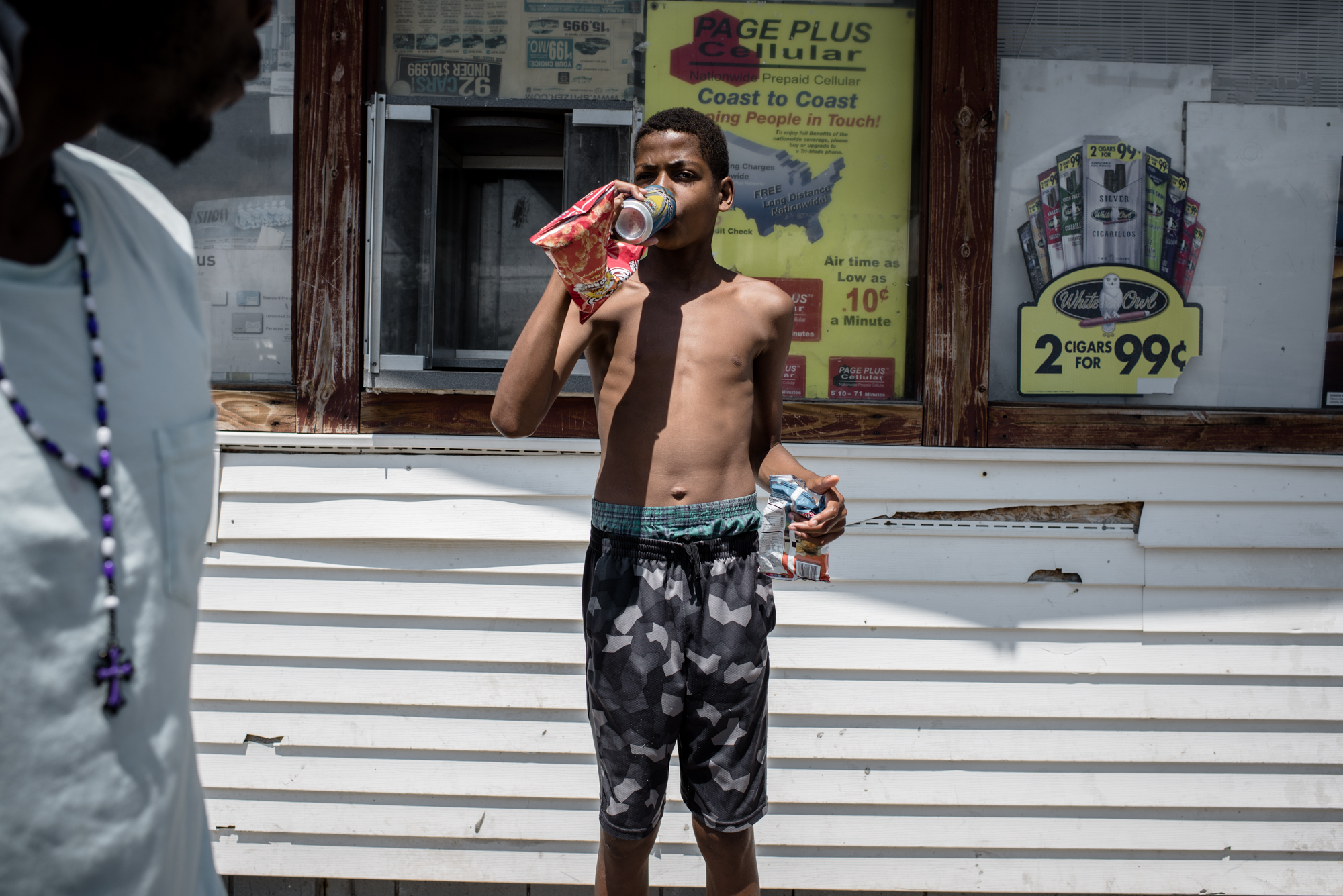 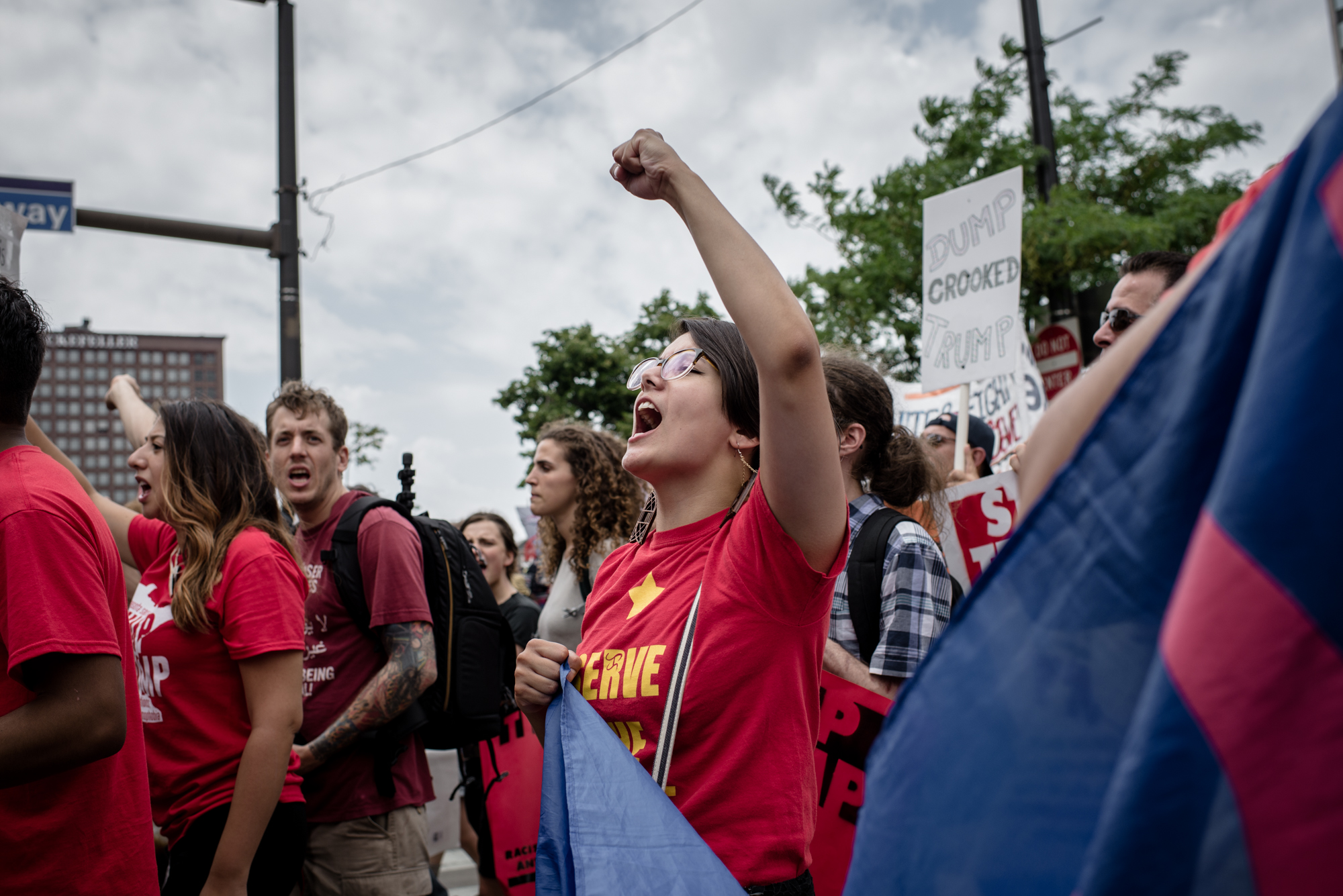 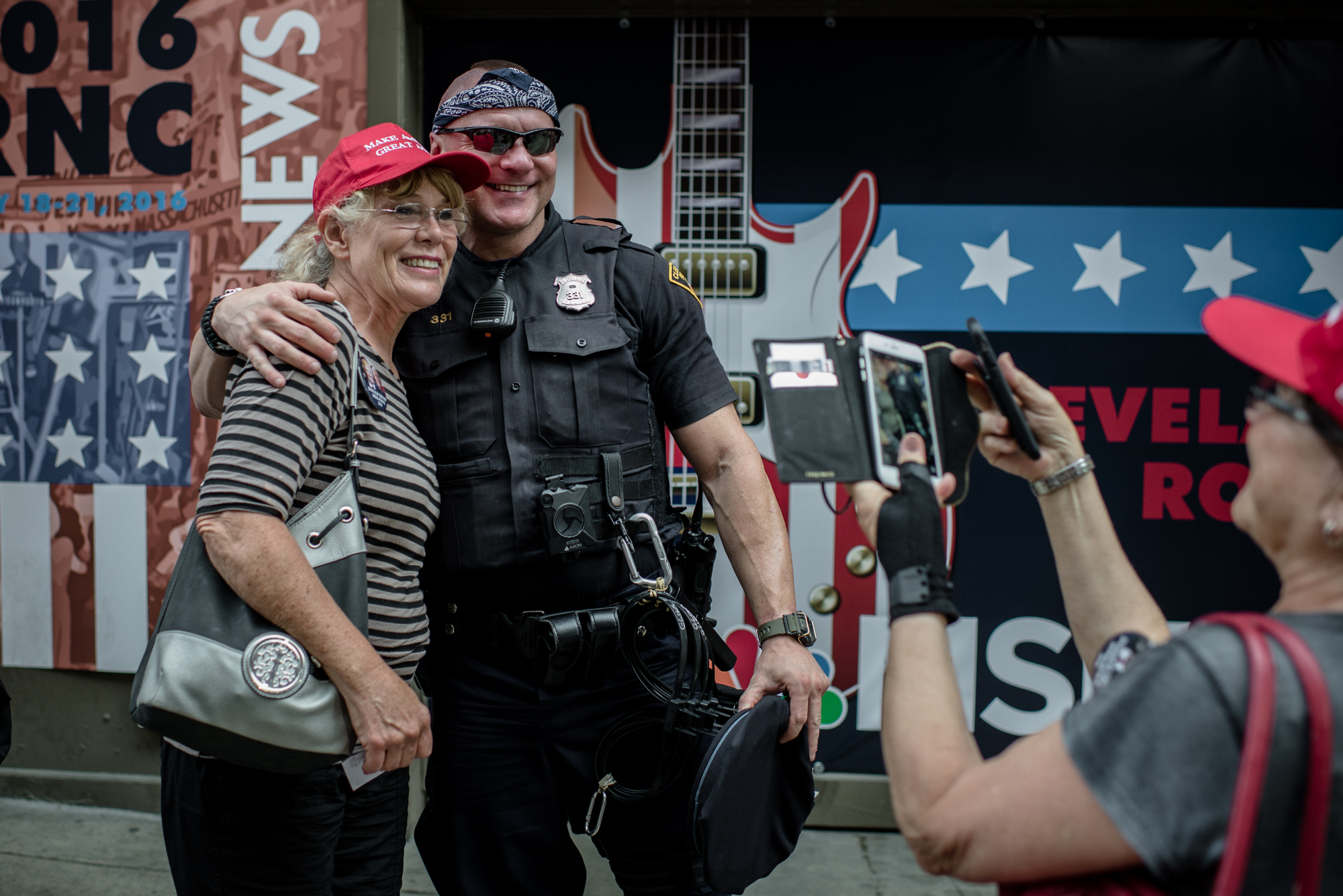 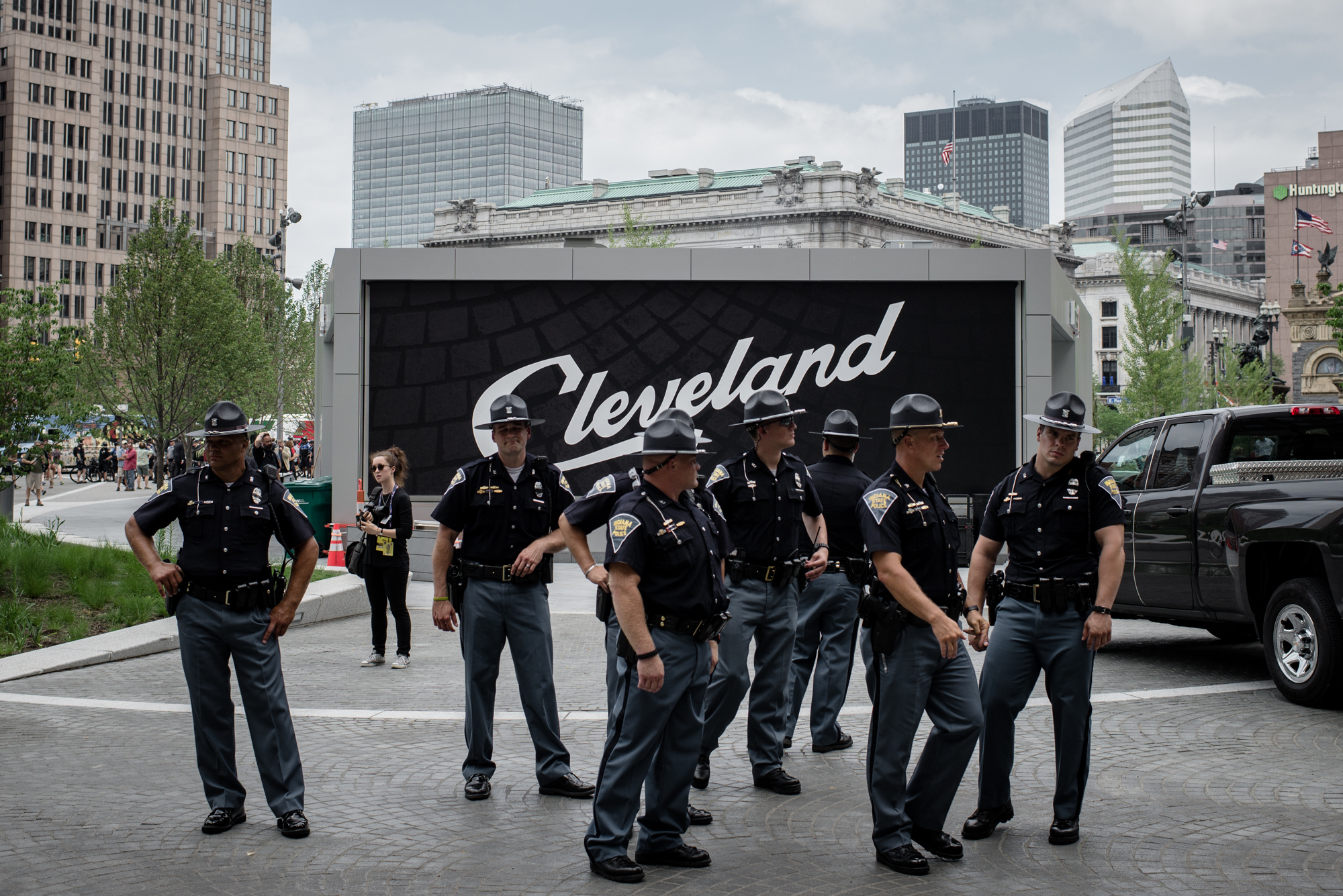 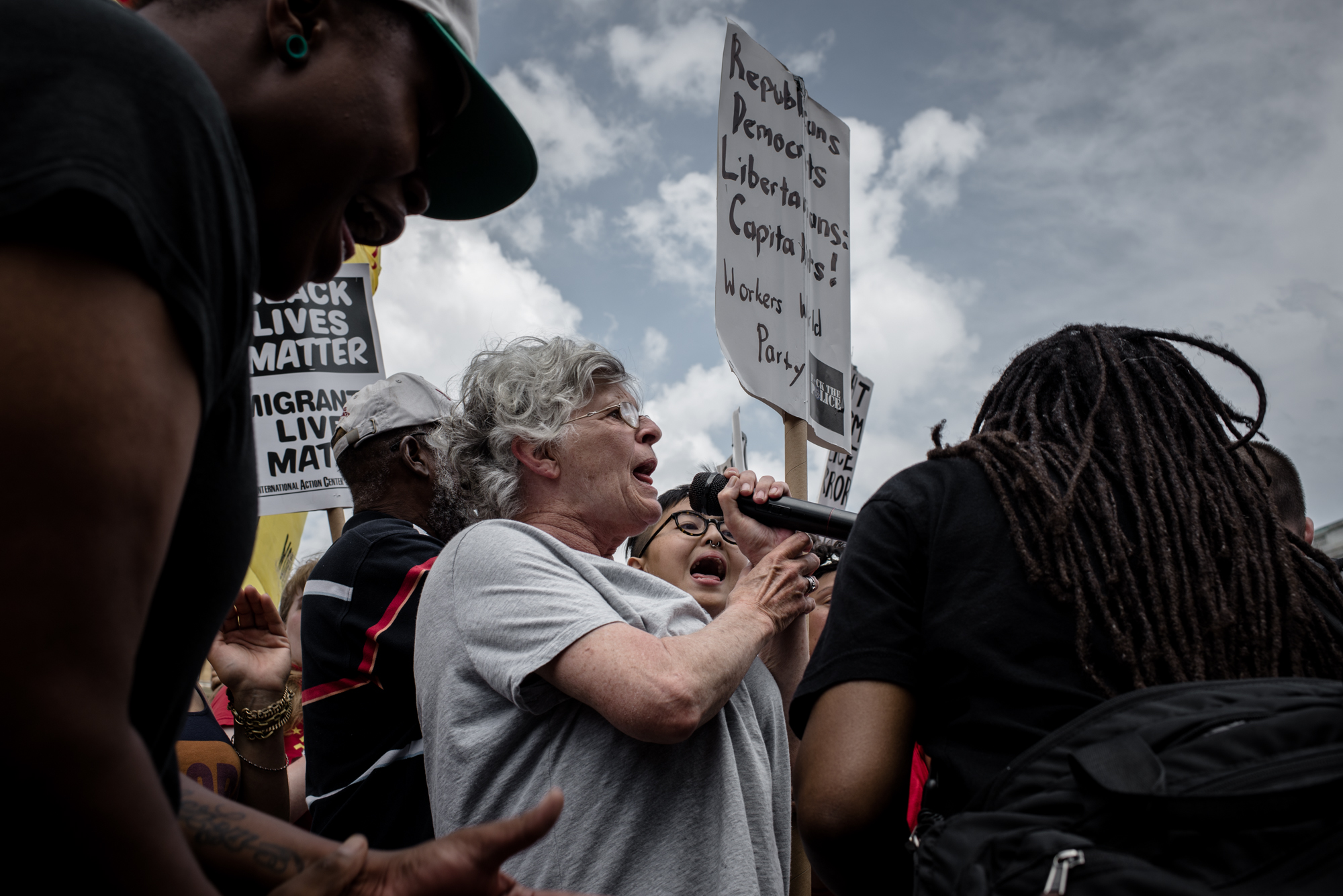 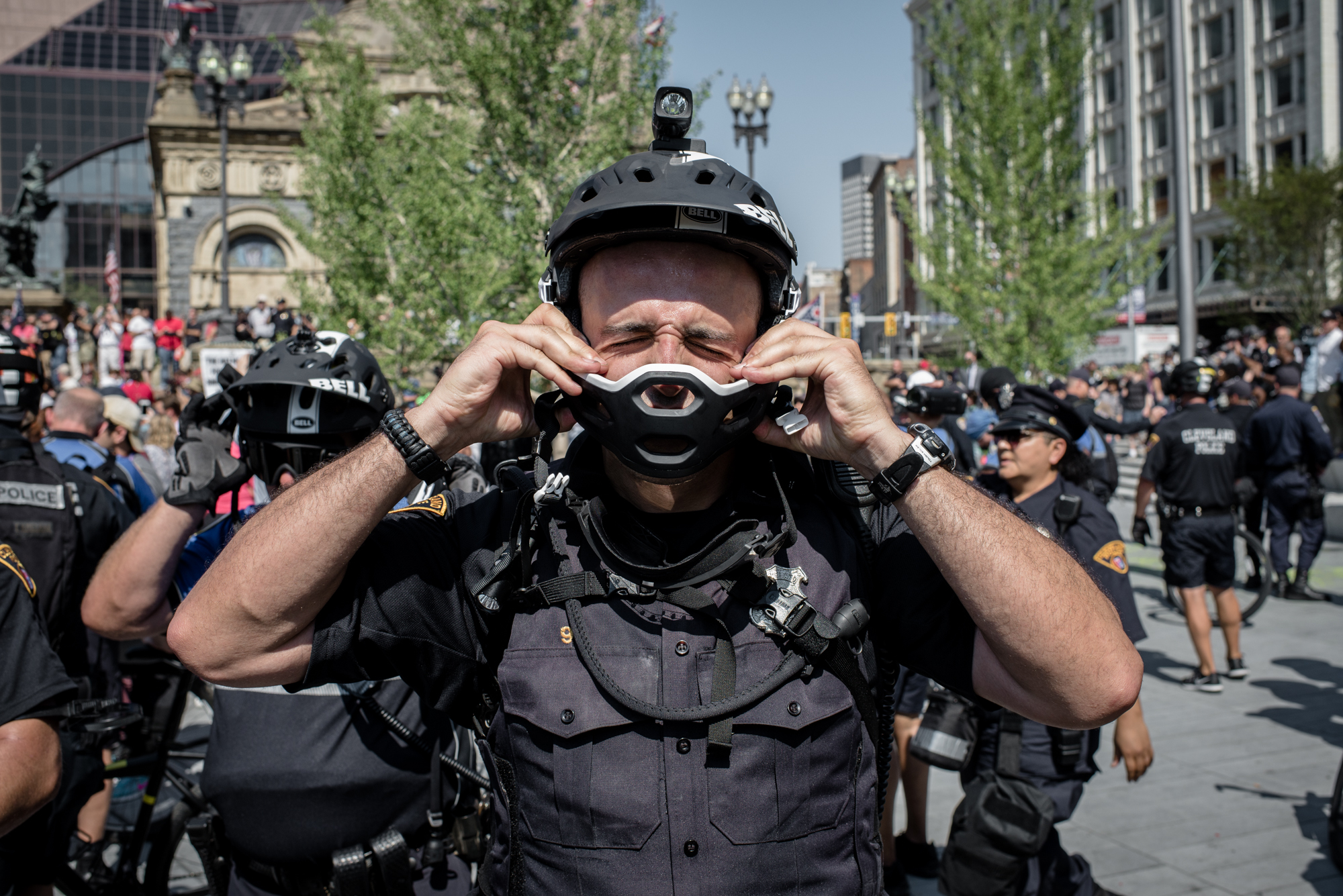 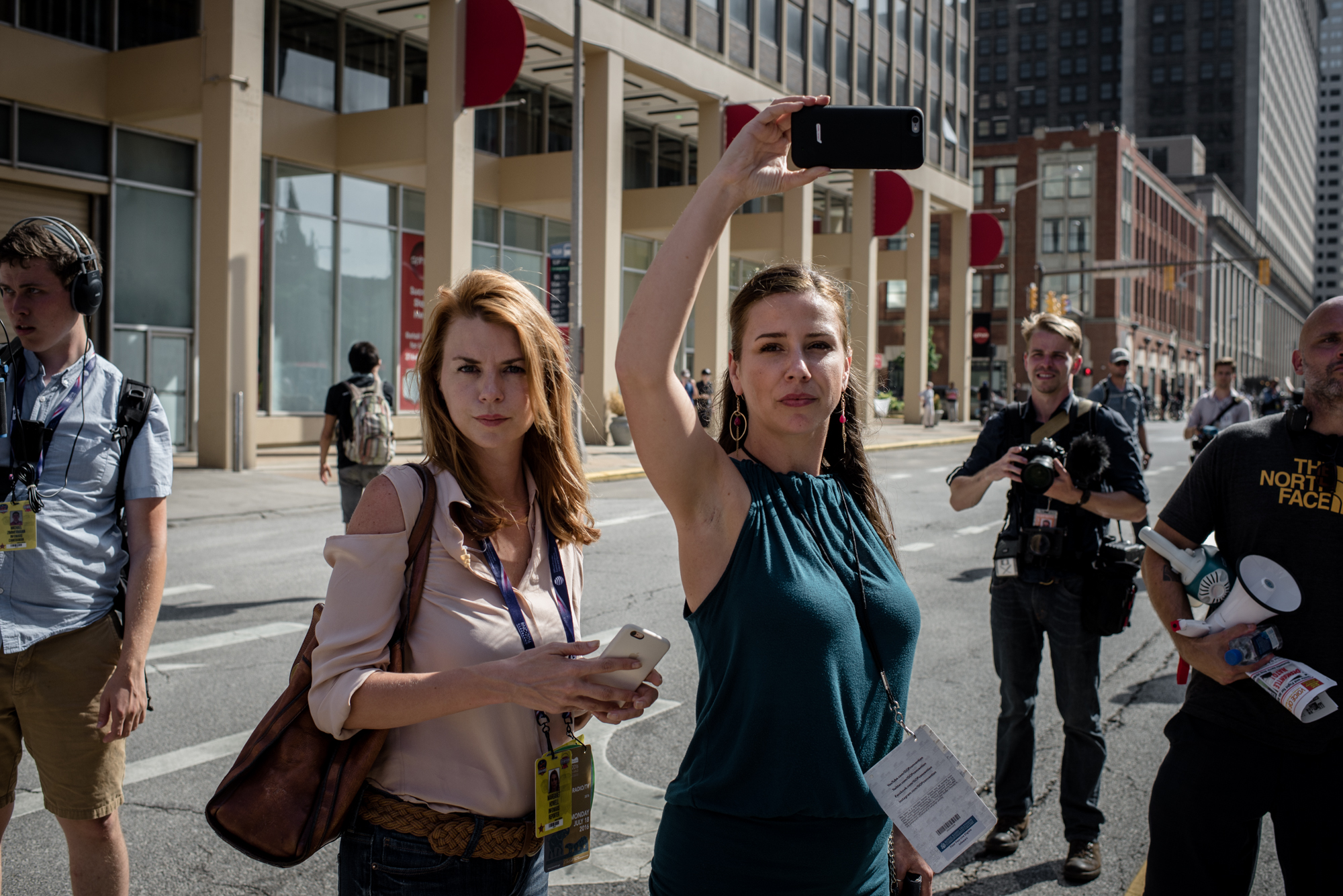 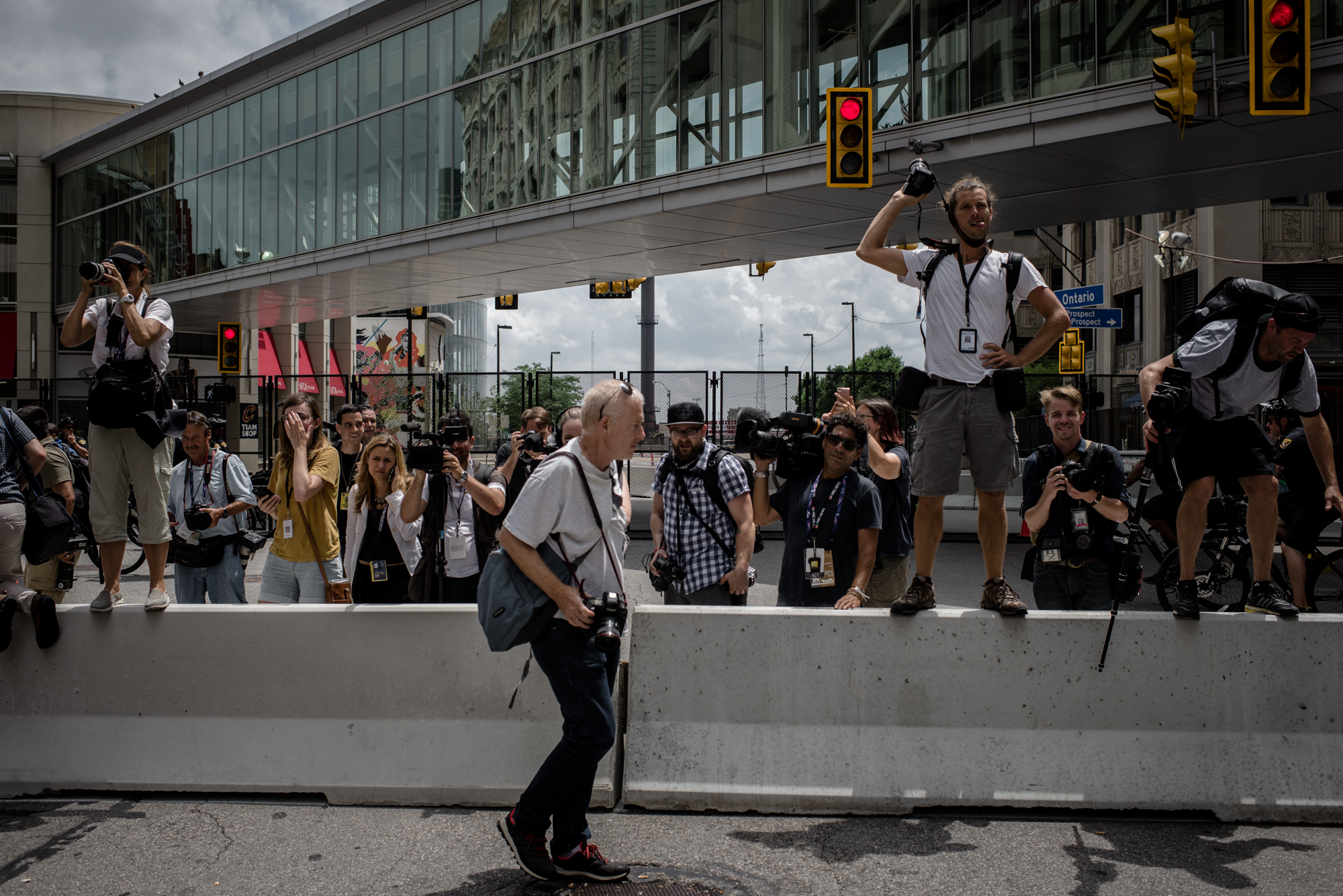 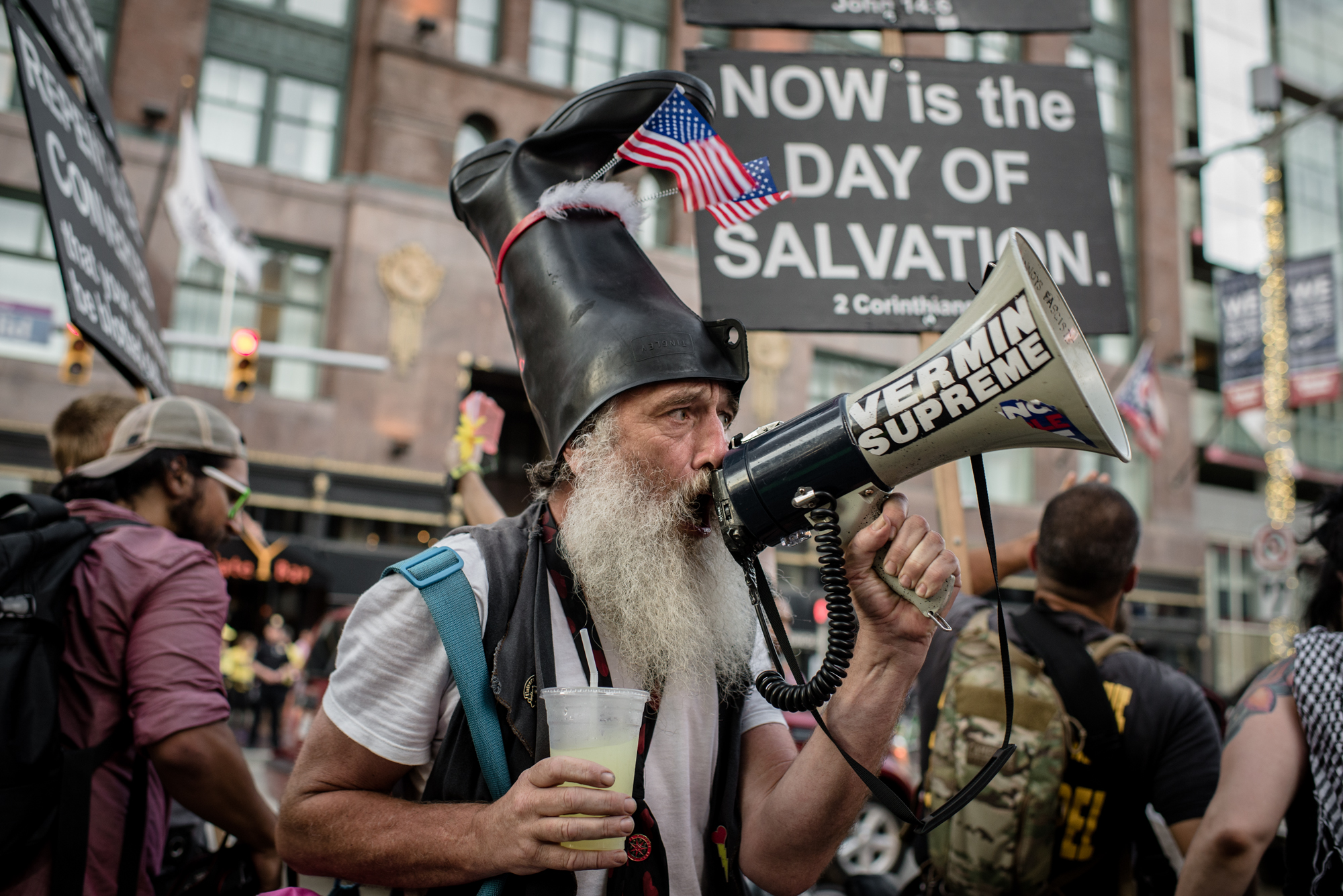 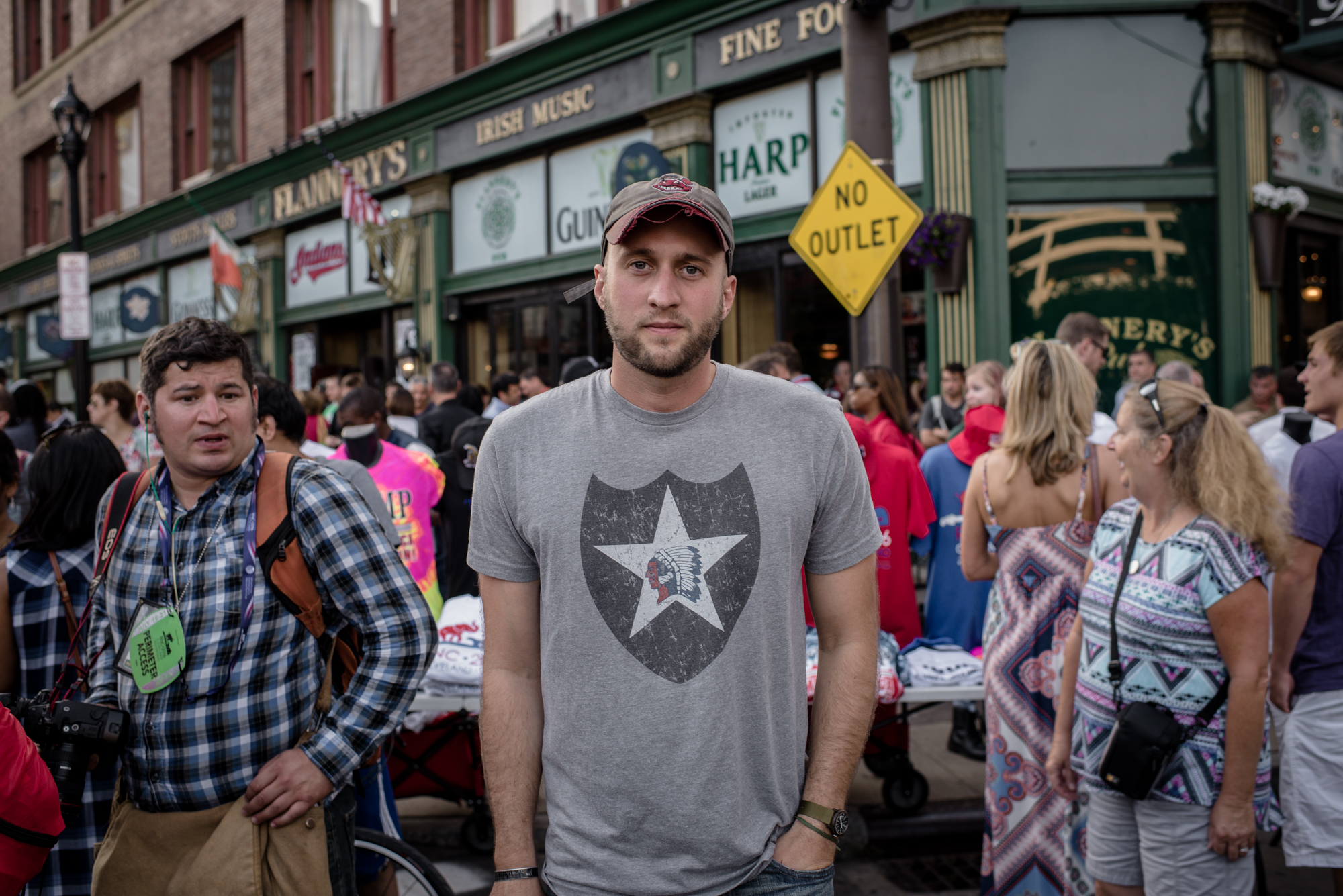 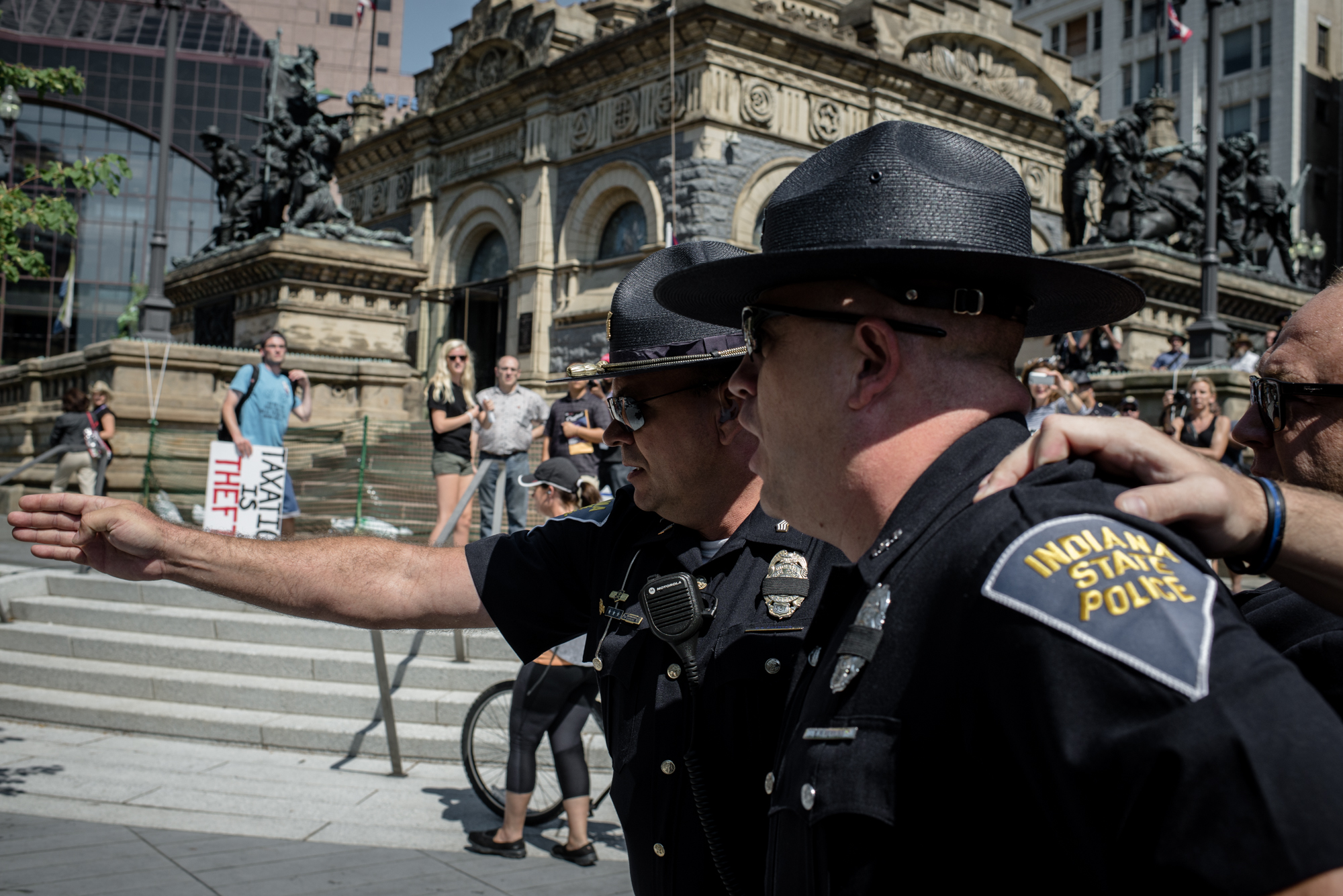 A protester raises his fist as he marches on July 19 in Cleveland.

A local boy drinks a can of soda at a gas station in the Central neighborhood of Cleveland on July 20. His father says Donald Trump is “the voice for the wrong people.”

A woman shouts during an anti-Donald Trump rally on July 19 in Cleveland.

A Cleveland police officer poses for a photo with a Donald Trump supporter on July 19.

Indiana State Police officers stand in front of a sign in downtown Cleveland on July 19.

A women speaks into a microphone during a Black Lives Matter protest on July 19 in downtown Cleveland.

A police officer struggles to put on a helmet while preparing to clear Public Square of people during the second day of the Republican National Convention in downtown Cleveland.

A pair of women watch protesters walk by in Cleveland on July 19.

Photojournalists take pictures of an anti-Donald Trump protest on July 19 in Cleveland.

A 29-year-old Cleveland resident and Army veteran surveys the scene outside the Republican National Convention on July 20. He says he’d rather talk in-person with people who don’t share his political beliefs than post about them online. “There's so much that a smile or a handshake can do," he says.

Members of the Indiana State Police break up a confrontation between protesters and conspiracy theorist Alex Jones on July 19.

Anticipation for violent confrontations on the streets during the convention had been high, a result, in part, because of the heightened polarization of the 2016 election cycle, but concerns grew even higher following the police shootings in Dallas and Baton Rouge, Louisiana. The first two days of protests outside the Quicken Loans Arena ended peacefully with scant few altercations between dueling protests. (According to reports, there have only been three arrests.) That is likely a result of the massive police presence in the city. Helicopters, bikes, and mounted police officers, as well as Secret Service agents, have dotted nearly every corner of downtown Cleveland during the last two-and-a-half days.

As part of the security measures put in place inside the 1.7-square-mile “event zone” (which covers much of downtown Cleveland), the city issued a list of items prohibited inside the area, including water guns, light bulbs, coolers, canned goods, and tennis balls. Not banned from the area, however, are guns — and many of the hundreds of civilians gathered in downtown Cleveland these last two days could be seen in possession of firearms. A last-minute request by the head of Cleveland’s police union to Ohio Gov. John Kasich for a temporary suspension of the right to carry arms in the event zone was not granted. 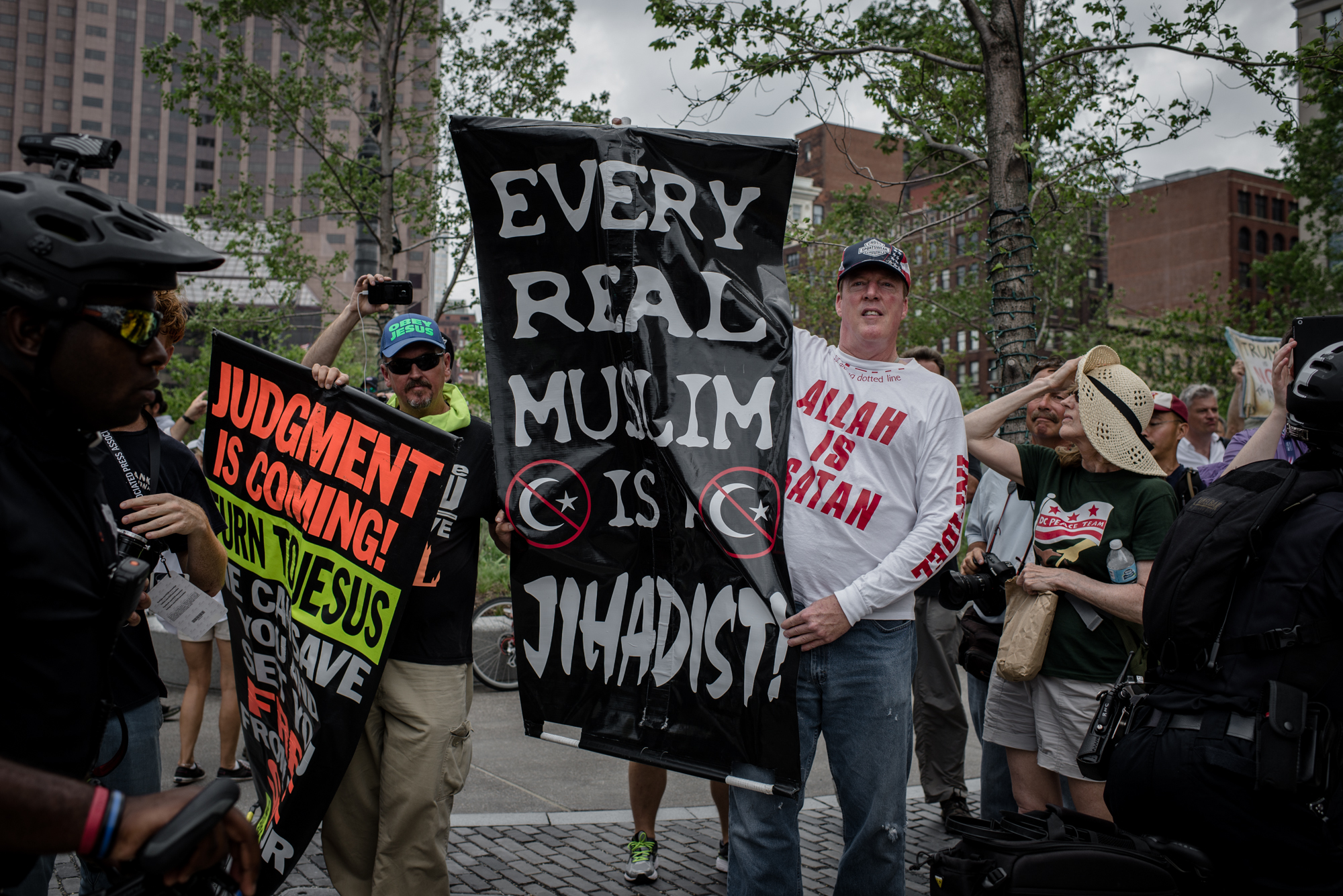 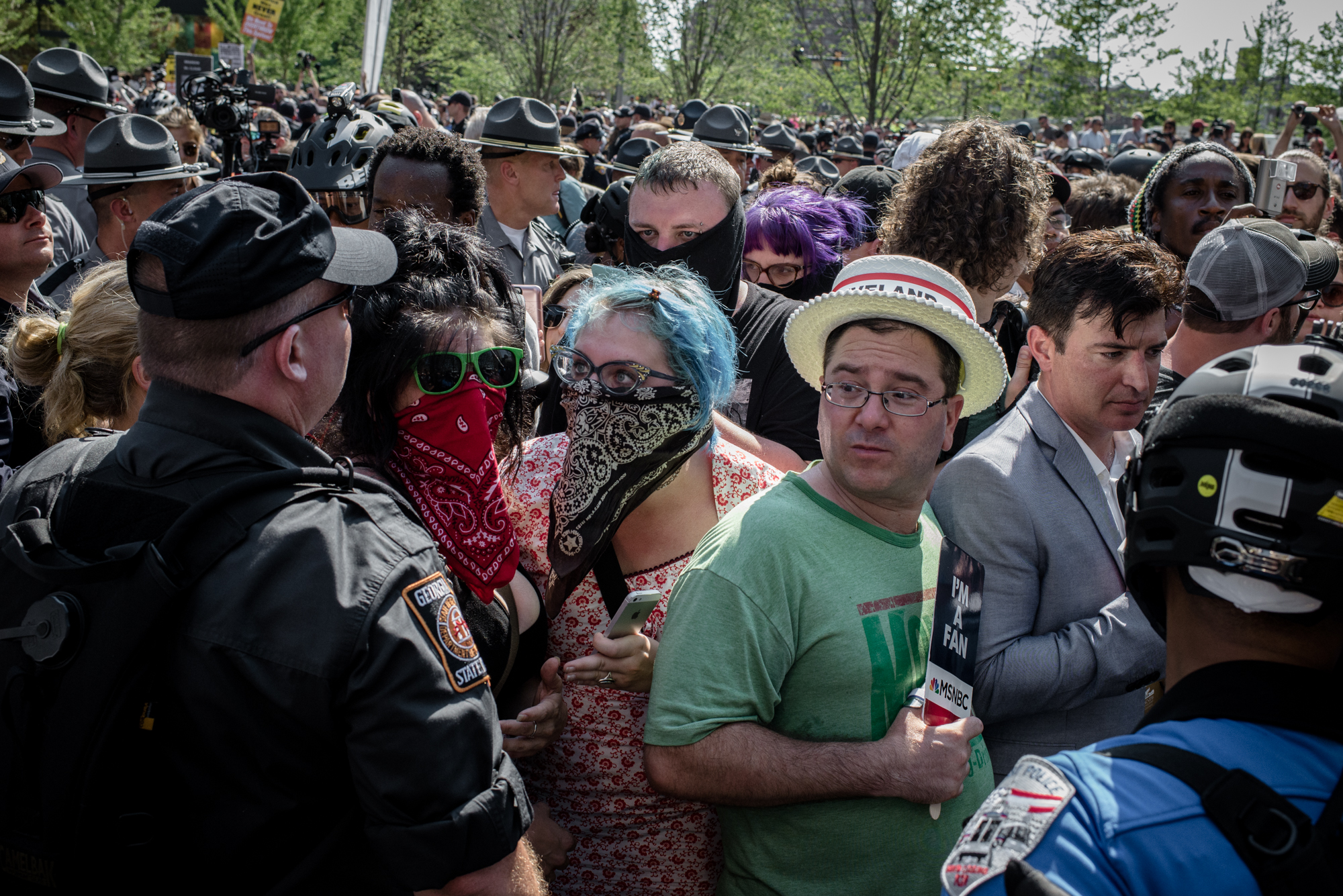 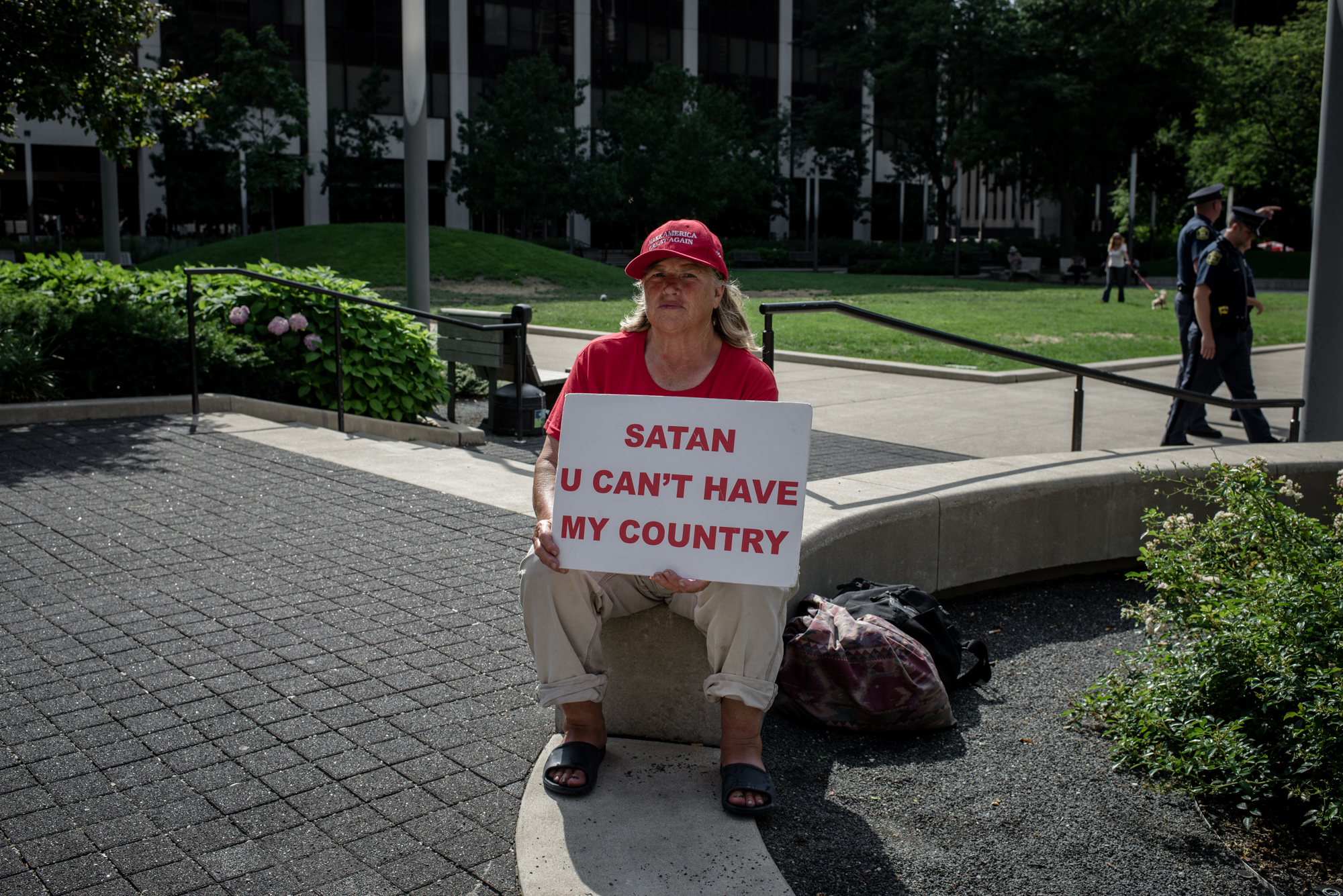 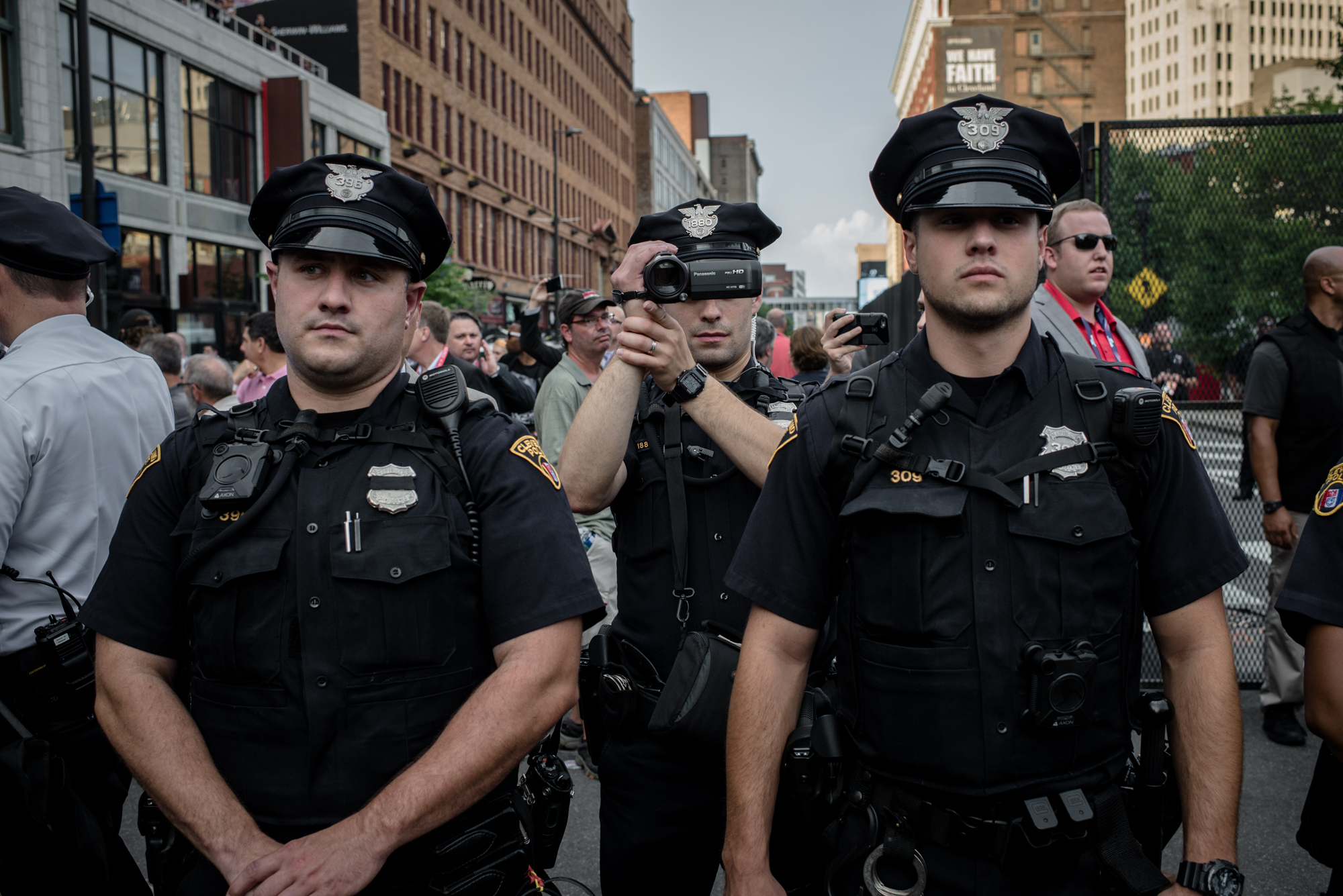 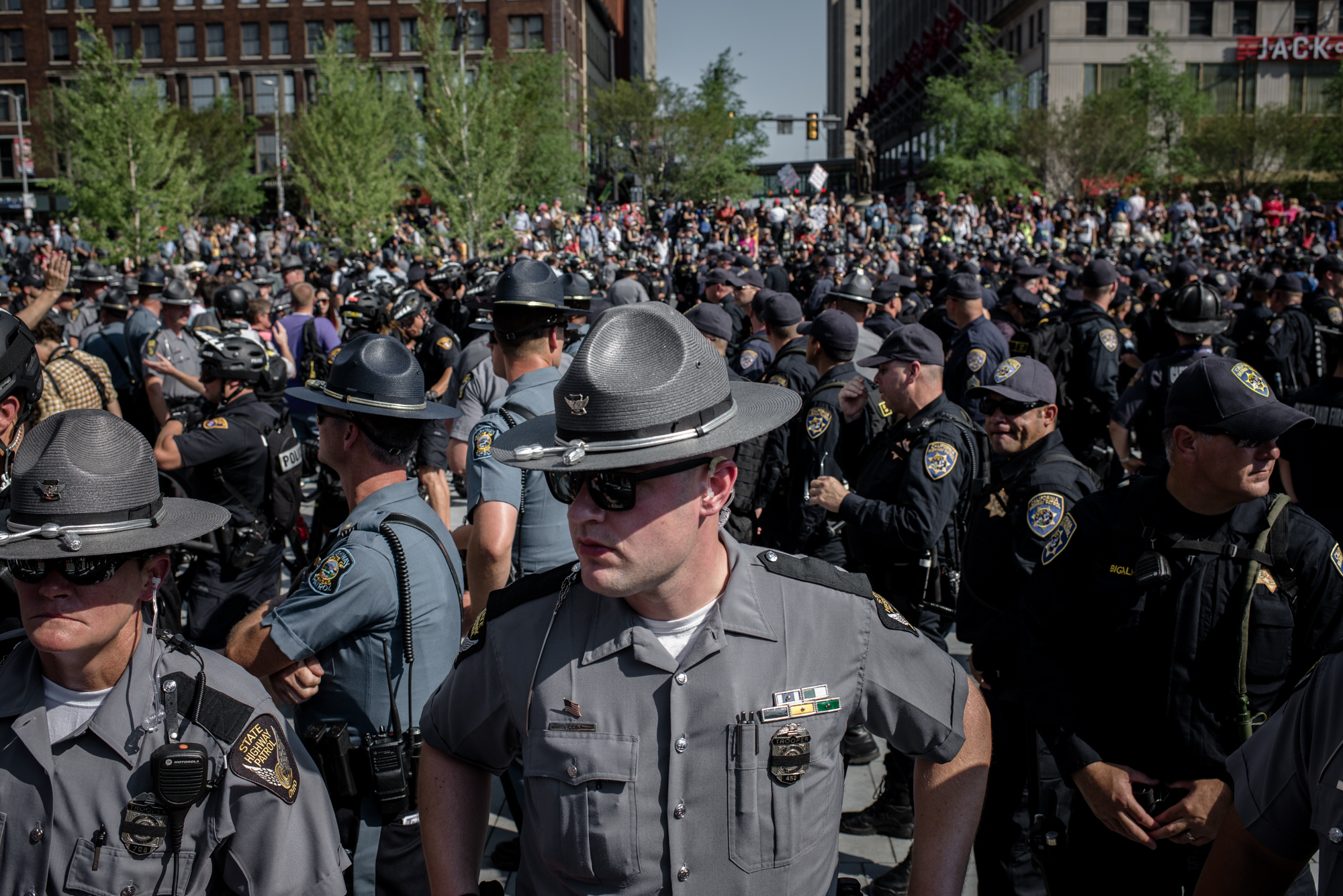 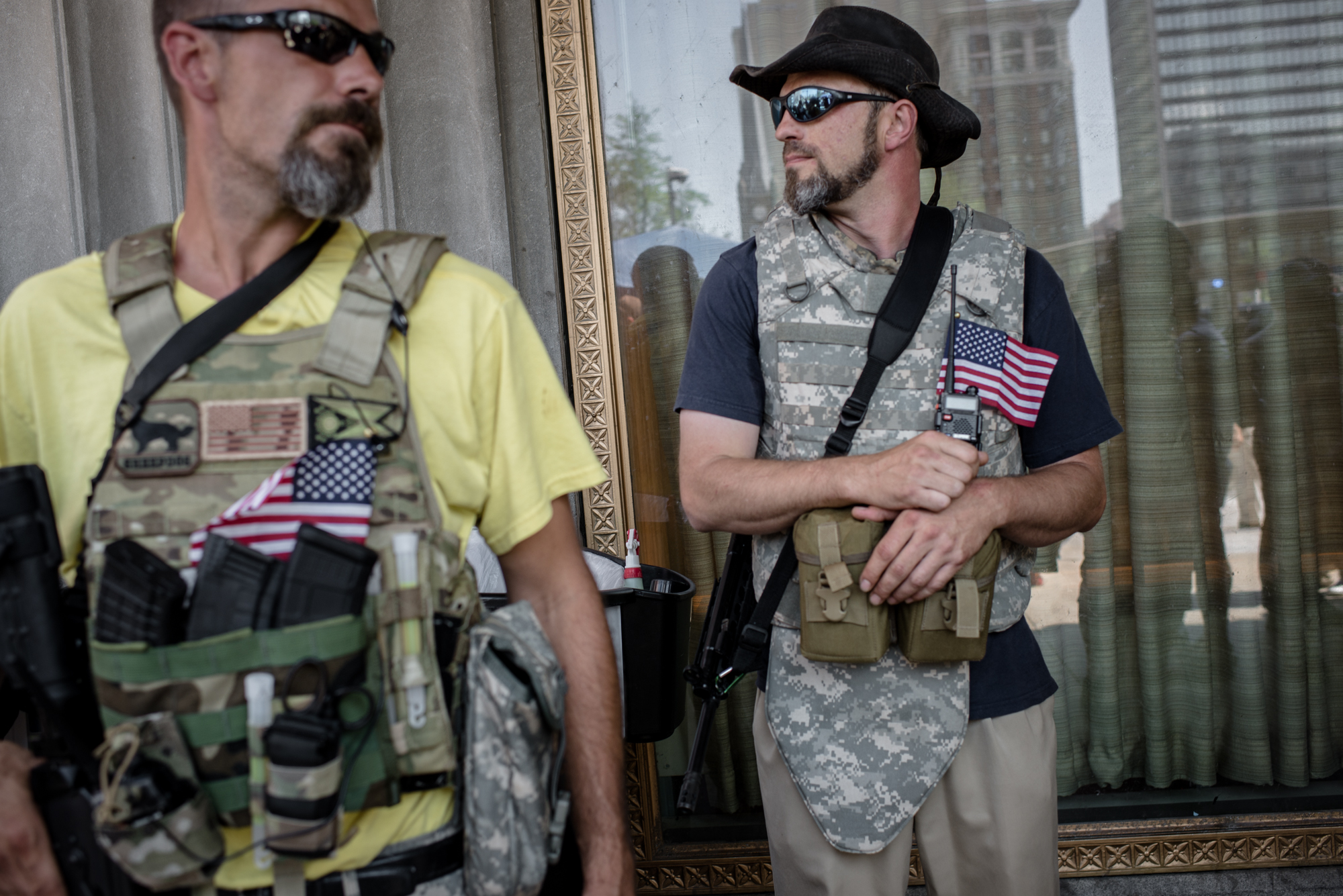 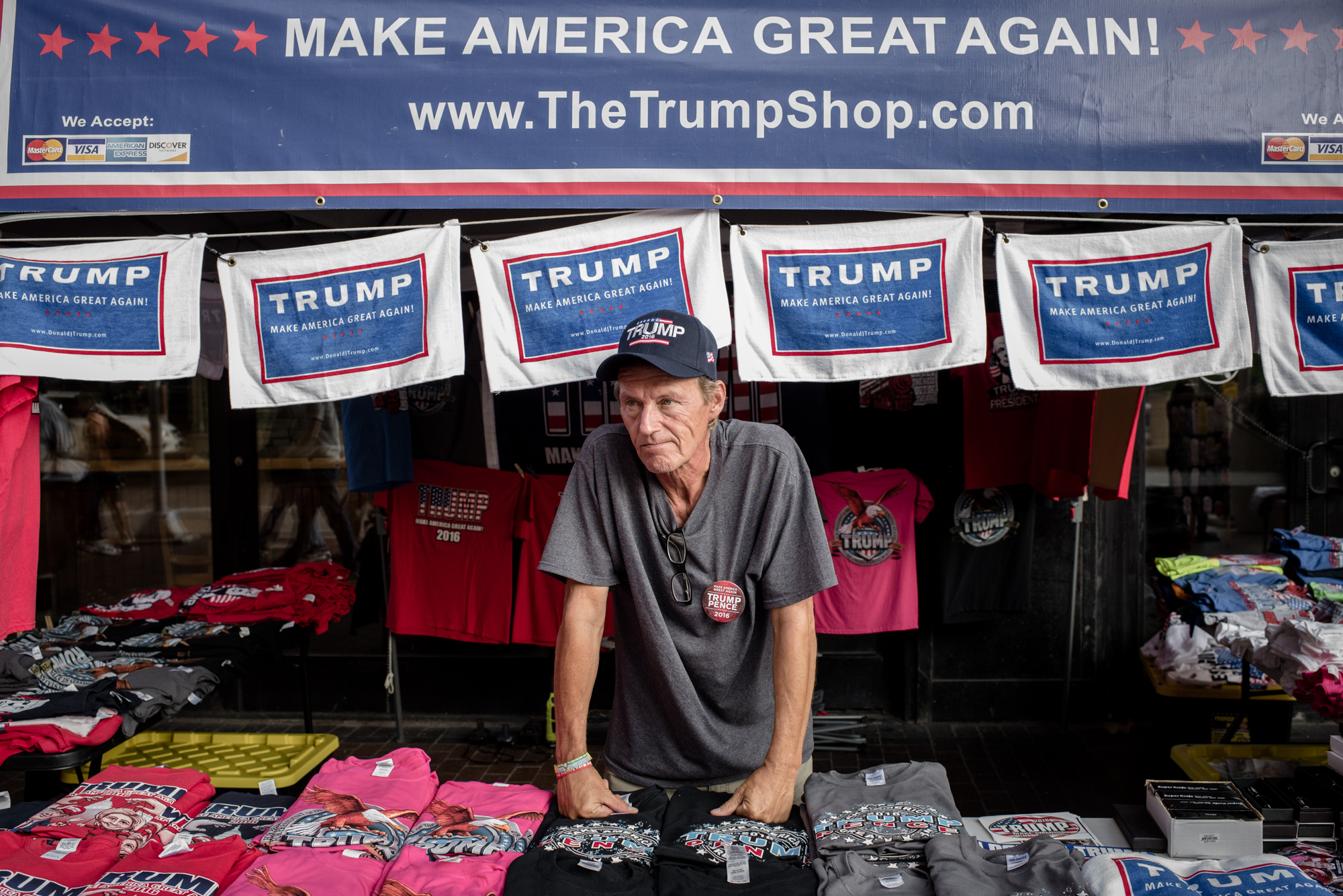 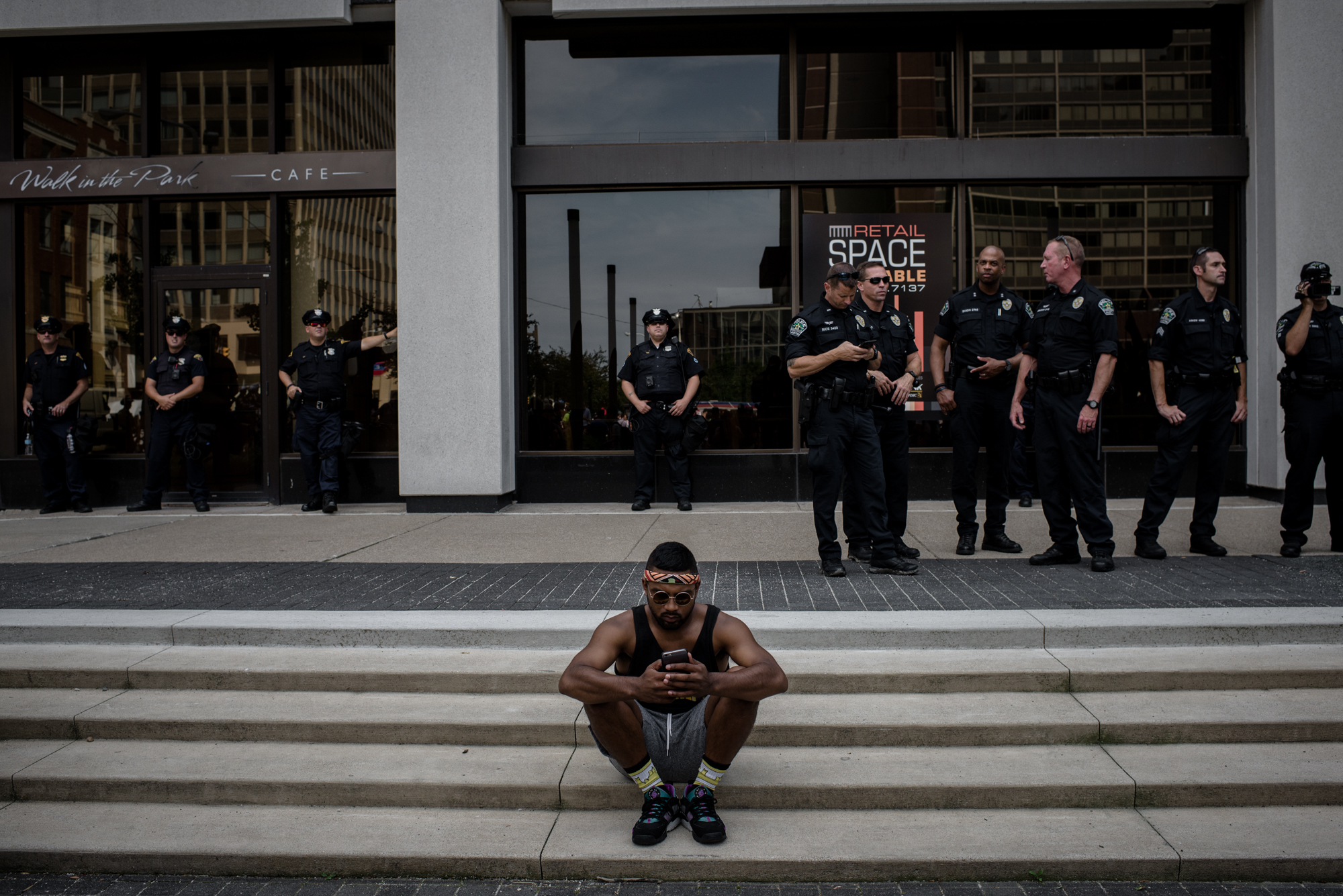 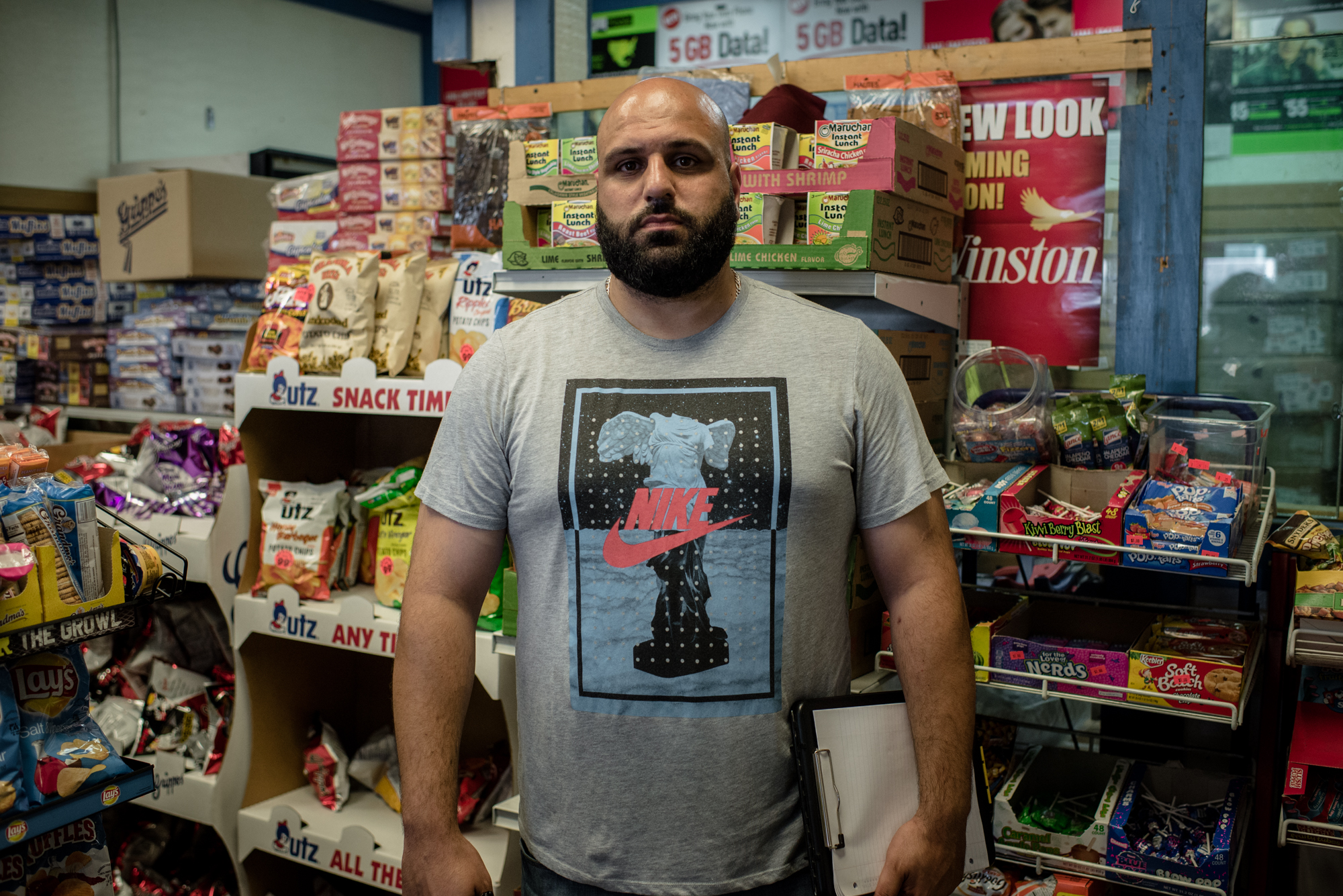 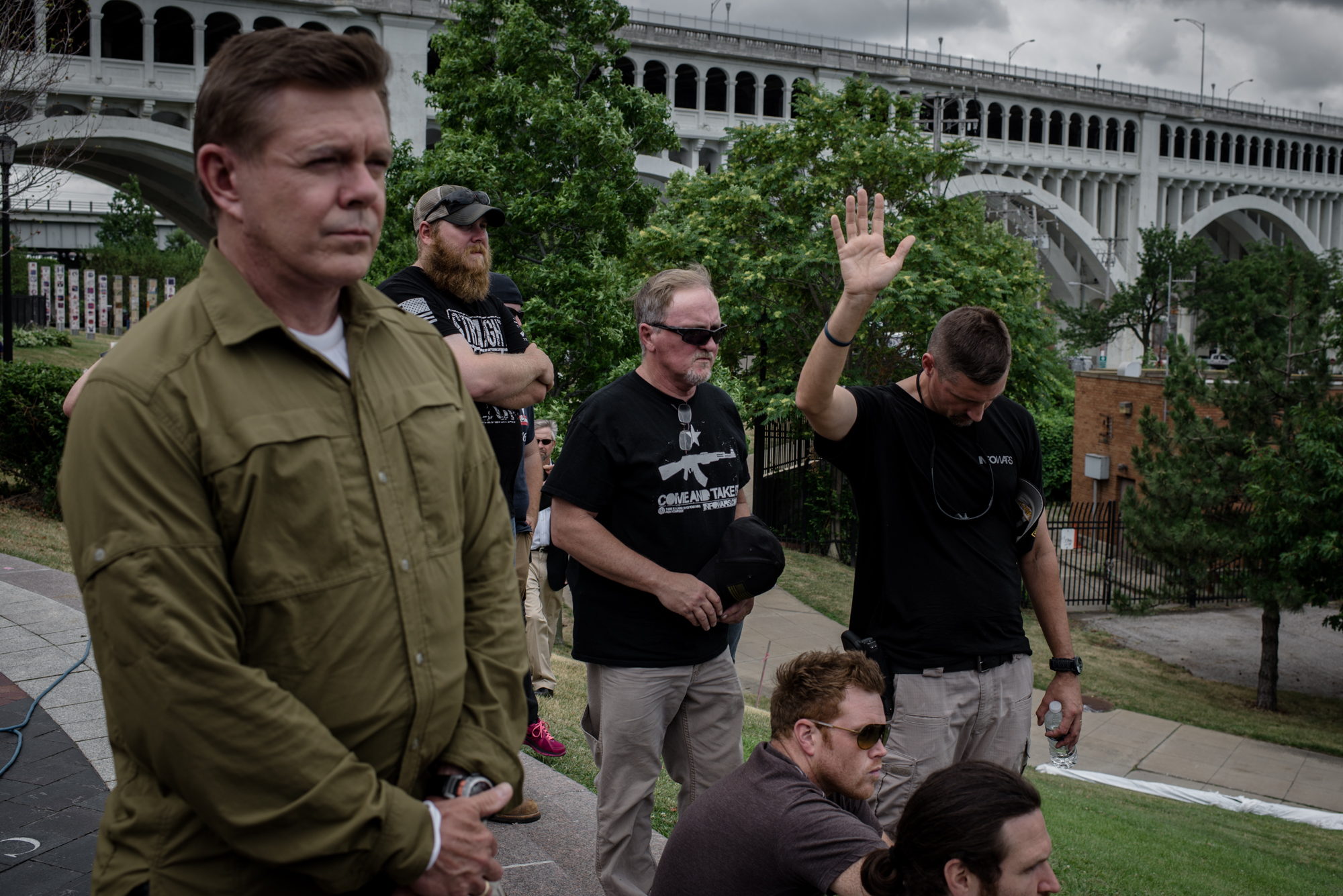 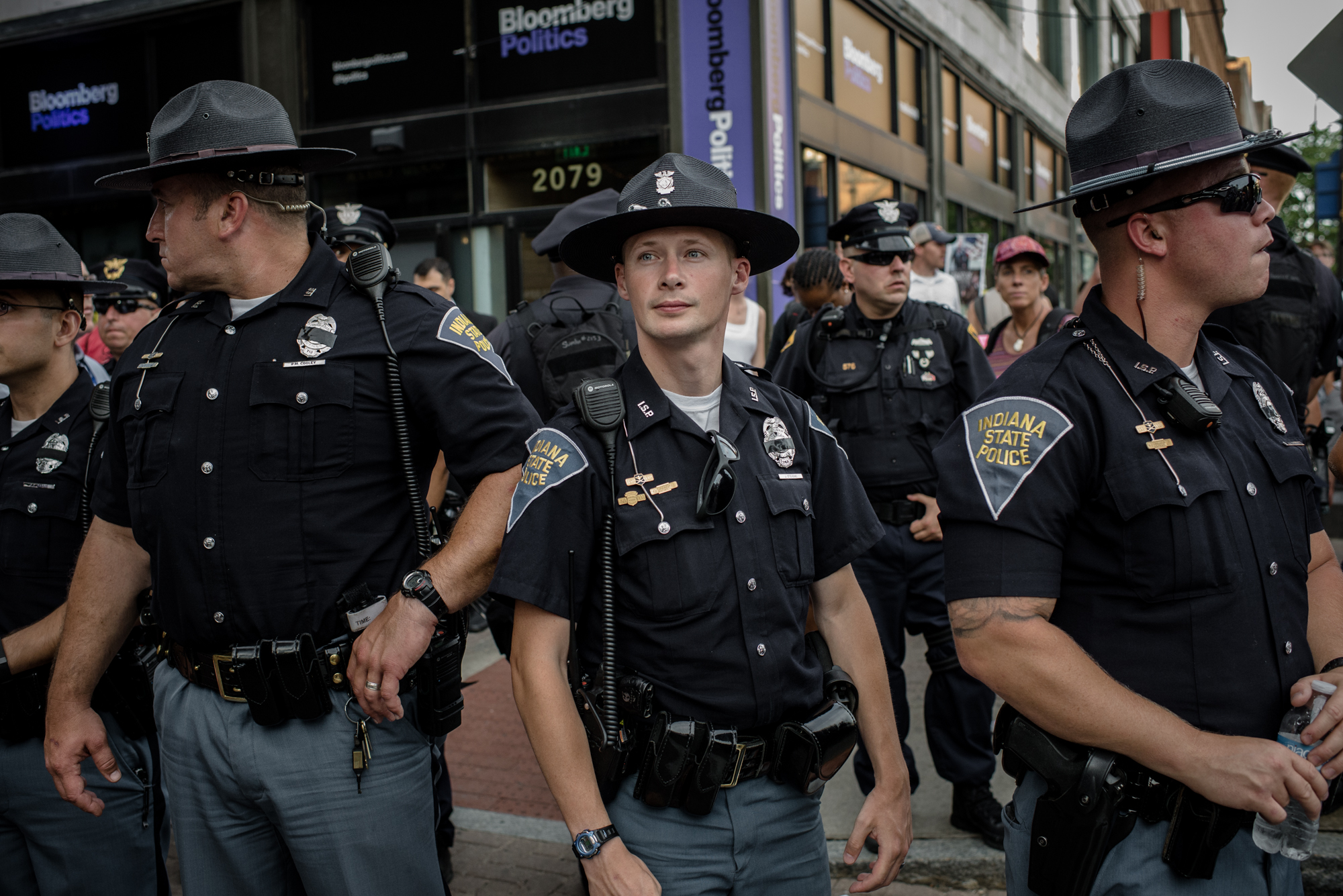 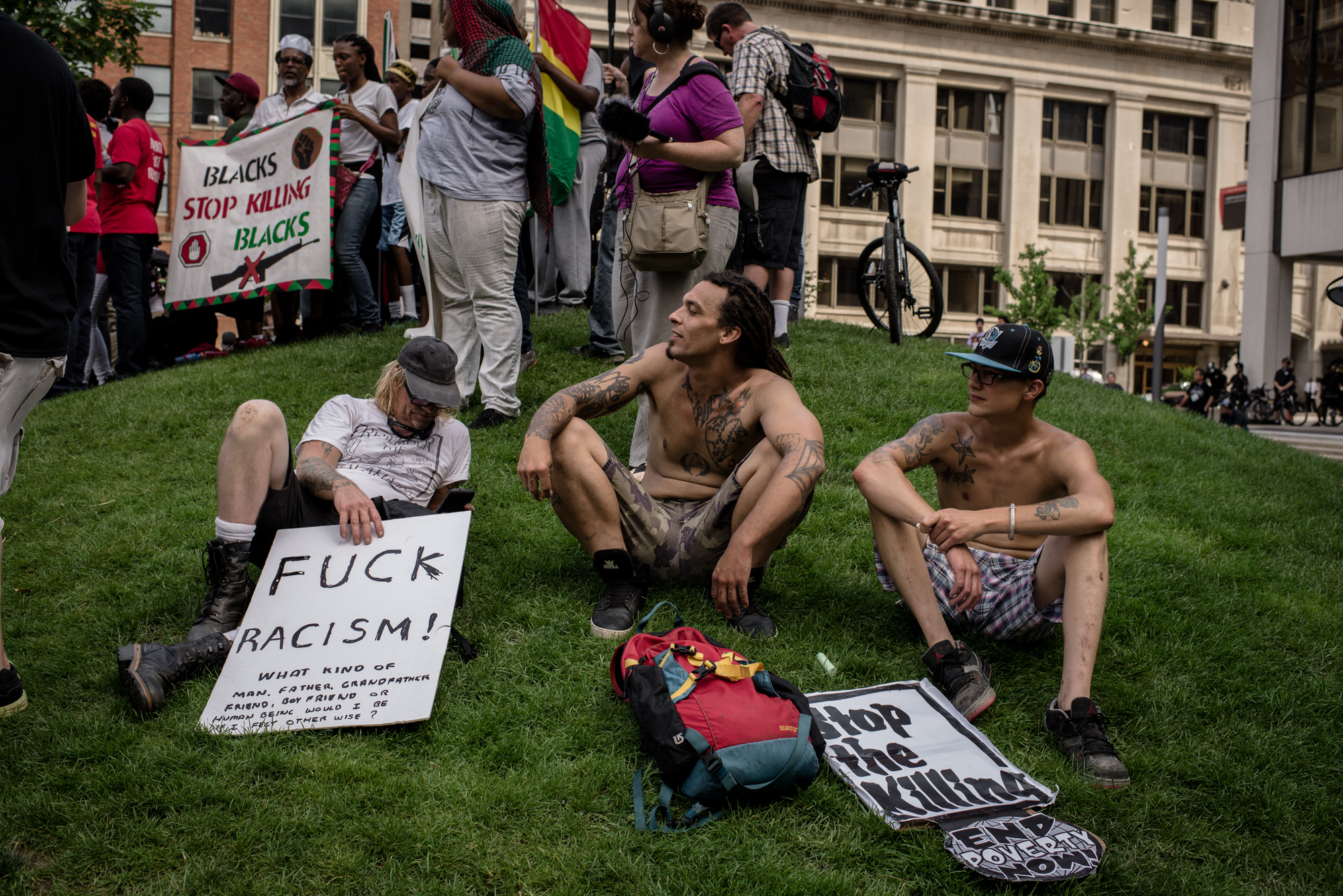 A man holds up a sign condemning Islam during the Republican National Convention, on July 19, in Cleveland.

A mix of police, protesters, and journalists gather in Public Square on July 20, at the Republican National Convention in downtown Cleveland.

A Texan woman who traveled by bus to show her support for Republican presidential candidate Donald Trump holds a sign at the convention in Cleveland on July 19. “He’s going to put law and order back in our country,” she says.

Police officers in Cleveland stand guard outside the Republican National Convention on July 19.

Highway patrol and city police officers mill about at a square in downtown Cleveland on July 20.

Members of the West Ohio Minutemen from Lima, OH, in downtown Cleveland.

A salesman of Donald Trump merchandise stands behind a sidewalk-vending stall in downtown Cleveland on July 20.

A man checks his phone near the Republican National Convention in Cleveland on July 19.

A first-generation Palestinian-American, who works for a distribution company, poses for a picture on July 20 at a convenience store in Cleveland. He says he’ll be voting Democrat this year because he feels “the Democrats care more about the little people.”

Men — some of whom were carrying handguns — pray during a rally supporting Donald Trump.

Officers from the Indiana State Police stand guard outside the Republican National Convention in downtown Cleveland on July 19.

A trio of protesters rest after marching against Donald Trump’s candidacy in Cleveland, on July 19. “Out here [in Cleveland], the only opportunity is given to those who are privileged,” says one, who is a local of the city.

On Tuesday afternoon, Allan Stansbery stood outside Jack Cleveland Casino with a handgun on his hip and an M16 assault rifle strapped across his chest over a tactical vest. The white 38-year-old member of the West Ohio Minutemen said he drove to Cleveland from Lima, Ohio, “to experience this and the people and to exercise my Second Amendment right.” Alongside Stansbery was Dan Stevenson, a smooth-spoken 35-year-old with trim, short hair and a graying goatee. Stevenson, who is also a member of the West Ohio Minutemen, had a rifle hanging by his side and ammo clips stuffed in his tactical vest. Stevenson was in Cleveland, he said, to “make sure every American citizen is safe and all cops are safe. To ensure the protests are peaceful and make sure everyone gets home safe.”

A few blocks away, Tambo, a lanky 30-year-old from the lower east side of Cleveland lay on the grass next to a Black Lives Matter protest. His shirtless chest revealed black tattoos, including a stitched heart and a spider web. As the protesters shouted about discrimination against Native Americans in the background, Tambo, who didn’t share his last name, smiled and said he was anti-government. He was there, on the streets, “standing up for freedom and liberty and being able to live in a country run by the country and not the corporate.”

Just over two miles from the Quicken Loans Arena, away from the “Make America Great Again” hats and “End Poverty Now” signs, native Clevelanders have been watching the convention from a distance — some with great skepticism. The neighborhood of Central, only a few minutes’ drive from the spectacle at Public Square, is reported to have some of the highest poverty rates for children in the city.

At a convenience store in the heart of Central, 36-year-old Sufian Abu Zahriyeh, a tall, first-generation Palestinian-American, is working on his distribution route. A long way from his birthplace in Brooklyn, New York, Abu Zahriyeh doesn’t trust the Republican politicians gathered downtown. But he’s more worried that one of his distribution route drivers was robbed at gunpoint that week. Abu Zahriyeh says he’ll most likely vote Democrat in the upcoming election. “I really feel that the Democrats care more about the little people.”

In a gas station parking lot outside the store Abu Zahriyeh was servicing, LJ Moorre, a 36-year-old African-American in an orange polo shirt and tan cargo shorts, says he’s frustrated with the Republican presidential nominee. “Donald Trump is the undertone of America that raised its voice.… [Trump] sounds like a baby Hitler.” Moorre pointed in the direction of the convention. “Hey, man, look at the world,” he said. “Look at Cleveland. All the money is downtown.”

Later that same day, Larry Cobler, 58, and his grandson Vince Cobler, 11, ate shaved ice as a mass of uniformed police officers rushed noted celebrity Alex Jones away from a small scuffle in Public Square. Cobler and his family are from Cleveland, and he said he brought his grandson downtown to see a little piece of history. When asked about his feelings toward Trump, the elder Cobler said, “I can’t even believe he’s here, because I can’t even believe he’s the nominee. I had to see the people [who] were responsible for him becoming the nominee.”

In a bar a few blocks away, Robbie Bourne, a tall, white, soft-spoken Army veteran, sipped on a Labatt Blue beer after a brief walk through the opposing protests in the streets of Cleveland. A self-described libertarian, Bourne served in both Iraq and Afghanistan. Bourne is still deeply committed to helping Iraq; if the United States were to send troops to help retake Mosul, he says he would most likely want to go back. But he is concerned about religious extremism and the possible transfer of those ideals into American society if the United States accepts more Middle Eastern refugees. Being from Cleveland, Bourne says he’s watched the campaign season with fascination; he believes that the 2016 election cycle is challenging people but it’s also exposing how easily manipulated they can be.

Bourne sat comfortable on his bar stool. “Through all this,” he said, “I think someone like me tries not to just stand on either side of the fence and throw rocks. I’d rather just see what I can do to help. I can’t change the world with a Twitter or Facebook post like some people tend to think. I just think it’s your interactions; there’s so much that a smile or a handshake can do.”

As the sun began to set on the second day of the Republican National Convention in Cleveland, swells of Trump supporters and their opposition hustled to the Quicken Loans Arena and toward the night’s protests outside the entry fence. Olu, a 70-year-old African-American from Cleveland (who did not give his last name), looked out over the crowds of people downtown. He was proud of his city, he said, for being in the spotlight. “I just want all this to turn out OK.”

Cengiz Yar is a documentary photographer and freelance photojournalist based between Chicago and Iraq.