The Turkish government has arrested or detained tens of thousands of soldiers, police officers, academics, and journalists in the wake of last month’s failed coup attempt. Some supporters of President Recep Tayyip Erdogan have a new target: a prominent Washington think tank.

The Turkish government has arrested or detained tens of thousands of soldiers, police officers, academics, and journalists in the wake of last month’s failed coup attempt. Some supporters of President Recep Tayyip Erdogan have a new target: a prominent Washington think tank.

The Woodrow Wilson Center, a nonpartisan organization founded in 1968, is facing a wave of criticisms over its alleged — and wholly unproven — role in orchestrating last month’s failed putsch, which killed more than 200 people and injured more than 1,000. Erdogan retained power and has spent the past weeks carrying out purges of institutions across Turkish society.

The accusations against the Wilson Center, appearing on the front page of mainstream newspapers linked to Erdogan, prompted the think tank to take the unusual step of issuing a statement of concern about “possible reprisals” to researchers and scholars that attended a July conference in Turkey organized by the think tank. The conspiracy theories against the Wilson Center were sparked, in part, by the fact that its July 15-17 event occurred on the exact same weekend as the coup attempt.

“The meeting, which took place on the island of Buyukada in Istanbul, was very much removed from the center of the crisis and had no connection to it,” the Wilson Center said in an unsigned statement Friday. “The discussion was an open exchange of views among seasoned foreign policy experts” about Iran and its relations with its neighbors, said the group.

But the think tank’s remarks do not appear to have lessened the proliferation of reports in Turkey blaming Henri Barkey, the director of the Wilson Center’s Middle East program, for the botched coup. On Saturday, a front-page story in the pro-government newspaper Aksam featured photographs of Barkey and other academics who attended the Wilson Center event. It accused them of being CIA agents who helped orchestrate the coup. 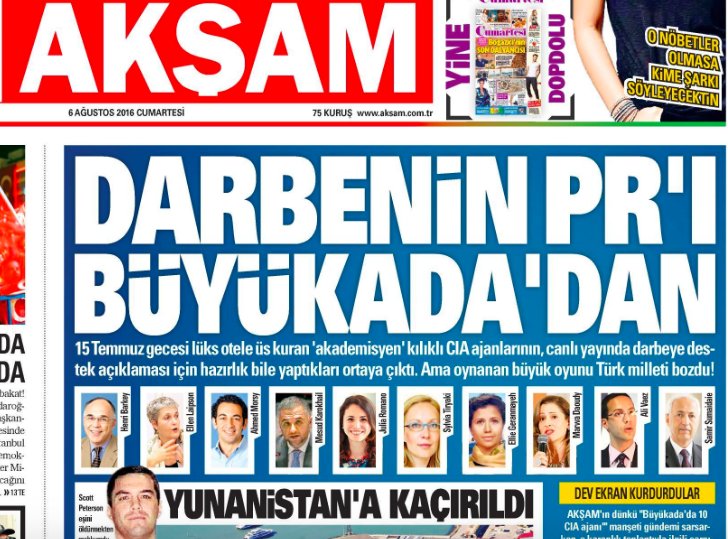 “Henri Barkey has been mercilessly hounded by the pro-Erdogan press,” Steven Cook, a Turkey expert at the Council on Foreign Relations, told Foreign Policy. “Turkish officials definitely need to do a better job [rebutting conspiracy theories], but they won’t. They are enabling these kinds of allegations and have no real interest in pushing back.”

Participants of the workshop are said to be facing a barrage of scrutiny from the media and Turkish authorities. Mensur Akgun, a director at the Global Political Trends Center which joined the Wilson Center in organizing the event, was interrogated by Turkish authorities in recent days. A female academic who attended the event was relieved of her job as a professor, according to one attendee.

The story also purports to show a photograph of Scott Peterson, a journalist invited to attend the event who is affiliated with the Christian Science Monitor. But instead of displaying his photograph, it shows the image of a different Scott Peterson, the man convicted of murdering his pregnant wife Laci Peterson in 2002 and currently serving time in a California prison.

“The only comedic part is they screwed up Scott Peterson, mistaking the CSM reporter for the murderer of Laci Peterson,” said Aaron Stein, a Turkey scholar at the Atlantic Council.

Officially, the Turkish government blames Fethullah Gulen, a Muslim cleric living in self-imposed exile in a compound in rural Pennsylvania, for carrying out the coup. But ever since the failed July 15 putsch, a range of U.S. actors have become the target of lurid conspiracy theories from  Turkish news outlets like the pro-government Yeni Safak newspaper, which also accused the CIA and Gen. John Campbell, a former NATO commander in Afghanistan, of trying to overthrow Erdogan.

In its statement on Friday, the center warned that accusations against its scholars could hurt Turkey’s international reputation.

“Turkey has long been an attractive location for scholarly meetings, in part because of the quality and caliber of Turkey’s academic and civil society institutions, and in part because of its natural beauty and convenient location,” said the think tank. “It would be a great loss to Turkey’s international reputation and to its contribution to global democratic civil society were Turkey’s own fine scholars to be excluded or at risk for participating in such valuable exchanges.”

What Caused the Blast in Beirut?