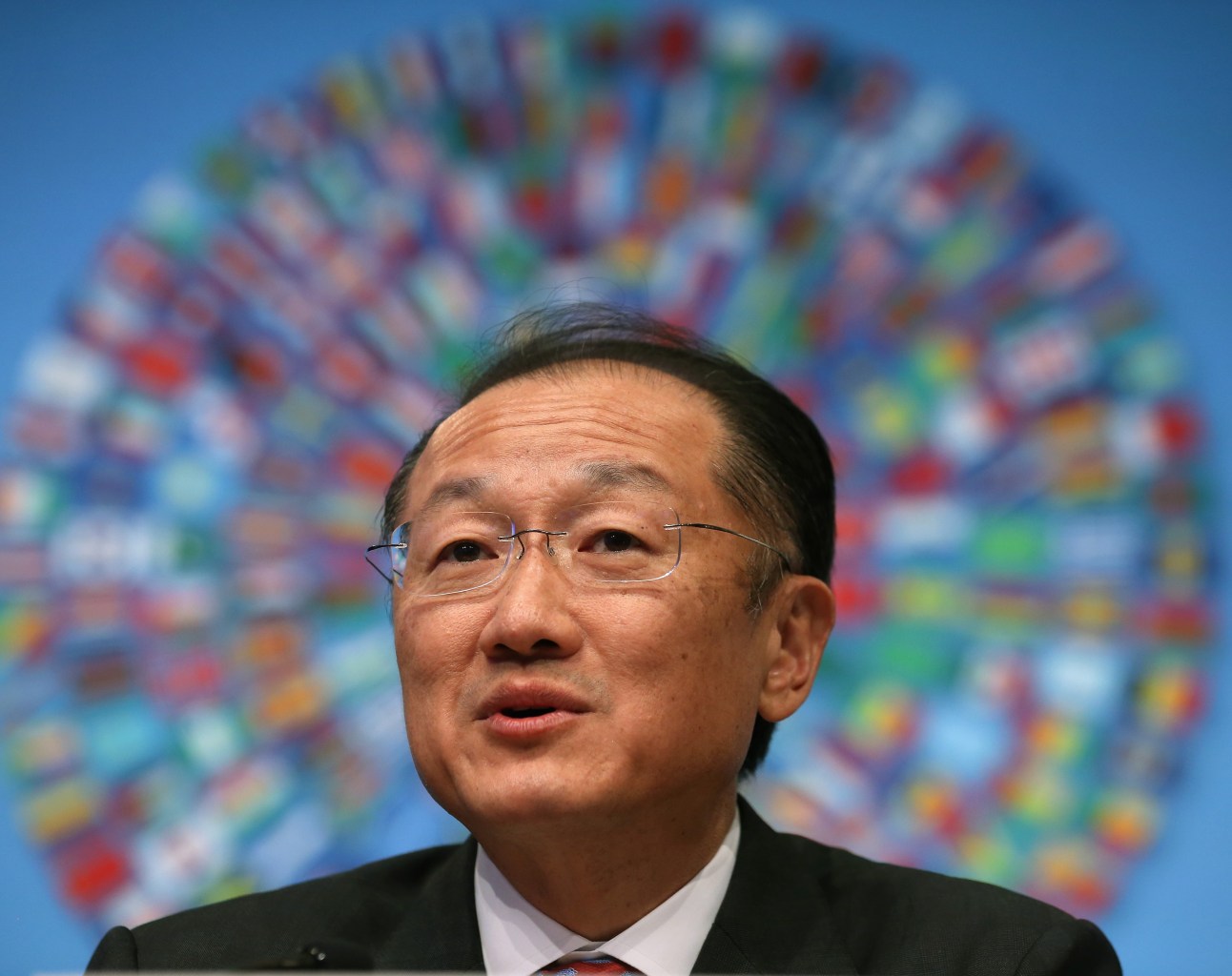 WASHINGTON, DC - APRIL 10: World Bank Group President Jim Yong Kim speaks during a media briefing at the IMF Headquarters, on April 10, 2014 in Washington, DC. Mr. Kim spoke about their agenda for the 2014 Spring Meetings and talked about the data revolution. (Photo by Mark Wilson/Getty Images)

“How the World Bank’s biggest critic became its president” by Andrew Rice, The Guardian

After years of working with the poor, Jim Yong Kim thought he could lead the World Bank to fight global suffering. Then the organization turned against him.

In his mid-30s and a recent graduate of Harvard Medical School, Kim had helped found Partners in Health, a non-profit organisation whose mission was to bring modern medicine to the world’s poor. The priest had been involved with the group in Boston, its home base, before serving in Peru, and he asked Kim to help him set up a clinic to aid his flock. No sooner had Kim arrived in Lima, however, than the priest contracted a drug-resistant form of tuberculosis and died.

Kim was devastated, and he thought he knew what to blame: the World Bank. Like many debt-ridden nations, Peru was going through “structural adjustment”, a period of lender-mandated inflation controls, privatisations and government cutbacks. President Alberto Fujimori had enacted strict policies, known collectively as “Fujishock”, that made him a darling of neoliberal economists. But Kim saw calamitous trickledown effects, including the tuberculosis epidemic that had claimed his friend and threatened to spread through the parish. 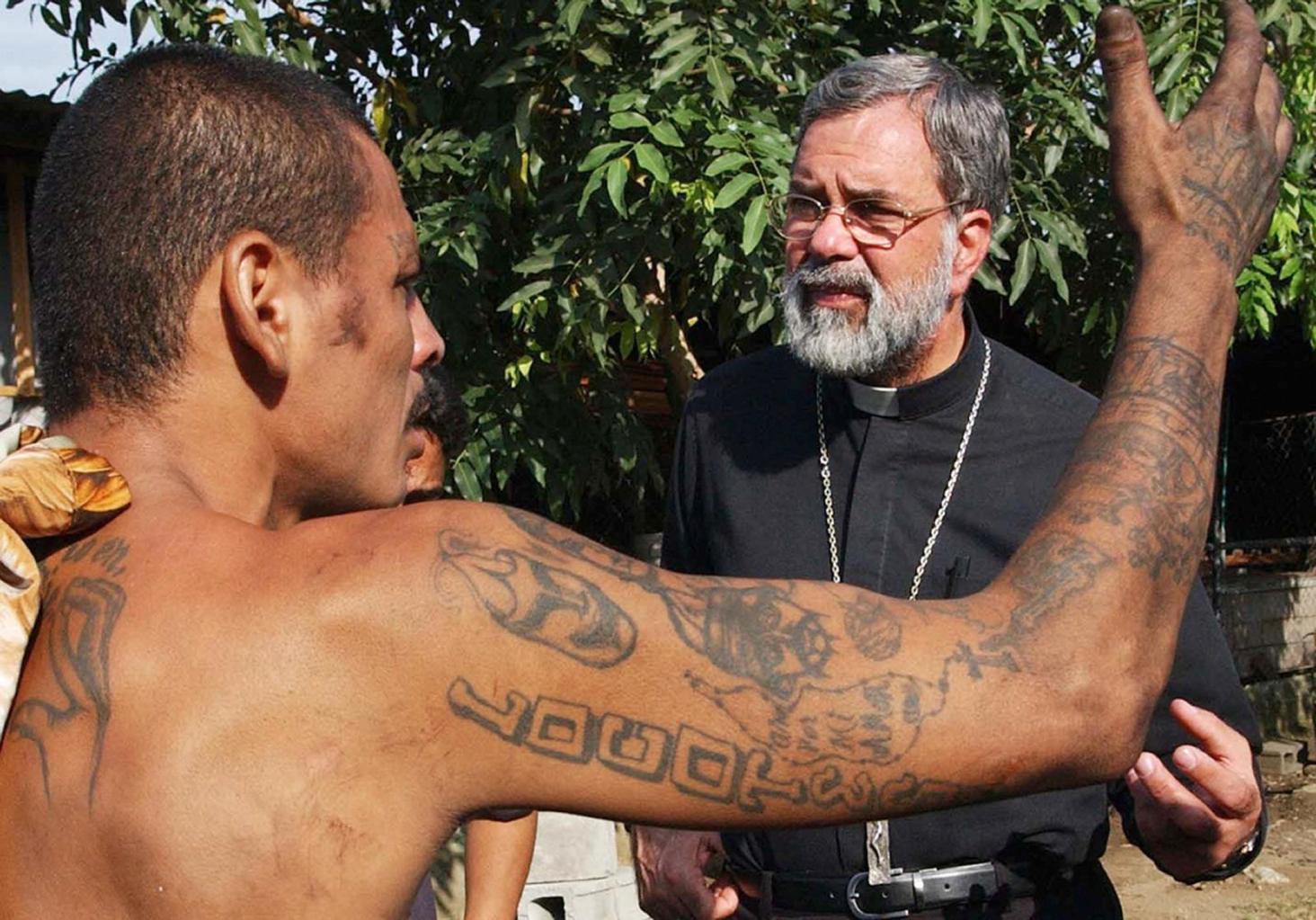 SAN PEDRO SULA, HONDURAS: Romulo Emiliani (R), Archbishop of San Pedro Sula, speaks with a member of the Salvatrucha gang in San Pedro Sula, Honduras, 26 March 2005. Violence from street gangs, known in the region as "maras," are considered the most pressing security issues in large cities in El Salvador, Guatemala and Honduras - countries which will take part in the Anti-Maras Meeting on April 1st, in Tegucigalpa. Many of the Central American gangs have members living in the United States, and during his recent visit to Guatemala, US Defense Secretary Donald Rumsfeld announced a possible increase in US aid for the fight against terrorism, drug trafficking and gang violence in the region. AFP PHOTO/Gerardo Mazariegos (Photo credit should read GERARDO MAZARIEGOS/AFP/Getty Images)

“How the Most Dangerous Place on Earth Got Safer” by Sonia Nazario, The New York Times

Programs funded by the United States are helping transform Honduras. Who says American power is dead?

She slipped on what looked like a black burqa, covering her from head to toe, along with rubber boots and black gloves. At the courthouse, she stepped inside a wooden mobile armoire with a one-way window, through which she could see out but no one could see in, and she was wheeled into court.

When she glimpsed the two men charged with the murder, anger welled up in her. She calmly laid out what she had seen, her voice distorted by a machine.

She had witnessed three murders, but this was the first time she had told anyone. Afterward, in the car, she beamed. “I feel liberated!” 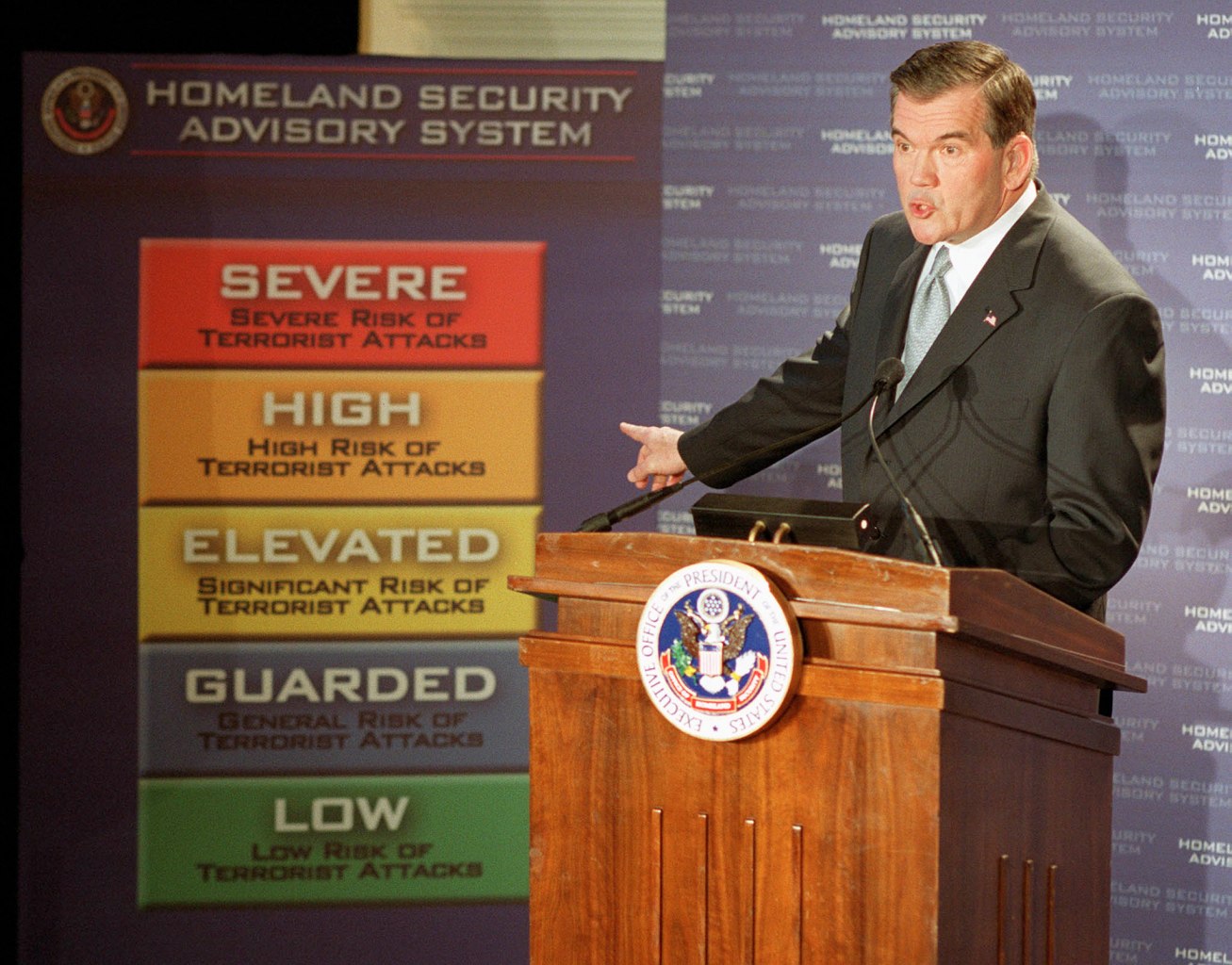 WASHINGTON, : Homeland Security Chief Tom Ridge points to a new color-coded US threat advisory system 12 March, 2002 in Washington, DC, which will allow the government and the private sector to deal effectively with threats of terrorist attack. The warning system has five levels starting with green, the lowest alert level, followed by blue, then yellow, orange and red, the highest state of alert. Each code will trigger specific actions by federal agencies and state and local governments. AFP PHOTO/JOSHUA ROBERTS (Photo credit should read JOSHUA ROBERTS/AFP/Getty Images)

“Is America Any Safer?” by Steven Brill, The Atlantic

Since 9/11, the United States has spent $1 trillion to defend against al-Qaeda and ISIL, dirty bombs and lone wolves, bioterror and cyberterror. Has it worked?

In April 2002, working as a reporter, I watched as a spirited band of new recruits got the TSA up and running at its first airport, in Baltimore. They timed passenger throughput, and high-fived each other when it stayed below four minutes per person. When the sun glared through a glass wall, killing the view of a carry-on-bag X‑ray machine, someone found a piece of cardboard to shade it. More high fives.

When I visited TSA headquarters five years later to discuss a business I was starting that would expedite prescreened passengers through the security lines, administrators and other back-office employees—who by now numbered about 5,000, in addition to the 44,000 screeners working in airports—had their own building, near the Pentagon. As I rode the elevator, two people with TSA ID badges got on. One groused to the other that his parking-space assignment was unfair. 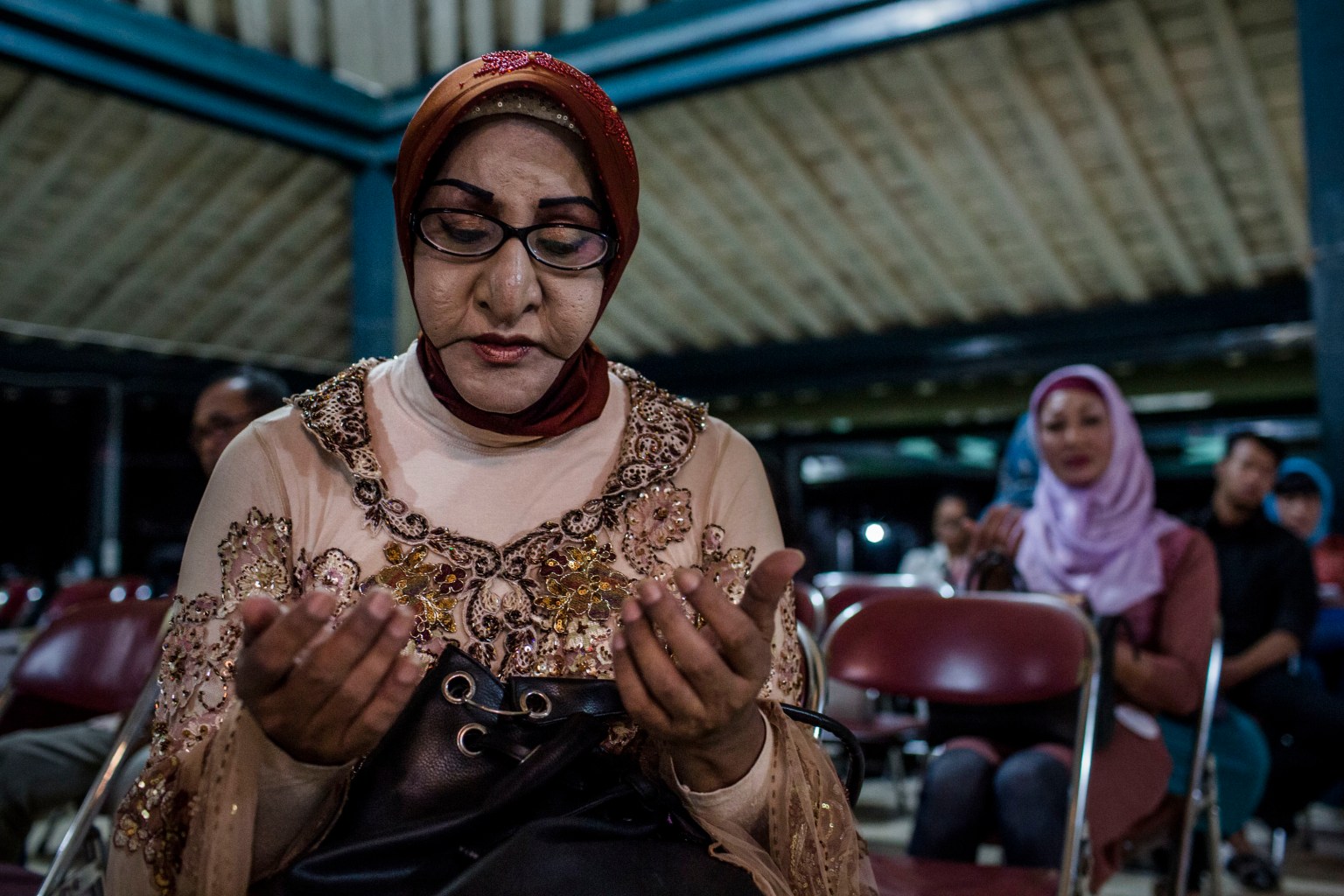 YOGYAKARTA, INDONESIA - AUGUST 12: Shinta Ratri, a leader of a Pesantren boarding school, Al-Fatah, for transgender people known as 'waria' prays during Syawalan tradition on August 12, 2015 in Yogyakarta, Indonesia. Syawalan tradition is recognized by the Javanese community as a part of religious traditions as celebrates after the Eid al-Fitr, as all sins forgiven to get back into the pure and clean. During the Syawalan tradition the 'waria' community gather to celebrates. 'Waria' is a term derived from the words 'wanita' (woman) and 'pria' (man). The Koran school Al-Fatah was set back last year's by Shinta Ratri at her house as a place for waria to pray, after their first founder Maryani died. The school operates every Sunday. Islam strictly segregates men from women when praying, leaving no-where for 'the third sex' waria to pray before now. (Photo by Ulet Ifansasti/Getty Images)

“The Piety of Shinta Ratri” by Kyle Knight, Los Angeles Review of Books

When militant Islamists attacked a transgender madrasa, they attacked pluralism itself.

I met Shinta Ratri 10 days after her life’s work had unraveled before her eyes. She quietly introduced herself as she fumbled to light a cigarette. The mood was different from six years earlier, when dozens of reporters had flocked to Indonesia, home to more Muslims than any other country, to profile Shinta’s unique creation — the world’s only Islamic school run by and for transgender women. In early March, we sat on a terrace to discuss how militant Islamists had forced her to shut down her beloved Al-Fatah Pesantren as an unprecedented anti-LGBT campaign across the country reached fever pitch.

Ibu Shinta, as she is called — “Ibu” is the Indonesian honorific equivalent of “Ma’am” — opened the Islamic boarding school in 2008 in Yogyakarta, a bohemian university city on Indonesia’s Java Island. Now 54 years old, Shinta has lived as a waria, or transgender woman, since she was 18 and, over time, came to know a network of other waria in the city.

“Fiddler on the Front Line” by Linda Kinstler, Foreign Policy

On the outskirts of Kiev, one rabbi is using the war in eastern Ukraine to revive a long-lost way of life: the shtetl.

The Ukrainian Jews pushed off their land often migrated to other villages and urban centers, under increasingly strained conditions. The turn of the century made life harder still. More pogroms, far worse than before, swept through Ukrainian cities in 1905, killing hundreds. And as vibrant shtetl culture became a thing of the past, the towns became associated in the public imagination with the villages from Shalom Aleichem’s stories: “dire straits, with … broken-down Jews, wooden huts, rotting shingles.”

Until now. The Anatevka shtetl is being rebuilt, this time as a home for Jewish internally displaced persons fleeing the ongoing war in eastern Ukraine. The settlement’s new founders are intent on bringing back a way of life that disappeared from the region long ago.